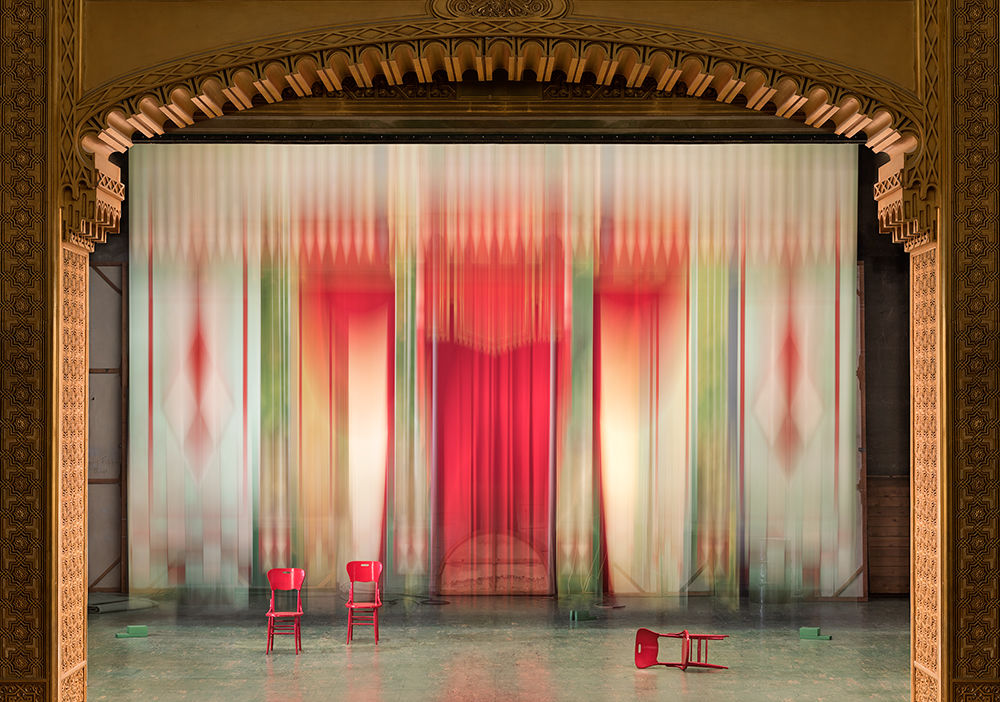 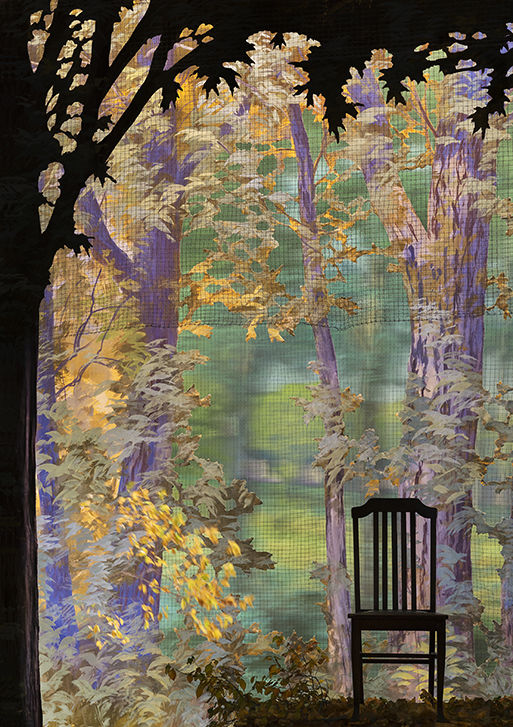 Jo Whaley: An Idea of a Forest, 2014, archival pigment print

Jo Whaley: An Idea of a Forest, 2014, archival pigment print

In the beginning of the 20th century, photographer and archaeologist Jesse Nusbaum documented the construction and early days of Santa Fe’s iconic Scottish Rite Masonic Center. The edifice, a Moorish-revival-style structure based on a gatehouse to the Court of Lions at the Alhambra in Spain, was designed by the architectural firm of Hunt and Burns after a rejected bid by architect Isaac H. Rapp, and construction was completed in 1912. But a side-by-side comparison between Nusbaum’s photographs, made from glass-plate negatives, and the rich images of contemporary photographer Jo Whaley, who has been shooting the temple since 2013 — the year it went up for sale — proves that little has changed inside the building over the course of a century. Whaley has two ongoing projects involving work at the Scottish Rite Center: One is historical, the other is more creative and makes use of a number of backdrops from the building’s theater, which is still used as a venue for lectures, ceremonies, and performances.

“In California, to support myself as an artist, I worked in theater,” Whaley, who hails from the Bay Area and now lives in Santa Fe, told Pasatiempo. “I did that for about five years.” Whaley’s experience included day jobs at the San Francisco Opera, the Berkeley Repertory Theatre, and other companies. In Santa Fe, she would take student groups to the center to photograph it. “I saw the backdrops that they have. They really needed to be documented in situ.”

The building, known to Freemasons as the “Santa Fe Lodge of Perfection” and to laymen as the “pink church” because of its startling color, is a meeting place for the Ancient and Accepted Scottish Rite Orient of New Mexico, an appendant body of Freemasonry. The Scottish Rite still owns the property after voting in 2014 to form a holding company to prevent it from being sold after it went on the market. “Obviously, the building’s no longer for sale, but I continued the project, and it just grew,” Whaley said.

Since documenting the painted theatrical backdrops, Whaley has been the principal photographer on a book project about the history of the building and Freemasonry in New Mexico. The forthcoming volume, slated for release in 2017 by the Museum of New Mexico Press, includes essays by state historian Rick Hendricks, Museum of International Folk Art director Khristaan Villela, and scenic historian and conservator Wendy Waszut-Barrett. “All these backdrops were painted around 1911, 1912,” said Whaley. “It’s unusual to have painted backdrops kept for so long. When I was painting for the opera, we would only paint the drops to look good for 25 years. We figured, by the end, they needed new styles. When I worked for Berkeley Repertory Theatre, we would just paint and then trash them right away. They would only be used for one production.”

The backdrops in the theater number about 72, according to Waszut-Barrett, and they were intended for use in Scottish Rite ceremonies. “Every Scottish Rite temple features a theater, since the main function of these structures is to provide a space to confer the degrees to the brethren,” wrote Villela in the article “More Orientalism in Santa Fe” (The Santa Fe New Mexican, Oct. 4, 2013). Whaley created a series of images she calls Stage Stills, included in the New Mexico Museum of Art’s Alcoves 16/17 #6, the sixth entry in the museum’s ongoing exhibit series. For the Alcoves shows, five solo artists exhibit their work for a period of seven weeks. The other artists with solo Alcoves exhibits opening Saturday, Dec. 10, are Chris Collins, Christy Georg, Jami Porter Lara, and Valerie Roybal.

“The show in the Alcoves is the free-form, creative response I have to the Scottish Rite Temple,” she said. “I’m looking at these backdrops for what they are, not what they were, and responding to them in a kind of ad-lib scenario, pulling props from around the building because they never threw anything out,” she said. Whaley runs the rigging to lower the backdrops one at a time and uses live models (sometimes herself) and props arranged in photographic compositions. “The theater is like a little jewel box, and it’s all of a piece. It’s like going back in time because it hasn’t really been altered,” she said.

Most of the drops were painted by British-born scenic artist and landscape painter Thomas G. Moses (1856-1934), who traveled the United States, painting scenery for theaters and Masonic temples. “The Masons have been a secret society for centuries, and I was allowed to work with a scenographer and photograph each backdrop,” said Whaley. “There’s 27 different scenes we set up, and we had Masons in costume and recreated the degrees and how the Masons used this particular theater. That will be in the book. As an artist, I originally just wanted to document the backdrops for the Masons and for the state of New Mexico, just to have it as a record. I made a deal with the Masons that if I did all that work, they would give me a location agreement to bring in my own models and props. Basically it’s like a studio for me. All my lighting gear is there. I just go there and work.”

The images in the Stage Stills series are a near seamless blend of models, props, and backdrops that at times look more like painted compositions than photographs, bearing traces of a fin de siècle, Orientalist aesthetic and a more modernist emphasis on absurdity. Flying Drop with Red Chairs is an exception. The foreground imagery, an arrangement of three chairs, is juxtaposed with a backdrop shot in a timed exposure as the drop was being lowered from above. The resulting image contrasts movement and stillness, as the blurred drop takes on the appearance of a translucent veil. Judging by the colors, the same drop seems to have been used for The Understudy, in which a figure enters from the right, face obscured by a golden pedestal she carries in her arms, and also for Missing Script, where a set of stacked black chairs is offset by the anachronistic presence of a black and red fire extinguisher. The emphasis is on stagecraft — Whaley presents what is normally behind the scenes from an audience perspective, giving it the import and presence imparted by the magic of theater.

Most of the drops depict scenes, such as ancient temples, lush draped interiors, and enchanted forest landscapes. Whaley’s photograph An Idea of a Forest puts one in mind of the art of stagecraft. The backdrop conveys the idea of a forest, but it is unrealistic, the stage being the arena for fantasy. The visible opera netting, along with the presence of a single chair positioned downstage, in front of the drop, negate the fantasy. A related image — The Actor’s View; Forest Scene — depicts another wooded backdrop from the vantage point of a performer on stage, providing a kind of negative view of the forest. The photo reaffirms the theater as the realm of illusion, a quality it shares with Whaley’s photography, which has directly inspired her work as a scenic artist. “The whole idea of theater is that you’re inviting the audience to have that suspension of disbelief and pretend with you. Theater is the beautiful lie that tells the truth.” ◀