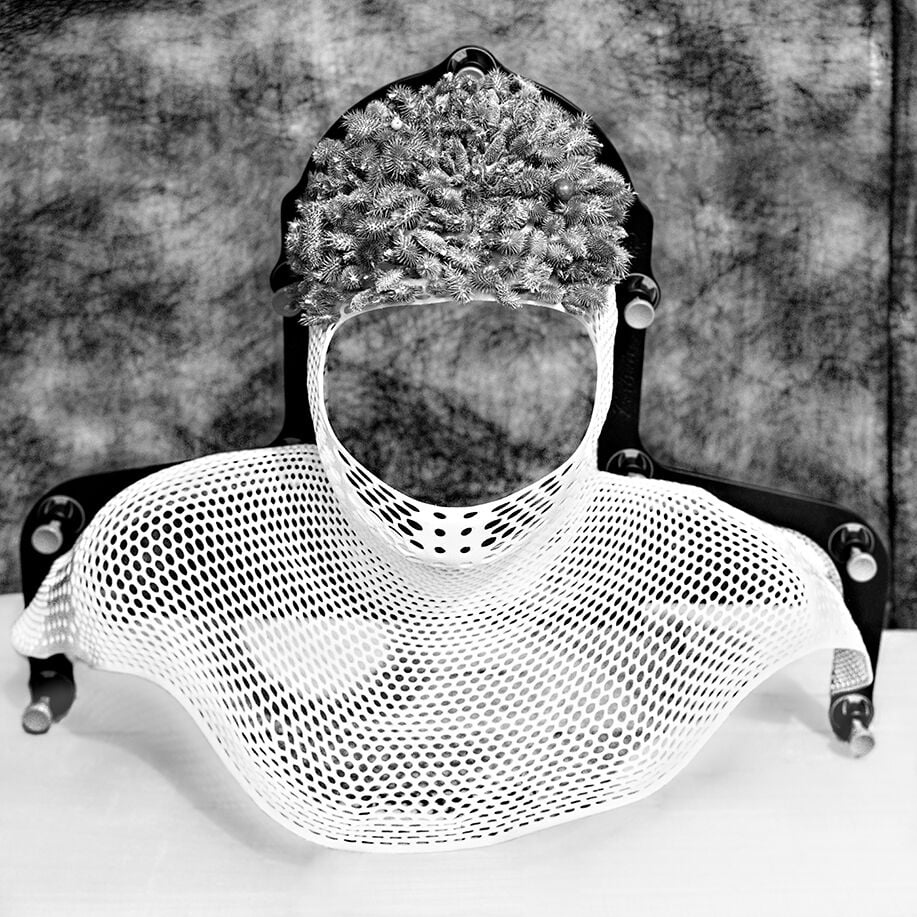 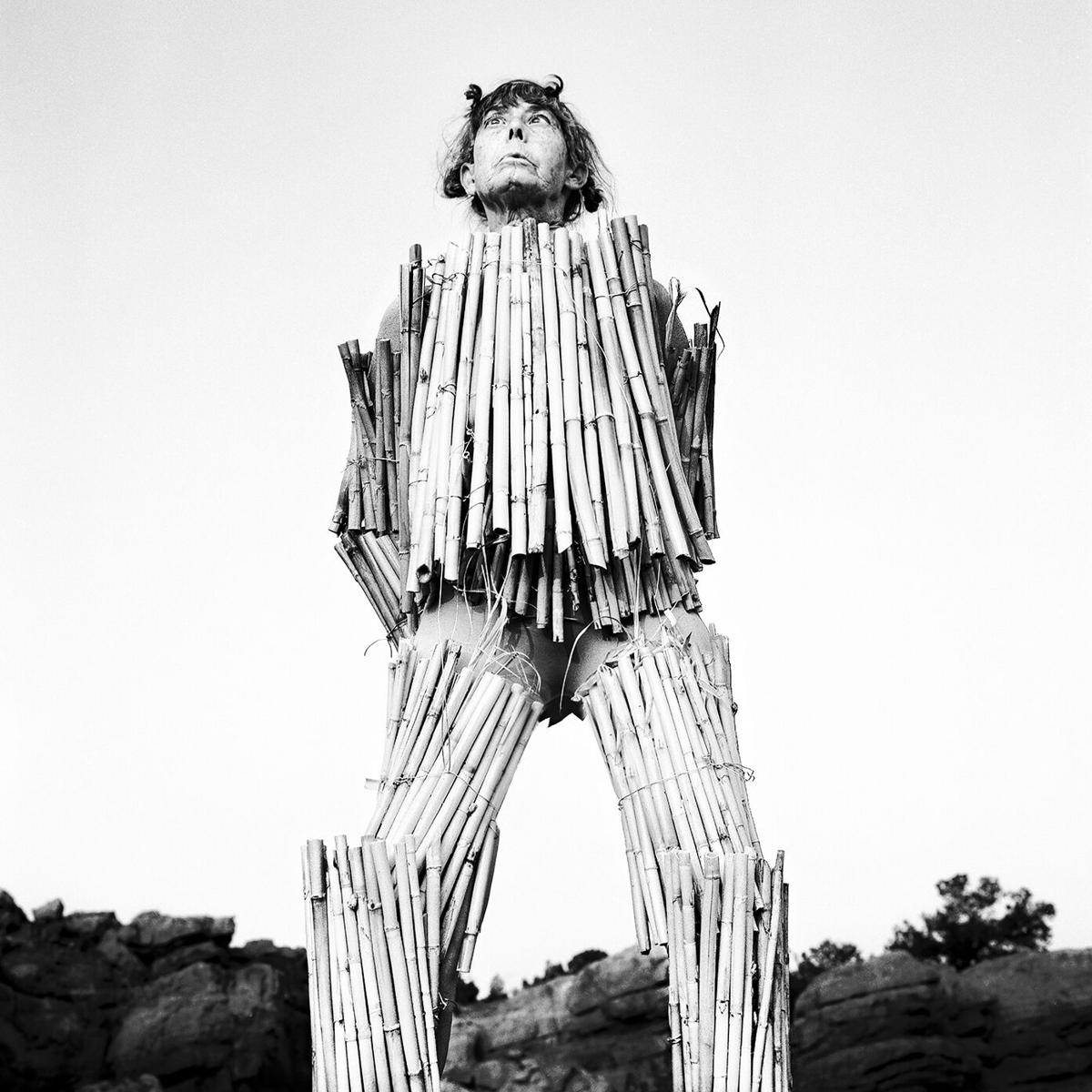 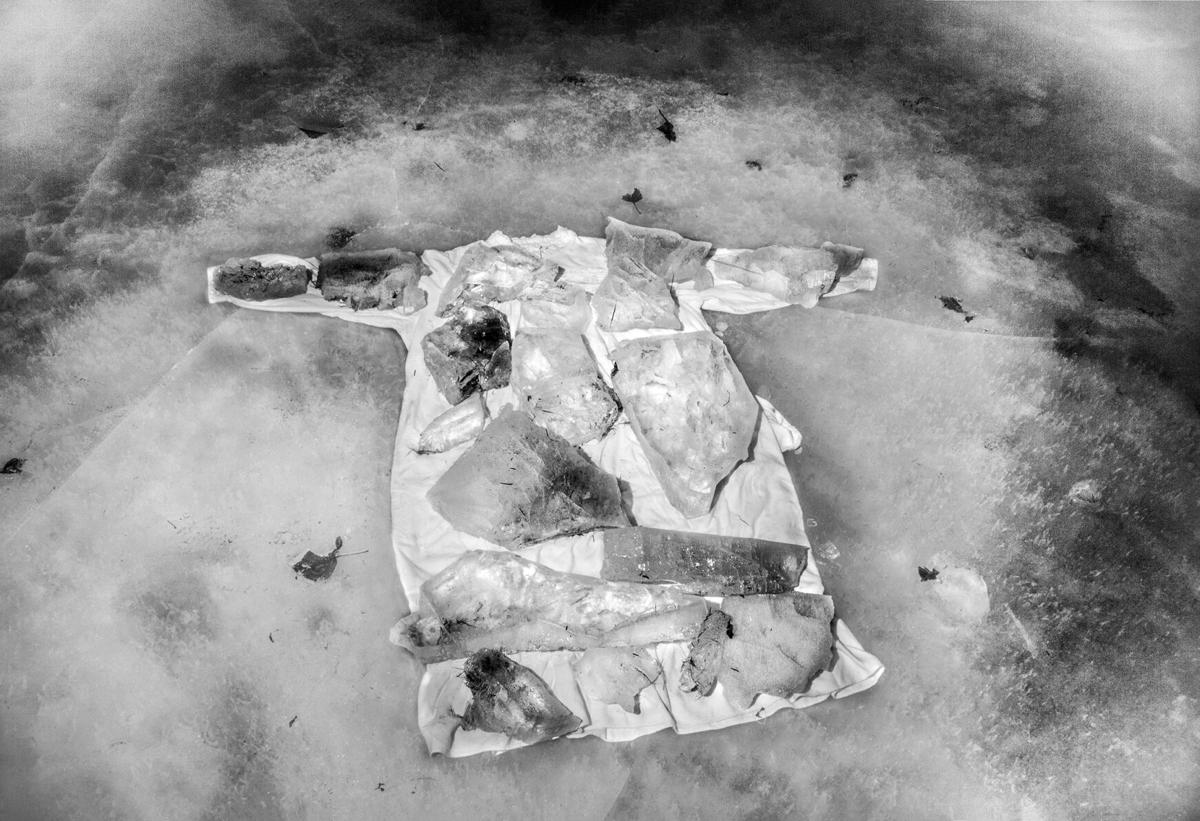 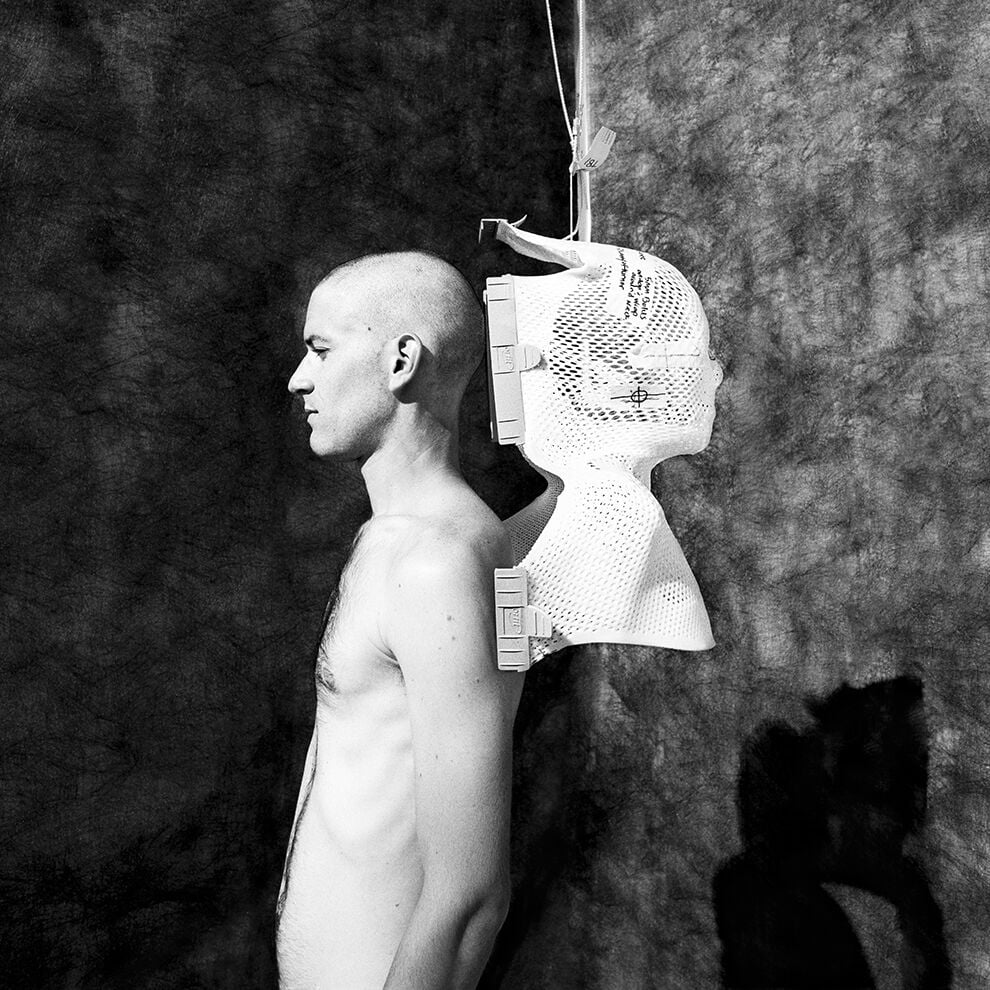 Burrs from a dried burdock plant frame the top of a radiation mask like a crown of thorns. The mask, a thermoplastic device of mesh construction, is used in the treatment of cancer patients. Custom-molded to fit the patient’s face, it keeps them immobile during radiation therapy. In the black-and-white photography of Andrés de Varona, it becomes something else: a kind of afterimage of the person who wore it, a hollow replica of the head and upper torso, but also a reminder of the medical condition he or she has endured and may or may not have survived. The radiation mask is a recurring motif in TRIALS, the second series made by the photographer, who uses it like a talisman, the same way he used his mother’s gown in his previous body of work, Contact, as an emblem of the departed.

Contact x TRIALS, de Varona’s first solo exhibition, is a dialogue between these two bodies of work. The first was created during the Cuban American photographer’s years-long obsession with death, which he channeled into a creative project using members of his family as models. The second is about the struggles we all face in life, the pain with which we live, collectively and individually, and which marks much of our time on Earth.

“This whole project started with a photograph that I took of myself in 2016,” says de Varona, 24, whose exhibition opens Friday at Vital Spaces’ Midtown Annex. The photograph, titled Catalyst, shows de Varona enveloped in wet fabric, like an unborn child struggling against a constricting membrane. “I took this without really knowing what this body of work was going to become.”

His mother, Marilupe Ortiz Travieso, suffered from an autoimmune disorder. She died while de Varona was a student at Indiana University in Bloomington. A native of Miami, where his family still lives, he struggled in the aftermath of her death with a feeling of being “in between.”

“I felt isolation, but I also felt relief because I was so removed from it,” he says. “I wasn’t living in the house where my sisters were living and having to deal with that emptiness, that sense that there’s somebody missing. I felt good about being away from that, but I also felt bad because I wasn’t there with the family.”

Her death haunted him. The simple white dress she purchased just before she died, which she never had the opportunity to wear, became, at once, a symbol of her absence and her presence. He conscripted his sisters — Veronica Lucia, Claudia Guadalupe, and Cassandra Alexis Travieso — to model for him in a series of surreal images, many of them featuring the dress. In one, it hangs spectrally from the ceiling, covering the head of a female figure like a shroud. In another, it rests flat on the ground beneath chunks of ice, as if some futile attempt was made to preserve Marilupe’s non-corporeal spirit.

“It became a relic for my sisters and I,” says de Varona. “I spent like three years on this project, just being in this headspace of wanting to create.”

Staging photographs with family members and the dress became a series of ritual ceremonies, a way of coming to terms with the death of a beloved matriarch. His sisters became his collaborators and not just his subjects. “A lot of the ideas for the rituals would come from our own navigation in our family structure. With my mom passing, everyone was figuring out their new place in the family, new duties, new responsibilities. A lot of things were changing, and these photographs were based off those changes.”

But they were also about bridging a divide between life and death.

“The idea of inviting death back into the home space was a very important topic for me. Death is something that’s so removed, at least in Western culture. In America, death is very clinical. I believe it’s kind of rare to really witness someone passing or to be with someone as they’re passing on, in the same space, the same room.”

Originally, de Varona was calling the project Understanding the Familiar. He changed it to Contact in late 2017 or early 2018 when he started thinking of the images as less about grieving and loss and more about proximity to family, living and dead.

“The idea of Contact came from all of us being physically close to one another, and in silence, often in a dark space. All our thoughts were most likely the same, passing through memories of what our family used to be, and what it’s going to become now. It was us also reaching our mother.”

When de Varona moved to New Mexico in 2018, he intended to keep the project going. After earning his university degree in photography, he came out to participate in Center’s annual photography portfolio review, Review Santa Fe, and with the intention of making a permanent move, site unseen.

“There’s a lot of darkness here, and a lot of spirituality, and things like that,” he says of New Mexico. “I thought it was a very interesting environment to do this work in, but it totally didn’t go as I expected.”

No. Instead, de Varona found himself invigorated by a new preoccupation with life. He was seeing the pain of others, how they live with it, and how they persevere.

De Varona ended up renting a room near La Cienega, south of Santa Fe. At a nearby Allsups gas station and convenience store, he met two brothers from Kewa Pueblo who lived in the area and were dealing with substance abuse issues. One of them suffered from a chronic inflammatory condition, possibly gout. He started photographing them, documenting their lives. But soon, the project morphed into a more strategic, second conceptual body

“Philosophically, I began thinking about how the absence of conflict and the absence of trial is death, really. There’s a big sense of struggle and pain in life. I think that’s just part of existence.”

“She has the youngest spirit of anyone I’ve ever met,” he says of Refiman, who’s in her 70s. “I’ve never seen somebody her age jumping fences and building with us. She’s incredible.”

Now, with a new team of subjects-cum-collaborators, de Varona embarked on TRIALS, the counterpart to Contact. The high desert became his studio. On a property belonging to Reifman, they constructed an outdoor photography studio using eight 10-by-10-foot panels, which could be rearranged into a number of configurations.

It wasn’t just about photographing, however. De Varona wanted to use the creative space as a way to connect with people.

“I wanted to create a room and bring people who are having their battles in life into a space where we can de-compartmentalize all of our stories, share with each other, and just acknowledge one another.”

He calls this space The Refuge.

There, in a pit dug into the earth, he shot Reifman from behind, her muscular form climbing out of the hole. It’s an image of strength and perseverance, of breaking through from one place into the next. He shot a self-portrait in profile while standing back-to-back with the radiation mask. One, a living human being, looking out in one direction. The other, the ghostly image of a former life, facing its own direction. In much the same way, Contact and TRIALS serve as point and counterpoint, coequal yet contrasting bodies of work. ◀

Opens at noon on Friday, April 16; through April 30