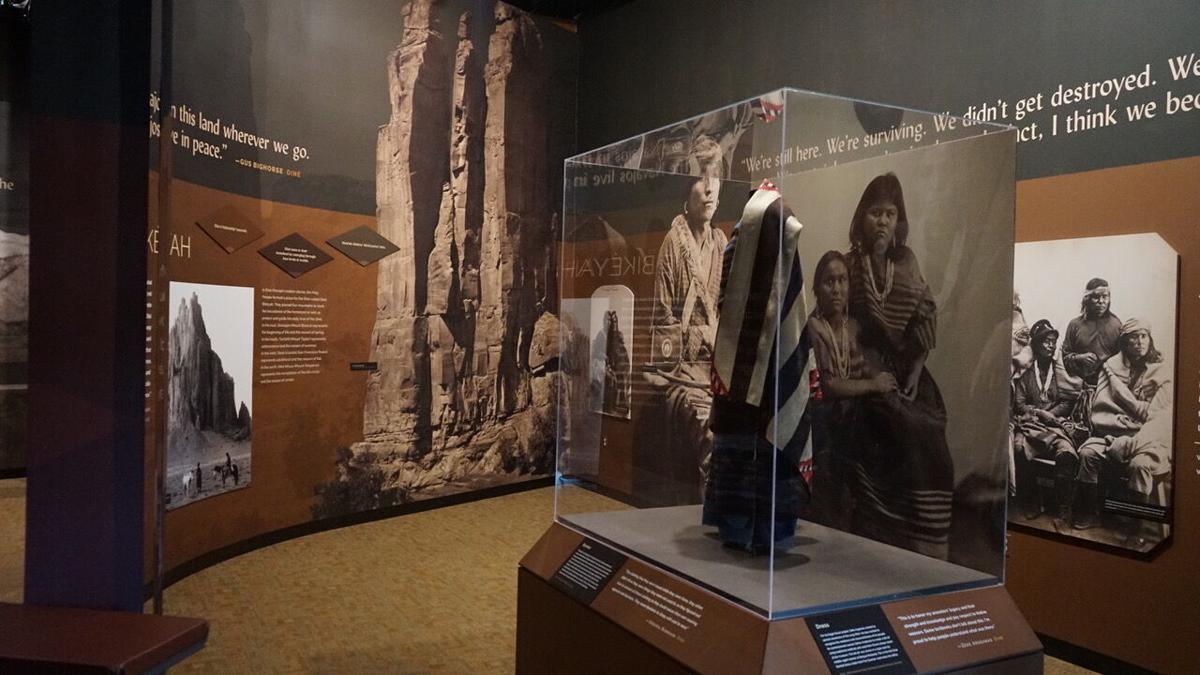 A view of the Diné (Navajo) homeland just before the forced marches, or The Long Walk, to Bosque Redondo 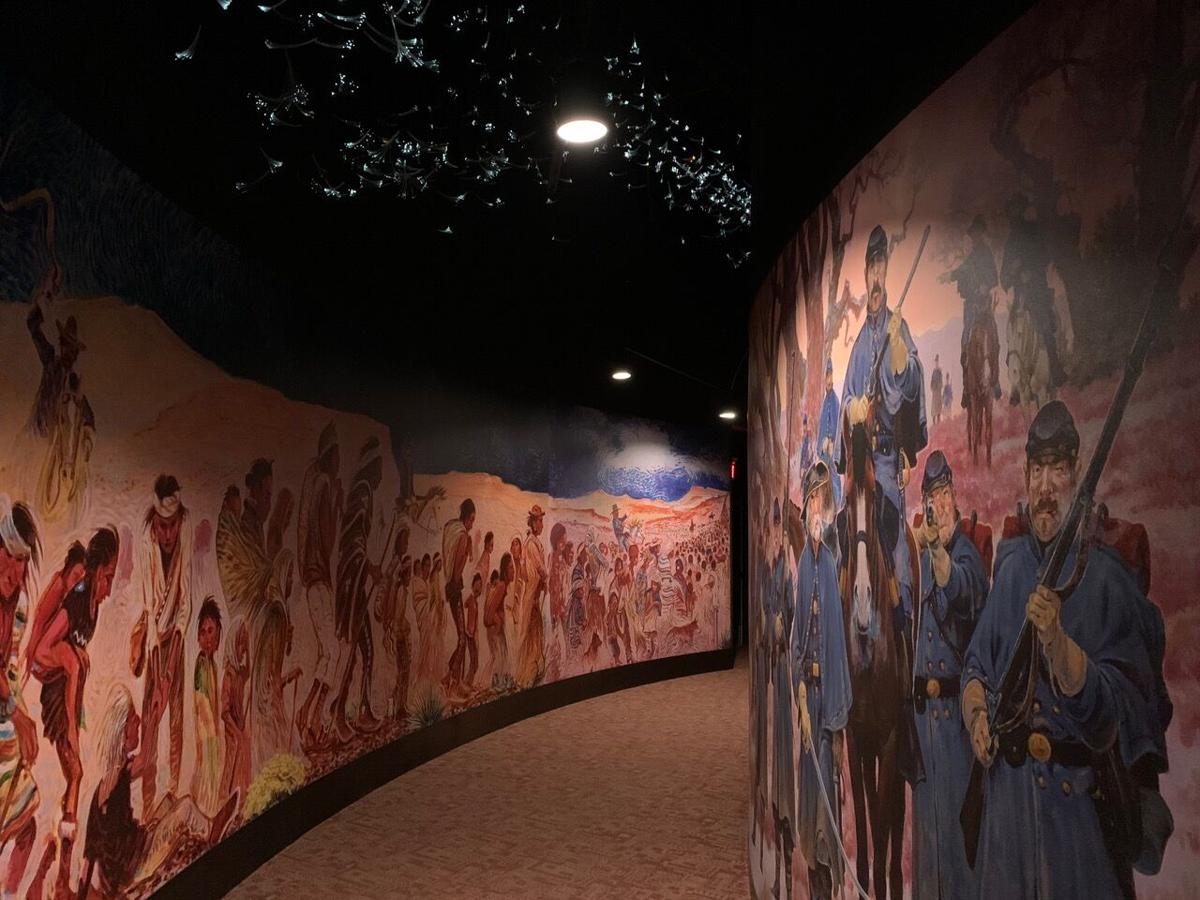 The Long Walk hallway featuring a sculpture with 10,000 fiber optic lights representing the individuals who made the marches 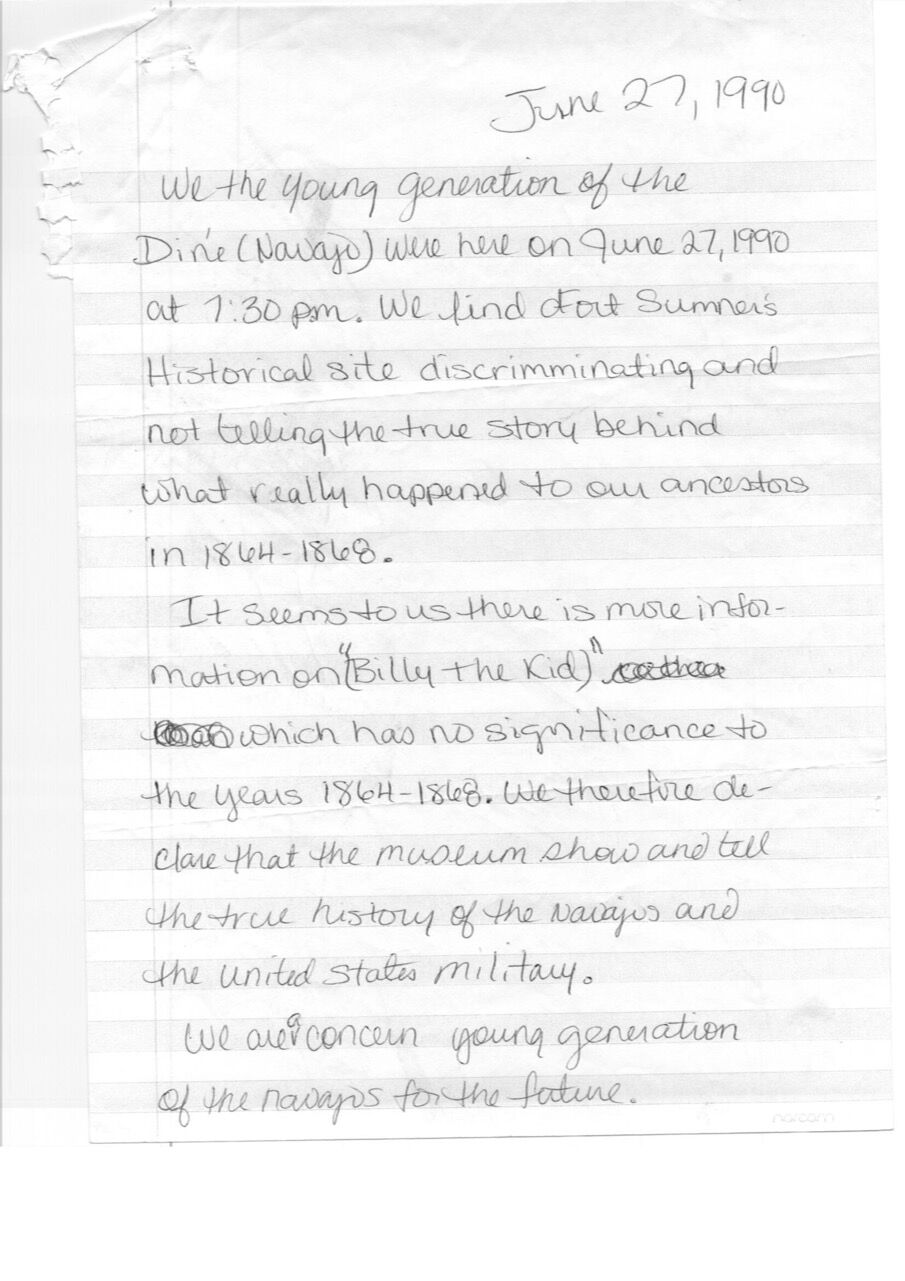 The first page of a copy of the letter Diné youth left at Fort Sumner on June 27, 1990, demanding the state of New Mexico “show and tell the true history of the Navajos and the United States Military”

In 1863, the U.S. Army began forcing the Navajo and Mescalero Apache peoples onto the Bosque Redondo Indian Reservation at Fort Sumner in eastern New Mexico. The Mescalero were nomadic hunter-gatherers who were miserable living in one place and expected to grow crops. The Navajo were marched more than 300 miles from their native lands, on what is known as The Long Walk. Thousands of people suffered and hundreds died. They arrived to find inhospitable soil and unsanitary conditions. The crops failed year after year.

In 1865, most of the Mescalero Apaches ran away from the reservation. In 1868, the U.S. government signed a treaty that allowed the Navajo to return home. The Navajo secured an allotment of seeds, cattle, tools, and other materials, but other terms weren’t as favorable. They agreed to compulsory schooling of their children and to not interfere with railroad construction through their land.

Fort Sumner was a military fort in the New Mexico Territory constructed in 1862. It was declared a New Mexico State Monument in 1968. Visitors encountered information about fort life and Billy the Kid, but only saw oblique, biased-sounding references to what was done there to Native Americans. In 1990, a group of Navajo high school students left a note, asking why their ancestral trauma had been erased from the historical record. The letter landed in the New Mexico state legislature and inspired an initiative to create a proper memorial.

The Bosque Redondo Memorial opened in 2005, but it was just a building. Historical information was limited to a few storyboards. There was talk of a permanent exhibition, and over the next 10 years different plans were created and abandoned. “It wasn’t the best approach. Tribal members were asked to sign off on exhibits [the state government] had developed. If anyone was talked to [in the planning stage], it was people that the state thought would be knowledgeable,” Roth says.

In 2016, they started over. The state government asked the tribal governments to select their own representation and to be involved in the process from the beginning. Roth says that the resulting exhibit emphasizes how the experience of Bosque Redondo harmed the Navajo and Mescalero Apache cultures while also showing the resilience of those cultures.

“Every aspect of the exhibition reflects a partnership. The story is being told from the perspective of the people most affected by this history.”

A Place of Suffering … A Place of Survival is driven by storytelling and oral history, with audio components in Navajo, Chiricahua Apache, and English. “A lot of people come to museums, and they want to see stuff, but that’s not what this space is about,” Roth says. “We were very deliberate about the objects that were chosen. For instance, you see a [Mescalero Apache] burden basket. It was made in 2020. Right behind the basket, you see an image of a burden basket from the early 1900s, the same type of design. We want people to realize that these things happened to these communities, but they’re still carrying on their traditions.”

Roth says a Navajo student raised $3,500 to commission a weaver to make a dress in a style popular in the mid-19th century, using wool shorn from sheep currently living at the historic site. “Draped over the dress is a chief’s blanket, on loan from Navajo Nation, believed to be woven here in 1868, the year the people were released.”

He calls the exhibit a powerful space that makes the history clear and balanced. One of the galleries, called The Treaty/Escape Room, houses a touch-screen display of the 1868 treaty between the Navajo and the U.S. government that you can hear or read, section by section, to really understand how each portion affected the Navajo people. The exhibit’s eight galleries are complemented by a ninth room that is for viewer decompression.

“That space is very neutral, designed in earth tones,” Roth says. “What we’ve noticed over the years, even when we just had panels on the wall, is that the pain people feel here is as if it just happened yesterday. We needed a space where people could sit, rest, and contemplate.” — Jennifer Levin