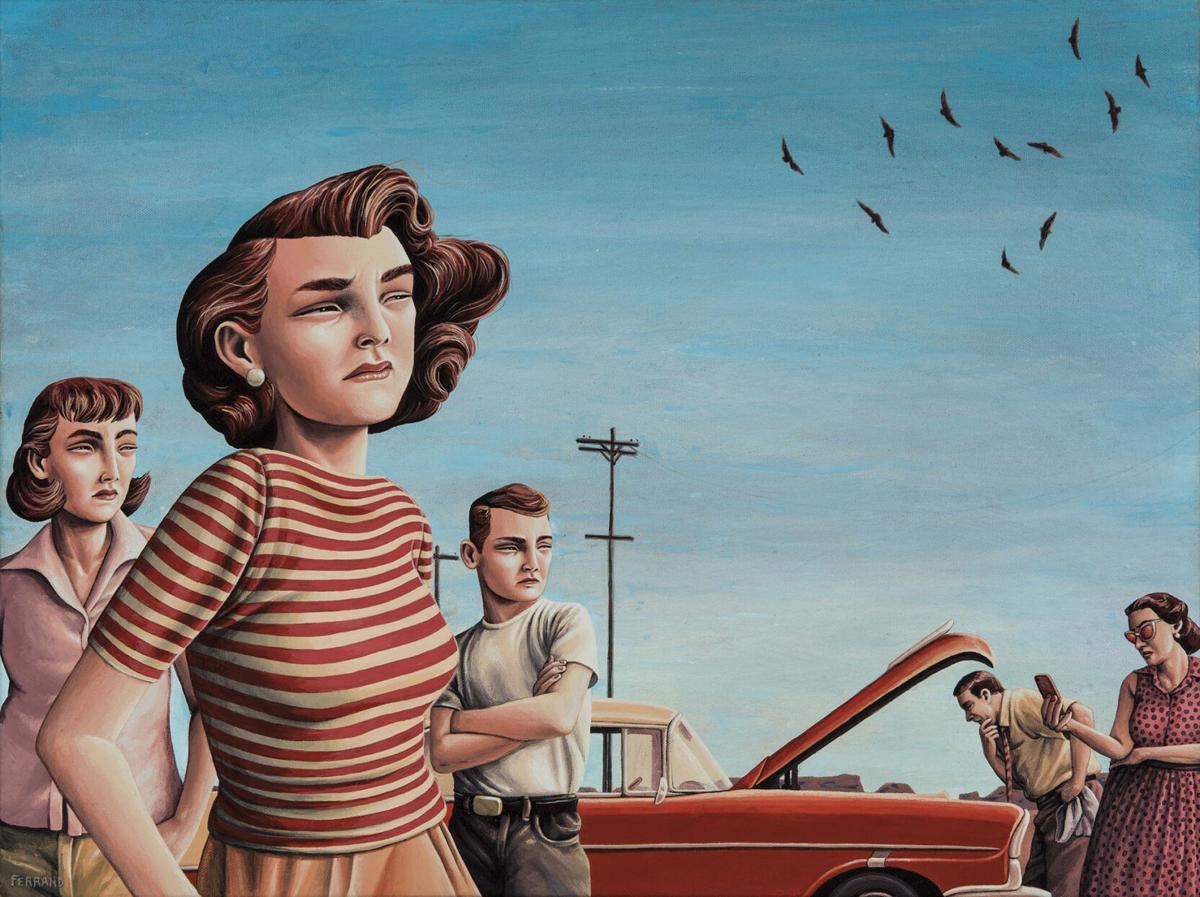 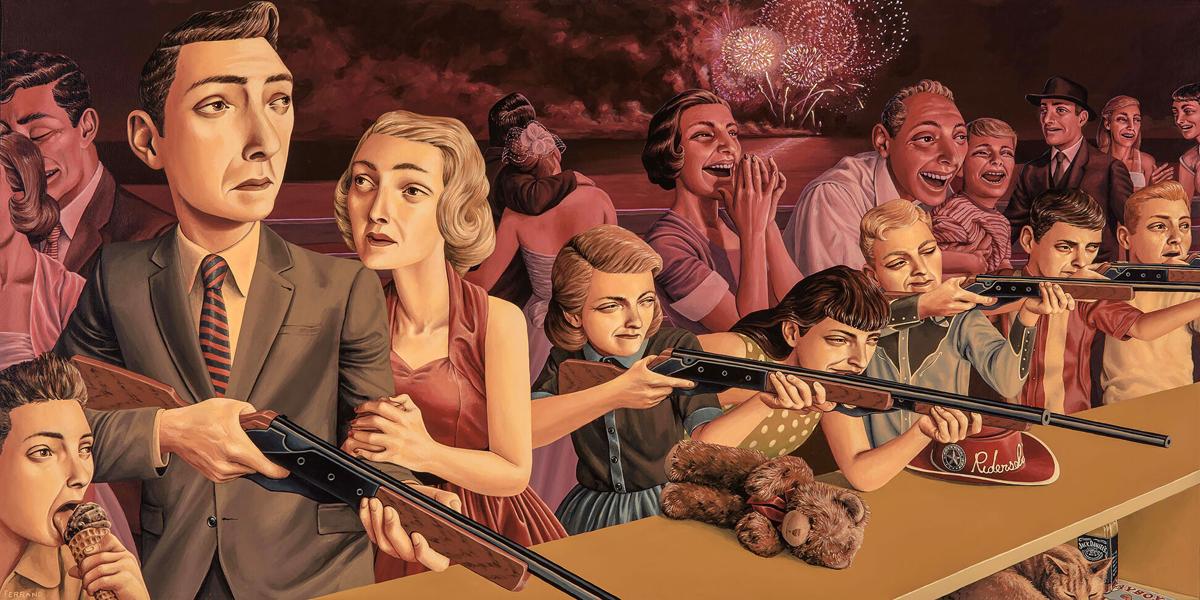 Nothing Lasts Forever (and that's okay) (2017), acrylic on canvas

Nothing Lasts Forever (and that's okay) (2017), acrylic on canvas

Four people have just emerged from an elevator where five more remain, perhaps waiting for it to transport them to another floor. The paths of the foreground figures in the painting I’m Not Really Here (2019) diverge as each is bound for a different destination. They avoid eye contact. One of them gazes sullenly at her cell phone. Another, his eyes directed downward, raises the collar of his overcoat, perhaps due to a chill, and another, also looking down, adjusts the position of his fedora. They’re disinterested, detached, lost in the interiors of their minds. The same is true of the figures still occupying the elevator. One appears to be lost in thought as another one looks down, and another looks up. They don’t look at one another. They’re all avoiding any sort of interaction with the others in their midst.

The painting, by Washington, D.C.-based artist Gregory Ferrand, could serve as an illustration of existential angst. Surprisingly, the most vibrant color tones are reserved for the red-tiled wall of the bank of elevators. The people are rendered in muted tones as though some common dread has drained them all of their vitality.

But something in the choices Ferrand makes — like the man in a fedora and one in a flat cap — lends an anachronistic feeling to the scene that’s at odds with its signifiers of the contemporary, such as the presence of the woman on her cell phone.

Or perhaps it isn’t odd at all. While many of Ferrand’s paintings seem to depict a time long past, specifically 1950s America, he often includes markers that suggest otherwise.

“I heard a lot of stories about the late ’40 and ’50s, this nostalgia for an era that was supposedly so great,” says Ferrand, 46, who’s represented in Santa Fe by Evoke Contemporary (550 S. Guadalupe St., 505-995-9902, evokecontemporary.com). “I have always — at least stylistically, in terms of fashion and architecture — been interested in that era. But I’m also interested in the things we sort of hide from people, that in some ways obstruct the possibility of real connection, at least on a stereotypical level of what society promotes: this prescribed idea of how to be. You see parallels between that era and this one still. It’s not like those ideas are gone.”

While the scenes that Ferrand depicts are often commonplace on a superficial level, the sense that something profound is happening beneath the surface is inescapable. There’s always a subtext, or a narrative being suggested, and it’s one that speaks of alienation, estrangement, and isolation.

Even in a typical family scene, like the one depicted in Sheltering in Place (2019), each figure — a mother, a father, and two young boys — is in a solitary world of his or her own, and no interaction exists between them. The father, in his easy chair, is absorbed by the screen on his cell phone. The mother yawns, an open laptop resting on her thighs. One child is reading a storybook while the other is placing a vinyl record on a portable phonograph. Even the family cat is preoccupied, gazing out the window at a winter storm. They’re together but apart.

“All these things that divide our attention, like technology, take us away from our present, physical space,” Ferrand says. “One of the downsides of technology is the difficulty it causes in making that real connection.”

Ferrand is a realist painter, but he doesn’t strive for photorealism. His figures almost seem sculpted or plasticine. But it’s that very air of unreality that gives them an archetypal power. Each figure is an individual, distinct in features from the next, but also anonymous. And that gives the viewer an inroad to the narrative.

“I want to create something that people can relate to on some level,” he says. “But I also don’t want to paint a photograph. I do enjoy painting things that look real; I like the technique of it. But I’m also trying to transmit a feeling. Maybe, because it’s not quite real, it makes it easier for many people to connect with it.”

As an artist, Ferrand’s painting evolved as a way of saying something about our present-day society. And he started along the career path of a painter soon after an extended trip to Buenos Aires that he took after graduating from Virginia Commonwealth University in Richmond, Virginia, in 1997.

“Early on, I was drawn to comic books and animation. My dad had a big collection from when he was a kid. I found it when I was in fourth grade. Then I started going to my local comic book shop. I would create charts where I would copy the noses and eyes from different angles. Then I could take all these features and make my own characters. I think what happened when I went to Buenos Aires was I was reencountering that love for drawing and telling stories.”

In college, Ferrand, who’s mostly self-taught, thought that he might become a sculptor. But the linear narratives he hoped to express found disfavor among a staff that promoted more expressive, abstract styles of art. He found himself at odds, too, with his professors in his beginning painting courses, who favored abstract expressionism over more representational work.

“I specifically remember a friend of mine, who’s actually a really good painter. He did paintings that were more representational, but he did much worse when grades came around than those of us who did work that was more based on intuition. It was not encouraging for those of us who might have been interested in that area. That’s one of the reasons I never went in that direction there.”

Instead, Ferrand graduated with a degree in English and found work in Buenos Aires teaching conversational English to businesspeople.

“I chose Argentina because I thought I would actually go backpacking from Tierra del Fuego, which is the most southern tip of Argentina, all the way back to the United States. Then I switched back to staying in one place to get the know the culture, the people, and the language well. When I first went down there, my return ticket was for six months later. I just kept on extending my stay, because it was never long enough to really feel like I experienced the place.”

Although Ferrand draws on a wide range of influences in his practice, including comics, period fashion, and work of Mexican muralists, it was an illustrated journal he kept in Buenos Aires, where he would record his daily impressions of people and places, that rekindled his childhood love of drawing.

When he returned to the Washington, D.C., area in 2000, he devoted himself to painting.

“I had this really terrible urge to make something that connected with people — I just didn’t know what or how. It’s been a long road, figuring out how to paint and put together a story that’s interesting visually.”

The emotional content of his painting is part of what makes his work relatable, particularly in paintings dominated by a central figure. In Oh What a World! (2018), the painting depicts a young boy, wiping tears from his eye while sitting on the grass by his fallen bike. His knee is scraped up from an apparent mishap. The legs of two adults, one male and one female, are standing within close proximity. Their presence may be due to concern for the injured child, but he seems far away, as though you can read the word “escape” on his face. One almost senses disapproval in the stance of the adults. The narrative isn’t clear. Nor is it meant to be.

So, too, the female figure in We Had Different Plans (2020), an almost dreamlike evocation of a woman gathering firewood in a winter forest bears the solemn expression of someone far away. The figures in Ferrand’s paintings rarely seem to be looking at anything in their immediate surroundings; rather, they turn their gazes inward, perhaps to some ideal place, some vision of the life they wish they were living instead of the one they’ve been dealt. In fact, I’m Not Really Here could almost serve as the title for a number of his works.

But if they’re not here, Ferrand isn’t saying.

“There are parameters I’m putting in place, through the composition or through the details, which are sort of like breadcrumbs that guide the viewer to some sort of idea,” he says. “The titles are pretty important, too. They’re not necessarily telling you what the painting’s about but maybe raising questions that only you can answer. It’s the same with music. The best music is the music that we find is important to us at particular moments of our lives. Probably, if you were to talk to the musician, the meaning that we put on to the music has nothing to do with what the musician was thinking when they came up with it. It’s the feeling being evoked by the music that’s special.” ◀