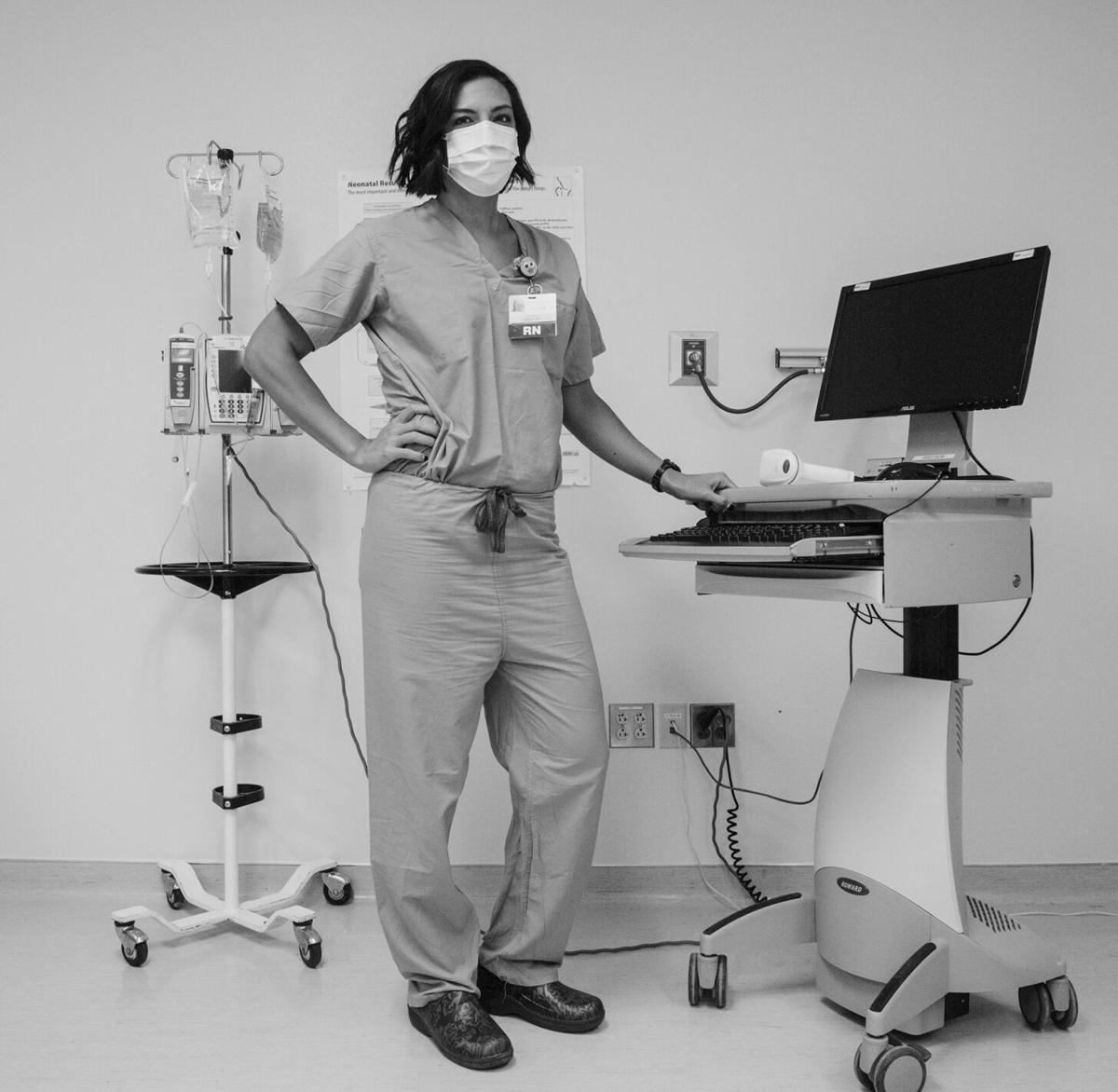 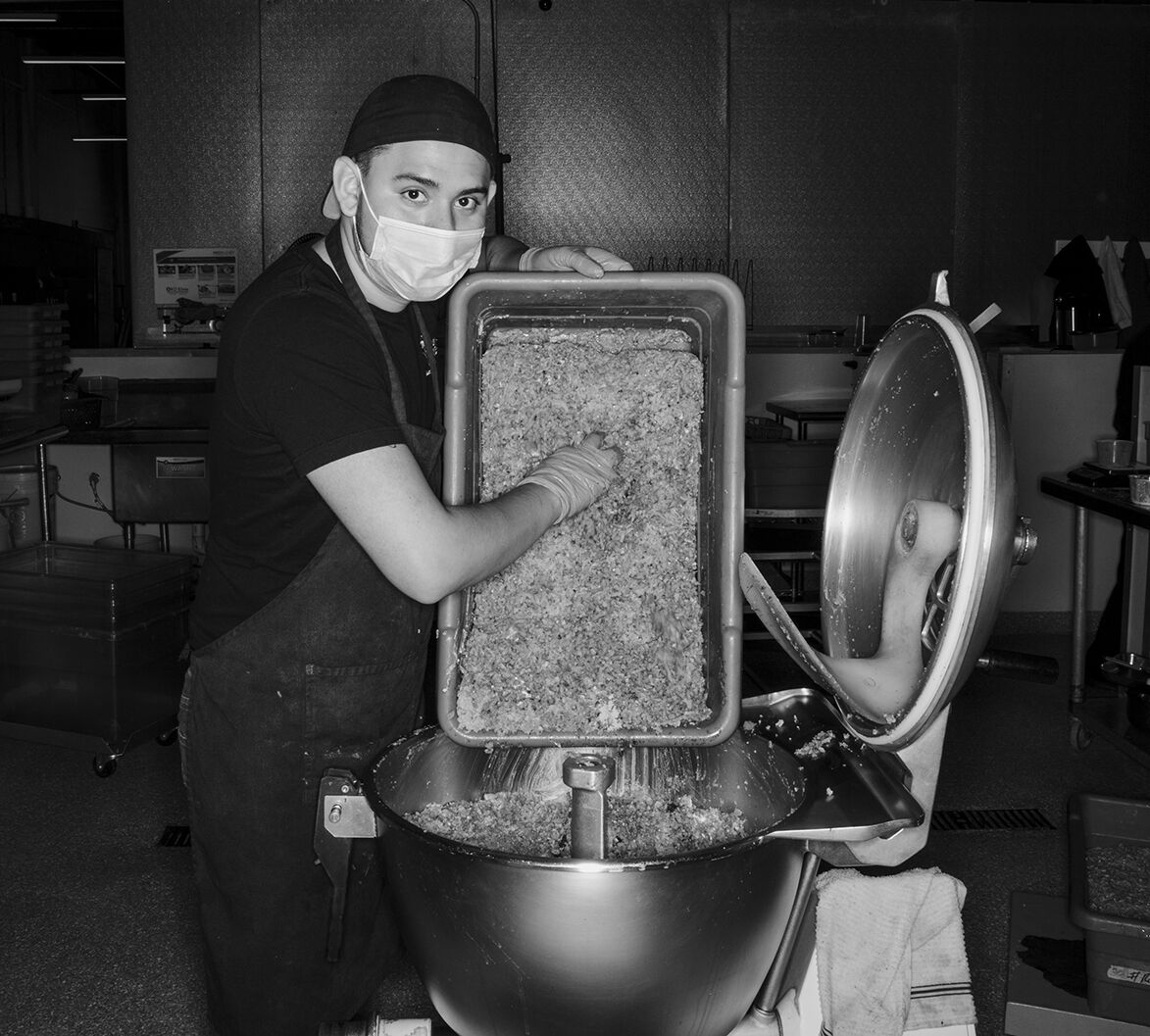 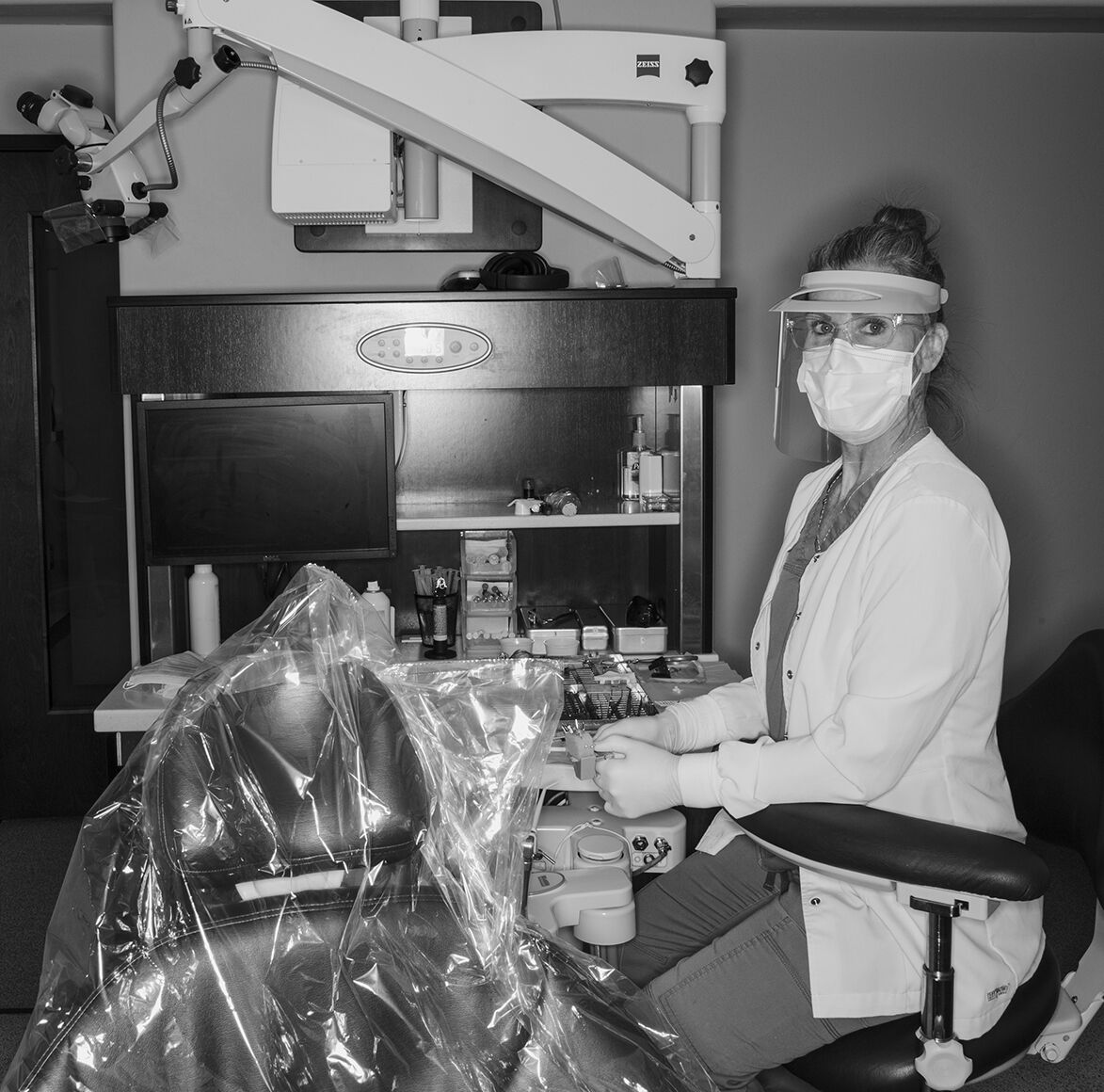 The signs of the pandemic are all around us: racks of face masks and antiviral wipes in the grocery store aisles, bottles of hand sanitizer at the checkout. At Food King in Santa Fe, a cashier named Jasmin stands by a sign that reads “It’s cool to be safe. Wear a mask,” reminding us that we’re living in very different times than we were just nine months ago.

In a black-and-white photograph taken by local photographer Eric Cousineau, Jasmin gazes at the camera, peering over her glasses, and looking like she’d rather be anywhere else. But she’s an essential worker, one of many who risk their health daily to perform necessary duties, even if those duties are as commonplace as ringing up your hot dogs and Cheerios at the register.

Since the start of the novel coronavirus pandemic, the term “essential workers” has taken on a significance that underscores class differences. Whether they’re stockers at the supermarket, grade school teachers, dental assistants, or mail carriers for the United States Postal Service, many Americans don’t have the luxury of working from home. They’re often the lowest-paid employees of a business or organization, working jobs that often don’t offer health benefits or paid leave. And they’re the most at risk of contracting CoViD-19. Yet, they fulfill necessary roles in maintaining the nation’s infrastructure and social stability. Cousineau, himself an essential worker, sees them. He sees himself in them and honors them by taking their portraits.

“I think the first portrait I took was of my mailman,” says the full-time Trader Joe’s staffer, who photographs on his off time. “I went out to check the mail, and he was sitting in his truck across the street.”

Cousineau, a single parent of 11- and 13-year-old boys, captures workers in environmental portraits that, while not candid, capture them at their job sites, posing for the camera but on duty. For his ongoing Center-commissioned project, Essential Worker, he’s been photographing the labor force around Santa Fe, including convenience store cashiers, homeless shelter and food bank volunteers, a butcher, and an auto technician. Cousineau’s most recent photographs were taken at Christus St. Vincent Regional Medical Center. There, he captured portraits of frontline workers, as well as security personnel, cafeteria workers, housekeeping staff, and administrators.

Images from the series can be viewed on Center’s website at visitcenter.org, which includes a donation link to support the project.

Essential Worker began as a way for Center, Santa Fe’s nonprofit support organization for documentary and fine art photographers, to highlight local photography during the pandemic. Matthew Contos, Center’s curator of public engagement, conceived of the project after his wife witnessed shoppers standing in line outside Trader Joe’s who were annoyed by the wait despite state health mandates requiring the business to restrict the number of occupants on its premises.

“That’s what sparked the thought for me,” Contos says. I thought, maybe art can play a role in this. Maybe we can highlight the workers having to deal with this. I brought this back to [Executive Director] Laura Pressley, and she was like, ‘This is perfect for Eric. He actually works at Trader Joe’s.’ ”

Cousineau is an alumnus of Review Santa Fe, Center’s annual portfolio review sessions for international photographers. Like his current project, his past work is focused on portraits of everyday people. His senior thesis project from 2003, when he was a student at the College of Santa Fe, was on Santa Fe’s homeless. Also shot in black and white, the images capture members of the homeless population against stark, white backdrops, allowing a one-to-one engagement between viewer and subject. They’re not unlike what you see in the work of famed photographer Richard Avedon, whose photographs represent a cross section of humanity, from royalty and celebrities to patients at a state mental hospital.

“I was using a white background before I ever heard of Avedon, but I do like his work,” Cousineau says. “My favorite photographer ever is probably Lee Friedlander. I don’t think my work is close to his, but I like his style.”

Cousineau set up an 8x10 camera outside of St. John Soup Kitchen twice a week to make the homeless portraits. In later series, like the Untitled Portrait Project, which he showed at Review Santa Fe in 2019, he’s continued his engagement with the human subject, shooting environmental portraits of people inside their homes.

Originally, Center hoped to get Trader Joe’s to agree to let the photographs from the Essential Worker series be projected onsite. The local management was all for it, but not without first acquiring permission from corporate headquarters. Contos and Cousineau pitched the idea to the store captain who tried, unsuccessfully, to obtain authorization. “There’s over 500 Trader Joe’s stores, so I’m sure they’re dealing with a lot,” Cousineau says. “It didn’t bother me. We made a little bit of headway, but when the protests and rioting started happening, Trader Joe’s in other cities were being looted, and they were dealing with that. So it kind of dropped off.”

Cousineau works at the store Monday through Friday. After his shift, he picks up his children from their mother’s house and spends each morning overseeing their remote learning. “If I need to take time off to go work on the project, they’ll give it to me, without question, especially with the hospital,” he says of his employer. “If the hospital says, ‘We have people lined up on this day at this time, and we need you to come in,’ I just call in to work and they’ll take me off the log for the day.”

It took Cousineau five months to secure permission to shoot at St. Vincent. The images are austere. They’re not famous, like in some Avedon portraits. They’re just people. But they’re no less deserving of our attention. They have a hand in making sure you have food on your table, and some of them could be the heroes who one day save your life. Tania, a certified nursing assistant, stands by a patient bed, gloved and masked, a mobile IV pole behind her. She works at the hospital’s Frost-19 Containment Unit, which houses and treats CoViD-19 patients in a separate area from the general population. Rebekah, a patient family action team coordinator, sits at a desk entering data into a laptop. And Jessica, a registered nurse in the intensive care unit, stands by a console that monitors patient health.

“What’s so great about the work is, not only is Eric representative of an essential worker, we can also put the work in those spaces,” says Contos, who hopes to show the work in at least one of the locations where the photos were taken, maybe the hospital. “I think it would be more powerful than, say, a gallery somewhere where only six people can enter at a time. We’re a small organization, and we don’t have a space. So everything is a negotiation, looking for partnerships.”

In the meantime, support for the ongoing project is growing. It was featured as one of the eight most powerful photo stories of the week on BuzzFeed on Aug. 29. It included a link to the series on Center’s website, and local gallery Form & Concept (formandconcept.center) includes the hospital portraits on its artist page for Cousineau as well.

“I thought Center would release it on their site, and my friends and family would be like, ‘Great job, congratulations,’ and life would move on,” Cousineau says. “But ever since Center released it, I’ve been answering questions for the press. It’s becoming bigger than I thought it would be, to be honest.”