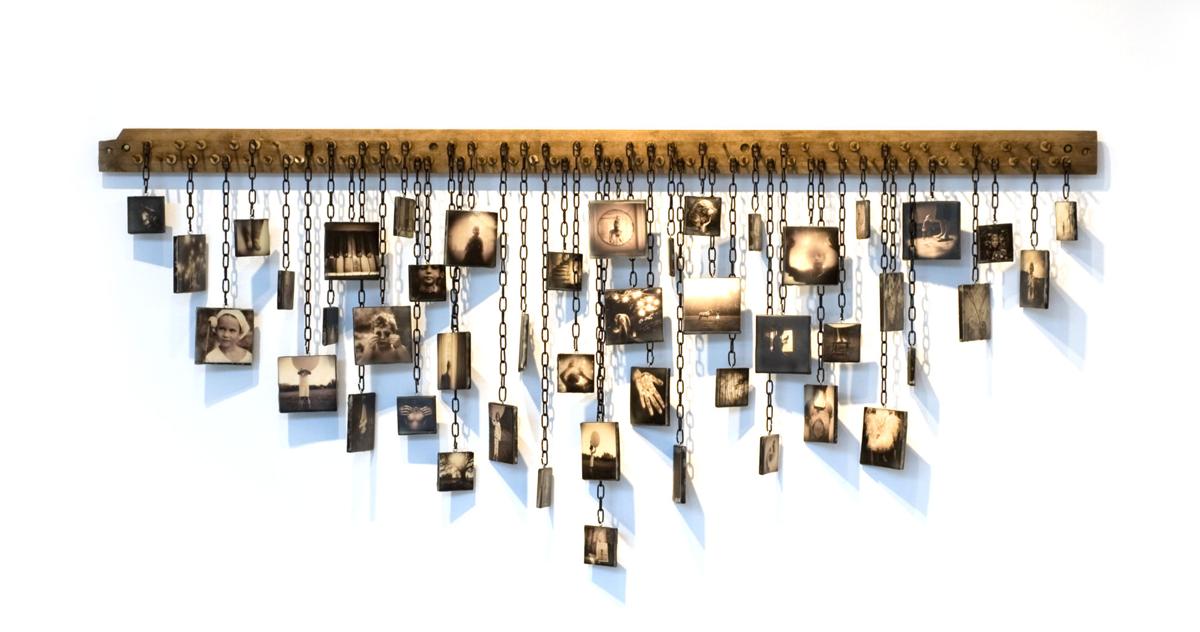 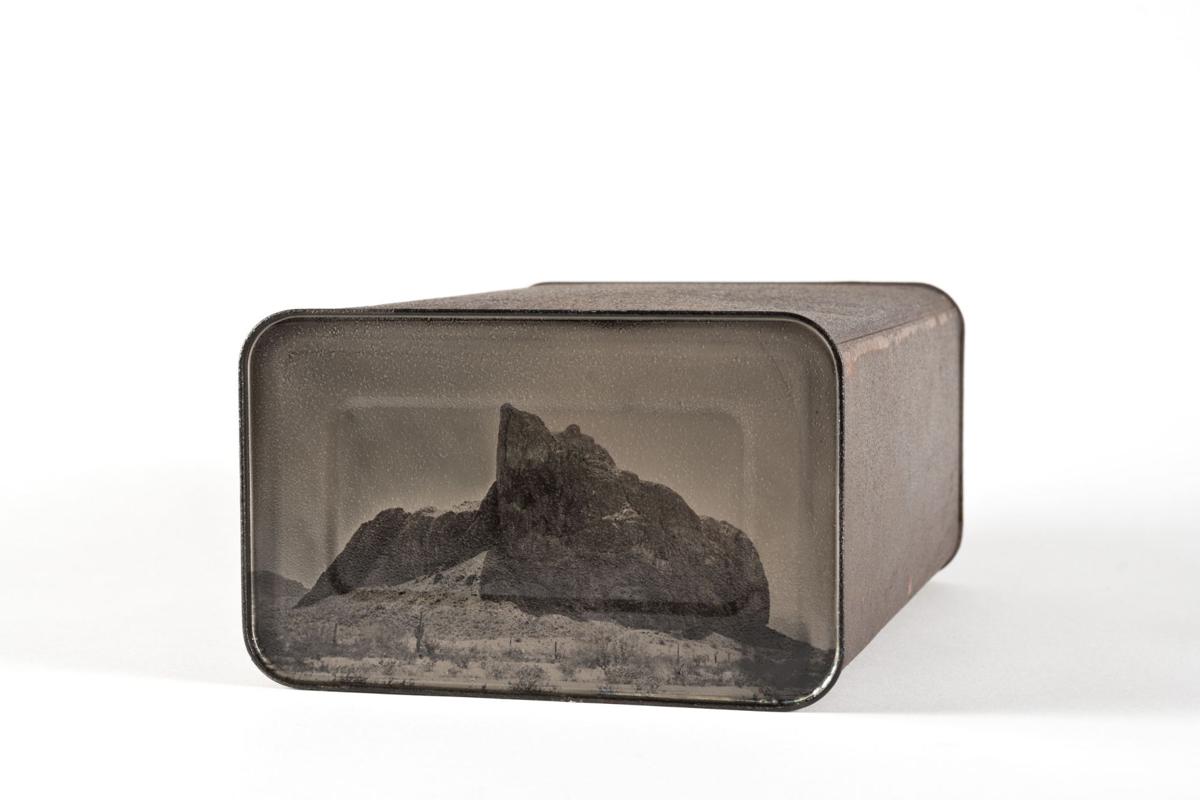 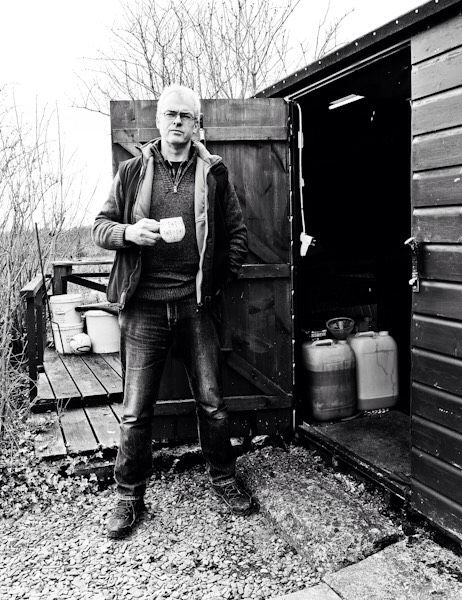 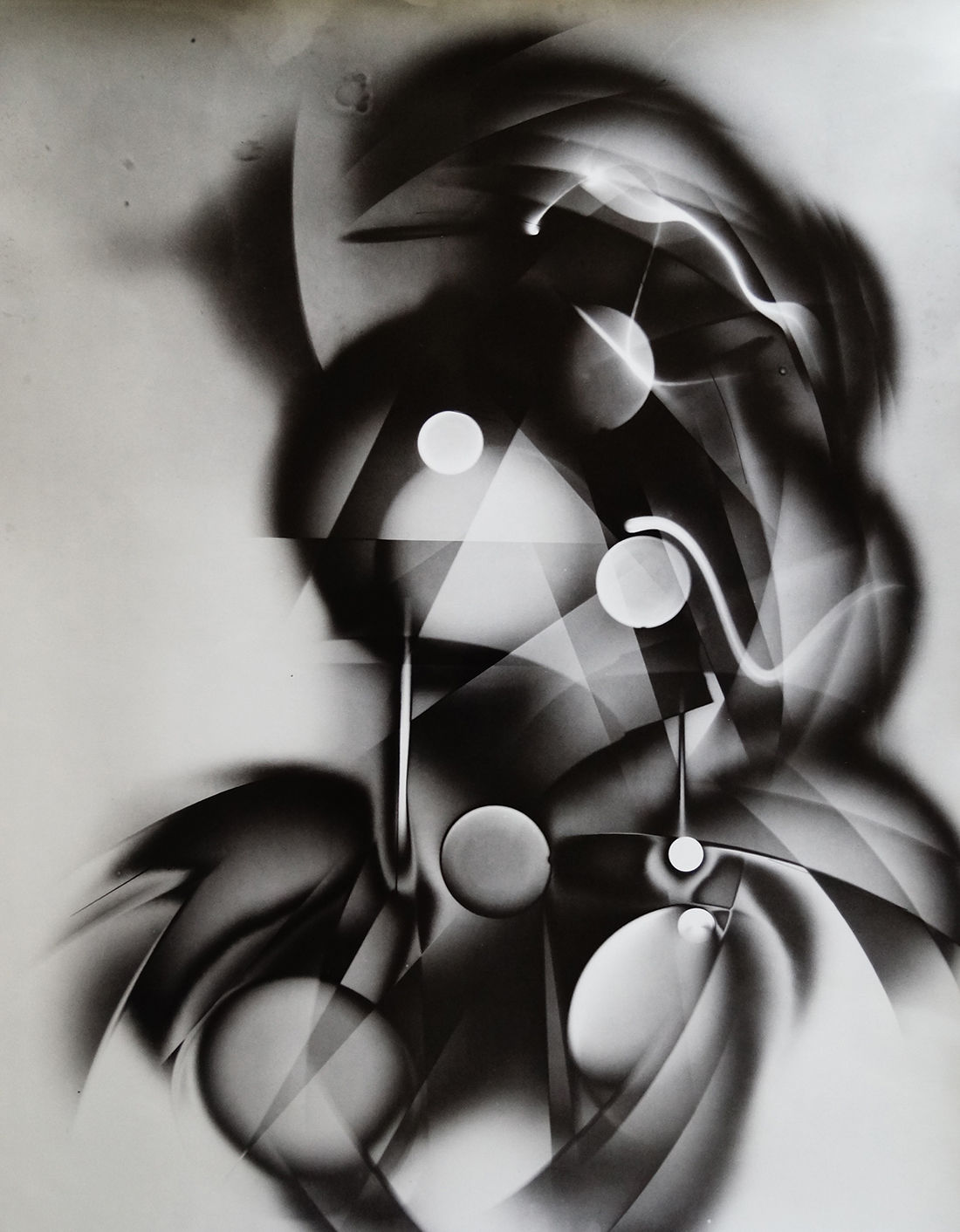 At a glance, it is apparent that Mrs. S is from a place few of us even dream about. Her appearance is arresting, complex, and vigorous: a collage of smooth-textured shapes that include discs, triangles, straight and squiggly lines, with indefinable patches that look sometimes geometrical and machine-like, and sometimes organic. This black-and-white image in the new show at Photo-Eye Gallery is a portrait by a man who has developed a most peculiar ability to represent his psychic responses to objects, and a language of forms to express them.

Light + Metal: Unique Photographs and Objects features this and other work by the British photographer Michael Jackson, along with pieces by a dozen other artists whose experimental work relates only tangentially to traditional photography. One example is David Emitt Adams, who uses the wet-plate collodion process to affix images to tin cans that he finds in the Arizona desert near his home. Another is Vanessa Marsh, who creates pastel “lumen print” landscapes using cut paper, masking, and multiple exposures for her Sun Beneath the Sky series.

Neither of those artists employs a camera. Nor does Jackson. He does use traditional gelatin silver (also known as silver gelatin) printing papers and traditional darkroom chemicals — developer, stop bath, and fixer — and a microwave oven to gently warm them up. That’s about the extent of his paraphernalia, but he doesn’t feel like he’s anti-technology. “I wouldn’t want silver gelatin paper in the darkroom to be seen as an ‘old’ process,” he said. “I think that its best days are ahead of it. I just hope people like Ilford keep on making it.”

Many old-school photographers lament the disappearance of favorite printing papers such 7as Kodak Kodabromide and Agfa Brovira in the wake of the digital revolution. Jackson lucked out by purchasing a large supply of Hungarian Forte paper from another British photographer, Paul Kenny, just before the product was discontinued. “It is beautiful and quite a luxury,” Jackson said. A couple of his works at Photo-Eye are made with that paper; for the others, he used paper from the English company Ilford.

Jackson is known for his yearslong photographic study of a beach in Pembrokeshire. His luminograms like Mrs. S relate back to lessons learned there on the shore. “Poppit Sands is a remote beach, and I would visit there whenever the tide was low and the light was OK, so I have been there many hundreds of times,” he wrote in an email from his home in Dorset. “When you study something for that length of time, you find yourself repeating results and then you either pack up and move on to something else, or you hold on and look harder for events that excite you. I chose the latter and held on there for eight years, until I found myself getting excited about the simplistic things, marks made in the sand by sticks that dogs had dragged about.

“By analysing my results over the years and eliminating what I felt wasn’t necessary for me to get excited, I had managed to slowly reduce elements on the beach to a very core of what I wanted. And when I reached that point, I remember I drove home and took some cut-up shapes of paper and moved them around on my kitchen table, and I was amazed that my excited response to that control of shapes was an exact match to what I was feeling and what I was searching for on the beach. And at that point I realised that I didn’t need the beach anymore, as I could get all that I wanted from working with the relationships of shapes and tones and lines.”

A trove of free photo-printing paper facilitated his trajectory into luminography. A man who lived near Poppit Sands gave him stacks of resin-coated (RC) photographic paper, an easier-to-use silver-based medium than fiber-based papers like the Forte and Ilford. “Two months later, I was printing for an exhibition, and while in the depths of darkroom technicalities, I started to experiment with these simple small cut-up bits of RC paper,” Jackson said. “I began to notice that if I controlled light in a certain way, then the silver gelatin paper would give a distinct and, as you say, organic look that I had not seen before. I stopped working on anything else and started experimenting properly. It took me approximately one year to work out a series of steps and chemical temperatures that gave me repeatable results.”

Four years into the practice of creating luminograms, he considers silver gelatin paper “as much a medium in its own right as oil paint or drawing or sculpture.” Besides the material’s magical photosensitivity, he loves the fact that it physically changes at a chemical level, a substantial difference from pencil or paint added to paper or canvas. “And I often think of the luminograms as a kind of sculpture, just sitting there on the paper — almost as if you can reach in and pick it out of the frame.”

He still exercises the same perception, intuition, and mechanical skills as when he first delved into this realm. “I discovered that I could see a subject, and I could recognise how that subject made me respond to it. I can then go into the darkroom and make marks on the paper with light that mirror the initial response.” He describes the process as “an objective response to a subjective response. So I am trying to show my response in a physical form — on paper — carved out of light. How crazy is that!”

The artist fine-tuned his sensibilities with a decision to represent his response to a color, specifically the color of the fields of summer flowers in southern England. “Obviously colour has no physical shape, so when I make a luminogram about the colour yellow, I am showing my response to that colour yellow. When I am making the luminogram, I respond to it in the same way that I would when looking at yellow.”

Yellow is in the Photo-Eye show, as are examples of his portraiture. For Mrs. S and her “siblings,” he addressed a new set of technical difficulties. He studied pencil portrait drawings by John Singer Sargent “to build up ideas of a head, neck, shoulders, and how they all fit together as if they had weight.” At this point, Jackson feels, “The human head is as limitless as the beach.”

In a video statement featured on the Ilford Photo website, Jackson says his process “allows your ideas to be very, very obvious on the paper.” There is no question that he has evolved a set of ideas that are quite unusual and distinctive. “I think that is because I worked on the process from the ground up,” he said. “I didn’t have any help at any point — I just added steps that I liked and took out steps that failed. And that way, eventually, you get a unique number of steps that give a unique body of work.

“I think that if you are honest with yourself and listen to your own ideas and trust in that gut feeling that sets your belly on fire, then you can’t possibly produce work that looks like someone else’s.” ◀