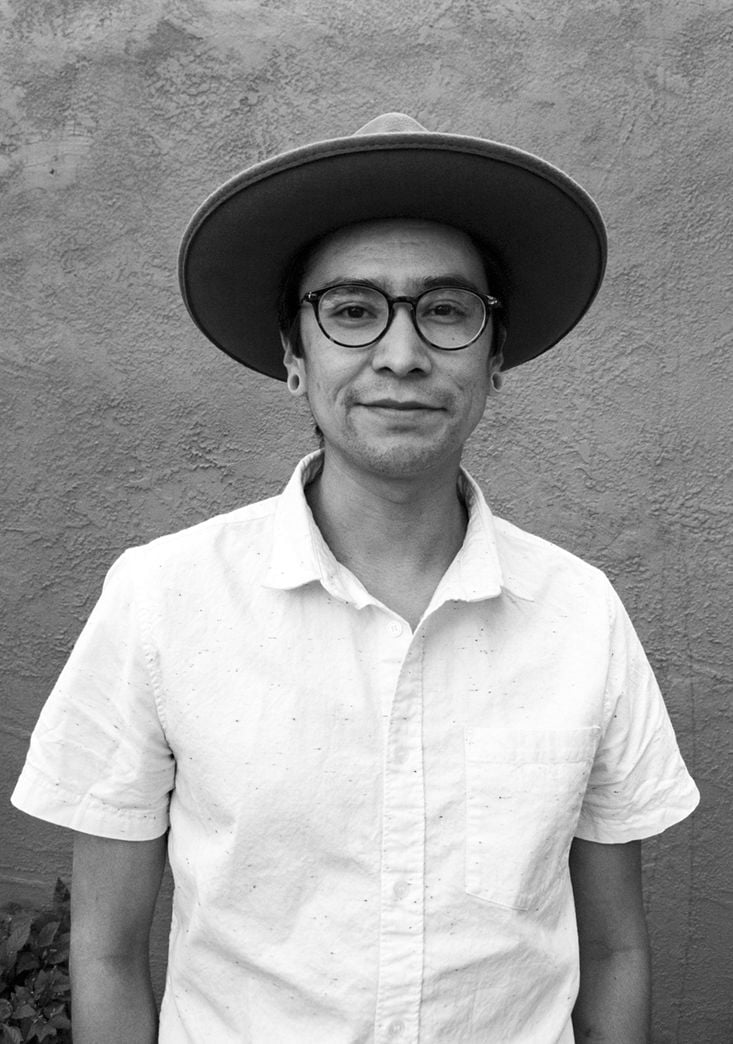 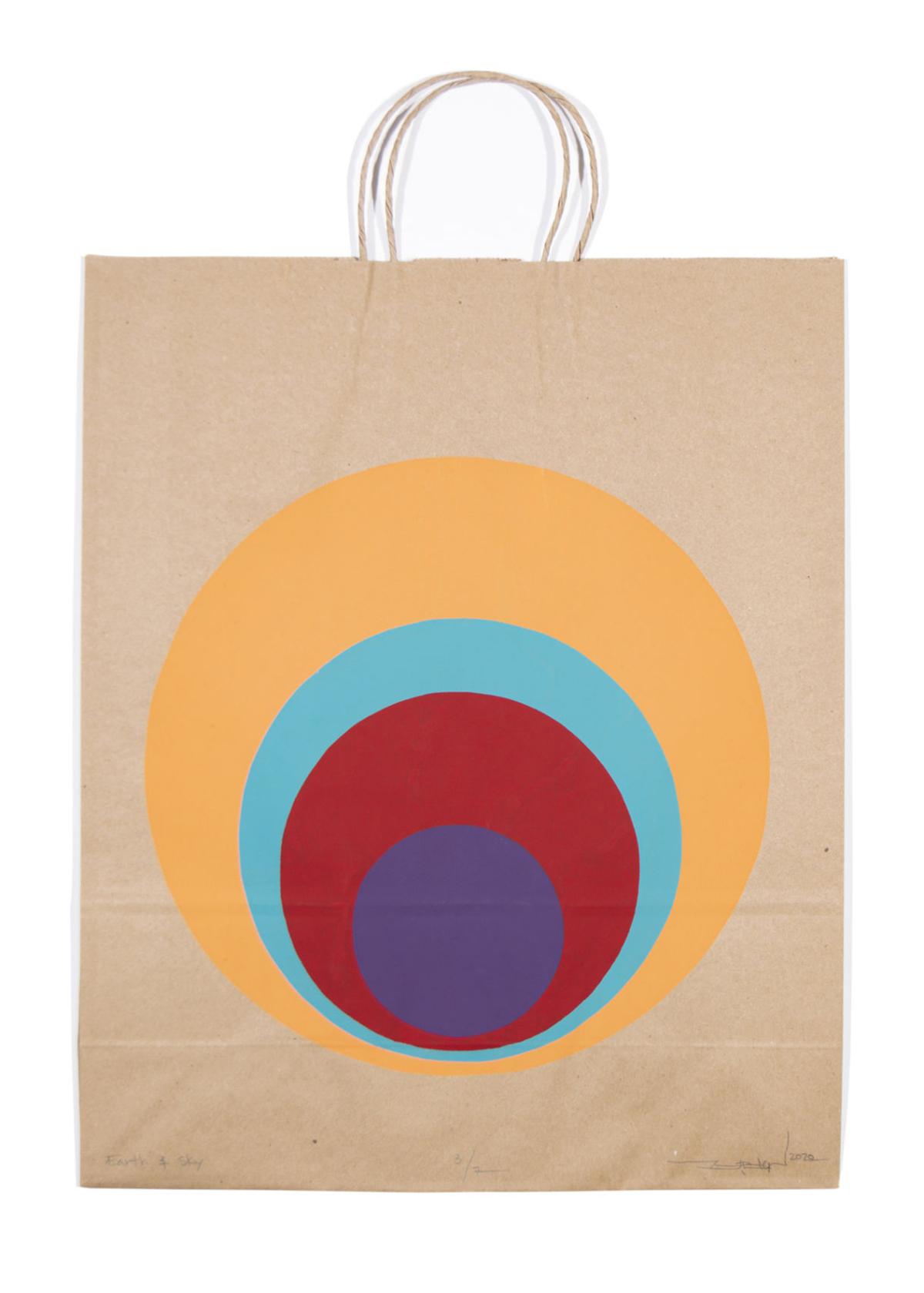 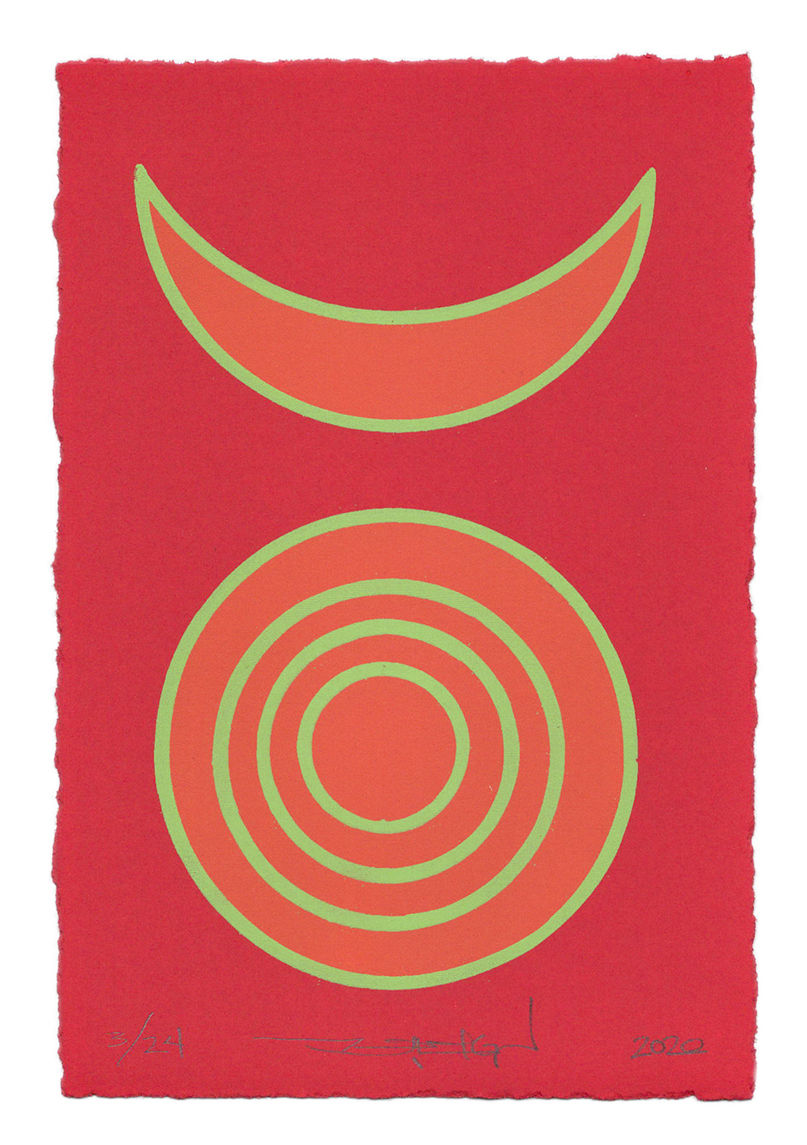 A circle should be easy to describe, but this one isn’t. Its edge is a thick rim of sky blue, except for along the right side, where it tapers into midnight. Within this ring is a color field sunrise, crimson at the top and orange at the bottom — although “orange” doesn’t do justice to how the hue glows on the (somewhat incongruous) background surface of a brown paper shopping bag.

This is Land of the Sky Beings, a serigraph print by Terran Last Gun that appears in Paper Bags, a new solo show opening at Hecho a Mano on Saturday, June 27.

The image has a sleek, graphic sensibility that would be at home on a mod shift dress or a high-end designer handbag. It’s a little bit ’60s, a little bit ’80s, and very au courant. And it’s firmly rooted in the culture of the Southern Piikani tribe from Montana.

“I’ve explained to various people over time my inspiration and where it comes from, and it can be hard for people to write about. It’s complex and layered,” says Last Gun, 31. “I’m originally from Browning, Montana, on the Piikani Reservation, also known as the Blackfeet. A lot of my work reflects my nation — our history, culture, and aesthetics. Really, it goes back to our painted lodges. We had a lot of real simple geometric imagery to symbolize the world around us.”

Brightly painted lodges have existed among the Piikani for thousands of years, and their imagery is handed down through families, Last Gun says. Lodge designs are broken into three zones: Earth at the bottom; animal spirit helpers in the middle; and the sky world, or world above, at the top. The 10 15-inch by 23-inch prints in Paper Bags feature the bold squares, triangles, and circles of the Earth and sky zones, sometimes in a primary color palette of red, yellow, and black, and sometimes in secondary or complementary colors.

Last Gun’s art looks ultra-modern, the kind of pieces that would splash any room with clean-lined cheer. But whether or not people pick up on the stories he’s telling, his focus is on the perpetuation of ancient imagery in a contemporary way. Many of his color combinations are inspired by regalia worn by powwow dancers. (As a teenager, Last Gun danced the Prairie Chicken dance.)

That sensibility is exemplified by Sky Beings, in which concentric orange circles and a horizontal quarter moon lined in lime green float on field of red coral. “The rings represent the sun, the moon, the morning star, and the Earth. I was drawn to a quote that our current chief made about how our sky stories were full of lessons and ways to live. That’s our oral history. Some people try to discredit it as not factual because it’s not a Western form of documenting.”

People are often surprised to find out that Last Gun’s work is by a Native artist, which is a term he doesn’t particularly care for, anyway. He’s not thrilled with “American Indian,” either. “Even ‘Indigenous’ can be hard to use,” he says. “I just have a hard time with some of those colonial terms to herd us all together. In America, we’re nations within a nation. I know I come from prisoners in our own land. [The Piikani] are Plains people, warrior people. I feel we were never really conquered. We were overwhelmed. Disease took us over and took a lot of us. And my work has all of that going into it.”

Last Gun moved to Santa Fe in 2011 to earn a bachelor of fine arts degree in museum studies at the Institute of American Indian Arts, where he fell into art classes and gravitated toward printmaking. He was attracted to the aesthetics of ink on paper and the graphic correlation he saw between the medium of serigraphy and the painted lodges of the Piikani. He has spent time looking at photographs made by the anthropologist Walter McClintock in the late 1800s and early 1900s. “I’m a collector of anyone who documented us over time,” he says. “I’ve used those [photos] a lot and done my own research. And I had my experiences back home, growing up, learning about the tragic history of them being looted, stolen. They’re in museums across the world.”

Until he was laid off in March, Last Gun worked part-time in shipping and installation at Manitou Galleries. Since then, he’s focused entirely on his art, increasing his social media presence to successfully boost sales of his prints. (He’s @terranlastgun on Instagram.) He’s received several artist relief grants. Despite the loss of a regular paycheck, the crisis of the shutdown showed him that he has the potential to make it as a full-time artist.

“I think what his art is doing is really compelling, and people are responding,” says Frank Rose, owner of Hecho a Mano and self-proclaimed “creative conductor.” “The color is a doorway that draws people in. What gives it its staying power is the thought behind it. It’s taking something that’s pleasing to look at but has depth. The images talk about something cosmic, but they’re printed on paper bags. There’s something humorous about it. And, as Terran says, the bright colors just look good on brown paper.”

Last Gun completed the prints in Paper Bags in early spring at IAIA, where he continues to audit classes in order to have access to studio facilities. But the spring semester was cut short by the coronavirus pandemic. This presents an interesting dilemma as he prepares for an Aug. 1 opening of an eponymous show in the Lloyd Kiva New Gallery at the Museum of Contemporary Native Arts’ museum store. With no access to a printing press, he can’t work in his chosen medium. He’s considering painting the same kinds of designs on canvas, and he’s also toying with the idea of drawing with colored pencils on late 19th century ledger paper. “My father is a ledger artist,” he says. “I was gifted this paper last year from another member of our nation. I haven’t touched it. I’ve been letting it sit and stew. It’s old, and I don’t want to mess it up.”

Lately, Last Gun has been thinking about how current events might work their way into his art. He doesn’t yet know what that would look like but he feels the need to do something. He attended a candlelight vigil at the Roundhouse in honor of George Floyd, the black man killed in May by a white police officer in Minneapolis. At the vigil, speakers asked the crowd to consider what justice means to them.

“It’s hard to wrap my mind around,” Last Gun says. “How would I even answer? As Indigenous people, we’ve gotten so used to injustices happening on our reservations that it just feels normal. We don’t have the kind of police brutality on our reservation that is happening out there, but there are deaths that go unsolved and no justice for those families. [The protests] make you think about your own community and where you come from. I stand with people who are trying to make a difference.” ◀