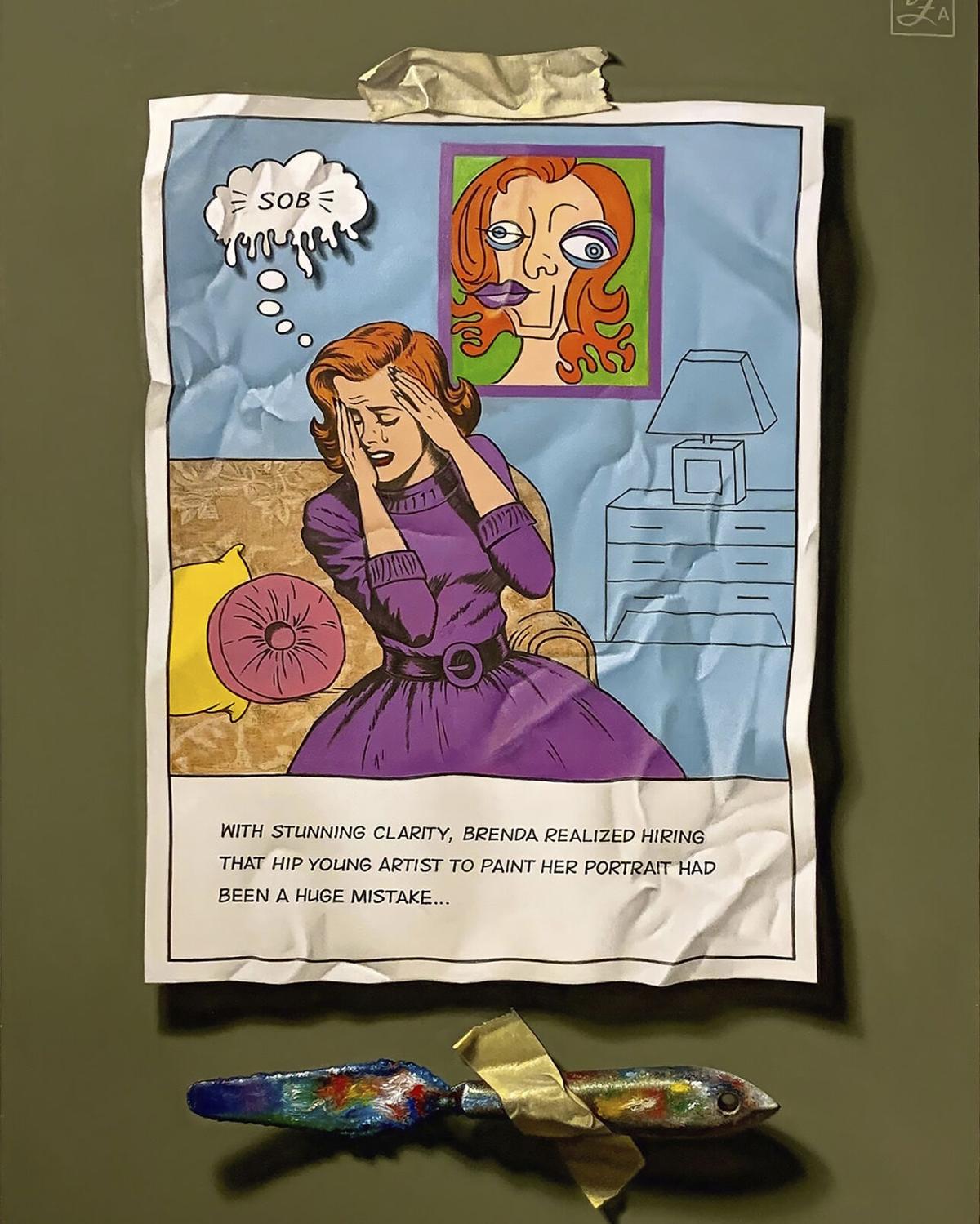 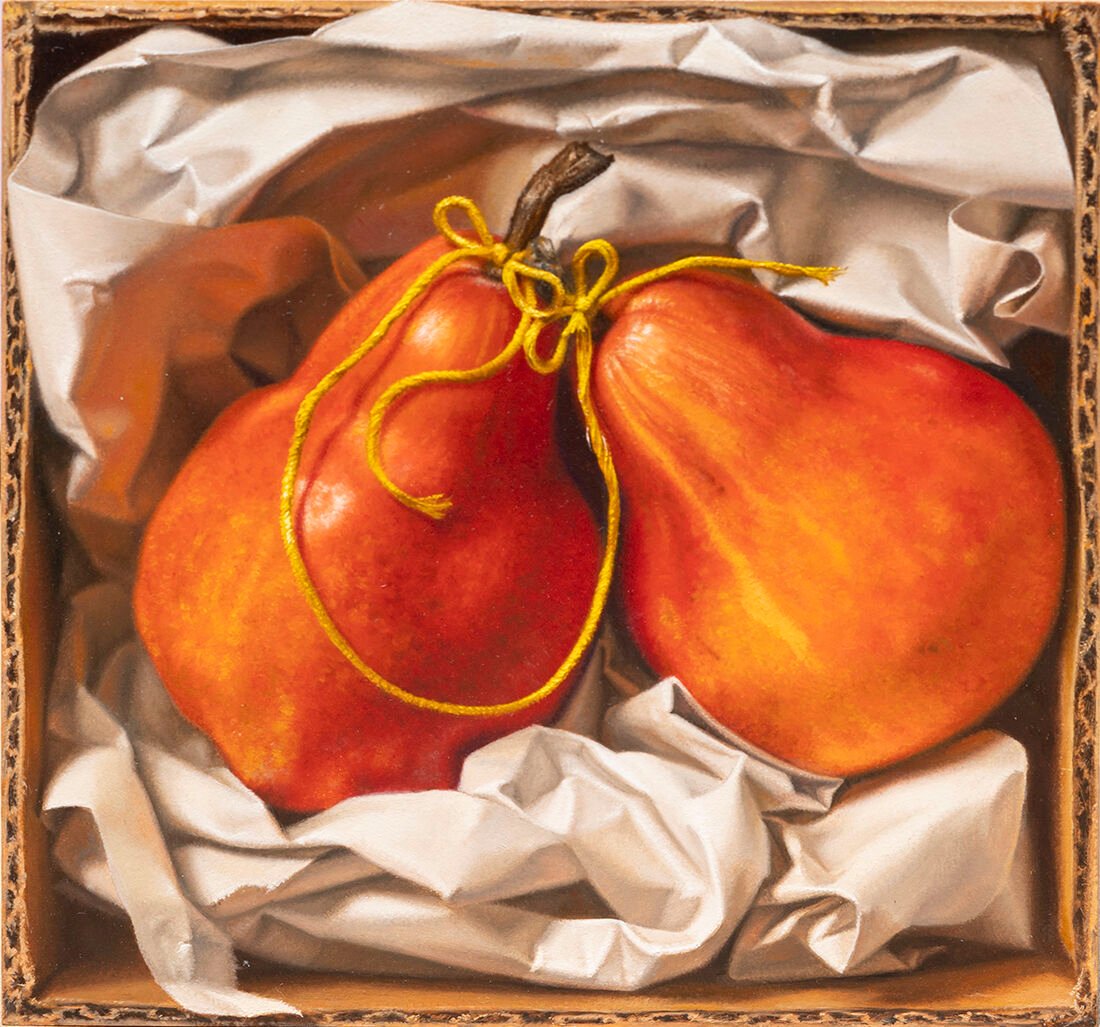 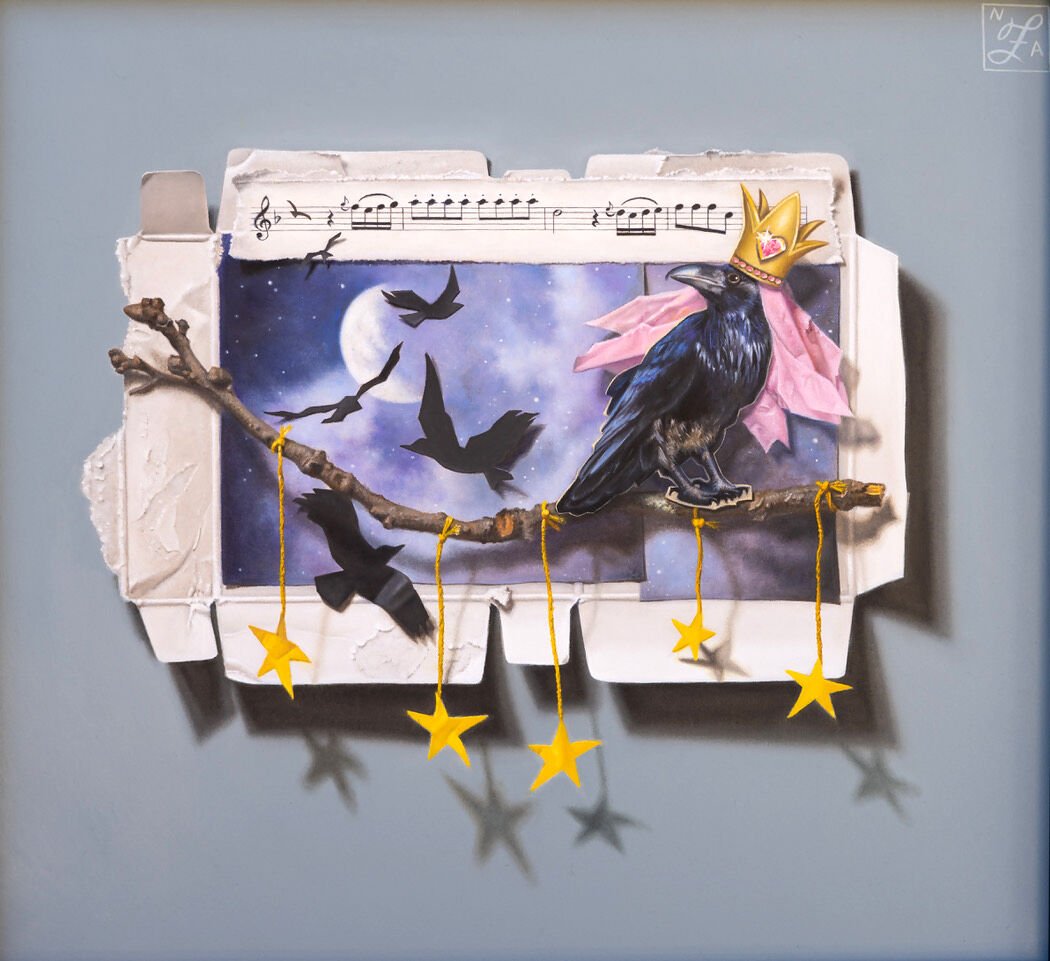 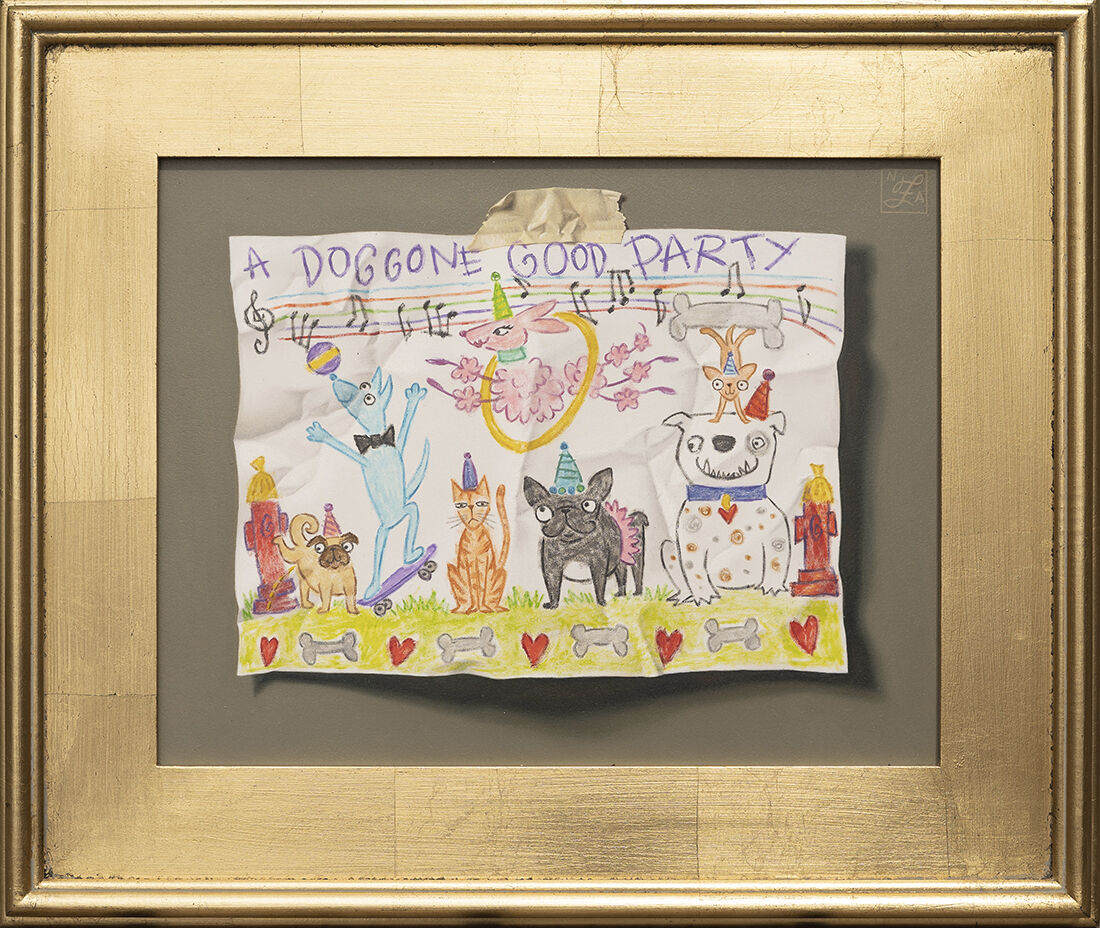 A redheaded woman in a purple dress sits on a floral davenport, her head in her hands. Above her in the one-panel comic is a thought bubble that says “SOB,” next to a monstrous abstract painting of her. A caption under the composition reads “With stunning clarity, Brenda realized hiring that hip young artist to paint her portrait had been a huge mistake …”

The Lichtenstein-style piece of pop art has been crumpled into a ball, smoothed flat, and hastily affixed to a greenish-gray wall with a messy strip of masking tape. Beneath that, there is a metal palette knife slathered in different paint colors that is also taped to the wall.

But lean in to touch the objects in Natalie Featherston’s When Disaster Strikes — The Art World Edition: Brenda’s Huge Mistake (2021) and you’ll find that what you thought was a piece of paper and a palette knife is actually a 19-inch-by-13.5-inch two-dimensional oil painting. This is what a trompe l’oeil artist is counting on: The split second when you go from being tricked to being in on the joke.

“There’s this shift in perspective that I don’t think you have with anything else. That’s what I love the most, that moment where they realize it’s not real,” says Featherston, whose recent paintings appear in a solo exhibition at Meyer Gallery, Faux Sho: Trompe L’oeil Double Visions, opening with a public reception on Friday, Oct. 22.

“Trompe l’oeil” is French for “to deceive the eye.” Though the historical tradition of painters playing with reality dates to ancient Greece, the term was first used in 1800, by the still-life painter Louis-Léopold Boilly. Trompe l’oeil paintings have cast shadows with very narrow depth perception. They look as if you could pull the objects depicted off the wall.

“The important thing about trompe l’oeil is having a strong, one-directional light source and a very pronounced cast shadow, because that’s what gives it that three-dimensional quality. I will spend a lot of time arranging things just to get the right kind of shape and value. The shadow is the money shot of trompe l’oeil,” Featherston says.

There’s usually some degree of humor to trompe l’oeil because the sudden shift in perspective is likely to bring about a laugh of recognition. But Featherston is overtly humorous. It’s a crucial part of her aesthetic and her personality.

Featherston, 52, has been working in trompe l’oeil since the 1990s, after she gave up a promising career as a cellist to pursue an uncertain future as a visual artist.

“I was at Manhattan School of Music on a full scholarship. I woke up one morning and felt like I’d never made a decision to have this music career, and I was about to spend the rest of my life in an orchestra playing Mahler’s symphonies,” she says. “I dropped out of school and got a job waiting tables.”

Looking for a new creative outlet, Featherston started taking night classes at the School of Visual Arts. Soon, she was deep in study at the Art Students League of New York and New York Academy of Art. She also did an extended internship with the reclusive painter Michael Aviano, who annually accepted a handful of students to mentor in his tiny one-bedroom apartment on Manhattan’s Upper West Side. Aviano was born in 1927 and was in his 70s when he began tutoring Featherston.

“He was so hardcore that the bedroom was his art studio. He didn’t even have a bed. He had this baroque living room, and he slept on a pallet that he stored, rolled-up, in a closet.” Of the curriculum, she says, “You had to do each exercise until he was satisfied that you understood the concept. He’d had one student who’d been there 15 years. After six years, he said he’d taught me everything he knew: all 72 studies and exercises in monochrome painting, cast painting, the color program, composition, flower painting, drawing.”

Featherston lives in Providence, Rhode Island, which she says has an incredible art community. The scenic capital city is home to Rhode Island School of Design, so there are five art supply stores within walking distance of her house. And she’s a member of the Providence Art Club, founded in 1880, which offers classes, gallery exhibitions, and social events for artists. She has a small studio in her home, where she creates her still life compositions. She hangs pictures on a greenish-gray wall and sets up still lifes and dioramas on a long table.

Featherston has several ongoing series. For the 20 works in Faux Sho, she painted pairs from various categories, including children’s drawings, comic strips, fruits and vegetables, and portraits on toast. Many of her pieces are small, such as the 6-inch-by-6-inch image of a green apple (Mended, 2021), which appears to have been stitched with red string. The stitched-up apple looks like it’s nestled in crumpled paper and packed into a small cardboard box.

Larger works include Best Face Forward: Rothko (2021), a 10-inch-by-10-inch piece featuring a quote from the mid-century color-field painter: “It is a widely accepted notion among painters that it doesn’t matter what one paints as long as it is well painted. This is the essence of academicism. There is no such thing as a good painting about nothing.” It appears to have been written in cursive, in pencil, on a tattered scrap of paper, and taped to the back of an artist’s canvas.

For her children’s drawings, Featherston creates scenes between a little girl and dinosaurs, as in Be Magical (2021), a painting that looks like a crayon drawing by a kindergartner. It tells the kind of story Featherston says art needs more of. “You have the velociraptors, the tea party. The little girl looks happy but maybe a little bit anxious. The dinosaurs aren’t magical beings like unicorns, but they are trying. They’re [wearing] unicorn horns. I think it’s aspirational.”

She always paints from life, never from photographs. She draws the dinosaurs, stitches the fruit, and shakes the cocktails that appear in her paintings. She also creates fantastical collages. King of the Jungle (2021) features a monkey wearing a three-pointed crown, perched on a tree branch in a tropical setting. She has to “fudge it a little” for toast portraits, since she can’t get such icons as cult filmmaker John Waters or the ghost of Johnny Cash to model for her. Nor does she have a toaster that prints famous faces onto bread.

“I make a toast scale — toast five or six pieces of bread at different settings, from dark to light. And then I transpose them with a photograph,” she says.

Mark Migliaccio bought a toast portrait of Star Wars villain Darth Vader, called The Dark Side, about 8 years ago at Meyer Gallery. His family now owns seven of Featherston’s paintings, including three commissions. One of the commissions is a family portrait of Migliaccio, his wife, and their child as Day of the Dead figures. Another is just a single strip of bacon.

“We wish we had more walls,” says the Albuquerque-based writer. “If I’m in a bad mood, I look at her paintings and get happy.…She’s a master. The little knots that she puts in the wood, and everything she does to make [her paintings] look realistic. She doesn’t leave out a single detail.”

Featherston’s paintings sell almost as quickly as she can paint them. Many of the pieces in Faux Sho are already spoken for, bought by collectors as soon as they appeared on the gallery’s website.

“Meyer Gallery is privileged to represent many gifted and talented artists, but there’s one group of gallery painters — the realists — who never cease to amaze our collectors,” says gallery owner John Manzari.

“This distinct lot of artists manage to take their realism one step further and create contemporary interpretations of the classic trompe l’oeil. Featherston has devoted her entire career to this illusionary style of painting. And boy, is she good at fooling us all!”