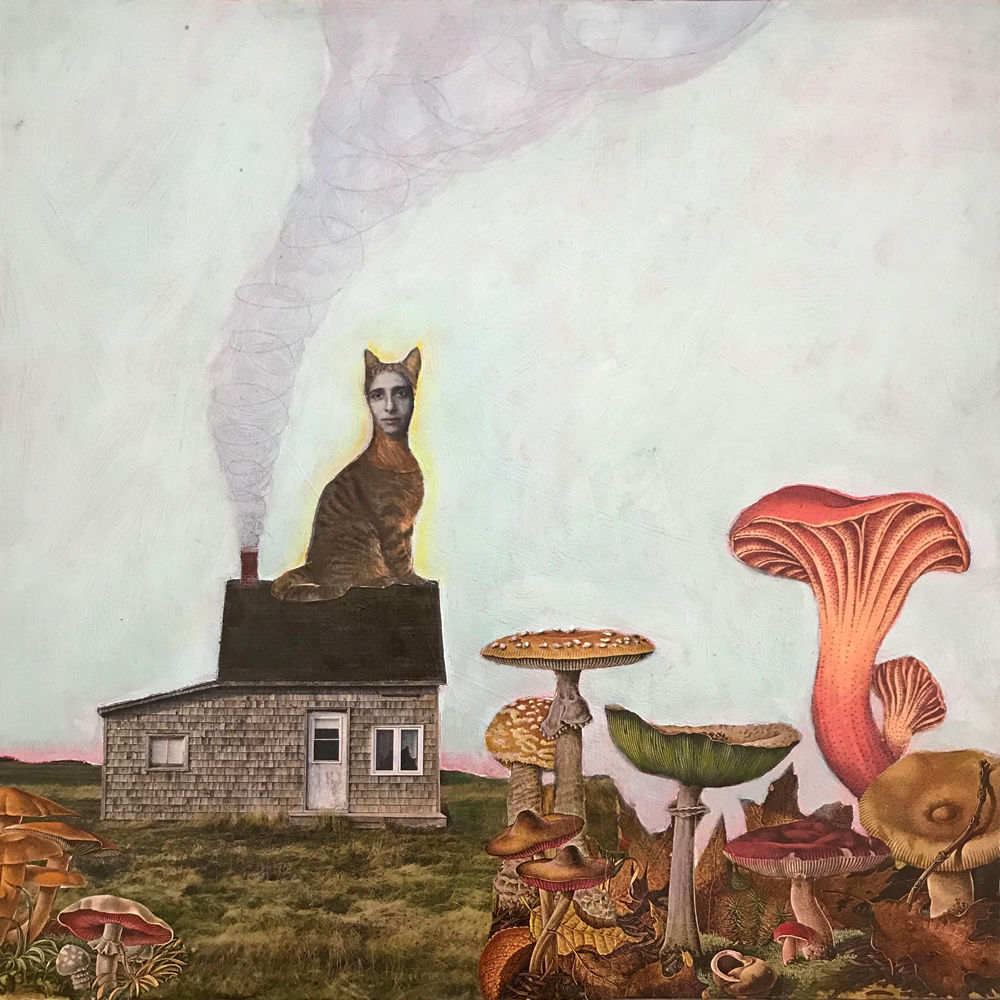 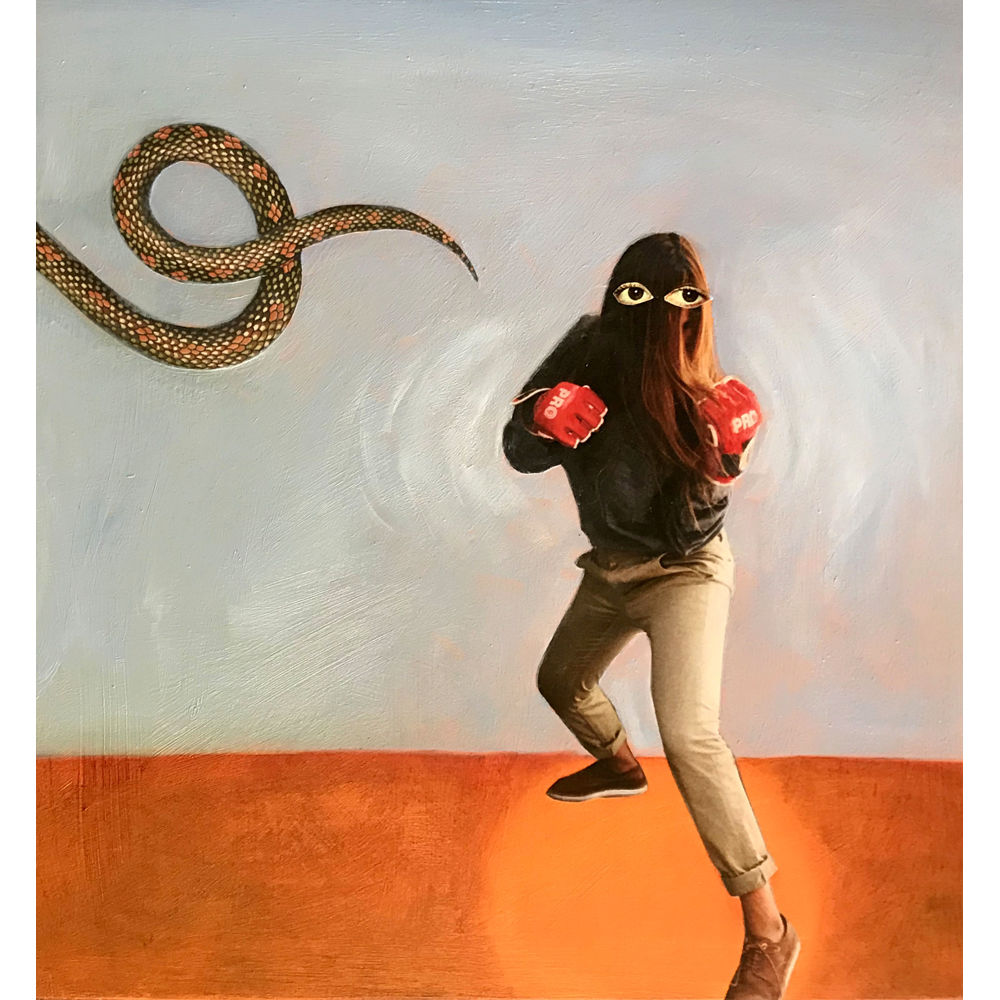 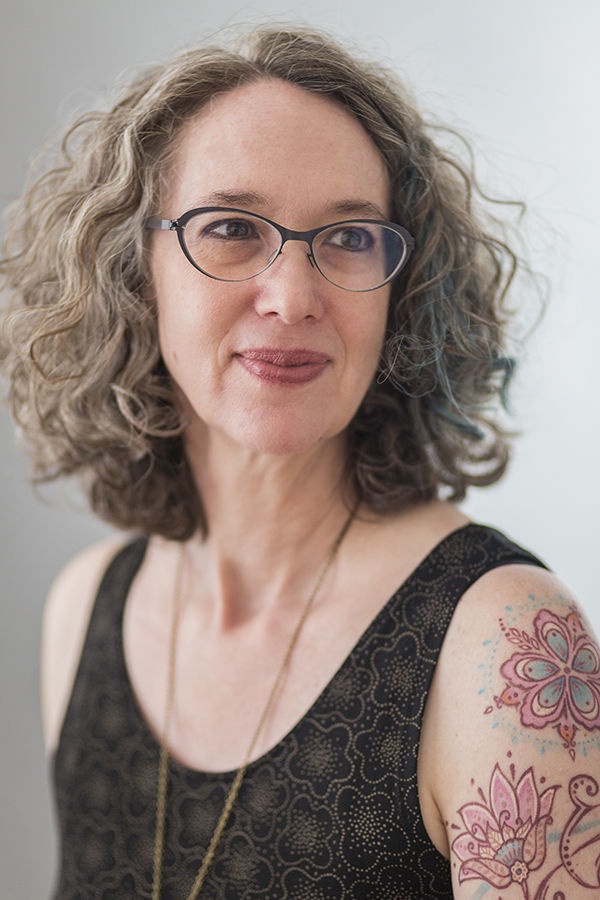 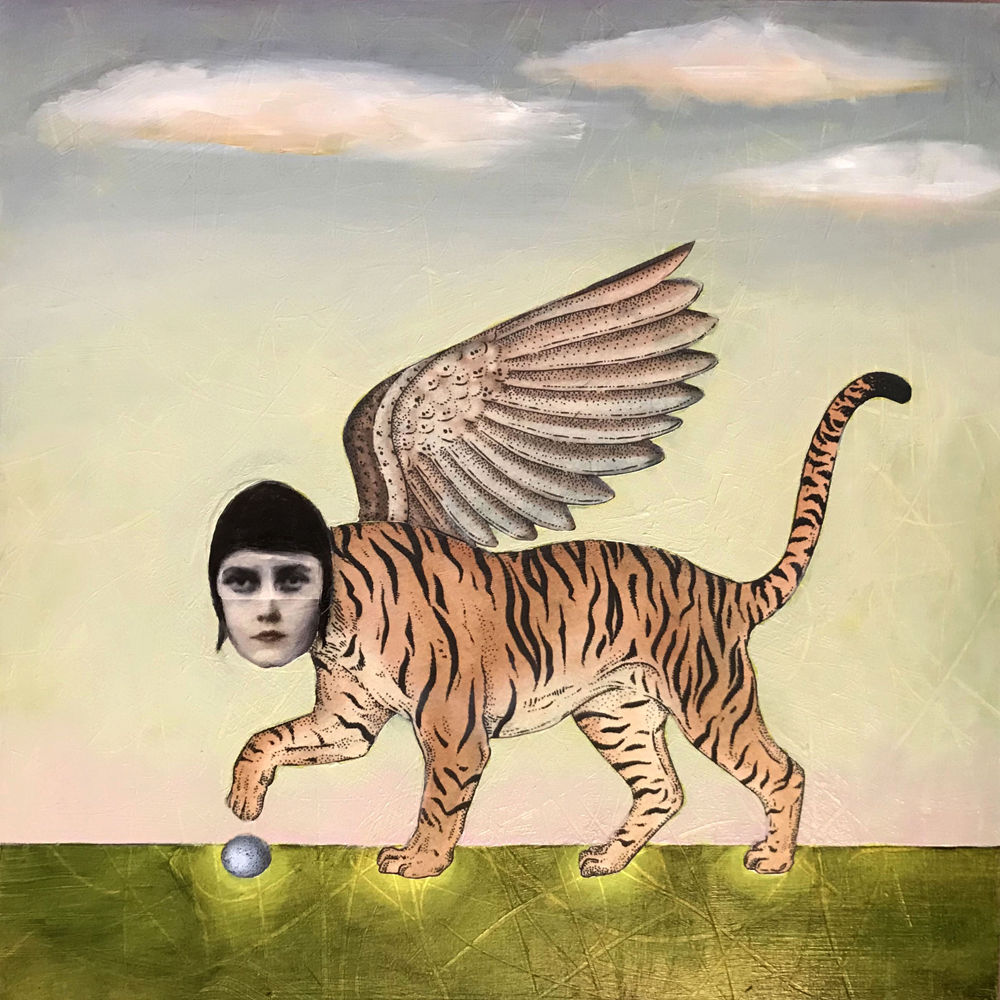 Gloved fists raised protectively and feet spread in a defensive stance, the boxer faces off against an unseen adversary. Long hair shrouds the figure’s face like a mask but doesn’t hide the outsized, mismatched but calm and soulful eyes. In this mixed media collage by Albuquerque artist Suzanne Sbarge, shimmering lines surround the androgynous boxer’s torso and give the impression that he or she is dancing — sidestepping, hopping, retreating, advancing — and throwing punches. The uncoiling tail of a serpent comes into frame from the upper left. But it doesn’t seem to threaten the boxer. In fact, they may be fighting on the same team.

What are we to make of this figure? Why is the face hidden? Why does the great serpent appear suspended in midair, and what is its relationship to the boxer?

Sbarge, who combines oil and acrylic painting with found imagery, invests all of her work with a surreal quality. It’s as impenetrable as the imagery of dreams. “I don’t want to define the narrative too clearly,” says the 54-year-old artist, whose solo exhibition Dovetail opens at Turner Carroll Gallery on Friday, Nov. 22. “I want to give a sense that there’s a narrative and that there are all these possible stories. But there’s no one story.”

Landscapes often form the backdrops against which these open-ended narratives unfold. But they’re not autobiographical. Their ambiguity is an open door, inviting the viewer into realms that are, at once, familiar and strange. Sbarge brings an element of the fantastical to her work that seems unexpected from someone with a long career in arts administration. An artist and entrepreneur, she is also the founder and executive director of 516 Arts, a thriving non-collecting contemporary art museum in downtown Albuquerque. Without sacrificing one, she’s managed to bring regional recognition to the other. Dovetailing, or fitting together, relates to that balance as surely as it relates to the odd convergences in her current body of work.

What’s in a name?

Dovetail follows a loose theme that’s reflected in its title, which suggests a conflation or joining of separate elements. That theme is something characteristic of her art in general — it could refer to the merging of human and animal imagery, past and present, or fantasy and reality, all of which are in play in her work. “As part of the process of thinking of a title for the show, I was brainstorming with my sister, who’s a word person,” Sbarge says. “We were trying to think of words that relate to birds or animals or have other kinds of references and metaphors that would apply to the process that I do. And that’s very much about opening up and listening to the unconscious and trying to not have it be an ego-driven, left brain, rational process.”

The term “dovetail” seemed like a good fit. Researching the word, Sbarge learned it had a history going at least as far back as ancient Egypt, where it was used as a carpentry term for how things fit together, seamlessly, to create containers. “I loved the idea that I could think of the work in terms of being a container for something ancient, universal, or deep in the subconscious or from another realm.”

Originally from Hartford, Connecticut, she came to Albuquerque in 1989 to study art therapy at the University of New Mexico. She made the city her permanent home. “I’ve always been a visual artist,” she says. “I got my bachelor’s in art history, partly out of an attempt to be practical, which is not very practical. For my graduate degree, I got into various MFA programs, but I decided to do the art therapy degree because, again, I thought I would be more practical. In the end, that wasn’t the case, because I didn’t end up being an art therapist.”

While still in school, she studied Jungian psychologist James Hillman, whose writings had an impact on the creative direction of her work. “He was an archetypal psychologist and wrote a lot about contemporary culture in relation to myths in the collective unconscious. That was really interesting to me. I loved studying it, and it definitely nurtured me as an artist, but I found that my temperament wasn’t suited to working in psychiatric hospitals, and that’s where the majority of the jobs were at that time.”

The past informs the present

Dovetail’s 18 works, which are no bigger than about 33 inches square, contain motifs common in her work. Among those are animal imagery and hybrid forms. In Boxer, there’s the snake. In Low Hanging Fruit, there’s the figure of a woman with a bird’s head. In Pilot, there’s a winged tiger with the head of a female aviator. Such chimeric imagery, she says, derives from the idea that not only do we share this world with other animals, we are animals ourselves.

Much of the photographic and printed material she works with comes from vintage magazines that she finds at antique stores. She also meets regularly with a collage group — “People Who Cut Sh*t Up” — whose members often share materials. She creates each piece using a layering process, starting with acrylic under paint in vibrant, neon-like colors, and then adding the collage. She seals the composition with a gel medium and then paints over it with oils. The process creates a luminous quality and a sense of depth. “All three of those steps are part of the process,” she says. “If I skip any of them, it doesn’t come out right. If I just do a collage on a whiteboard, then do the oil painting, it just doesn’t have the depth like when I have the acrylic painting underneath.”

The figures in Sbarge’s work feel like they inhabit the space they’re in. The landscapes are stark, open spaces with maybe a hint of grass in the foreground or a mountain on the horizon. Her compositions are reminiscent of the mixed media work of New Mexico-based photographer Holly Roberts. Although Roberts’ imagery often tends more toward abstraction or has a darker spirit, both artists are known for blending disparate imagery.

A two-person show of Sbarge’s and Roberts’ work is scheduled to open in January 2021, at the Turchin Center for the Visual Arts at Appalachian State University in North Carolina.

“Part of the reason that I wanted to show their work together is that Suzanne was one of Holly’s students,” says Mary Anne Redding, assistant director and curator at the Turchin Center. “You can definitely see the influence. What their work does is it creates these surrealistic environments, landscapes, where the human element is really conjoined with a natural element in a really beautiful, lyrical way. It subtly talks about how interconnected species are on the planet and, also, how fragile we all are, given climate change and all the things that are happening right now. That’s one of the strengths of Sbarge’s work.”

From empty space to art space

516 Arts is currently showing the exhibition Species in Peril Along the Rio Grande (through Dec. 28), in which artists respond to ecological conditions that have led to the decline of flora and fauna within the Rio Grande watershed. The show is part of a series of regional programs taking place in several states in the American Southwest and Mexico that address this issue and was organized by 516 Arts and the Art & Ecology program at the University of New Mexico.

Sbarge’s engagement with the contemporary art space began in 1999. At the time, she was running Magnífico Arts, a nonprofit that organized creative programs throughout the city but had no permanent venue of its own. “It operated out of the Convention and Visitors Bureau offices,” Sbarge says. That year, however, the UNM Art Museum closed a satellite space it had operated at 516 Central Avenue SW, in downtown Albuquerque. And that opened the door for Magnífico to take over the site.

For the next few years, most of Sbarge’s time was taken up by fundraising for Magnífico, which left little room for her own work. She left in 2003, with no intentions of getting back into arts administration. “The fundraising pressure was too draining,” she says. “I left them with like a year’s worth of money in the bank. A year and a half later, they folded.”

She spent the next three years freelancing, doing graphic design, and working on her own projects. One of her clients was the McCune Charitable Foundation in Santa Fe, which was involved in an effort to help Albuquerque revitalize its downtown. They brought in Sbarge as a consultant. “Out of that process they asked me to start something new in that building. I didn’t say yes right away because it had taken me a long time to get out from under it, and I was trying to put that behind me. But it was a different experience working with the foundation, and we were really close partners. I’d never had a funder come to me and say, ‘We want to give you money to do something.’ I said we’d do it for two years and see what happens. We’d do it as an experiment.”

Thirteen years later, Sbarge is still there, and 516 Arts has become one of the city’s most high-profile art venues.

“I feel very fortunate that 516 Arts is in my hometown,” says Augustine Romero, who works for Albuquerque’s Public Art Urban Enhancement Division, curates the KiMo Theatre Gallery, and manages the South Broadway Cultural Center. “516 Arts has done an excellent job in getting that area on the map. The fact that they’re there brings in a lot of people and creates a good presence.”

Redding says of Sbarge, “I think it’s really amazing that she can find the time to lead one of the most dynamic arts organizations in New Mexico, and have a regional impact — which their current show does — and she still finds time to make her own work.”

Species in Peril is an ambitious project, and it’s one close to Sbarge’s heart. You are likely to encounter extinct or endangered flora and fauna in her work, which adds another dimension to the conflation of past and present: what once was but is no more and what is but may soon not be. The focus is always on the figures whose actions, no matter how seemingly absurd, hint at a narrative.

Sbarge, however, avoids taking too literal an approach when developing her imagery and tries not to invest them with specific meanings. She’s more intent on providing the impetus for viewers to create stories of their own. “I don’t want to be prescriptive in that process,” she says. “I feel like, if I can open up to the unconscious and share that, and facilitate other people opening up and going on an adventure with their imaginations, that’s good to me.” ◀