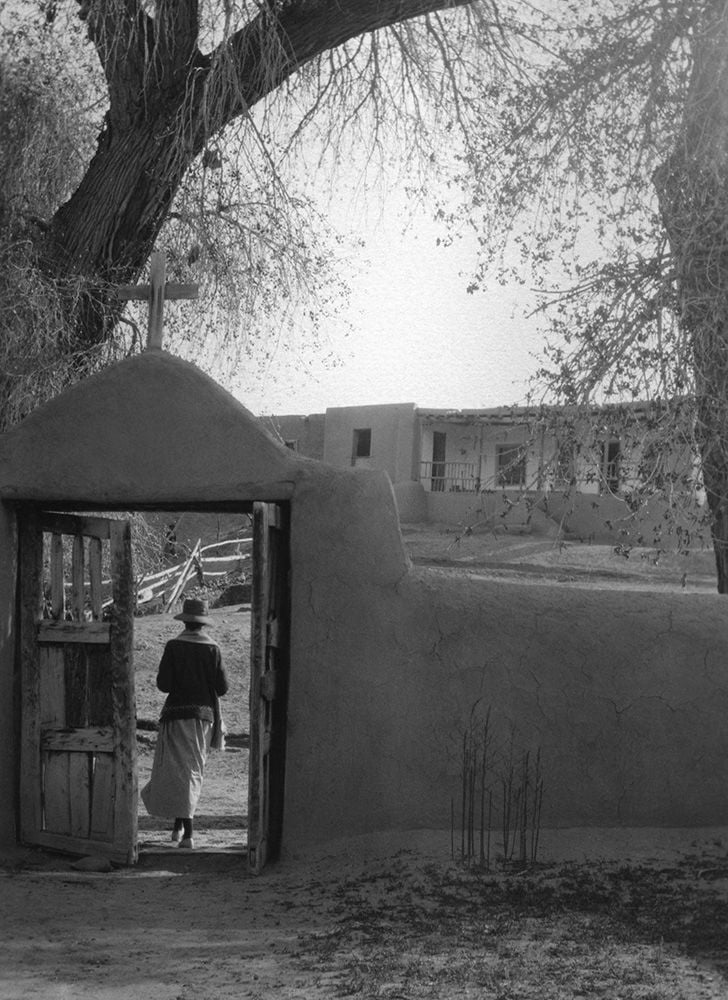 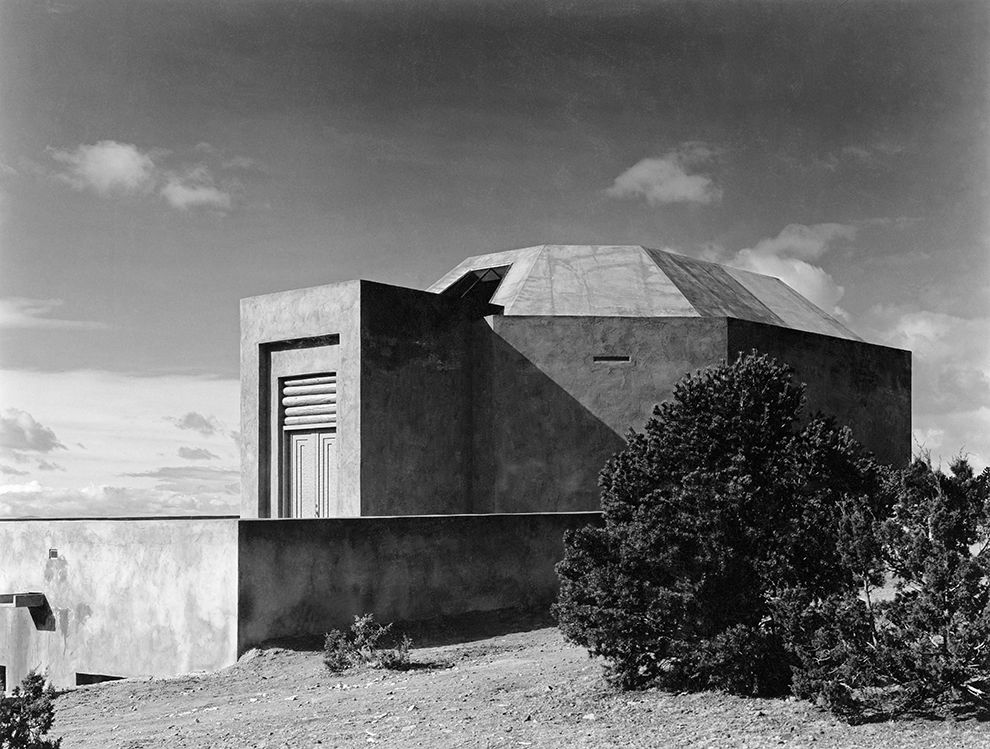 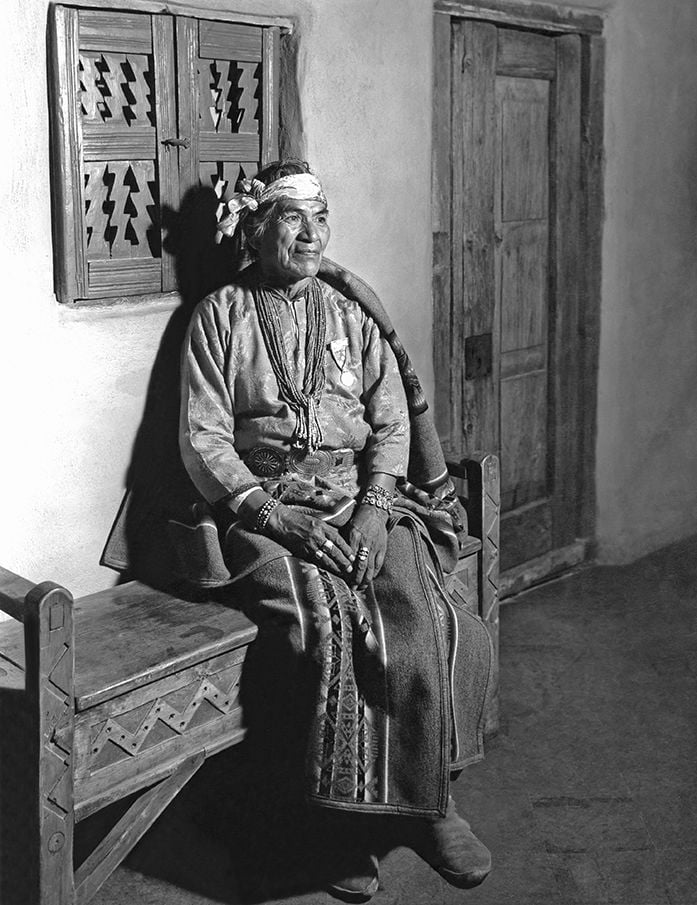 Hastiin Klah at the Century of Progress International Exposition, Chicago, 1934; courtesy the Wheelwright Museum of the American Indian 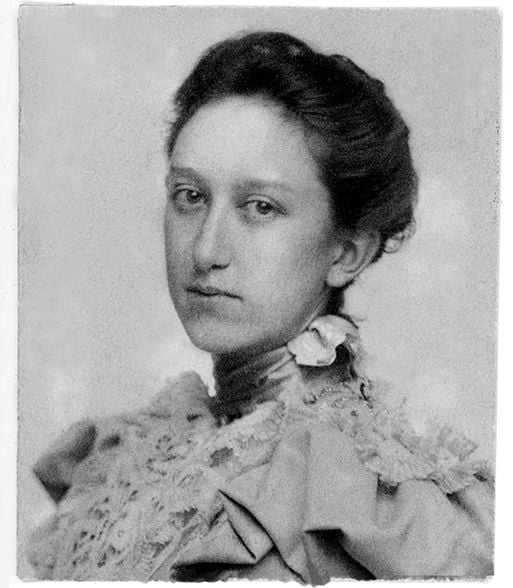 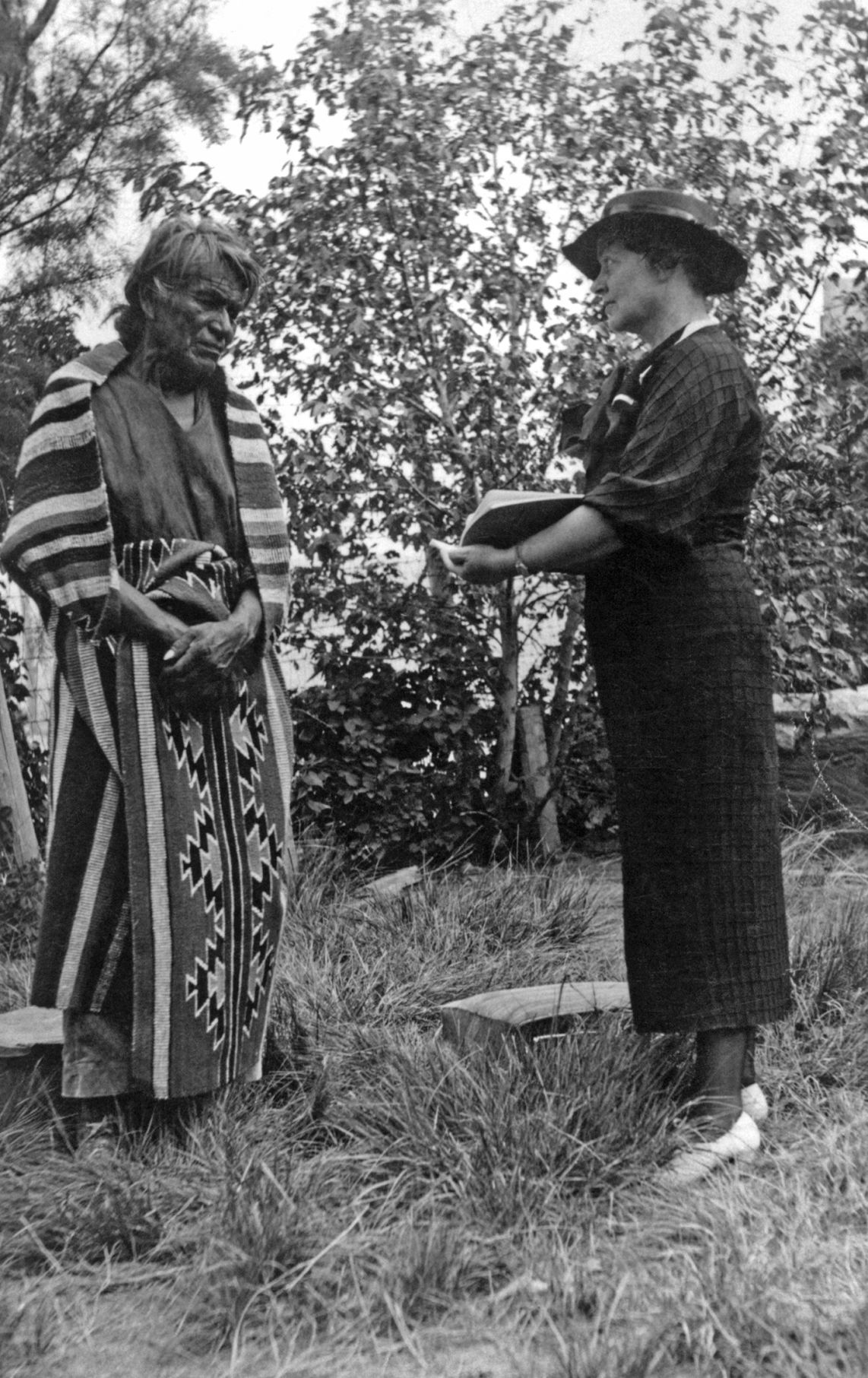 Hastiin Klah and Frances Newcomb, probably at Los Luceros, circa 1935; courtesy the Wheelwright Museum of the American Indian 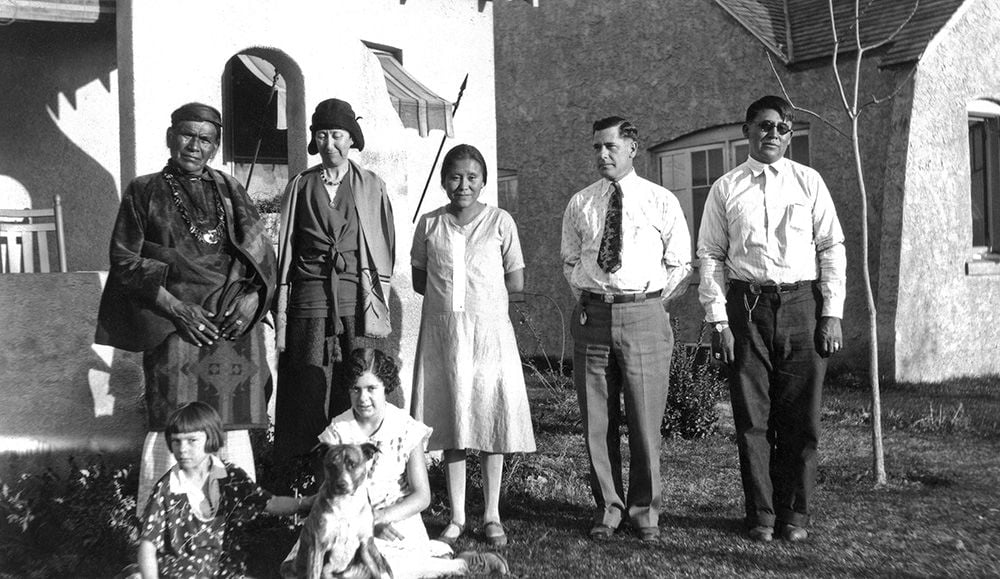 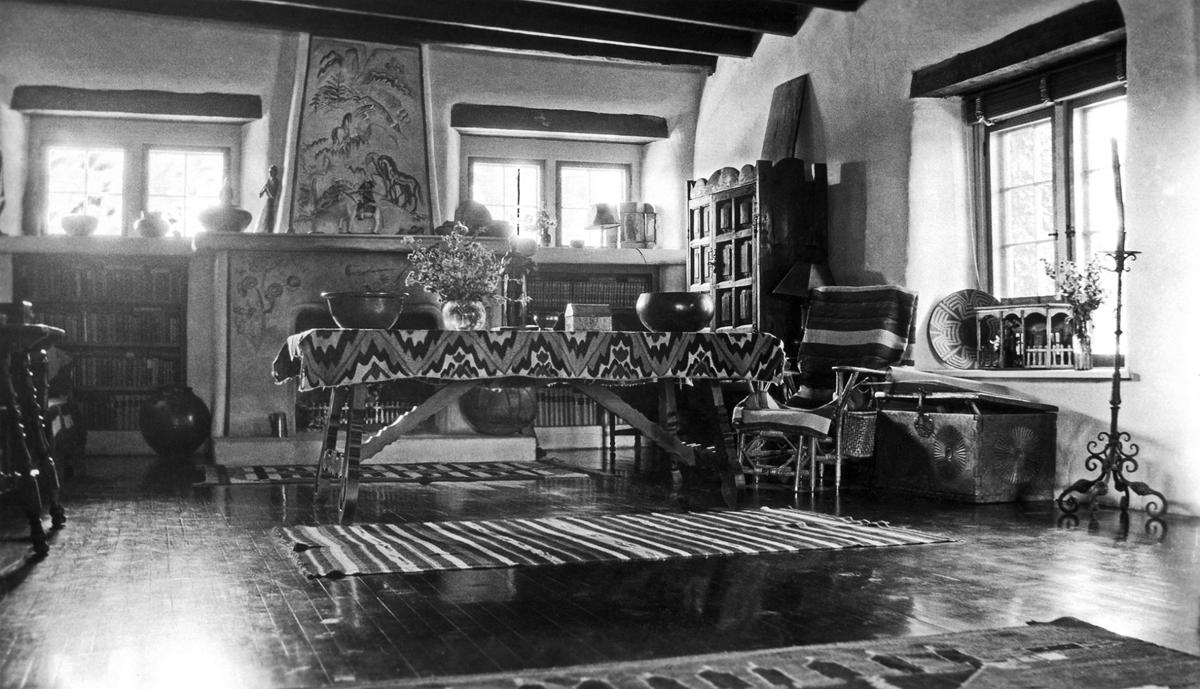 The sala on the second floor of Los Luceros, circa 1935; courtesy the Wheelwright Museum of the American Indian 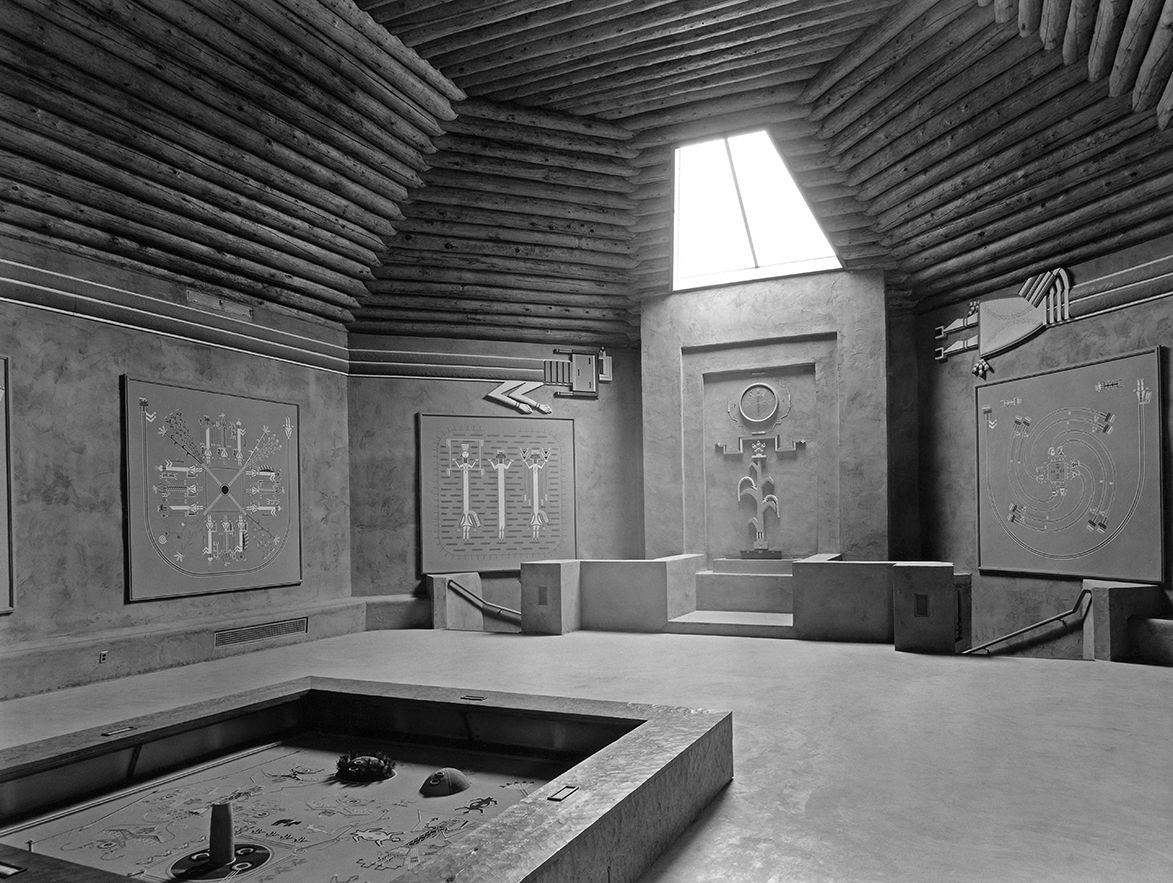 The first installation in the museum, with reproductions of sandpaintings oriented with the east at the top; photo Ernest Kee, courtesy the Wheelwright Museum of the American Indian

Hastiin Klah at the Century of Progress International Exposition, Chicago, 1934; courtesy the Wheelwright Museum of the American Indian

Hastiin Klah and Frances Newcomb, probably at Los Luceros, circa 1935; courtesy the Wheelwright Museum of the American Indian

The sala on the second floor of Los Luceros, circa 1935; courtesy the Wheelwright Museum of the American Indian

The first installation in the museum, with reproductions of sandpaintings oriented with the east at the top; photo Ernest Kee, courtesy the Wheelwright Museum of the American Indian

In the 1920s and ’30s, many Anglos believed that the United States government would wipe out all traces of Indian culture within a generation or two. Some well-intentioned, often wealthy individuals felt duty-bound to document and preserve elements of Native culture in order to educate people in the future about the nation’s past — so they set about recording indigenous language, song, and ceremony, and collecting ceremonial objects, art, and household goods for display in museums. Some were trained anthropologists and some, like Mary Cabot Wheelwright, a spinster from the Boston gentry, were self-taught.

Wheelwright developed an abiding passion for the Southwest after a family vacation to Santa Fe when she was a child. She later came to New Mexico for camping trips with cowboy guides. Through Frances and Arthur Newcomb, who owned a trading post in Nava, between Gallup and Shiprock, she met a Navajo medicine man and artist named Hastiin Klah, who became a close friend and collaborator on cultural preservation efforts. Wheelwright subsequently developed such an abiding interest in Navajo religious customs that she made it her life’s work to establish a museum dedicated to preserving them. Now known as the Wheelwright Museum of the American Indian, it was co-founded with Klah in 1937 as the House of Navajo Religion, a subject deemed academically unserious by the anthropologists of the day. In Mary Wheelwright: Her Book, a biography by Leatrice A. Armstrong recently published by the Wheelwright Museum, it is made clear that Wheelwright had no patience for those with such a limited point of view.

“Mary was a Unitarian, and I think that’s what allowed her to have a more open approach to religion and spirituality,” Armstrong told Pasatiempo. “I don’t think Hastiin Klah saw her in a threatening fashion because she convinced him that she was just curious about what he believed. She was immersed in the necessity of understanding that religion played an important role in Navajo day-to-day life, which the men at the Laboratory of Anthropology just didn’t understand.”

The Laboratory of Anthropology, which is now part of the Museum of Indian Arts and Culture, was the original intended home for Wheelwright’s museum. It was only after a protracted battle with the laboratory about the museum’s purpose that Wheelwright ultimately chose to withdraw her financial gift and independently establish her museum. (Though it is located on Museum Hill, the Wheelwright Museum of the American Indian remains independent and is not part of the New Mexico museum system.) The lab was considered a scientific endeavor, and Wheelwright had no formal education. She was also seen as eccentric and difficult; her Boston Brahmin accent and imperious bearing were off-putting to the lab’s trustees. “Not all of them were anthropologists by trade, and many of them were more than a little cruel with their comments about Mary,” Armstrong said.

It is perhaps fitting that Wheelwright’s life story was not written by a career biographer. Armstrong, who is originally from Ohio, moved to Santa Fe in 1994. Soon after, she began volunteering at the Wheelwright Museum, which eventually led to a 20-year career at the institution as the education coordinator and then as the assistant to the director, Jonathan Batkin. A former director, Susan Brown McGreevy, had begun biographical research on Wheelwright in the 1980s, but her interest had waned over the years and she was ready to hand off the project. She met Armstrong and Batkin for lunch in 1998, a supposedly casual get-together at the Pink Adobe at which Batkin and McGreevy told Armstrong that she should be the one to write the book.

“When I first agreed to do it, I thought I could get it done in three years,” Armstrong said. She did not consider herself a writer and had certainly never written a book. “And it’s not like my term papers in college were all that great,” she added. It turned into a 15-year odyssey that involved quite a bit of travel to New England and around the Southwest to visit archives and interview family members and associates of Wheelwright, who died in 1958. Armstrong retired from the museum in 2015. Though she has been asked what she plans to write next, she insisted to Pasatiempo that this is the only biography she will ever undertake.

Wheelwright was one of many notable women who came to the Santa Fe area in the early part of the 20th century, a group that included ethnomusicologist Natalie Curtis Burlin, painter Alice Klauber, and Carol Bishop Stanley, the founder of Ghost Ranch, as well as the more well-known figures of Georgia O’Keeffe and Mabel Dodge Luhan. Wheelwright, however, never actually lived in New Mexico but only came for a few weeks at a time, twice a year. She bought Los Luceros ranch near Alcalde in 1923, and the ranch became a retreat for many artists and writers, including Maria Chabot. Chabot, who hailed from San Antonio, was not wealthy and tended to rely on those who were for room and board. She had a close relationship with Wheelwright, despite, as her correspondence with others reveals, seeming to resent just about every aspect of Wheelwright’s personality, especially her tendency to talk too much and her habit of giving cutesy nicknames to everyone and everything.

The chapter on Chabot, who tried to turn Los Luceros into a working farm despite not really knowing how to grow produce on such a scale, is Armstrong at her best, reveling in the friction and drama that existed between these two stubborn and determined women. Armstong, adept at capturing the nuances of very flawed people, does not shy away from painting Wheelwright as demanding and entitled, or from depicting the Anglo-led efforts to save Indian culture from sure extinction as paternalistic, condescending, and even racist. Wheelwright, along with many like-minded peers, saw fit to impose standards of quality and authenticity on Native art through the Association of Indian Affairs. Though the ostensible aim was to set truly Native-made art apart from the suspect goods sold in curio shops — and to ensure that artists earned as much as possible for their work while preserving their culture — the enforcement of values and standards by white collectors of Indian arts has been seen by many in Native communities not as benevolent assistance but as a manifestation of colonialism.

The House of Navajo Religion was renamed the Museum of Navajo Ceremonial Art shortly after it opened in the 1930s, and renamed the Wheelwright Museum of the American Indian in 1977, the same year the institution voluntarily repatriated ceremonial items to their tribes of origin. “The repatriation forced a change in the museum’s focus,” Armstrong writes in the book’s epilogue. “No longer would the gallery exhibitions include ceremonial drypaintings; no longer would a predominantly Euro-American staff ‘explain’ Navajo spirituality to visitors.” The museum now exhibits contemporary arts, crafts, and other items from established and emerging Native artists, and retains its focus on Navajo culture.

Wheelwright was so insistent on the museum’s particular mission that one cannot help but wonder what she would have thought of repatriation and self-determination — of a United States in which Indians have not disappeared and never had any intention of doing so, despite the government’s concerted efforts to the contrary.

“I think she would be glad the museum was able to preserve the objects up until the time of repatriation, so a new generation could take them. She would be totally appreciative that the Navajo Nation now has the resources to control their history and their knowledge,” Armstrong said. “In hindsight, we might think of her as being racist, but at that time, and with the politics that were involved between the United States and Native communities, if she hadn’t done what she’d done, what would be the status now? Would that knowledge have been perpetuated or would it have been lost?”

“Mary Wheelwright: Her Book” by Laetrice A. Armstrong is published by the Wheelwright Museum of the American Indian.

Wheelwright had no formal education. She was also seen as eccentric and difficult; her Boston Brahmin accent and imperious bearing were off-putting to the Lab's trustees. "Not all of them were anthropologists by trade, and many of them were more than a little cruel with their comments about Mary," Leatrice Armstrong said.