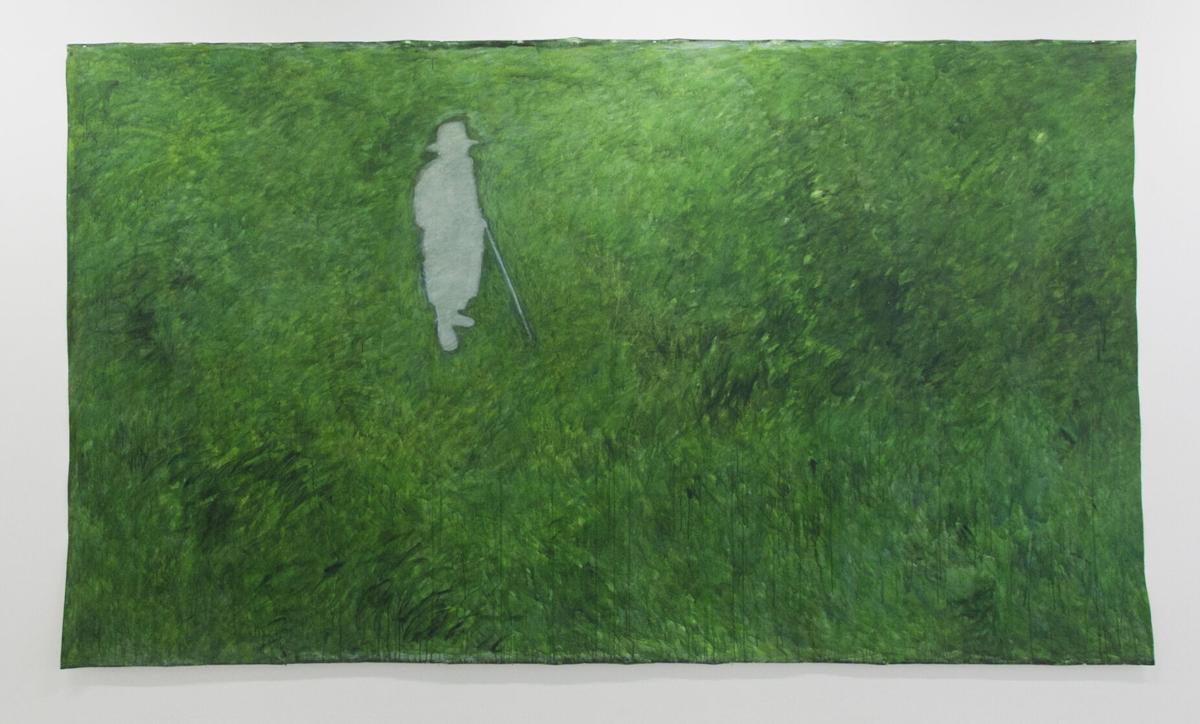 Green Field (1989), acrylic on canvas; © May Stevens; courtesy the estate of the artist and RYAN LEE Gallery, New York 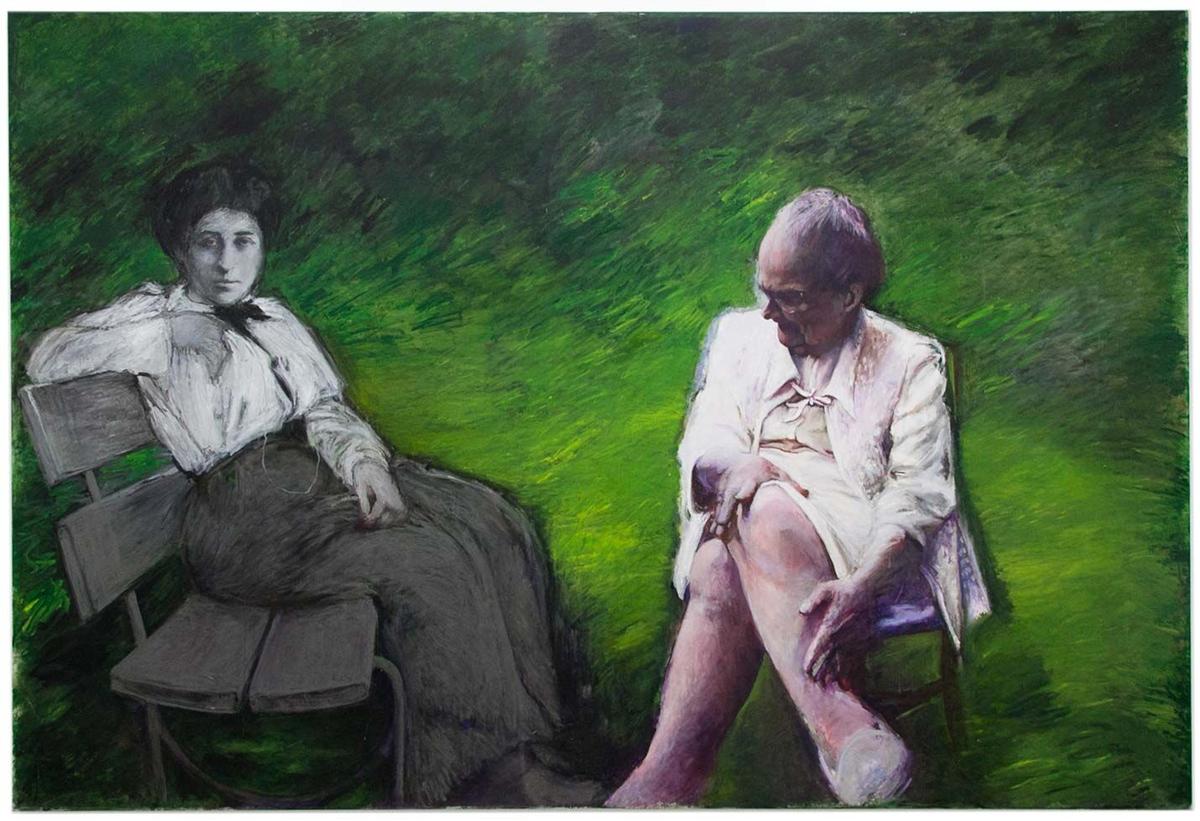 Forming the Fifth International (1985), acrylic on canvas; © May Stevens; courtesy the estate of the artist and RYAN LEE Gallery, New York 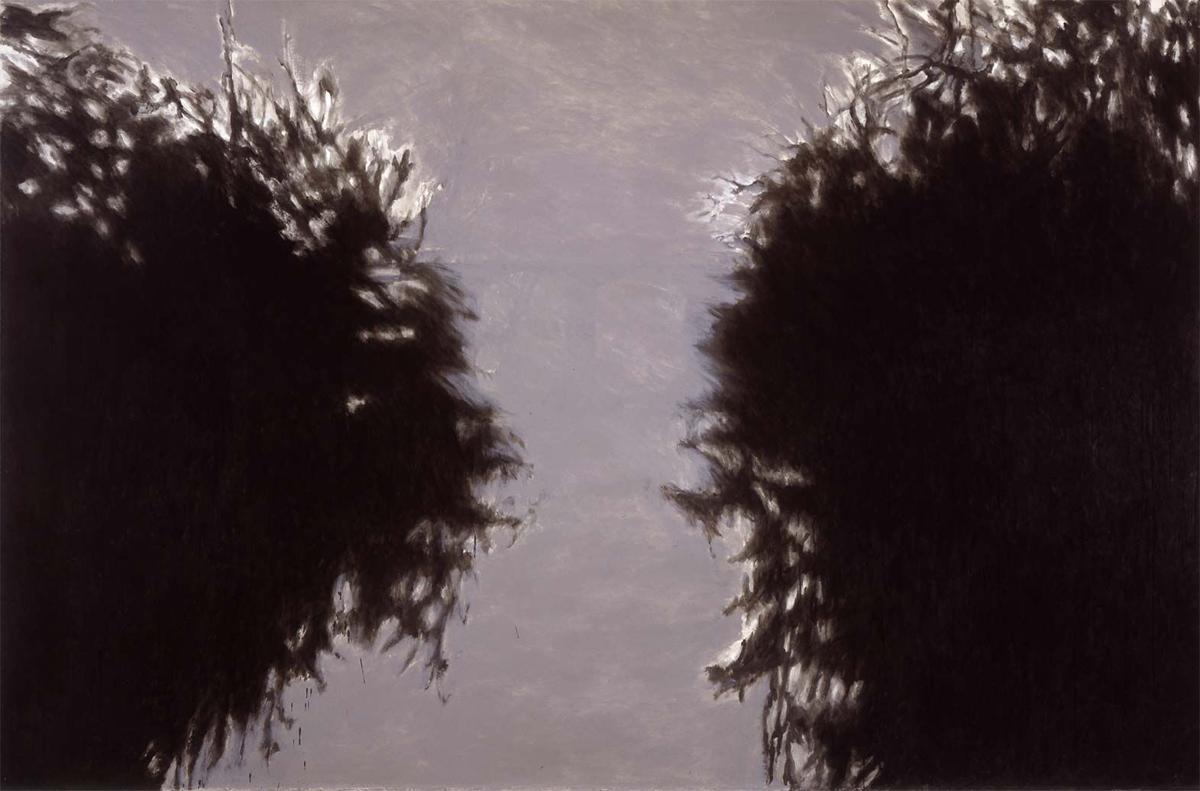 The Canal (1988), acrylic on canvas; © May Stevens; courtesy the estate of the artist and RYAN LEE Gallery 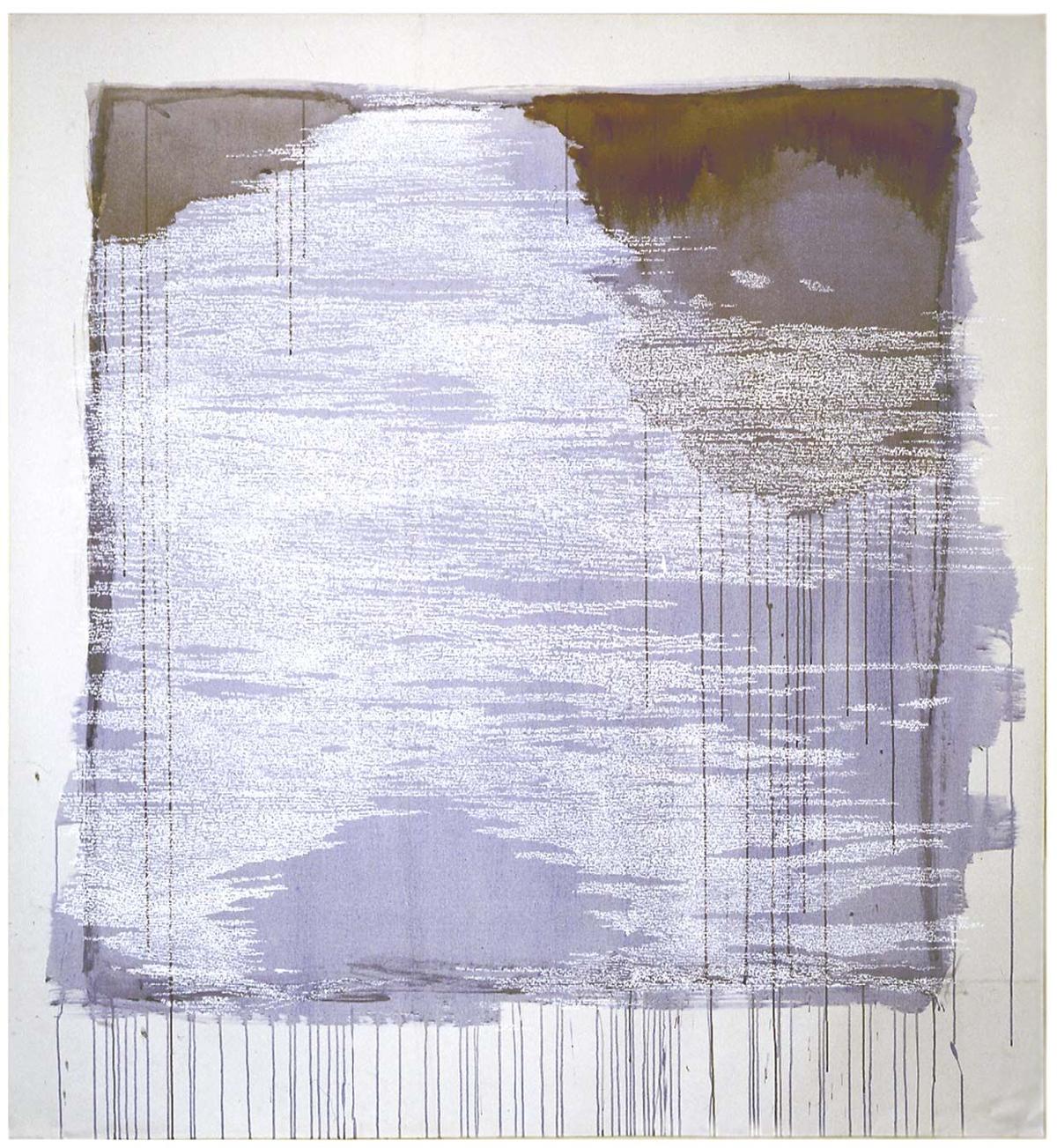 This Is Not Landscape (2004), acrylic on canvas; © May Stevens; courtesy the estate of the artist and RYAN LEE Gallery, New York

Green Field (1989), acrylic on canvas; © May Stevens; courtesy the estate of the artist and RYAN LEE Gallery, New York

Forming the Fifth International (1985), acrylic on canvas; © May Stevens; courtesy the estate of the artist and RYAN LEE Gallery, New York

The Canal (1988), acrylic on canvas; © May Stevens; courtesy the estate of the artist and RYAN LEE Gallery

This Is Not Landscape (2004), acrylic on canvas; © May Stevens; courtesy the estate of the artist and RYAN LEE Gallery, New York

Paintings have subtext. They have themes that are personal to their creators, which are sometimes biographical, sometimes communal, and sometimes universal. May Stevens (1924-2019) was an artist whose work bridged all three. And it isn’t necessary to understand, or even know about, the first in order to appreciate SITE Santa Fe’s SITElab exhibition May Stevens: Mysteries, Politics and Seas of Words.

This thoughtfully selected and arranged body of work spans several critical periods in Stevens’ career and features work from the series Freedom Riders (1963-1964), History Paintings (1974-1981), Big Daddy (1967-1976), Ordinary/Extraordinary (1976-1991), and Sea of Words and Rivers and Other Bodies of Water (1990-2006). It is not, however, didactic in its approach to subject matter and avoids spelling out for the viewer Stevens’ artistic development or evolution in the manner of a typical retrospective. The work speaks for itself.

Co-curated by art critic and activist Lucy R. Lippard and SITE’s Assistant Curator Brandee Caoba, who both maintained personal and professional relationships with the artist, you might expect to see more of an emphasis on biography. But when a body of work is powerful enough, it isn’t necessary, and the curators seem keen to avoid it.

Stevens was an artist, writer, and political activist and is known for her work on themes of social injustice, the civil rights movement, feminism, and the advancement of women in the arts. She was a founding member of the feminist political group Heresies Collective, which included Lippard and artists Harmony Hammond, Miriam Schapiro, and Joan Snyder. She was also one of the original Guerrilla Girls, a group of anonymous feminist artists that formed in New York City in 1985.

Stevens brought an empathy to the subjects of her art. Even at its most political, the work on view feels less like it was created to promote specific causes than to engage the emotions, for the artist to identify with her subjects, and broach the separation between her and her subjects in some unifying way.

The large-scale, acrylic canvases that dominate the exhibition, such as Green Field (1989), which is 84 by 144 inches, and the nearly as large Forming the Fifth International (1985), are nothing short of immersive. The former, from the series Ordinary/Extraordinary, commands the wall at the entrance to the show. The painting shows a ghostly figure — an afterimage of sorts — surrounded by a sea of green. It’s tempting to consider it as merely a figure in a landscape, but the feeling is more like that of a figure lost to time, traversing all-encompassing, fertile space.

Green Field corresponds visually with Forming the Fifth International, a well-known, if not seminal, work. The latter painting’s two female figures sit in the foreground of a similar ocean of green. The women are Stevens’ mother and Polish anti-war activist and philosopher Rosa Luxembourg (1871-1919). Here we have the likenesses of specific individuals, unnamed in the title. The context isn’t necessary for a subjective reading of the work. Luxembourg, a defiant, outspoken political force is rendered in grayscale, and Alice Stevens, a humble, working-class matriarch, is rendered in color. They’re positioned as if in dialogue. The dialogue, however, is a visual one, between past and present, youth and old age, and two symbols of patriarchal victimhood: one murdered for her beliefs and the other succumbing fully to the role of housewife and mother at the expense of her own self-determining interests and pursuits. The thread that connects them is the continual struggle to assert their own voices.

Stevens often took feminist ideals into conceptual directions, and she seemed possessed of an acute understanding of her human subjects, which were represented through metaphor. Her ability to convey that to the viewer, on purely visual terms, was nothing short of outstanding. Another large-scale work, The Canal (1988), also has a connection to Luxembourg. It’s a rendering of the canal where the body of Luxembourg, a left-wing activist, was unceremoniously flung following her execution by a right-wing German paramilitary squad called a Freikorps.

Again, the subtext in The Canal isn’t necessary for viewer engagement. It’s a somber work. Two dark masses appear at either side of a dull, flat body of water. But they could just as easily be the tangled hair of drowned individuals floating face down on the water.

Perhaps it isn’t possible to separate Stevens from her persona of feminist artist, but the exhibition proves she was much more. Understanding her significance to the feminist movement provides a crucial entry into a fuller experience and appreciation for her work, but the work itself transcends categorization. Those seeking greater context, which places her firmly in the volatile political and social scenes of the 1960s and 1970s, will find it in a separate room where Heresies member Joan Braderman’s feature-length documentary on the collective, The Heretics (2009), plays on a continuous loop. Copies of every issue of their groundbreaking publication, Heresies: A feminist publication on art and politics, are mounted in a display case lining three of the four walls.

It is significant that this historic aspect of the exhibition isn’t located in the art exhibition per se. It’s integral to Mysteries, Politics and Seas of Words, but it’s also just a facet. A facet, nonetheless, that can’t be severed from the jewel as a whole.

Heresies featured art and writing, both of which played essential roles in Stevens’ life. Here, words were also a basic element of her paintings. Often, words were rendered in small script across the canvas. They were not really intended to be read, except here and there perhaps, where snippets are legible. Rather, she seemed to use script as a kind motif or as a form of gestural mark-making.

One such painting on view, This Is Not Landscape (2004), is almost deceptive in its use of words as a visual element within the composition. They sparkle with silvery glimmer, like ripples on the surface of a lake. In fact, the immediate visual impression is that of a body of water in a landscape. But the viewer must contend with Stevens’ insistence, per its title, to the contrary. In this seeming contradiction between painting and title, one might glean an affinity between this work and Belgian Surrealist René Magritte’s The Treachery of Images (1929), in which the words “Ceci n’est pas une pipe” (this is not a pipe) appear below the painting of a pipe. If we can take a lesson from that, it’s that an artistic rendering of an object is not the object itself. In other words, a painting of a pipe isn’t something you can light up and smoke, and a painting of a landscape, replete with shimmering lake, isn’t a place where you can go fishing.

But you can, in a sense, dive in and go as deep as you want to go. And, for those seeking to engage their senses as well as their minds, Mysteries, Politics and Seas of Words provides ample opportunities.