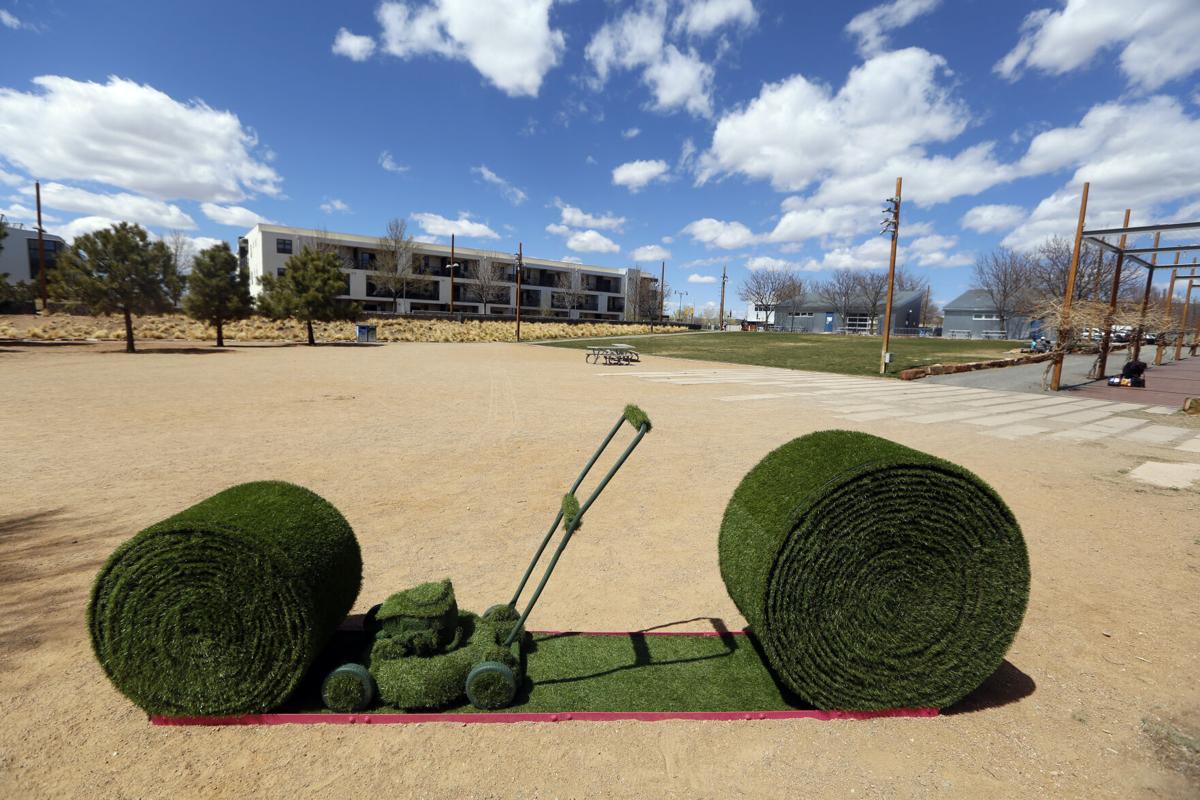 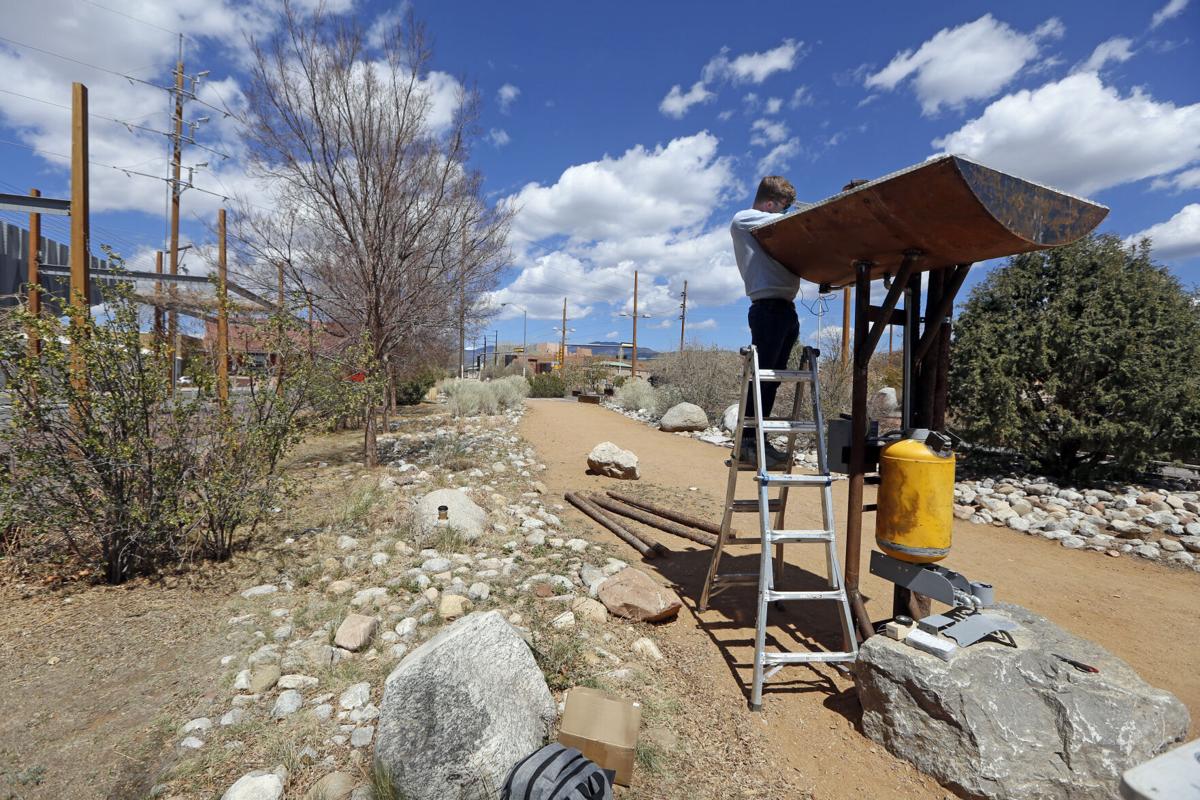 It’s not often that we think about the former life of utility poles, wooden desks and chairs, or railroad ties, for that matter. But at one point, they were all a part of the forest, with roots and branches — a life unconnected to the transformations wrought on them by humankind.

New Mexico sculptor Paula Castillo pays homage to that former life in All Felled, a public art project on view in Santa Fe’s Railyard Park. If you enter the park near the intersection of South Guadalupe Street and Paseo de Peralta, as you walk along the ramada, you may come upon these words, written in chalk along a stretch of the path:

I can read like a clock from here that my flesh and bones are somehow parceled with the bulging forests that surround us.

Castillo’s project is low-tech. Comprised solely of the chalk-written statement, it’s designed to slowly fade with time. It references the ties used in the laying of New Mexico’s railroad, which came from the state’s regional forests. They still surround us, only now they serve as transport pathways for railway passengers. For Castillo, who grew up near the Atchison, Topeka, and Santa Fe Railway in Belen, New Mexico, the railroad and its history are a subject of lifelong interest and an ongoing source of her artistic inspiration.

“I did a lot of research on that particular train track,” she says of the AT&SF. “Interestingly, Don Jose Felipe Chávez, the lobbyist for the [path] of that track — from New Mexico all the way to California — is from Belen. He was one of the wealthiest New Mexicans in the state at the time, which was the late 1800s. All of the ties were actually harvested near Jicarita Peak near Peñasco.”

All Felled is one of seven projects on view in the Albuquerque-based collaborative ArtPark21’s eco-art biennial, Urban Ecologies, which is presented in collaboration with the Railyard Park Conservancy and Railyard Art Project. Erected throughout the Railyard Park, each installation references the environment of New Mexico and the Southwest, some in obvious ways and others from a more conceptual standpoint. The work was juried from a selection of 13 artist proposals.

“We had the overarching theme of urban ecologies,” says John Davis, executive director of ArtPark21. “There are assorted interpretations of what that means, but we wanted that theme to be addressed with all of the work.”

The Railyard Park is one such urban environment, and it has its own ecological system of plant life. This was the basis for artist Hollis Moore’s Rootwalk, a zine with plant stories written by members of the Santa Fe community. It serves as a field guide for visitors to the park.

“Every place has many entangled and multifaceted stories,” Moore says. “Rootwalk provides insight into the personal, poetic, ecological, and activist stories associated with plants living within the Railyard Park. The stories in the zine aim to amplify admirable plant-human relations within our region.” Moore’s zine is available at the park’s community garden. As you wind your way through the park, look for the handmade flags indicating the plants’ locations.

Other installations include Lance McGoldrick’s multimedia project INDUSTRY, located by the performance green behind the parking lot for SITE Santa Fe. McGoldrick’s project is a seemingly mundane, rusted, water tank. But, inside the tank, visitors are treated to the illusion of a three-dimensional sphere produced by a large-scale kaleidoscope. This high-tech project uses coding, Arduinos, LEDs, and an LCD monitor to create the effect.

“The work is about our romance, and often destructive relationship, with industry and progress,” McGoldrick says. But it’s also about reengaging with our sense of discovery and play, which, he says, society values less than industry and hard work.

A park is a manufactured landscape, often combining aspects of nature with constructed elements, such as paved walkways, manicured lawns, tended gardens, and even public works of art. Into the mix comes TLC Art Collective’s Infinite Green, which is located in the park’s open field near the community picnic circle. Infinite Green is a long strip of artificial grass coiled into two large rolls, with a reclaimed push lawn mower, covered in the artificial turf resting between them.

“This material references idealized versions of natural beauty,” says TLC (artists Tiffany Black, Leticia R. Bajuyo, and Christine Wilson) in a statement about the work. “Our culture has a tendency to plasticize what we love in order to make its beauty last, manipulating organic materials to make them less susceptible to death and decay. Artificial grass provides the aesthetics of a happy homestead. But it does so at the cost of contributing chemical toxins to the environment and, eventually, piling up in our landfills.”

Unlike the majority of the installations, Richard Lowenberg’s Mushroom Economics, which is composed of approximately 300 small ceramic mushrooms, is located sporadically throughout the park. Placed in secret, under cover of night, Lowenberg intends for the visitor to “forage” for these mushrooms, which can be kept as tokens. But there’s a component of visitor participation that extends beyond a one-time park excursion. A message placed inside the hollow stems asks the recipients to provide contact information to the artist, so he can track the mushrooms’ economic paths in the community on an ongoing basis. He plans to develop a project website with an interactive map for tracking the mushrooms’ spread.

“Mushroom Economics, in a small way, attempts to address eco-networks and relationships creatively,” he says. “It is not politically motivated. Its purpose is to make people think and to have fun thinking differently about the gift economy, the creative commons, and about mushroom cultures. Mushrooms and trees carry out a radically grounded economic relationship. They trade fungibly processed minerals for photosynthesis-

refined sugars, while also adding value to other goods, services, energy, and information exchanges along their extensive mitochondrial networks.”

Artists Nicholas B. Jacobsen, Catherine Page Harris, and Laura C. Carlson collaborated on the project, a series of five earthen plinths supporting etched steel signs that evoke the Railyard Park’s own permanent signs. But, instead of celebrating the park, these signs reference uncomfortable histories often left out of public narratives, such as the colonial history of the railroad or the land originally being occupied by Indigenous Tanoan peoples. The earthen plinths are placed in various locations around the park.

Davis’ own project, A Drop of Water, is located by the rail gardens and is a sculptural installation composed of a vertical construction supporting a steel tank filled with tap water and an open basin for catching rain. A solar-powered network of electrical devices controls the flow of water to a depression in a nearby boulder. Sensors monitor the water level in the depression. If it runs dry, two ounces of water are released from the tank. The project highlights the fragility of water conservation in a region susceptible to drought.

“We’re trying to engender a certain amount of appreciation for the environment and, perhaps, have people pause and think about their connection with the environment, their behaviors, and how that relates to their position in the ecosphere here,” Davis says. “Fostering a sense of sustainability is one of the subtexts here. We think this park environment is the perfect setting to do that.” ◀

▼ For information contact the Santa Fe Railyard Conservancy at 505-316-3596, railyardpark.org