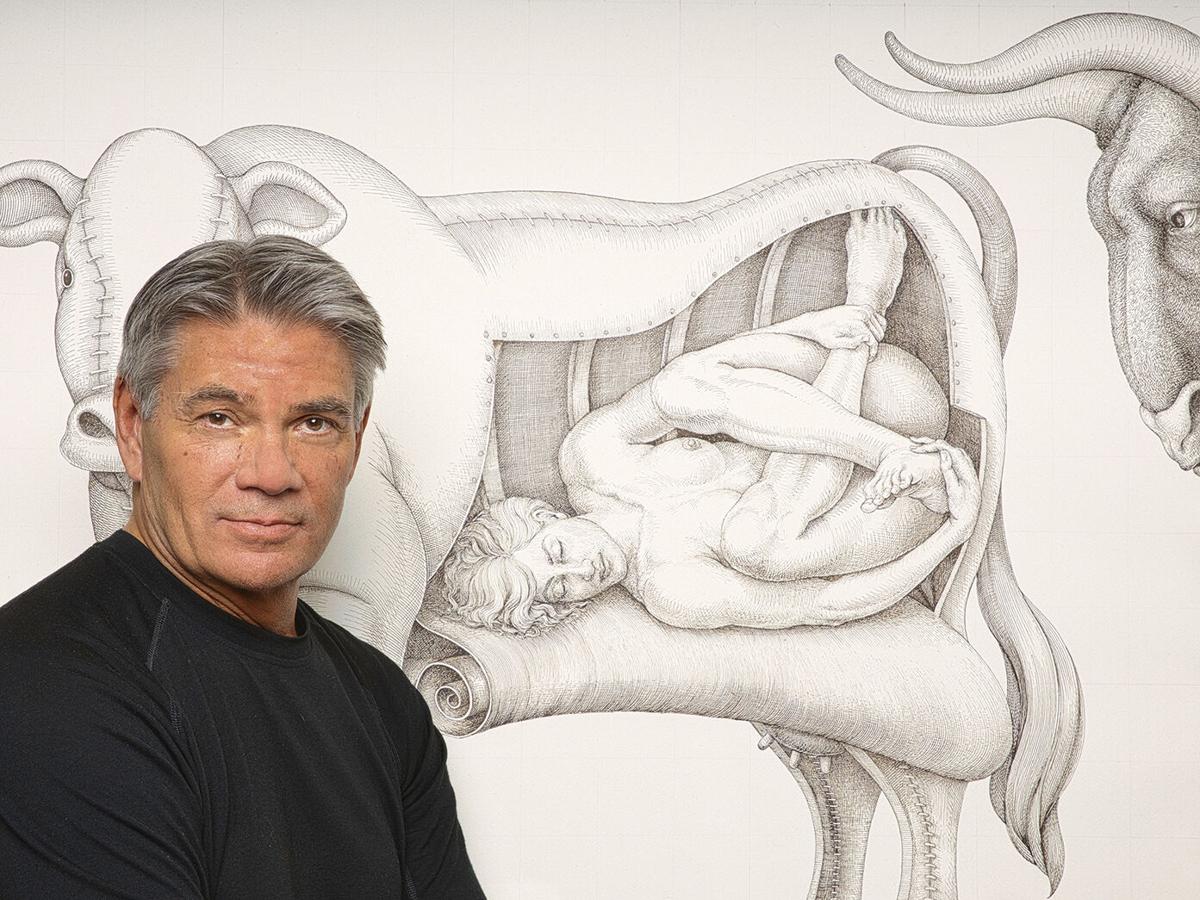 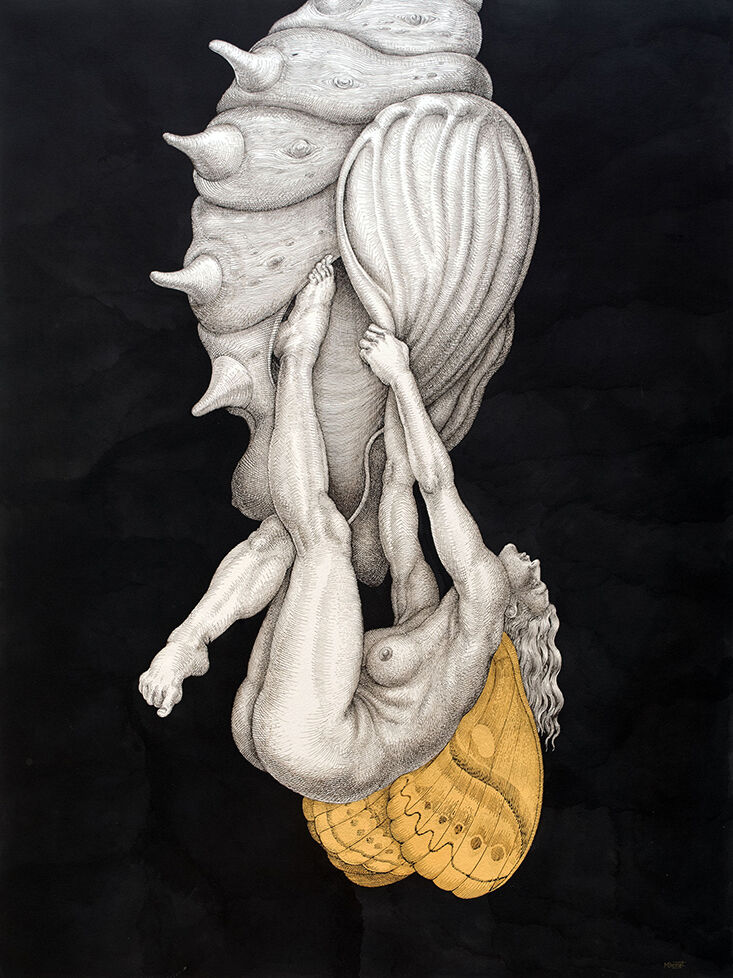 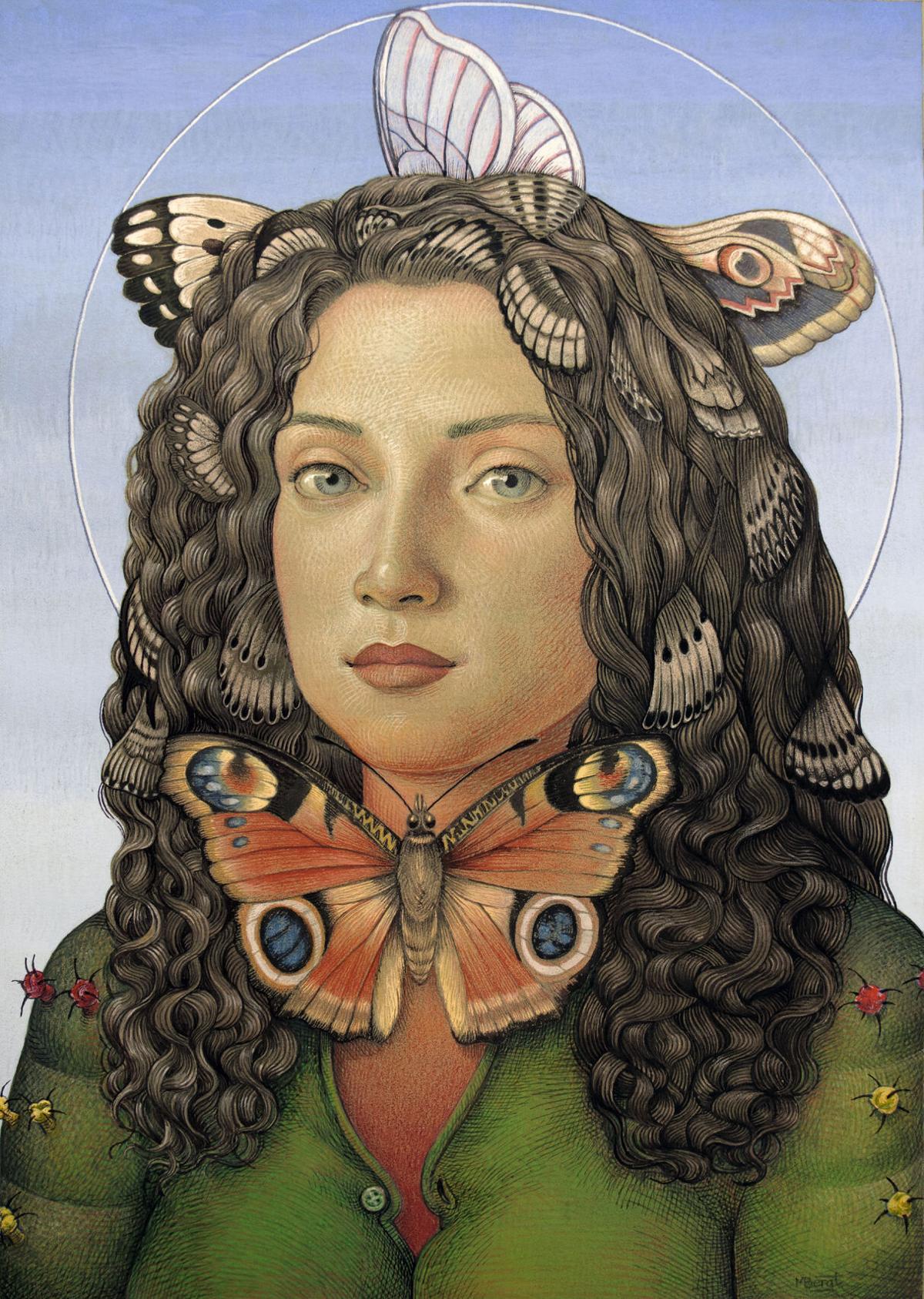 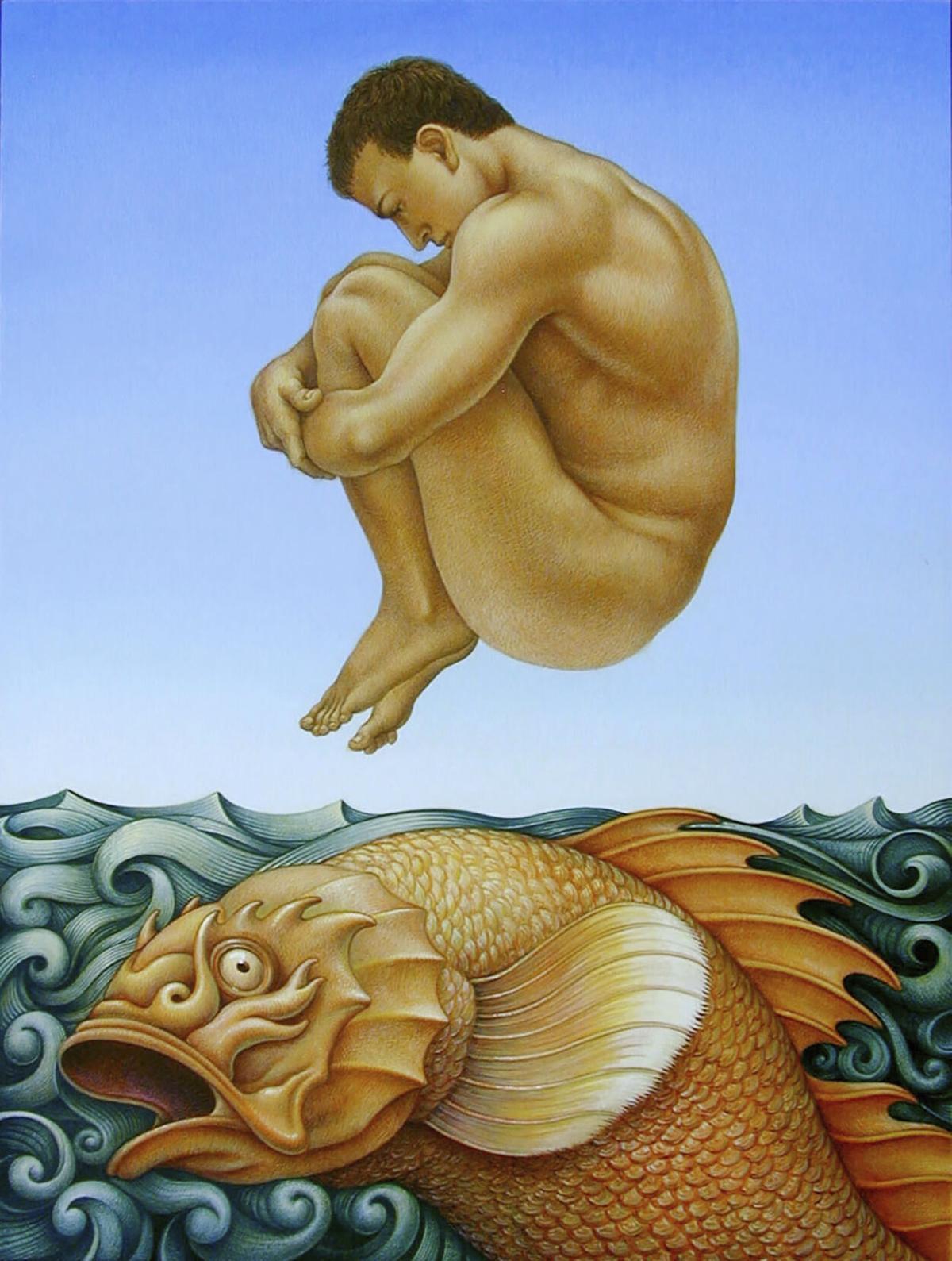 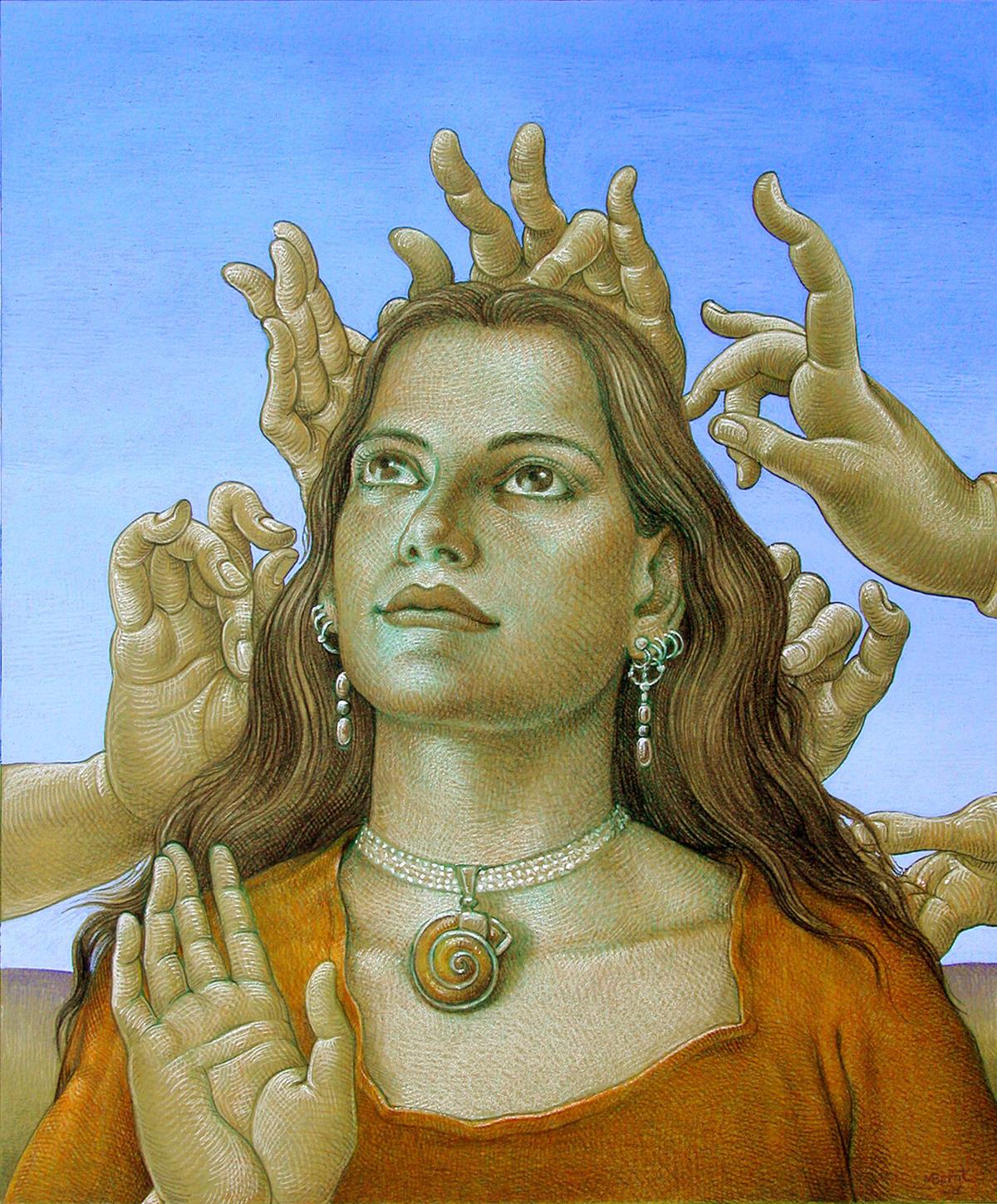 A winged female figure emerges, newly born, from a chrysalis. She clings desperately to the exterior of her wormlike shell, unwilling to let go. Rendered mostly in black and white, Michael Bergt’s ink drawing Chrysalis V does have some color: the figure’s gold-leafed wings. Except for that, it appears unfinished, echoing the figure’s reluctance to fully embrace what she’s become. Bergt is depicting a moment in flux. The figure is at the precipice of a crucial event: the moment when she learns that instead of falling, she can fly.

In this image, Bergt makes no overt reference to the current state of the world, one in which many are experiencing greater isolation. But the global pandemic is the spark that inspired it, as well as the rest of his Chrysalis Series, which was recently on view at Nüart Gallery (670 Canyon Road, 505-988-3888, nuartgallery.com), where he’s represented locally. A magical realism painter, Bergt is inspired by metaphor, myth, and archetypes, broaching universal themes that relate to the present moment, however obliquely.

“I don’t think we’ve ever lived in a juicier time than right now,” says the 64-year-old Santa Fe-based artist. “On every level possible, you have polarization, you have conflict. The whole Chrysalis Series came about with the idea that I don’t think we’ve ever had a time where — worldwide — we’re having to go into a pause, having to isolate, and not live our lives the way we’re accustomed to. The ripple effects of that over the collective has got to be enormous.”

In the world of nature referenced by the image of the chrysalis, a caterpillar goes into a kind of suspended animation, during which time it changes into a butterfly. But we can only guess at what humanity will look like when it emerges from its own period of stasis. “We go into this, we dissolve, and there is no coding to say what we’re going to come out as on the other side or morph into,” Bergt says. “How we process this time is going to determine how we will emerge. Something in the collective consciousness says that we cannot continue the way that we’ve been going. We had to have something that forced us to sit still and reflect and deal with whatever we need to become. I’m sure [psychoanalyst] Carl Jung would have said that whatever you don’t address in your psyche comes up and meets you.”

Bergt is a figurative artist, prolific painter, and drawer. In his studio, numerous works in progress line the walls. Stacks of hundreds of drawings, made from live models, rest on tables and chairs. He is mostly self-taught, and his decades of intensive studio practice have resulted in a mastery of a medium many consider extremely challenging: egg tempera, a fast-drying medium in which dry pigments are mixed with a binder, typically egg yoke. Although it was in use as far back as ancient Egypt, it became a prominent painting medium in the Byzantine Empire and early Renaissance Europe.

“For some people, it’s tedious because of the slow building up of layers,” he says. “The way I use it, with crosshatching, it seems like it’s even more tedious. But the fact is that you can work very quickly with it, and you can lay things in quickly. It really is much more flexible and forgiving than most people think. It’s just that it isn’t taught, so very few people use it.”

Bergt was born in Nebraska and grew up in Colorado. He’s been drawing since the age of five and began showing professionally in San Francisco in his early 20s. He never pursued an art degree. “At that time, a lot of the universities weren’t really advocating traditional painting techniques like life drawing and all the sorts of things I had a passion for,” he says. “So I mostly found other professional artists and learned from mentors.”

Among his mentors was artist Paul Cadmus (1904-1999), whose work is regarded as magical realism and who was known for primarily painting in egg tempera. Cadmus came to prominence in an era when realism and figurative painting were less favored than abstraction, particularly abstract expressionism.

“Paul Cadmus really created American magic realism,” says Bergt collector and gallerist Keith Townsend, who works for Nüart. “If you go to the Whitney [Museum of American Art] or the Metropolitan Museum of Art in New York City, you’re always going to see Paul Cadmus paintings hanging there. He took Michael under his wing early in his career. Michael has really continued a tradition of figurative painting that’s contemporary but has a magic realist slant to it. There’s no one else working like Michael out there today.”

Bergt was drawn to the somewhat mystical compositions in the work of Cadmus and other artists now associated with magical realism, such as George Tooker and Jared French. They weren’t realists, although their work was representational. They sought to capture something elemental and archetypal of the human condition in their work. They idealized the human form, not unlike their Renaissance forebears, who similarly worked with egg tempera.

“When I first started thinking of painting, I thought ‘Renaissance,’ ” Bergt says. “That, to me, was like the birth of real painting. But it really wasn’t. That was a manifestation that emerged out of Greco-Roman and many other styles that came before it. What fascinated me about the Early Renaissance, specifically, was that it was a blending of a much more mystical narrative — and it was representational. By the time you got to the High Renaissance, it was all focused on representation. It was about trying to create the most vivid, lifelike representation. I think they sort of lost that much more magic and symbolic quality that you got earlier on.”

Bergt’s early work from the late 1970s and early 1980s included landscapes and cityscapes, which he rendered in patterns that gave them a vibrational quality, and they dazzle the eye with their repetitions of linear elements and precision. But, for the past two decades, he’s worked almost exclusively with the human form. His work is narrative but open-ended, which gives viewers room for their own imaginations.

In The Wake (1998), for instance, a male figure in a small boat traverses the open sea, propelled onward by the wind billowing his sail. Because the action and setting are so nonspecific, the composition feels elemental. It could be any person out on the water. It could be the only survivor of a shipwrecked vessel, or it could be a figure from myth.

“I always reference mythological subjects or allegory, or archetypes,” he says. “I always play off of that because I think those are things that are consistent throughout art history. All we’re doing now is reconstituting them in our own way. Many times, I’ll go back to a certain theme like Sisyphus because it’s just this perfect metaphor for this endless struggle, this human condition. You roll that boulder up the hill only to find that it comes to the bottom, and you have to do it all over again. That’s something we all relate to. I like to mine those things because that’s what it feels like to be human.”

Throughout his career, he’s also returned to the subject of Leda and Swan time and again, as well as basing work on the Greek myths of Icarus and Europa.

Bergt pays great attention to the musculature system of the human form. He’s adept at capturing essential qualities of his subject’s likenesses, but he’s more invested in exploring the movement and gestural qualities of the figure. He uses a crosshatching technique to define and articulate triceps, scapulae, rhomboids, and spines. It’s rare to see such skill at rendering the human form in an artist with no formal artistic training.

“I think that 50 years from now, he’ll be looked at as one of the greatest American figurative painters of his generation because of his mastery of technique and his original voice,” Townsend says. “I’m saying that from a collector’s standpoint and not from an art dealer’s standpoint. People respond to it. When you live with it as I live with it, you get a sense that it’s truly timeless. I look at the pieces I have, and they could have been painted in the Renaissance, but they also feel contemporary.”

Bergt’s poised figures recall the human figure as represented in classical painting or even those of neoclassical artists such as Maxfield Parrish. Parrish’s work was similarly allegorical, although it was often made with a greater focus on surrounding environments and with more dramatic color tones. Bergt’s work, however, has a vibrancy of its own, which is something that comes from traditional, earth-based pigments used in egg tempera painting. Mixing similar dry pigments with oils produces saturated, darker tones, he says, whereas using egg yoke results in brighter colors.

“I first started using egg tempera seriously in about 1980. That was after I’d had a couple of one-man shows in San Francisco. I was doing small watercolors that were very pattern-oriented. It was a natural progression because the way I draw is very much about crosshatching and building in layers. It’s a draftsman’s medium because it dries so quickly that you need to have drawing skills. It’s very deliberate. It’s the closest thing to drawing in paint. That’s how I would describe it.”

Bergt paints both male and female figures. There’s an ambiguous quality to his compositions because of stylized backgrounds or settings in which the figures are placed. And for both figure and setting, he makes subtle references to artistic traditions in European and Asian art. In one, a man dives headlong into an ocean wave inspired by Japanese woodblock artist Hokusai’s The Great Wave off Kanagawa (circa 1829-1833) and in another, he alludes to the figures in Édouard Manet’s Olympia (1863), which was itself a reinterpretation of Titian’s Venus of Urbino (circa 1534). Bergt is attuned to the fact that no artists live in a vacuum. The times they live in and the art that came before them inform what they do.

“There are certain paintings that become these iconic images, like the Mona Lisa or the [ceiling of the] Sistine Chapel. We already carry in us a sense of what these represent. When you play with that and flip it somehow, you’re affecting something that’s already embedded in someone’s psyche. The reason that history coalesces around certain images is because it addresses something in us that’s universal.” ◀