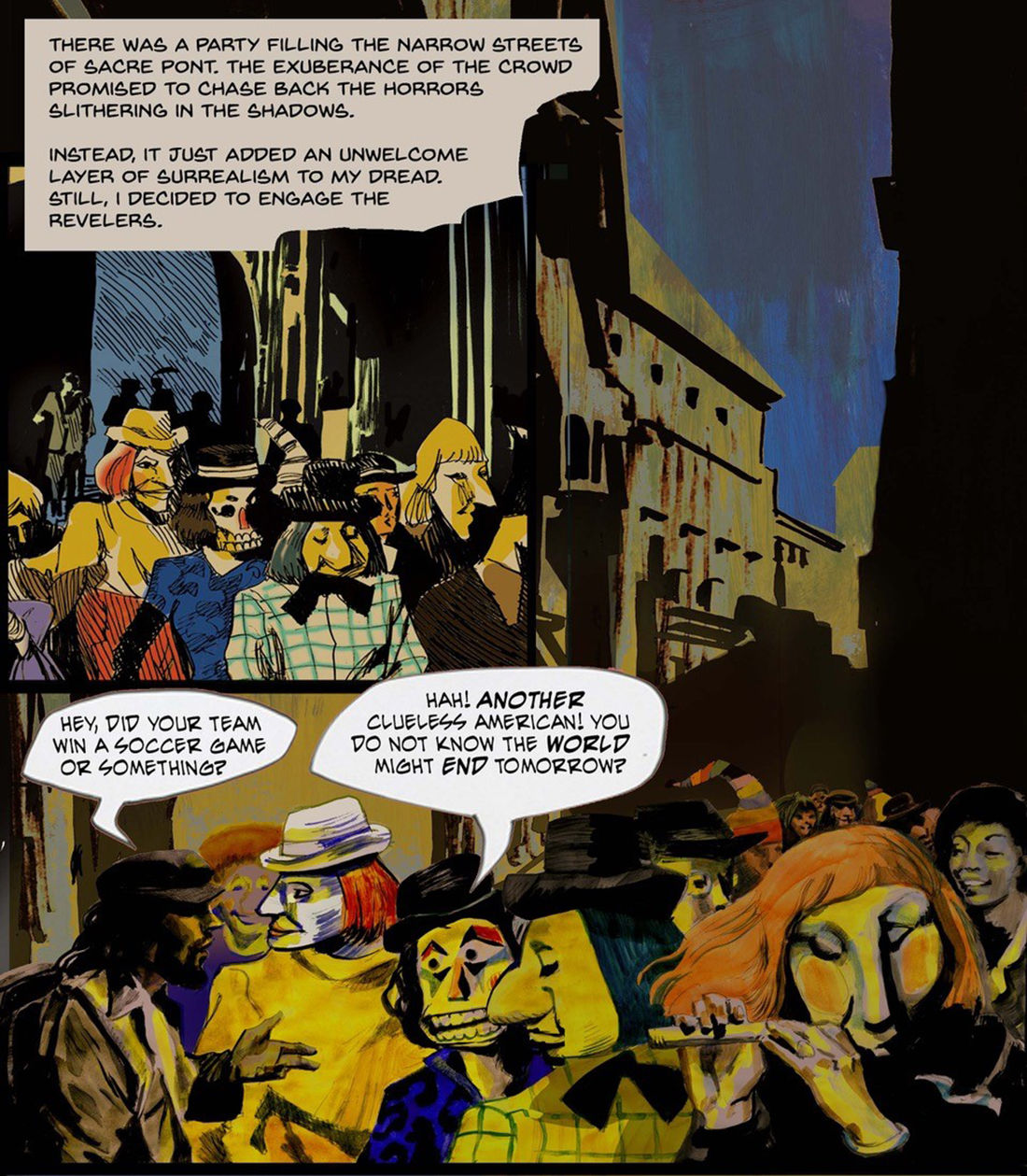 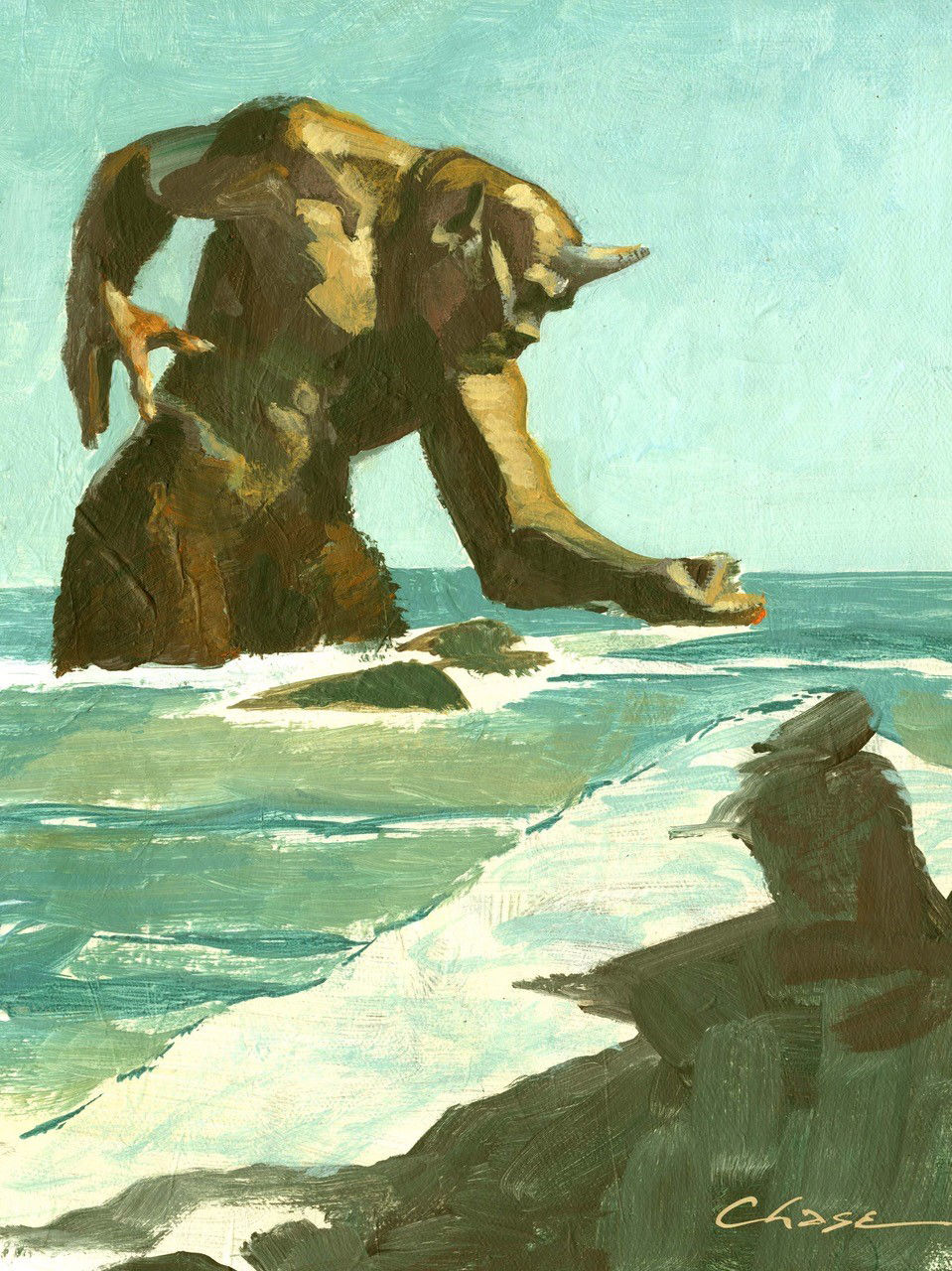 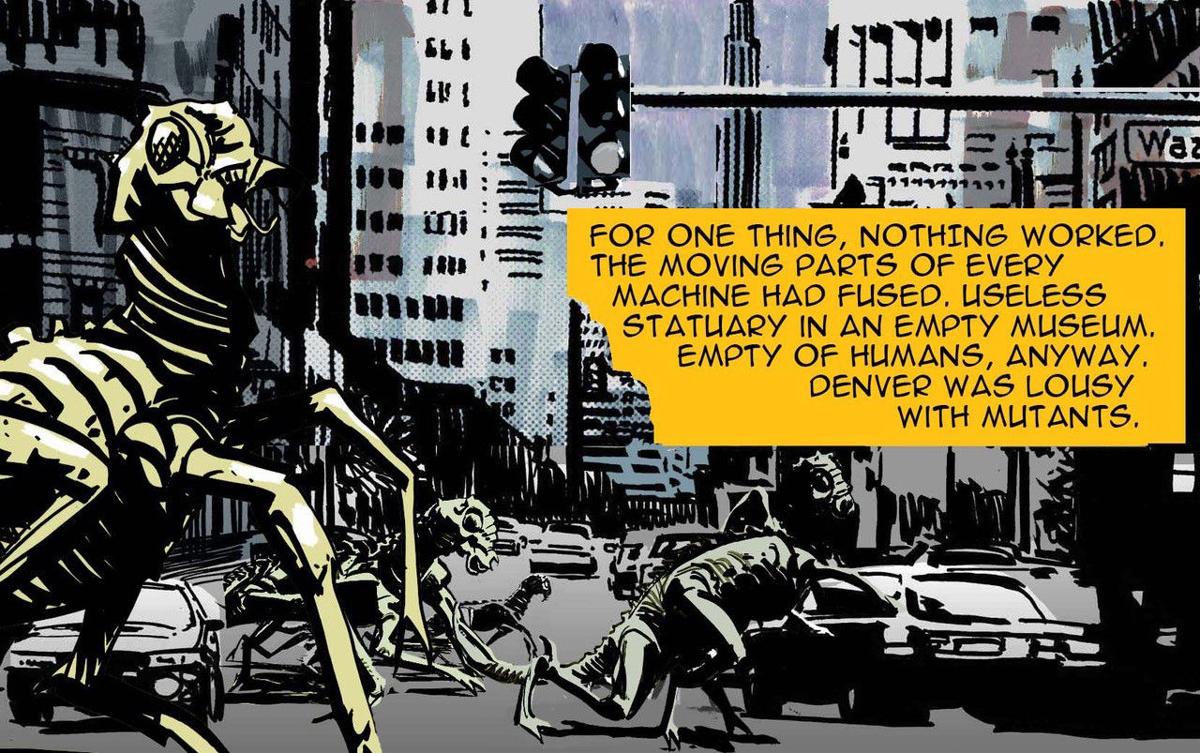 If you are familiar with the creatures envisioned by legendary stop-motion animators Ray Harryhausen and Willis O’Brien, you’ll recognize some of them in the pen-and-ink drawings and paintings of artist Jamie Chase: the enchanted snake woman and lumbering cyclops from The 7th Voyage of Sinbad; the Rhedosaurus from The Beast from 20,000 Fathoms; and the mighty King Kong facing off against the tyrannosaurus rex in the jungles of Skull Island.

A longtime fan of horror and science fiction cinema, Chase recreates these memorable monsters as a tribute to the art of stop-motion animation. They also serve as inspiration for his own stories, which he sets down in graphic novels and publishes under his own brand, Inks-Inc. He keeps his fans, collectors, and fellow fantasy film and stop-motion enthusiasts placated with a steady stream of works on paper that he posts to his Facebook page (facebook.com/jamiechasearts), which offers tantalizing glimpses into a new project.

As the world shut down and people began self-isolating during the pandemic, Chase threw himself into a work in progress called After Myth. The story combines elements of horror and sci-fi in an end-of-the-world scenario replete with fantastic beasts and themes of science gone awry that seem culled from today’s headlines.

“It’s totally not connected to the pandemic, and yet it sort of posits the idea of the world with way fewer humans on it,” says Chase, who lives in Santa Fe. “Of course, as long as I’m stuck here in my house within the zeitgeist of the pandemic, it seems like the right project to work on. I probably should be doing something more uplifting and escapist, but this seems escapist enough and treats the whole thing as a metaphor.”

Chase’s drawings appear gestural. He isn’t striving for realism but a visual impression. There’s just enough detail to the images in After Myth to convey a sense of the action taking place. In one illustration, giant, mutated insects roam the streets of Denver. With just a few dark lines, you readily get the sense of the cars in the distance. In his work, foreground elements are often filled in with color while background details are desaturated or left black and white.

After Myth grew out of three earlier stories that Chase published in his Myx anthology, which contains several illustrated stories per issue. Each dealt with themes of global cataclysms but were unconnected. His idea for After Myth was to combine them into a single epic narrative.

“The first is about a guy who inadvertently kills this violinist who is keeping these demons from the outer dimensions at bay,” he said. “It’s loosely based off an H.P. Lovecraft story called ‘The Music of Erich Zann.’ I changed the ending from my original interpretation for the Myx comic. I realized that it makes a good segue for this other storyline in which the ex-vice president of the United States hooks up with some hookers and some of his executive friends in a bunker near Casper, Wyoming, then they set off a pulse bomb that’s specifically designed to kill people without hurting anything else.”

The third narrative deals with the Large Hadron Collider, a particle accelerator used to test theories in particle physics. When the scientists in After Myth amp up their search for the so-called “God particle,” a fundamental, universe-wide field that gives mass to all matter, they inadvertently bring forth the very demons that the violinist’s playing was keeping in check.

Chase, who’s 65, has a lifelong passion for narrative art. As a kid growing up in Sacramento, California, he imagined one day becoming an illustrator, maybe of comic books or science fiction book covers. “My first introduction to art was comic books,” he says. “I was always buying the books for the art. The stories were no great shakes in the early days of comics. They were okay, but the writing has improved immeasurably since then. Before I took my first painting lesson, I was trying to draw comic-book-type imagery.”

His interest led him to the Academy of Art University in San Francisco where he graduated in 1984. “It was basically more of a graphic design and illustration school. I was kind of the star pupil there because that’s where my talents lie: draftsmanship and all of that type of thing.” From there, he attended the San Francisco Art Institute and a new reality set in.

“I was shocked into realizing that the conceptual art of that day had nothing to do with narrative art at all.

I was relentlessly tormented in critiques as being some kind of character from another century or whatever. I resented that at first because I thought they’re really just dismissing the ability of people to draw. But it also forced me to consider Willem de Kooning and other artists that I didn’t really understand, who have now become heroes of mine.”

Today, Chase gravitates between nonobjective abstraction and figurative compositions, which dominates the kinds of work he shows in galleries, and the fantasy- and cinema-inspired fare that permeates his graphic novel work. “My other fine artist friends don’t even know what the hell to make of me because I seem like I’m trying to be a sophisticated abstract artist, but I’m also just a complete pop culture, low art aficionado.”

He’s represented at Mill Contemporary (644 Canyon Road, 505-983-6668, millcontemp.com) and also shows with City of Mud (cityofmud.com), which swapped its brick-and-mortar location for an online platform last winter. But, unlike the 10 years Chase spent in San Francisco, where he worked as a street artist (“It was the only rung of the ladder I could obtain”), he found an audience for his style of work in Santa Fe. “In San Francisco, I was going into galleries, and they were saying, ‘Come back when we’ve heard of you.’ There was no entry-level way to break into the market there. When I got out here, suddenly there were galleries that wanted to show my work.”

Chase first came to Santa Fe in the early 1980s as a housesitter for the home purchased by his sister, who was in the midst of relocating from Los Angeles. “I didn’t know enough about Santa Fe to realize what a home it was for the arts.”

You can see examples of his abstract work on City of Mud’s website. In them, he combines rectangular shapes and planes of color into compositions of remarkable depth. But his horror- and science-fiction-laden fare is where his imagination really runs wild. Take the heady mix of primitive man, reptilian beasts, and extraterrestrials that populate his serialized graphic novel, First World, which first saw publication in 2014. It was hailed on the blog The Great Comic Book Heroes (thegreatcomic bookheroes.blogspot.com) as a welcome throwback to the illustration styles used for comics based on the works of Tarzan creator Edgar Rice Burroughs or what you might have seen gracing the covers of old-time pulp magazines like Amazing Stories.

His graphic novels, which he prints himself, can usually be found locally at Big Adventure Comics (418 Montezuma Ave., Suite C, 505-992-8783,facebook.com/bigadventurecomics).

“First World is like a prehistoric One Million Years B.C. meets 2001: A Space Odyssey, in which aliens come to Earth and impregnate some of the primitive people that live here and create a race of more advanced humans,” Chase says. “It was a quantum leap for this one small group of characters. Cave people who were still in their own organic sphere of evolution were jealous of the abilities and intelligence of these other characters. That whole book was designed just so I could indulge my Ray Harryhausen fantasy of more dinosaurs, more monsters, and more creatures. It was like doing a movie with no budget constraints.”

If First World — or the forthcoming After Myth, for that matter — ever get optioned for the big screen, you can bet that Chase would want to see it done properly. That means a throwback, befitting the material, to an older style of practical effects. “I’d love for it to be done with stop-motion.” ◀

Great to a well written article discussing the amazing talent of one Santa Fe's most talented artists.