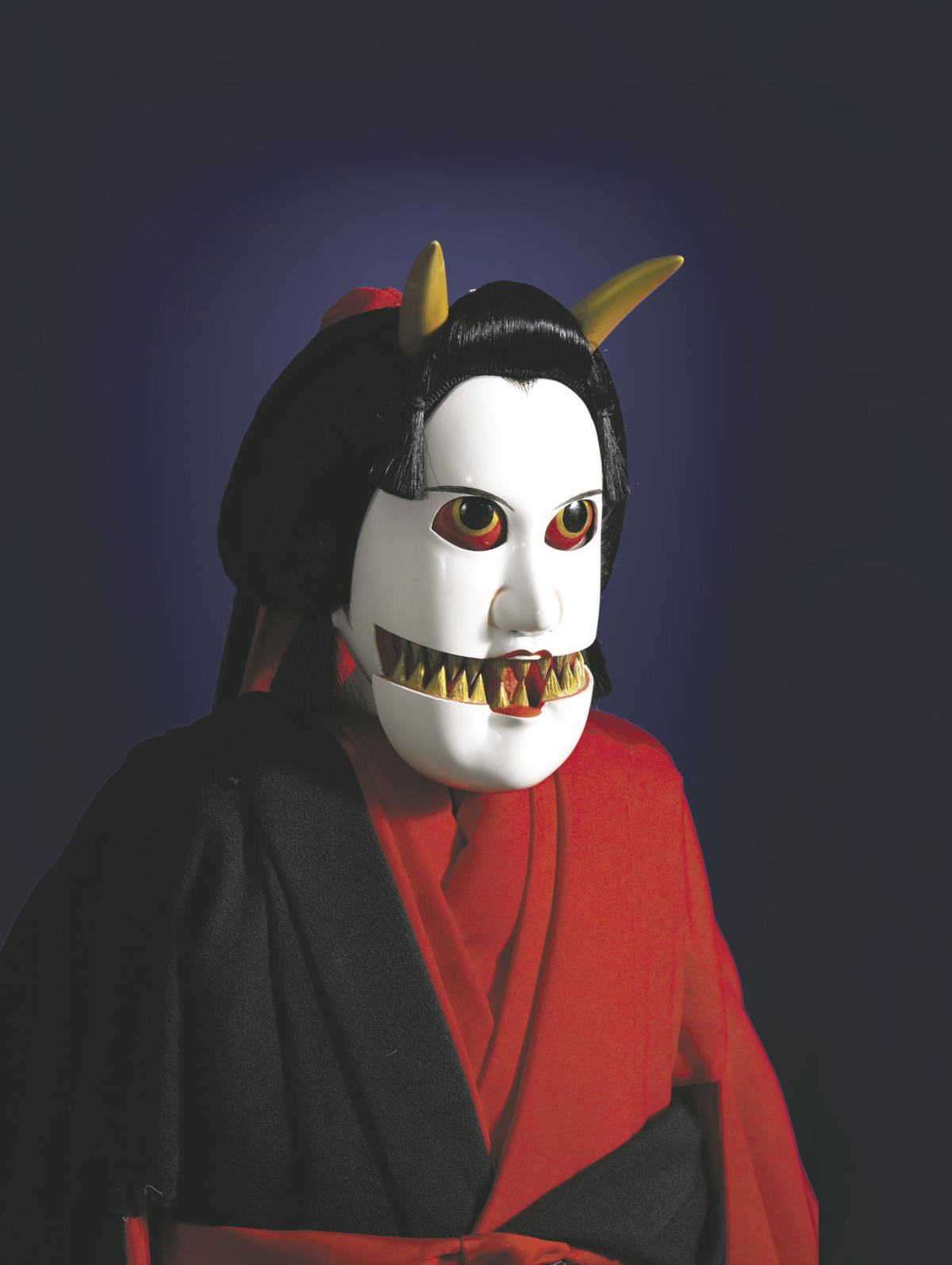 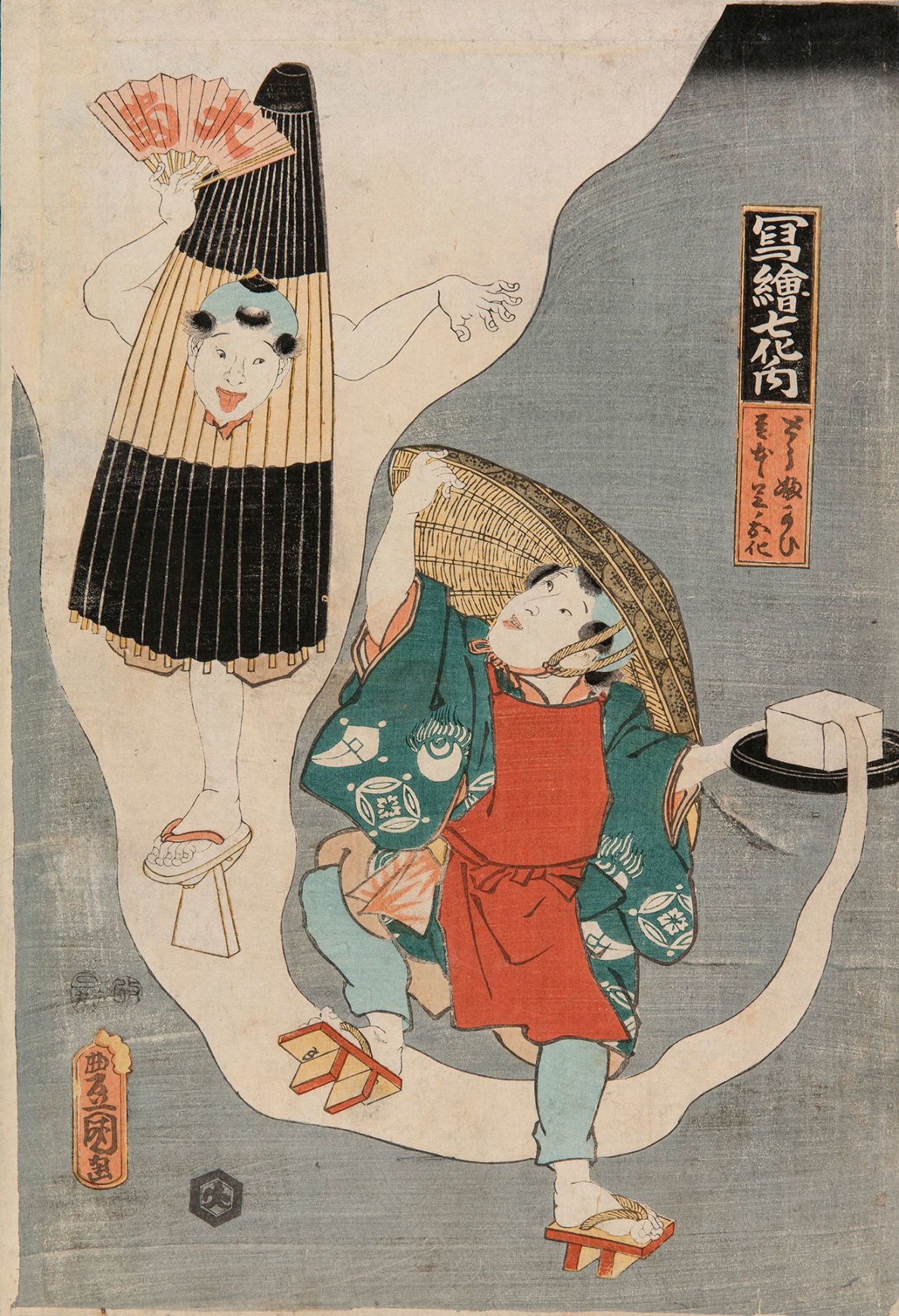 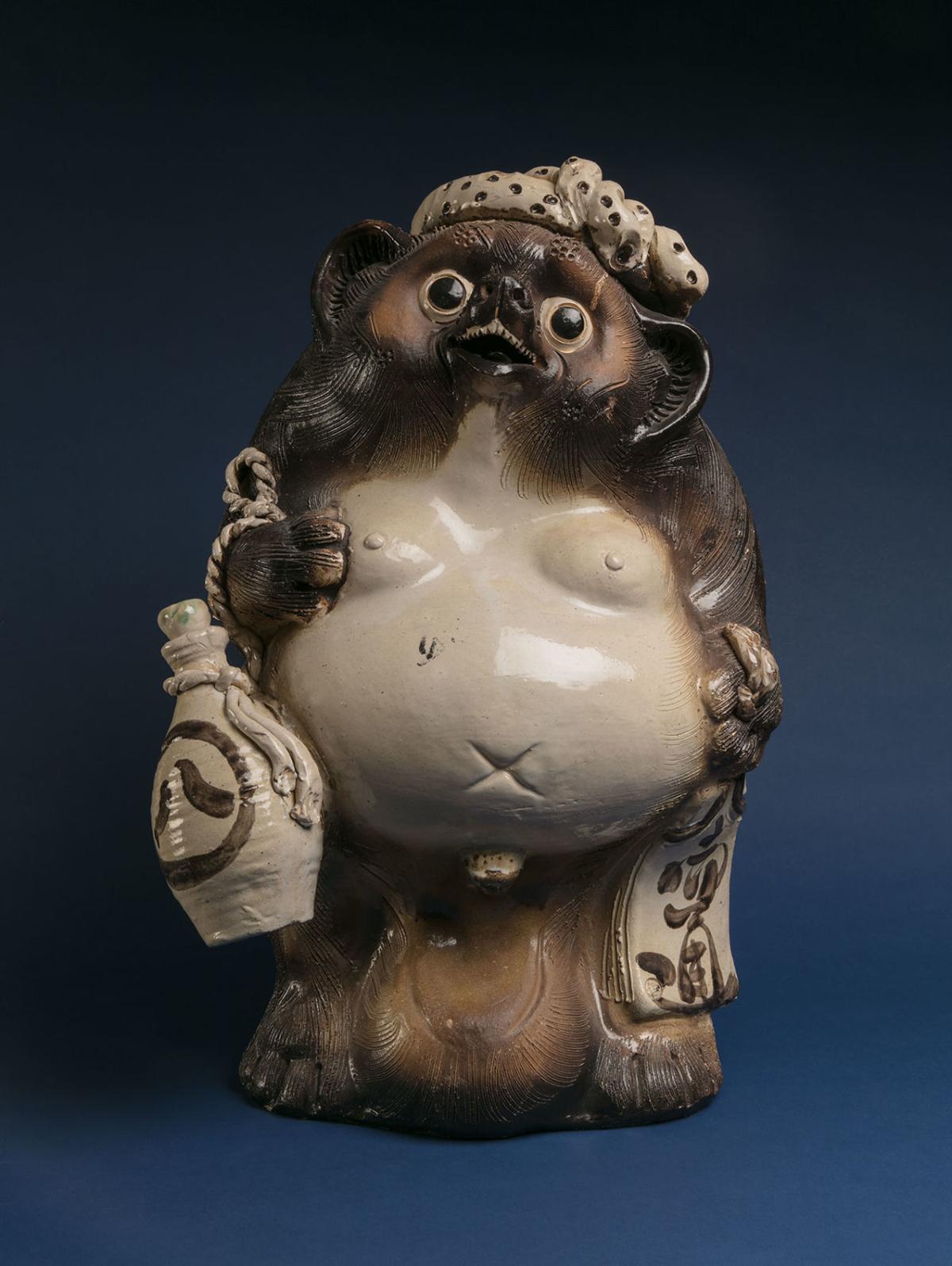 If you grew up in Japan in the 1960s and 1970s, you likely would have encountered the manga character Kitarō at some point. Manga, a type of Japanese comic that developed from an 18th- and 19th-century picture book tradition, helped rejuvenate interest in a centuries-old assortment of various Japanese ghosts and demons, or yōkai.

Although Kitarō, the creation of Japanese artist Shigeru Mizuki, is a yōkai child, he isn’t particularly scary. In fact, he’s adorable, and he was the hero of Mizuki’s manga series GeGeGe no Kitarō (Kitarō of the Graveyard). Dolls, games, and plush and plastic toys that feature the likeness of Kitarō and other characters from the manga series became an indelible part of Japanese culture, and they continue to be produced to this day.

What separates Kitarō from the rest of the ghosts and demons of Japan, many of which are represented in the Museum of International Folk Art’s exhibition Yōkai: Ghosts & Demons of Japan, is that he comes from Mizuki’s imagination and isn’t based on a traditional yōkai. But many of the characters that fans encounter in GeGeGe no Kitarō have antecedents in Japanese culture.

Yōkai: Ghosts & Demons of Japan (which opens Sunday, Dec. 8) is an introduction to a sweeping assortment of supernatural beings who, like the denizens of European fairy tale lore, range from the truly frightening to the merely mischievous, and can, like Kitarō, even be helpful. Approximately 150 objects are on view, ranging from the Edo period (1603-1867) and Meiji period (1868-1912) to the present day. The show explores how yōkai, rather than having a religious context, have resurfaced at different times throughout Japan’s history as an expression of popular culture and belief.

“Kitarō is one of the most famous yōkai manga characters in Japan,” says Felicia Katz-Harris, senior curator at the museum and its curator of Asian and Oceanic folk art. “Yōkai were really popular in the Edo and Meiji periods. But, during World War II, their popularity took a nosedive.”

Kitarō is the last of his kind, the only surviving member of a once-thriving ghost tribe. He is good-natured and dedicated to fighting the evil ghosts and demons who plague humankind. He’s often accompanied on his adventures by an eyeball, which is all that remains of his father’s decomposed corpse. “The eyeball follows Kitarō around, watching over him and giving him advice,” says Katz-Harris, who curated the exhibition.

Mizuki’s series reintroduced the abundant world of yōkai to postwar Japan. In addition to being a manga artist, Mizuki was a yōkai researcher and drew upon the work of Edo and Meiji period folklorists who were writing about yōkai and yōkai beliefs. “Artists would compile all these different yōkai that they would hear about in these encyclopedias,” Katz-Harris says. “They were taking abstract ideas or stories and assigning them a visual form. Mizuki was really into that. You can see how his drawings really reflect older artwork.” She includes Kitarō as an example of a modern form of yōkai to illustrate their persistence and how they still capture the imagination.

Mizuki was inspired by the tales told to him as a child by his nanny, Kageyama Fusa, who was known by her nickname Nonnonba. She entertained him with stories of ghosts and magic that held a lifelong fascination for him. “Nonnonba was old enough to remember all the stories from before Japan became an industrialized country,” folklorist Zack Davisson writes in his essay “Yōkai Evolution: Mizuki Shigeru and Yōkai Transformation from Folklore to Pop Culture,” which accompanies the exhibition’s catalog, Yōkai: Ghosts, Demons & Monsters of Japan. “She told him stories about monstrous ghost whales like the bakekujira or how the lights shining on distant mountains were fox spirits holding weddings.”

The exhibition and catalog include Mizuki’s illustration of the bakekujira from his 12-volume yōkai compendium Mujara. The image depicts the apparition of a skeleton whale that is said to haunt the sea and to bring misfortune to sailors who encounter it.

One particular type of fox spirit, which Mizuki likely first heard about from Nonnonba, is a shape-shifting trickster called kitsune. The exhibit includes an early Meiji period Ukiyo-e woodblock print by artist Yoshitoshi Taiso. The image, titled The Cry of the Fox, depicts a kitsune in mid-transformation, shifting from an assumed human form back into a fox, after having tricked a fox hunter into abandoning the chase. Two papier-mâché masks that date to around the 1950s and are part of the museum’s permanent collection also depict kitsune.

“Stories of kitsune include beautiful fox-women, fox-mothers, fox weddings, foxes disguised as priests, and foxes that possess people,” Katz-Harris writes in the catalog’s introductory comments. “The notion of kitsune as a yōkai resonates in other parts of the world where the fox is similarly imagined as a sly trickster with magical powers.”

Kitsune have a sort of counterpart in the tanuki, or raccoon dog, which is another type of mammalian yōkai. These figures are based on an actual species (also known as tanuki) that is indigenous to Asia. Said to be less dangerous than the kitsune, these legendary shape-shifters lure their victims with sake, inebriating them so it’s easier to pick their pockets. Images of tanuki are found all over Japan, often placed outside restaurants and bars to attract good fortune. The show includes a glazed ceramic figure of a tanuki (circa 1975), sake bottle hand, as well as a ceramic water dropper (used in making ink for calligraphy) in the form of a teakettle transforming into a tanuki (circa 1960). “In one story, a monk’s teakettle turns into a tanuki, which wreaks havoc before it is captured and subdued (and in some versions traded away),” writes Katz-Harris. In such tales, you can glean the way that storytellers used yōkai to comment on human foibles, such as excessive drunkenness. Drink enough sake, and you, too, might be seeing household objects spring to life.

Yōkai: Ghosts & Demons of Japan doesn’t follow a strict chronology. Katz-Harris pairs many historic objects with their more contemporary counterparts. The idea for the exhibition had its roots in a Namahage festival that takes place in the city of Oga, in Akita Prefecture. In 2012, the museum commissioned artist Ishikawa Taiko to make a costumed Namahage — a frightful being with blazing, angry eyes, long strands of hair, and a fanged, grimacing mouth. The work became part of the museum’s permanent collection, but there was no plan at the time to exhibit it. “Namahage is this deity/demon that goes around the village on New Year’s Eve and bursts into people’s private homes, calls out children by name, and threatens to take them away into the mountains or to eat them up, because of misbehavior,” Katz-Harris says. “People are expected to go up to the Namahage and offer him sake and food. Once he has these offerings, he mellows out a bit and leaves without the children, who promise good behavior in the next year. That’s a ritual that’s been happening for a long time.”

Katz-Harris was hoping for an opportunity that would give the museum a reason to display the Namahage figure. In February 2016, she curated Sacred Realm: Blessings and Good Fortune Across Asia, an exhibition that explored the myriad ways in which people across the continent connect with deities, nature spirits, and other unseen forces to benefit themselves and others. Thinking of Namahage, Katz-Harris included yōkai on a survey that sought visitor input on possible topics for future shows. “Far and away, that’s what people said they wanted to see.”

Why are people drawn to stories of ghosts, monsters, and demons? Why do images of horror continue to exert a psychological hold on humanity? First, they’re revealing: The frightful and the supernatural are a mirror image to earthbound, prosaic existence. Whether you believe in yōkai or are merely entertained by the stories about them, they can offer lessons in the way of allegory. Some of the more malevolent beings in the yōkai universe do just that.

Take, for instance, the yōkai known as Hannya, a female demon popular in traditional Noh (classic Japanese) theater. “She specifically transformed into a demon from a woman, due to jealousy and rage,” Katz-Harris says. “While she is ferocious, there’s an emotional side to her that, I feel, is relatable. It’s very human, these emotions of hurt and pain.”

Her story illustrates the corrupting influence of unchecked emotions. The mask, worn by actors in the dramas, has horns, fangs, and an unnerving grimace, like Namahage. But her eyes convey a sense of the suffering and pain she can’t let go of, even in the afterlife. “It’s amazing that a static mask can have so much emotion packed in it,” the curator says. The exhibit includes a Noh mask called White Hannya (2017), carved from cypress by contemporary Noh mask artist Terai Ichiyu.

In Noh theater, Hannya is depicted in a number of ways. There’s a red version, a black version, and a white version. The colors indicate the characters’ social standing and also the degree to which evil has possessed their souls. White Hannya is a member of the nobility. Her pale complexion marks her as less malevolent than her lower-class counterparts who wear the red and black masks. The Hannya mask features prominently in the 1964 Japanese horror film Onibaba, which is among a handful of Japanese films featuring yōkai that Katz-Harris hopes to screen during the run of the show.

Yōkai: Ghosts & Demons of Japan promises other surprises. A section at the back of the Bartlett Wing, where the exhibition is located, is reserved for an interactive experience atypical of the usual museum show: an obake yashiki, or Japanese-style ghost house. The museum partnered with yōkai scholar and artist Ko-no Junya of the Kyoto-based art collective Hyakuyo-bako to bring six yōkai to vivid life with sound effects, movement, and audio retellings of their stories. These yōkai are derived from the Hyakki yagyō (“Night parade of one hundred demons”), artistic depictions of which date back many centuries, including a famous scroll from the late Muromachi period (1336-1573). While this particular scroll is not on view, a later scroll with similar content, possibly from the Edo period, is on loan for the show.

Little is known about the story behind the night parade because historic scrolls didn’t include any text. But Junya, the art collective member, writes in his catalog essay “Yōkai: An Artist’s Perspective” that there is a legend that adds some weight to the phantasmagorical parade of demons, who march with banners and streamers trailing behind them in a devilish orgy of gleeful exuberance. “It is said that during the medieval era a horde of yōkai marched down the streets of Kyoto in the middle of the night,” he writes. The author was motivated to recreate them, forming, through his collective, an enduring new custom: an annual parade of masked revelers whose costumes are based on the specific demons depicted in the Hyakki yagyō. It’s like the 100 demons have leapt from the inky pages of Japanese history to colorful, nightmarish life.

But maybe they were always there. ◀