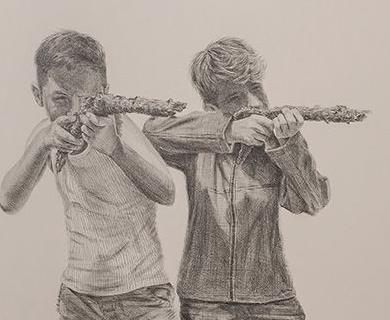 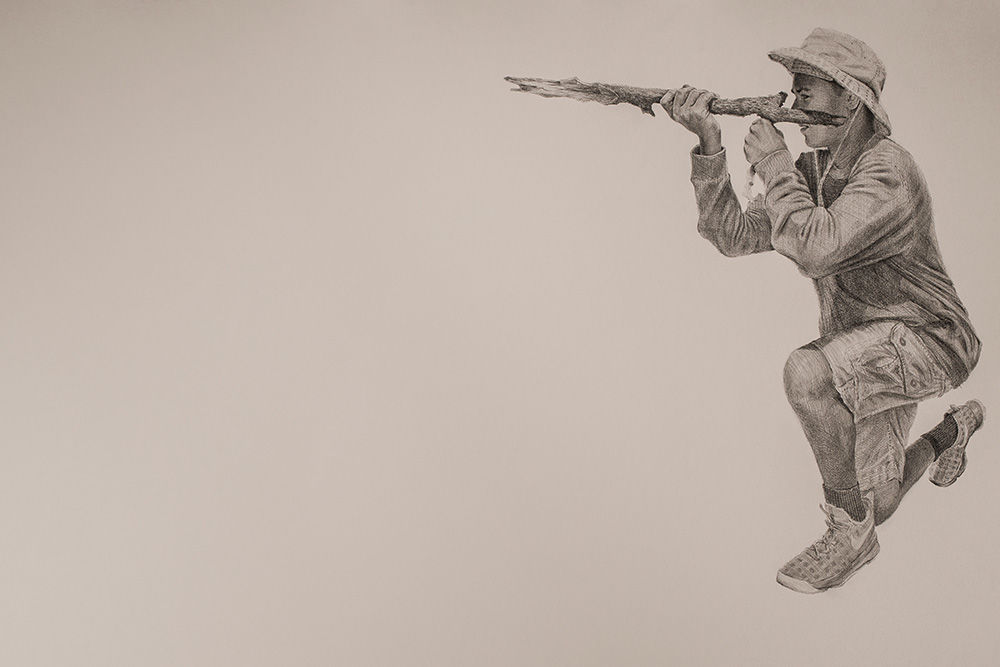 As a little boy in Acuña, Mexico, Fernando Andrade spent most of his time outside with his friends. They had a soccer ball to kick around, and games like hide-and-go-seek were easy to arrange, but actual toys were rare. They used their imaginations and refashioned found objects into playthings — a plastic bag became a kite; a conveniently shaped tree limb could be aimed like a gun. When he was seven, Andrade’s family moved to San Antonio, Texas, and within a few years, the streets of Acuña, a border town, were overrun by drug cartels and were no longer safe for playing.

Andrade started drawing in high school and found a photorealistic style that came naturally to him, as did the drive to practice his skills in his spare time. He taught himself to draw hair, hands, and other difficult parts of the human body by looking at photos in magazines. At San Antonio College, where he earned an associate’s degree in graphic design, he started thinking more deeply about the content of his drawings while taking twice the number of required drawing classes for his major. “The upper-level professors challenged me to think about drawing as more than an object or a still life. That’s when I started thinking about what I was drawing or painting and why,” he said.

He began showing his work in 2008, and in recent years has had solo exhibitions at Hausmann Millworks, Blue Star Contemporary Art Museum, and Guadalupe Contemporary Arts Center in San Antonio, but he has rarely shown outside of Texas. On Friday, Sept. 8, Andrade’s first Santa Fe exhibition opens at Peters Projects — La Patria (Homeland), a series of 10 photorealistic drawings of children engaged in symbolic representations of gun violence.

La Patria shows in connection with two thematically related ceramics exhibitions, Gustavo Pérez’s Lines and Jamie Porter Lara’s In Situ, both of which deal with borders, said Mark Del Vecchio, director of Peters Projects and an expert in American ceramics, who curated all three shows. Del Vecchio met Andrade several months ago when Andrade and an artist friend road-tripped to Marfa, Texas, and to Santa Fe, dropping off their business cards at galleries with the goal of attracting attention to their websites. “Twice in 30 years have I given a show to someone who walked into the gallery,” Del Vecchio said. “Visiting galleries in person to get them to show your work — I would say that’s a terrible strategy because even if I like what I see, there isn’t usually much I can do in the moment. It just happened to work out that I had a space and remembered Fernando and realized how well his work would fit. I also really liked his friend’s sculptures.”

La Patria is an extension of Andrade’s earlier work, which often features children at play. At first glance, his images seem to be wholesome depictions of small moments that would charm Norman Rockwell. A boy gives a girl flowers; two kids prepare to hit a piñata. Andrade’s subjects float on empty backgrounds that are at once stark and serene. Questions arise. Where do these children live? Why do they look so tired? Are the ubiquitous sticks they hold pretend weapons — or just weapons? If the sticks are guns, what are the flowers? Andrade consciously conflates the innocence generally associated with childhood with the violence of border towns that strips children of the freedom to run around and play, whether because they can be caught in the crossfire of drug cartels or because they get involved in criminal activities themselves. Part of Andrade’s inspiration for his drawings comes from the disappearance of a friend in 2012 — presumably a casualty of such violence.

“I met him in San Antonio when I was in high school. He grew up in Mexico around all the violence that was going on, and from what I heard he had gotten involved in weapons. You kind of become involved because your cousins and your uncles are involved. He was in the U.S. for a few years, and then he moved back to Mexico,” Andrade said. “The last conversation we had was on Facebook in the fall. We both have birthdays in January, and we thought we might get together. But when I went back to his Facebook page in January, I saw all these posts with people asking where he’s been, and it seemed he’d been gone for months. A year went by and people were still posting messages about how they missed him.”

In other earlier series, Andrade juxtaposed his subjects with subtly rendered phrases in Spanish that directly referenced cartel violence. In La Patria, which he created for the Peters Projects exhibition, he attempted a more universal approach, broadening the sense of place to whatever viewers might project from their own experience. The boys here edge against adolescence, dressed in casual camouflage, taking aim or staring down the viewer with a level of defiance that does not rise to aggression or even insolence. They could be angry, sad, or have simply had a long, hot day of playing in the sun. “I wanted to capture the sense of pride on the battlefield, that pose. But at the same time, I thought some of them looked a little scared or worried. There’s one in a sniper position. It’s an action pose, but it’s also the silence before the bullet that I’m trying to capture,” Andrade said.

The drawing titles come from the military alphabet, among them Charlie, Echo, and Zulu, and serve as the boys’ names. The kids featured are Andrade’s little brother and his friends, who donned costumes and slipped into character under his direction for a photo shoot that became the basis for the series. “I got all the camo clothes at Goodwill. I was surprised to find so much of it in the kids’ section. I feel like kids are being targeted to have military pride from a young age,” Andrade said. “Ever since he was six, I would always ask my brother what he wanted to be when he grew up, and he always said he wanted to be an architect. A couple of years ago, he started saying maybe he wanted to join the Army. Where was he getting this from? You see it on television, in commercials, and there are a lot of video games that deal with soldiers. Kids play games about what they are exposed to. In Mexico, defending your territory is part of pride. That’s what the title is about, Homeland: it’s about defending what is yours — your territory or your land.”

Andrade has also ventured into colorful abstract painting that is aesthetically removed from the gray-scale intensity of his drawings, as well as three-dimensional castings of the same wooden branches he renders as guns. Covered in graphite, the sculptures take on the grimy sheen of pistols, rifles, and semi-automatic weapons. Knowing what might be in store for his birthplace of Acuña and other border towns, he has been considering how to deal with the concept of a wall in future drawing series. “Not only a physical wall, but a metaphor for things we go through,” he said. “How we have our own walls in relationships and marriage — and the personal blocks that keep us from moving forward.”