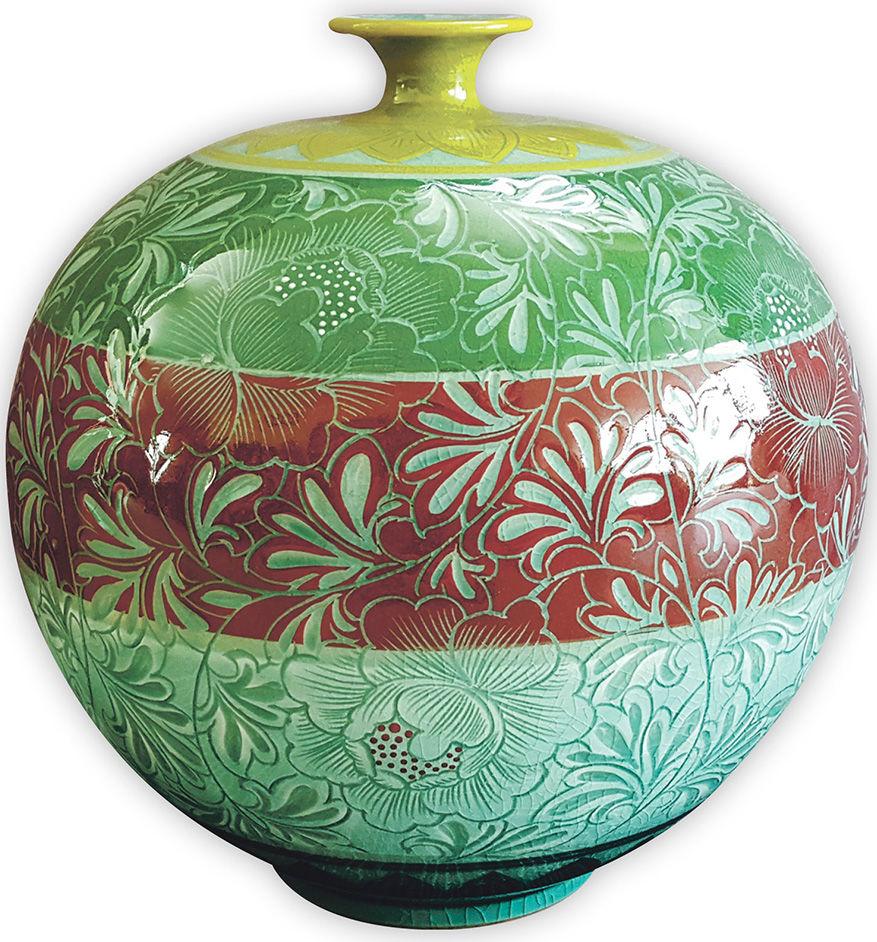 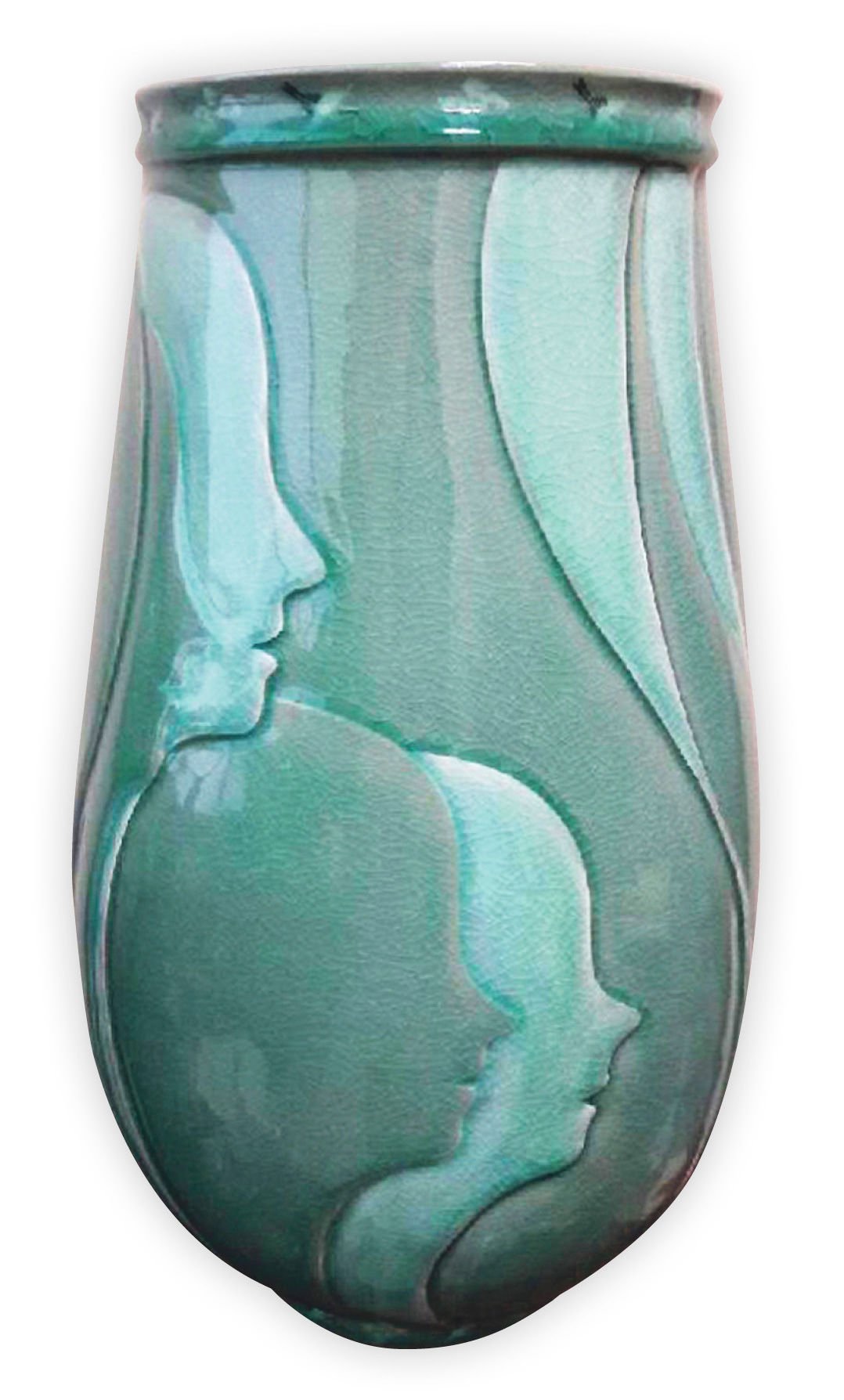 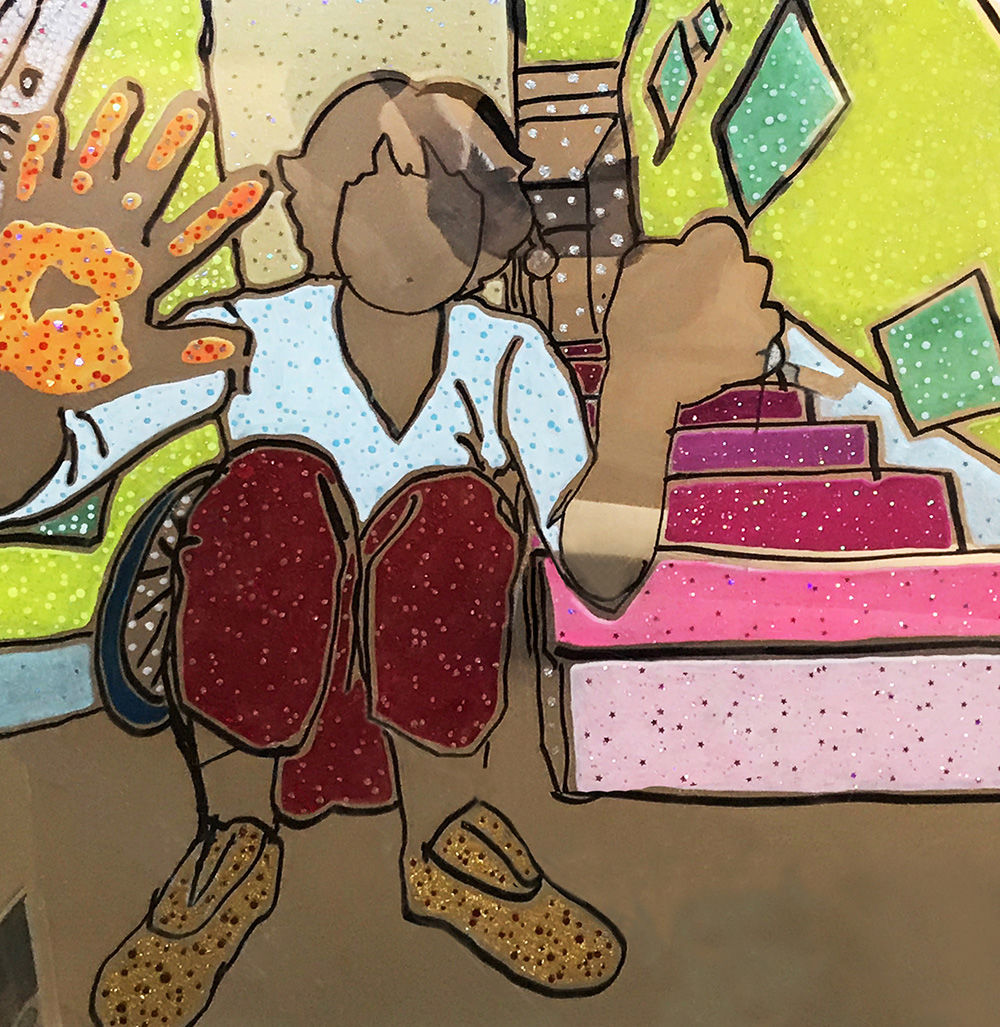 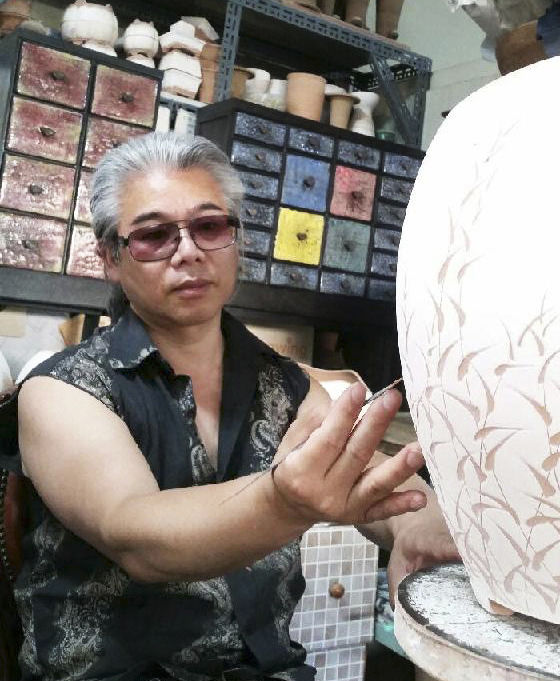 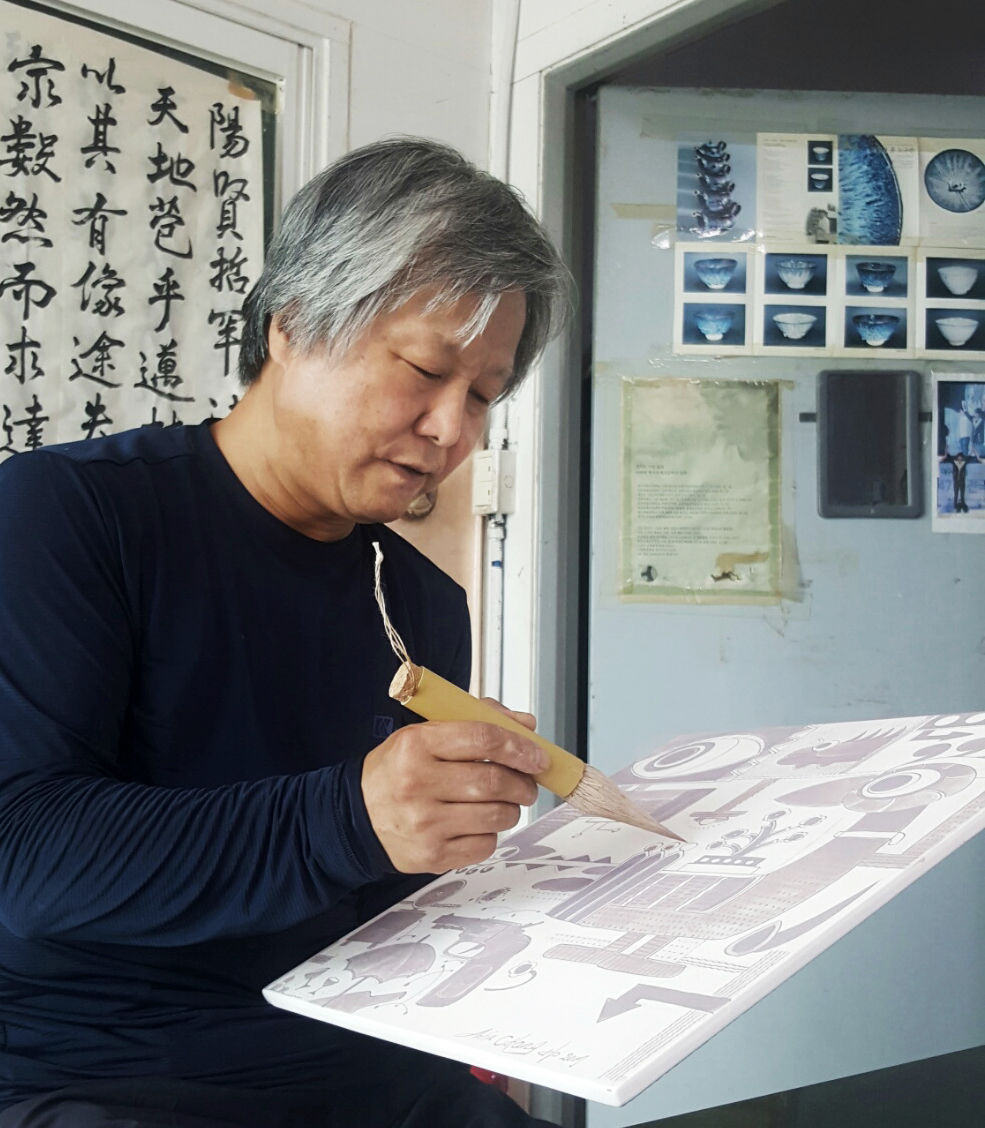 The city of Icheon, located in Gyeonggi, South Korea’s most populous province, has been a center of ceramic production for hundreds of years. The city itself offers a microcosmic snapshot of the history of Korean ceramics dating to the Bronze Age. The region, referred to as “the heart of ceramic art,” is known for the celadon (greenware) pottery produced during the Goryeo dynasty (918-1392), white porcelain called baekja that was popular in the Joseon era (1392-1910), and buncheong, a type of bluish-green celadon that was also developed in the Joseon period. The Joseon era came to an end in 1910, when Korea fell under Japanese rule and celadon pottery production all but stopped until it was revived in the mid-1950s. Today, the city’s Ceramics Village, a popular attraction for tourists, has about 80 ceramic studios (there are more than 300 citywide) where artisans still work using traditional methods of the region, making decorative and utilitarian celadon wares. Every spring, Icheon hosts Korea’s largest annual ceramics festival, which just celebrated its 31st year.

Icheon has been one of Santa Fe’s 10 sister cities since 2013, a fitting pairing, since both locations are also UNESCO Creative Cities, a designation given to municipalities throughout the world that are hotbeds of artistic production. Before being named sister cities, Santa Fe and Icheon had already established a rapport when former mayor David Coss and Icheon’s mayor Byungdon Cho signed an economic agreement in 2012, in hopes of fostering ongoing cultural exchanges. Today, that relationship remains strong.

A delegation of ceramic artists from Icheon’s Ceramics Village, in town for the annual Art Santa Fe international art fair, are doing a series of demonstrations as part of Art Labs, curated demonstrative programs made in conjunction with local galleries and institutions. The Korean ceramists are hosted by G.K Fine Art Gallery, the local gallery of Korean-born artist Gary Kim and his partner Helena Kim. G.K Fine Art has two booths at the fair to showcase Icheon ceramics as well as the works of several contemporary Korean artists being represented by the gallery. The ceramic artists — Boksik Ji, Joungoo Ham, Changwan Hong, and Changho Ahn — present their demonstrations at various times on Friday, July 14, and throughout the weekend. “Most of them have never been to an American art fair, so they’re very excited,” Kim said.

Modern celadon can range in color from bluish-gray to a deep jade green. Contemporary forms, which include pots, jars, tea sets, vases, and other objects for the home, often maintain the monochrome glaze seen in historic pieces, but the surfaces can be left plain, ornately carved, or painted with intricate nature-inspired imagery. The ceramics are wood-fired in large, multi-chambered kilns where oxygen is reduced to achieve the desired hues. The process also results in a network of fine cracks over the surface, visible under the glaze, called crazing. The ceramic demonstrations focus on new techniques and innovations as well as on historic methods of producing Korean pottery.

G.K Fine Art’s second booth features the contemporary arts of Kim and six established Korean art makers: visual artists Jin-woo Park, Eun-young Song, and Yun-hee Cho; folk artist Hae-sook Lee; mixed media artist Yeo-joo Nam; and figurative painter Young-sun Kim. “Some of them are using mixed media and some of them are using more traditional acrylics and oil paints like me,” said Kim, a plein-air landscape artist and figure painter. “I would say I’m a contemporary representational artist,” he said. Kim’s body of work includes portraits, figurative paintings and drawings, and a series called Art in Art, in which he depicts museumgoers at well-known venues such as New York’s Metropolitan Museum of Art. “Since I’ve moved to Santa Fe, I’ve just been focused on landscapes, especially aspen trees — aspen groves, aspen foliage — and some local scenes,” he said.

Kim moved to the U.S. 18 years ago, living first in New York. After traveling the country, he settled in Santa Fe in 2011. The gallery closed temporarily in 2016 while the Kims traveled to South Korea to find a stable of two- and three-dimensional artists to represent. They are now poised to reopen their gallery on the corner of Alameda Street and Old Santa Fe Trail. “The Korean art market is very big,” Kim said. “There are a lot of artists leading the art world. There are a lot of young, good artists. They’re the jewel inside the box. I’d like to make my gallery like a stepping stone for them to break into the American art market.” The gallery invited about 20 artists to show in Santa Fe. “It’s just the tip of the iceberg. I’d like to introduce Korean artists to American collectors who appreciate and care about Asian art and artists — not just traditional art. A lot of the artists we’ve invited here are high-end artists that American collectors have never seen before.”

Art Santa Fe, the annual contemporary art fair, has its fair share of loyalists who have stuck with it through venue changes and the shifting sands of private and corporate ownership. The international gathering of dealers, now in its 17th year, has a history going back even further, to 1995 (it wasn’t always an annual show). The first Art Santa Fe came only a year after the premiere of New York’s Gramercy International Contemporary Art Fair (later renamed The Armory Show) at the Gramercy Park Hotel in 1994. Hotel fairs became a thing, and Art Santa Fe, then under the auspices of the Gramercy Fair’s founders — dealers Colin de Land, Pat Hearn, Matthew Marks, and Paul Morris — found its humble beginnings at La Posada de Santa Fe. When local gallery owner Charlotte Jackson took over in 1999, the fair was held at The Hotel Santa Fe, but subsequent shows have been at the  Santa Fe Convention Center, where it has remained except for a brief period when the convention center was being remodeled. The fair was purchased from Jackson in 2016 by Redwood Media Group, owner of several art fairs around the country. This year the event runs Friday, July 14, through Sunday, July 16, at the convention center (201 W. Marcy St.).

Gallery Edel (Booth 105), a contemporary art and design gallery based in Osaka, Japan, is among the longtime exhibitors returning in 2017. The gallery has been a steady presence at Art Santa Fe since the early 2000s. This year’s fair also brings dealers from South Africa, Italy, Taiwan, and Spain as well as a host of national dealers. Albuquerque’s Park Fine Art  (Booth 407) returns, as do local art venues Sugarman Peterson Gallery (Booth 505), Pippin Contemporary (Booth 411), the  New Mexico Museum of Art (Booth 713), Ellsworth Gallery (Booth 510), and others. Art Santa Fe also features art talks, spotlight artists, and curated installations done in partnership with local galleries called Art Labs. Among this year’s Art Labs are the installation Translation by artist Zammy Migdal,  a body of work inspired by ideograms and the idea of a universal language; Lines of Thought, a sampling of the exhibit of drawings from the British Museum that is now on view at the New Mexico Museum of Art; and a show of winners and finalists from the Redwood Media-sponsored Platform Artist of the Year contest, including this year’s winner, painter Kevin Grass. In other Art Labs, children’s author Kelly Fischer does readings from her book Capu Capuchin Goes to the Monkey College!, and G.K Fine Art Gallery hosts demonstrations by ceramic artists from Icheon, one of South Korea’s leading  ceramic centers.