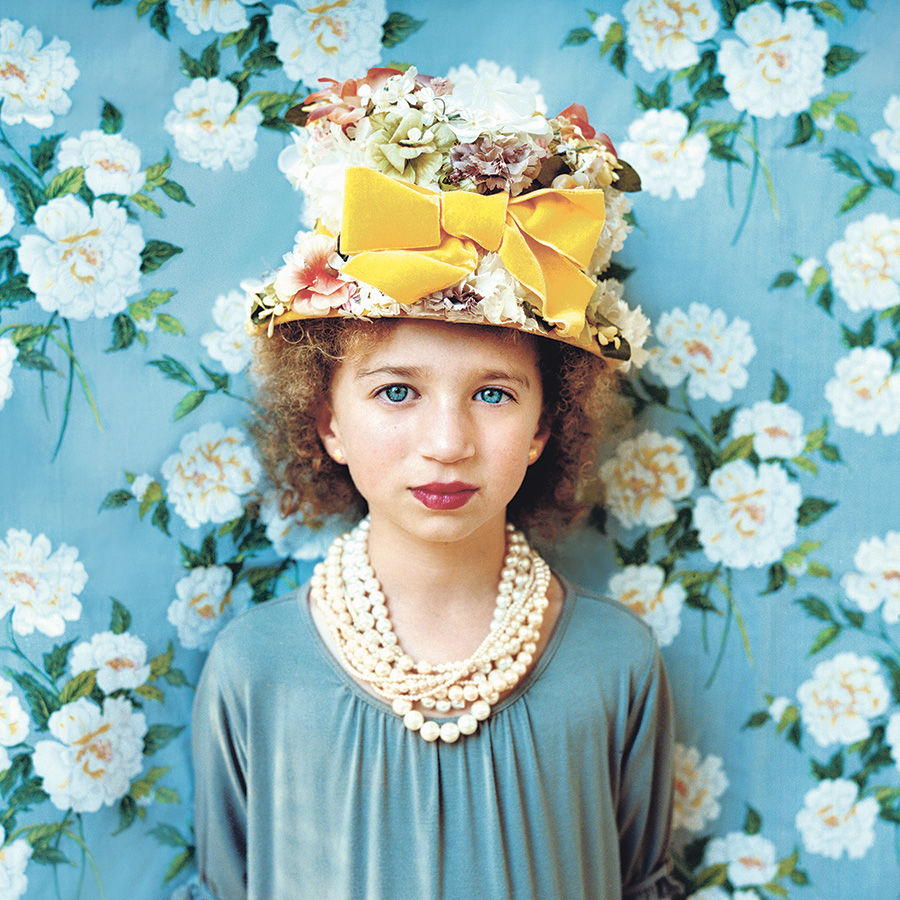 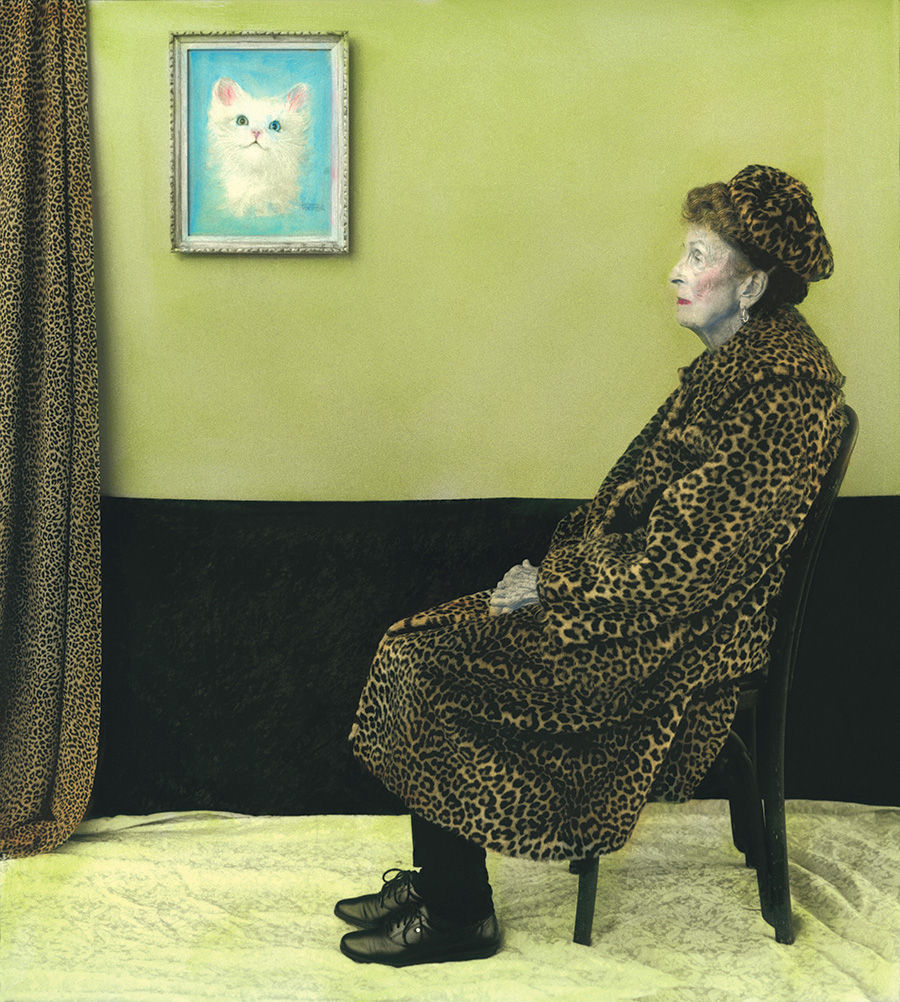 Aline Smithson: Arrangement in Green and Black, #1, from the Portrait of the Photographer's Mother series, 2005, hand-painted gelatin silver print 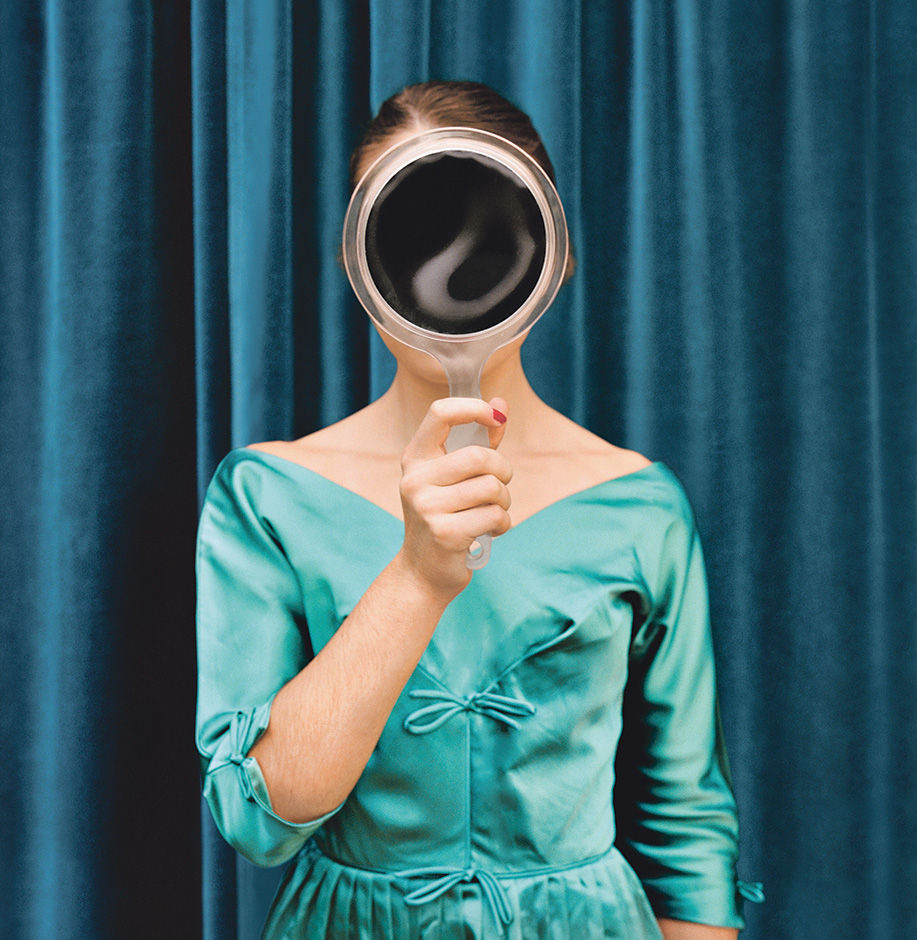 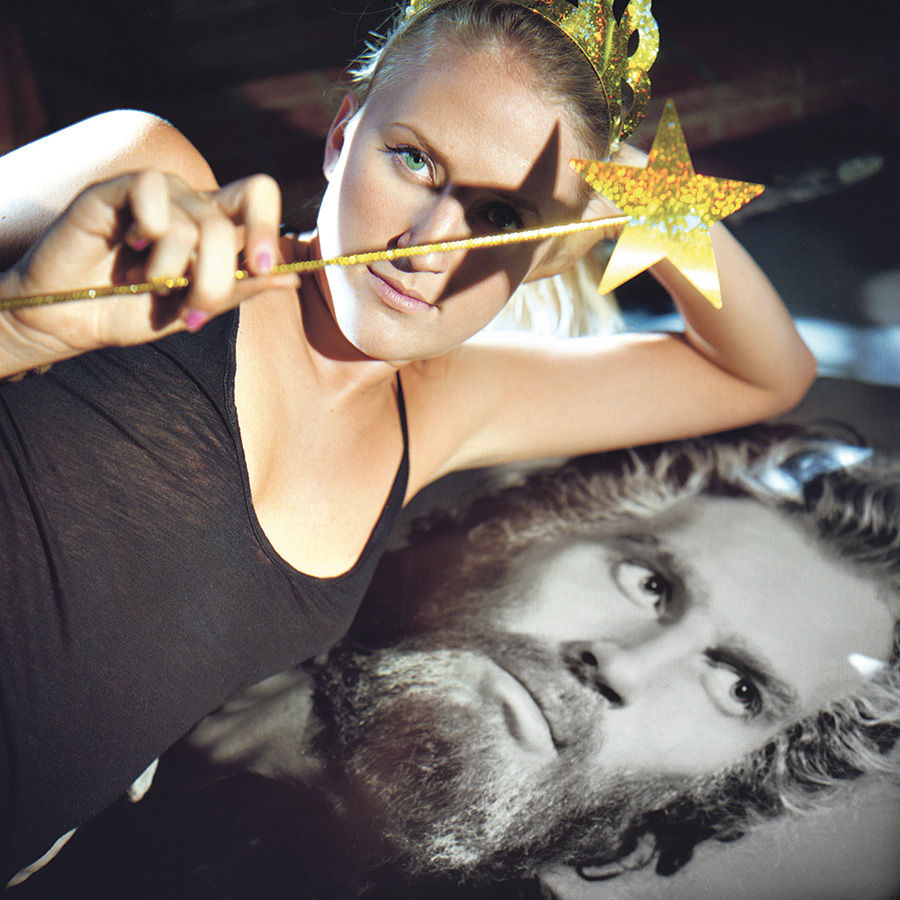 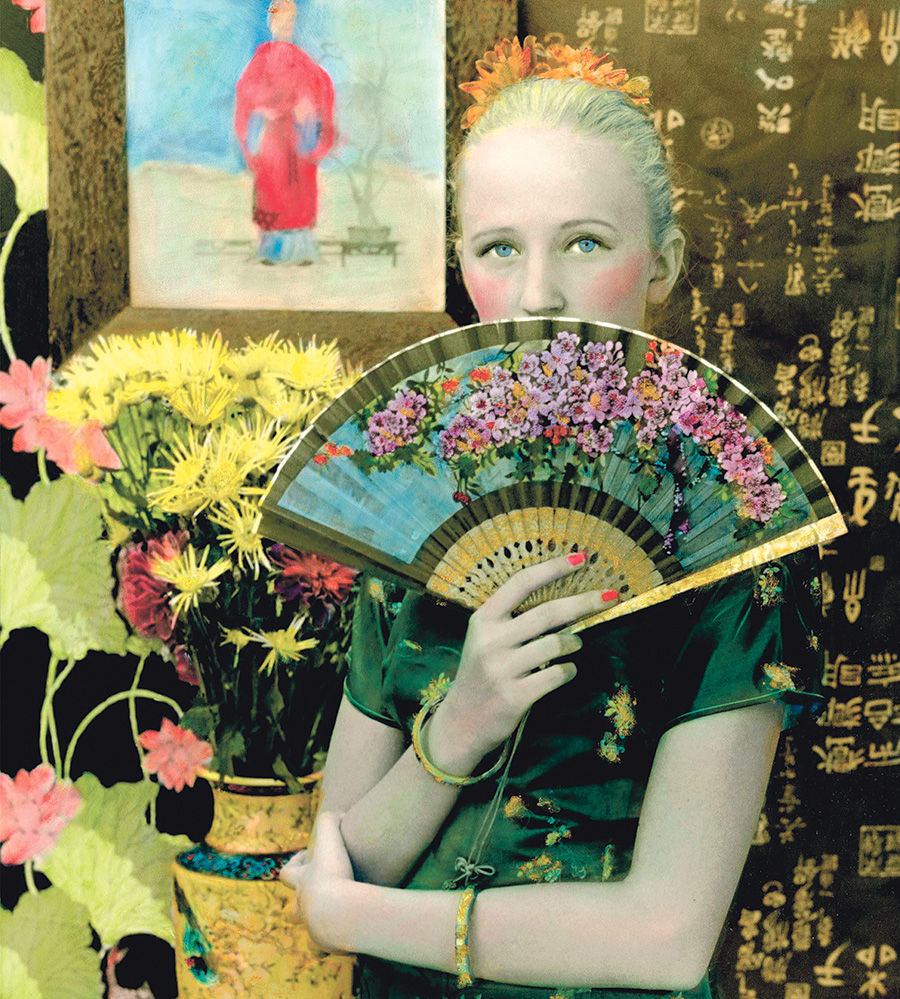 Aline Smithson: Arrangement in Green and Black, #1, from the Portrait of the Photographer's Mother series, 2005, hand-painted gelatin silver print

With the widespread availability of digital cameras in the 1990s, photographer Aline Smithson, then a black-and-white photographer, reassessed her darkroom practice. Darkroom photography on the whole was in decline and the community darkroom Smithson made use of in Los Angeles closed with only a week’s notice. She began exploring color photography, drawn to the saturated Technicolor palette of Kodachrome film. Works from several series of Smithson’s color images are on exhibit in Self & Others at Verve Gallery of Photography. These include selections from Hollywood at Home, an homage to the staged glamour shots of film stars from the golden age of movies. Although Smithson’s photos are reminiscent of celebrity shots you’ve seen before, calling to mind specific Hollywood stars, such as James Dean and Shirley Temple, they are original compositions. “I didn’t base them on specific photographs, but I was trying to capture that look and feel of Kodachrome stills from that era,” she told Pasatiempo.” The Hollywood at Home portraits, glimpses into the identity-shaping years of youth and young adulthood, lend a prestige to her subjects: ordinary people in domestic settings given the larger-than-life presence of movie stars. “That was the intention,” she said.

Self & Others is on view at the gallery along with Maggie Taylor’s Well Then and new works by Micky Hoogendijk. A monograph of Smithson’s work, Self & Others: Portrait as Autobiography, is published by Magenta Foundation.

All of the images in the book and the exhibit were shot on film, many of them made using a 50-year-old twin lens Rolleiflex camera. “I liked the medium-format lens and that square format that allows me to frame a photograph like a painting,” said Smithson, who came to photography after studying to be a painter at the University of California, Santa Barbara. Smithson stages her photographs with backdrops, props, and vintage clothing, using skills learned as a fashion editor for Vogue publications, a career she pursued before turning to photography. Her practice allows her to combine interests in cinema, fashion, and even painting, incorporating references to masterworks from art history and creating hand-colored prints reminiscent of 19th-century hand-tinted daguerreotypes and the narrative albumen prints of Japanese photographer Kusakabe Kimbei (1841-1934). These she shot in black and white, laboriously hand-coloring the prints for a series called Recreating History, capturing a sense of the fin de siècle craze for Orientalism in images such as Charlotte With a Fan and Sisters, the latter depicting two young neighbors dressed in kimonos, standing before a backdrop of printed fabrics and framed Japanese prints.

Arrangement in Green and Black: Portrait of the Photographer’s Mother, a direct nod to James McNeill Whistler’s Arrangement in Grey and Black No. 1, more commonly known as Whistler’s Mother, comprises 20 images shot in black and white and then hand-painted. Smithson made them using her (very patient) mother as subject. Each photograph in the series is based on Whistler’s original, mimicking the matron’s seated pose, but Smithson’s photographs depict the figure in different dress. In one, she’s adorned as a witch wearing a pointy hat. In another, she poses as a convict in striped prison garb, a ball and chain affixed to her leg. Smithson also dressed her mother in safari clothing, in a wedding dress, under clown makeup, in a grass skirt, as Elvis, and in a straitjacket. The one element that never changes is her mother’s shoes — a visual running joke. It’s a playful, humorous series, and it was among the last activities mother and daughter engaged in together before her mother’s death. “We had a lot of fun making them,” Smithson said, “but my mother never got to see the hand-painted images. I think she saw some of the black-and-white ones, but she died before the series was complete.”

Spring Fever, a vibrant, smile-inducing series of portraits of seven-year-old girls, is a celebration of life and beauty. The young girls seem fully at ease in front of the camera, their eyes and faces calm and expressive. Smithson dressed each girl in antique floral hats and jewelry and shot them against backdrops of floral-patterned fabrics. “There’s something about the age of seven. It’s a transitional time for girls, who are just beginning to develop an identity separate from their parents and to be influenced by the world.” The portraits are of the children of friends. “A few brought over eight-year-old girls, but in the course of one year, there’s a world of difference. Something is lost. You know the Seven Up! films? I’d like to do another series and photograph them again at fourteen.” In Michael Apted’s Up series, the director revisited a number of British children every seven years, charting their lives over the course of five decades.

There’s a deceptive simplicity to many of Smithson’s compositions. Revisiting Beauty, a recent body of work, combines landscape imagery and portraiture in rich, saturated tones. The washed-out details of the landscape backdrops, colored in nearly monochromatic hues, are reminiscent of traditional Chinese landscape painting. “I shoot the landscapes myself, so it’s my own original photography,” Smithson said. Using the landscapes as backdrops makes each image in Revisiting Beauty a photograph within a photograph, an idea also explored, more explicitly, in Portraits of Portraits, glamour shots of movie stars arranged as part of still-life compositions. But it’s Smithson’s fascination with the Technicolor age that’s reflected in her vision. Many of her subjects are friends, neighbors, and family members. It’s a world she knows, and Self & Others, as its title suggests, is also a glimpse into her life. The monograph closes with a final image: a grid of nine self-portraits, point-of-view shots of the photographer’s feet in various settings — crossed in front of a television, standing in running water, at the edge of a garden, and clothed in white slippers emblazoned with the words “Bates Motel.”

▼  Aline Smithson: Self & Others

I'm loving to vibrant colors. I'm going to post this article on my blog.
https://www.facebook.com/BAGallery85/