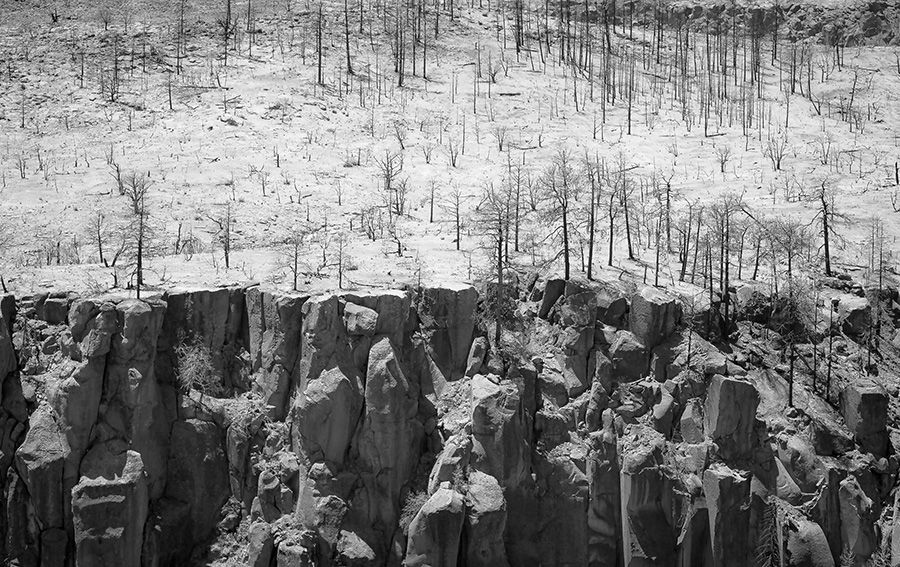 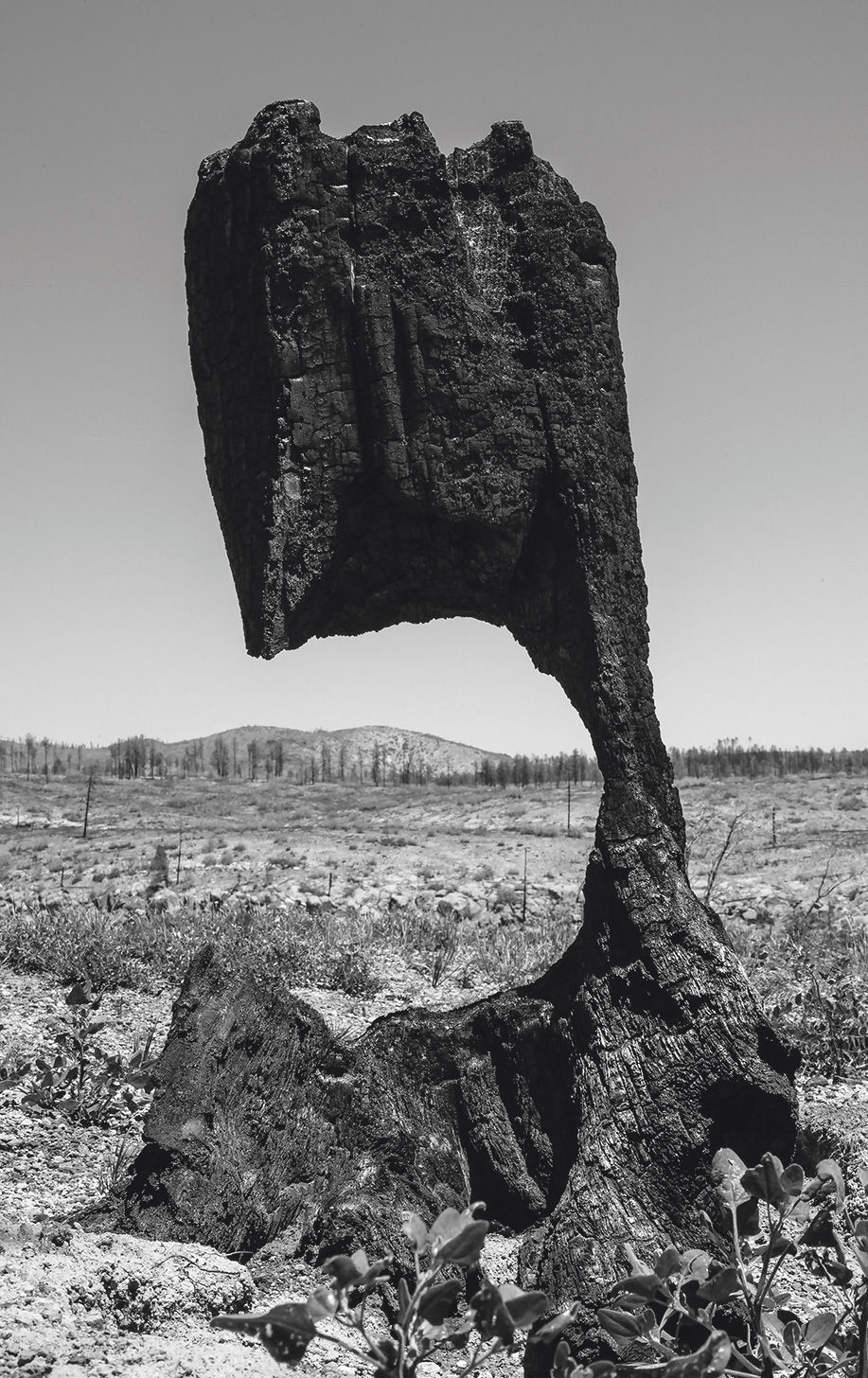 "By the end of the century, the woodlands of the Southwest will likely be reduced to weeds and shrubs. And scientists worry that the rest of the planet may see similar effects.” So begins Jeff Tietz’s Rolling Stone article “The Fate of Trees: How Climate Change May Alter Forests Worldwide,” published in March. Tietz cites the research of Park Williams, a postdoctoral student at Los Alamos National Laboratory. The end of the new century may seem a long way off, but according to Williams, as early as 2050, a combination of drought and excessive heat due to climate change could spell disaster for Southwest conifers, resulting in a massive die-off.

“There have always been fires, but things are getting more serious,” Bulgaria-born photographer Rumi Vesselinova told Pasatiempo. Vesselinova’s  exhibit Sketches in Charcoal & Fire documents 2011’s Las Conchas fire and its lingering effects. The show, which opens at Catenary Art Gallery on Friday, July 24,  looks at the altered landscaped ravaged by the fire, with images shot over the course of four years. “The balance is definitely off,” said Vesselinova, who runs Catenary. “Grasses will survive better, I think. But trees — Williams’ conclusions are not optimistic at all,” she said, referring to Tietz’s article.

Vesselinova’s images capture the devastation of the fire that threatened the township of Los Alamos, as well as the national lab, burning more than 150,000 acres to become, at the time, the largest wildfire in state history. As a photographer, her interest was in the aesthetic beauty of its effects. The fire, which began in late June and was not fully contained until the first week of August, sent smoke billowing into the sky and sent ash drifting over Santa Fe. While the fire raged, the colossal plumes of smoke shrouded the sun, affecting the quality of light and filling the sky with an otherworldly combination of hues. For onlookers, it was a spectacle. “The look of the sun, the moon, and the sky was so different,” Vesselinova said. “It’s scary because you know this is coming from a dangerous thing, a blazing inferno, but at the same time, visually, it’s so compelling. It’s like nothing I’ve seen before.”

Vesselinova did not intend on making a body of work on the Las Conchas fire when she began, but she came back to the subject time after time, and the results are two separate but related series: one in color (Sketches in Fire), dealing with a two-week period shot while the fire still raged, and the other (Sketches in Charcoal), shot predominately in black and white save for a few images bearing traces of desaturated color. “In terms of getting the pictures, I was never really close to the fire,” she said. “My record is of things as you could see them from Santa Fe.”

The vertical trees in the black-and-white photographs are bereft of branches and darkened by the fire. They intersect with the long shadows cast by the trees; the effect resembles the crosshatching technique artists sometimes use in drawing. “The shadows of the trees I thought were visually so strikingly different from my other landscapes. I’ve done these large-scale Southwest landscapes for years now. This had a completely different quality. Some were taken in the winter. The snow makes the contrasts even more dramatic, I would say.”

The photographs also document the slow rejuvenation of the forest. A year after the fire, patches of new growth appeared, as can be seen in the print Burnt Forest 3, but the bright green vegetation is nearly swallowed by the surrounding terrain of blackened, skeletal trees. “It was less than a year, actually. These were taken in May 2012. You will see some new growth, especially on the ground. It starts from the ground up, but the trees will never recover. There are flowers sometimes and then, of course, some shrubbery and bushes, but the burned trees are dead.”

Images that capture the sky and distant mountains, shot while the fire still burned, reveal a spectrum of color only possible because of the smoke in the atmosphere. In the photograph Smoke and Kite, a kite drifts high in the sky, silhouetted by the glow of a pink sun, with no indication that the stunning sunset is the result of a natural disaster happening nearby. Another skyscape, Las Conchas Fire Sunrise, shows dawn breaking through a canopy of smoke above the mountains, illuminating an apocalyptic scene. “From a photographic point of view, danger is quite spectacular. We all know that the reason for these beautiful sunsets is pollution, fire, or other reasons that are not so pretty, but the visual effect is amazing.”

At 7 p.m. on Tuesday, July 28, Vesselinova discusses her work at the Los Alamos Nature Center (2600 Canyon Road, Los Alamos, 505-662-0460), followed by a talk by ecologist Terry Foxx on conditions that lead to fire devastation and recovery from the Las Conchas Fire. The event, “Art, Wind, and Fire,” is free to the public.

In the exhibit Fire Season, part of the museum’s yearlong  Focus on Photography, which began in 2014, a handful of  American photographers — Jane Fulton Alt, Patricia Galagan, Greg Mac Gregor, Philip Metcalf, and Larry Schwarm — capture  the dramatic changes wildfires and controlled burns bring  to the environment. Some focus on fire’s more destructive capacities, while others look to its role in the regeneration of forests, but each presents selections that record the dange- rous beauty of this most alluring of elements.

Fulton Alt’s imagery of controlled burns on the prairie — haunting smoke-filled landscapes — take on aspects of minimalist, abstract compositions. Galagan’s photographs document new growth in areas ravaged by wildfires; a carpet of green undergrowth surrounds the charred remnants of what was once a forested landscape, and bone-like trunks of aspens appear from beneath peeling skins of singed bark. In a photo by Mac Gregor, the dramatic plume from a fire in the Pecos  wilderness soars high above the Sangre de Cristos, the Rail Runner resting at a station in the foreground. The image is a reminder of the proximity of civilization to the might of nature’s wrath. Metcalf’s Fire Ghosts series captures a sense of the extent of fire devastation in stark black-and-white photographs: the scorched trunks of trees fill the melancholy landscape in a pattern of vertical lines, appearing as though drawn or etched by hand. Schwarm’s dramatic shots of a land aflame capture the awe-inspiring, other-worldly beauty and power of fire.

Running concurrently with Fire Season are two other  Focus on Photography exhibits: To Feel Less Alone: Gay Block,  a Portrait and Photo Lab, a revolving show that explores the techniques and tools of historic and alternative forms of photography. — M.A.