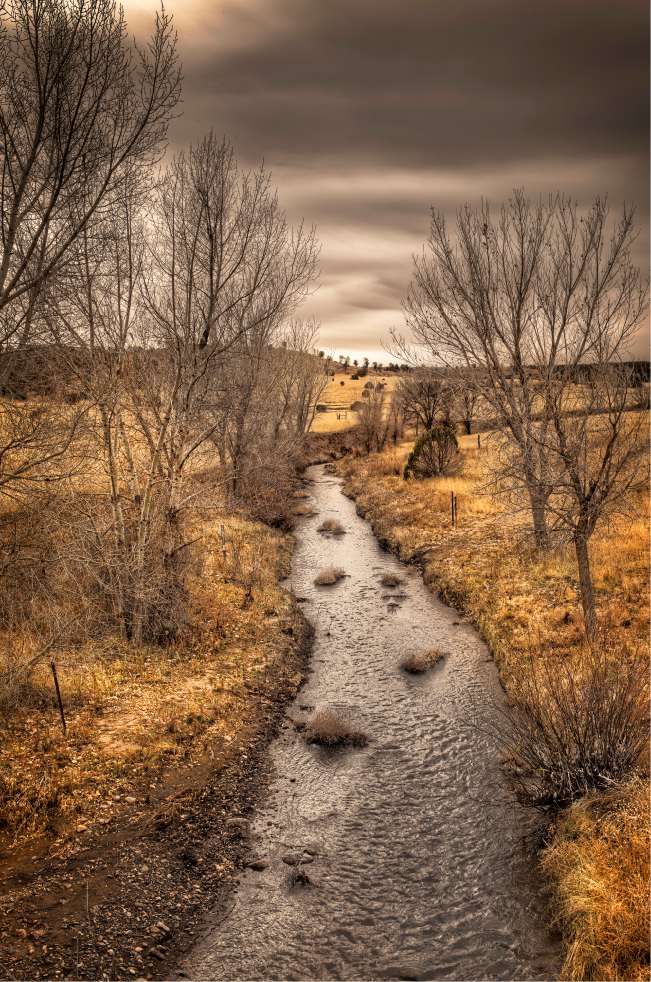 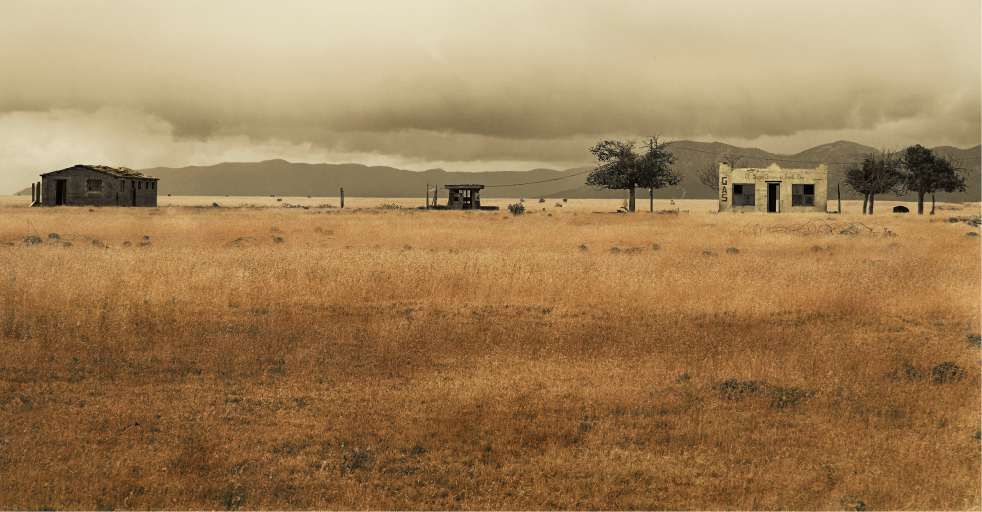 The photographs of Steven A. Jackson can be described as glowing fantasies, although they represent relatively subtle adjustments of reality. In Fields Near Picacho, NM, for example, we witness a more or less ordinary landscape transformed into the realm of the visionary by the photographer’s selective application of color. It thus possesses a striking edge of unreality, similar to some hand-colored black-and-white photographic prints.

The image is in several parts. A gently diagonal fence line separates the softly hued, slightly blurred grasses in the foreground from a yellower, riverlike field of rye. Beyond are rolling hills and cloudy skies, both rendered solely in grays, black, and white. This and Aspens, Holy Ghost Canyon, Pecos, NM — another print showing a little intentional blurring — are included in Corners: Photographs of the Southwest, an exhibit of Jackson’s work at New Concept Gallery. The photographs were produced between 2006 and July 2014. Artifacts & Icons, pieces by Jackson, painter Reg Loving, and sculptor Tim Prythero opens at the gallery on Aug. 15.

“I used to do black-and-white film and wet-darkroom work. Then when I switched to digital, I tried to do more of that, because that was what I was used to,” Jackson told Pasatiempo. “But I realized that the arguments about whether film or digital was better didn’t matter, because they’re different, and that fact meant that trying to do what I did with a film camera was kind of silly. I’m printing on a German matte art paper; it doesn’t look or feel like photo paper. I take a raw digital image, convert it to black and white, tone it, tint it, then bring some of the colors back, working with layers in Photoshop.” His preferences often result in images that he calls “a little weird and a little moody.” Another of those subtle adjustments of reality has to do with the exquisitely high level of detail achievable with the newest generation of digital cameras. Jackson’s Rio Bonito Near Capitan, NM shows amazing detail in the depiction of branches of leafless trees in winter against darkened skies. “Yeah, these new cameras are bizarre; they see things I don’t even see.”

Jackson’s Nikon D800 SLR, boasting 36-megapixel resolution, is a far cry from his first camera, which he used to shoot planaria, a type of flatworm. “When I was in high school I did photomicrography with an old Graflex, and the shutter mechanism didn’t work, so I had to turn the light on and off to try to get the right exposure time.” He was able to get more consistent results when his uncle gave him a Minolta SLR. Later on, he did some work with a medium-format camera and a view camera, “but the lenses were so expensive,” he said. “And it was just a hobby at that time. I ended up with a Nikon 35-millimeter system.”

A longtime Santa Fe resident, Jackson grew up in New Jersey and attended St. John’s College. Before being temporarily sidelined by a heart attack, he had a career in banking and real estate. Then he decided to focus on photography. At a certain point he fixated on printing, spending many hours in the darkroom. Then he began shooting and printing digitally. “The inks and the papers now are fantastic. I can get a product that’s as good as the old stuff [gelatin-silver prints from film negatives], but it’s different. And I don’t try to emulate what I would have done with a film camera. You can’t compare these pictures you see in the gallery to that, because I wouldn’t have done the same thing. It is a different medium. But there’s no question that it is photography and that I take photographs in the same considered manner, but what I’m visualizing in my head is nothing like what I would have done when I was shooting Panatomic-X [a fine-grain consumer film made by Kodak from the 1930s to the late 1980s, after which it was discontinued].”

At Bonanza Creek is another amazingly crisp landscape — “almost too precise for me,” Jackson commented. The picture demonstrates a dramatic contrast, with the sort of weird, beautiful sunlight that you sometimes see in landscapes under dark and stormy skies. Jackson said that most of that effect is a result of his being ready at the right moment, but he also emphasized the contrast in the print’s varied coloration.

His rendition of a familiar ancient adobe structure in Pecos Ruin Church and Sky is a standout not only due to its great detail and the vortex of clouds above but because of his ultra-wide view. “It’s almost fisheye, pretty close to a 180-degree view.” If this were a standard building, vertical wall edges and door and window frames would look distorted, but the tumble of adobe walls looks natural.

Gas, Galisteo Basin Near Stanley, NM, photographed in 2006, has been a popular image for Jackson. Only recently did he find out the truth about what appears to be an old gas station. A newer image, titled The Miller Place, offers a closer look at the building, which now includes graffiti. “When I was there, this guy comes across the road from his pickup. I thought ... he’s going to yell at me, but I’m not trespassing! But he just wanted to chat. He’s an old-timer from around there, and he said it was never a gas station. Somebody painted that stuff on there [‘GAS’ in large letters and the slogan ‘El Super Servicio de Santo Nino’ over the front door], but he didn’t know why. He said they’ve always known it as the Miller Place. The newer one I left strictly in black and white. I wanted it to look a little edgier compared with the early picture, which looks almost sedate.”

Also in the show at New Concept are studies of buildings, among them the historic Rawlins Building in the railroad district of Las Vegas, a deteriorating adobe in Bernal, a detail of the Lamy train depot, and a wooden porch in St. Elmo, Colorado. “What sort of ties these all together is that you won’t see a picture of a place like other people photograph, because either I don’t think correctly or I don’t think the way that you’re supposed to. I go by what I see in my head. It’s not going to look like a straight picture, because what I’m seeing is the gold in the grass and other particular things I like. I’m not into blue skies. You don’t see any in the gallery. And I tend to not like brightly saturated landscapes.”

Most of what Jackson shows us are “found subjects,” although he will remove beer cans or other junk — with the computer, if he can’t pick the stuff up. “I will take it out in Photoshop. I do blur things. I sharpen things. And I dodge and burn the crap out of this stuff. That’s how I get these skies.” Dodging and burning, traditional darkroom techniques the photographer uses to selectively lighten or darken certain areas of an image, have equivalents in the Photoshop tool palette. Jackson makes all his own prints and does the matting and framing himself.

Does he ever work in series, singling out a particular subject to pursue? “I’ve tried that,” he responded, “but I keep seeing things when I go by that interest me. What I do pretty much every year is I’ll pick a month, usually in winter, and do a picture a day. “I guess I never will be an editorial photographer or a documentary photographer. I don’t have an agenda. I just see things I think are interesting.” ◀

▼ Corners: Photographs of the Southwest, works by Steven A. Jackson; exhibit through Aug. 15.

Most of Jackson's images are "found subjects," although he will remove beer cans or other junk — with the computer if he can't pick the stuff up. "I will take it out in Photoshop. I do blur things. I sharpen things. And I dodge and burn the crap out of this stuff. That's how I get these skies."