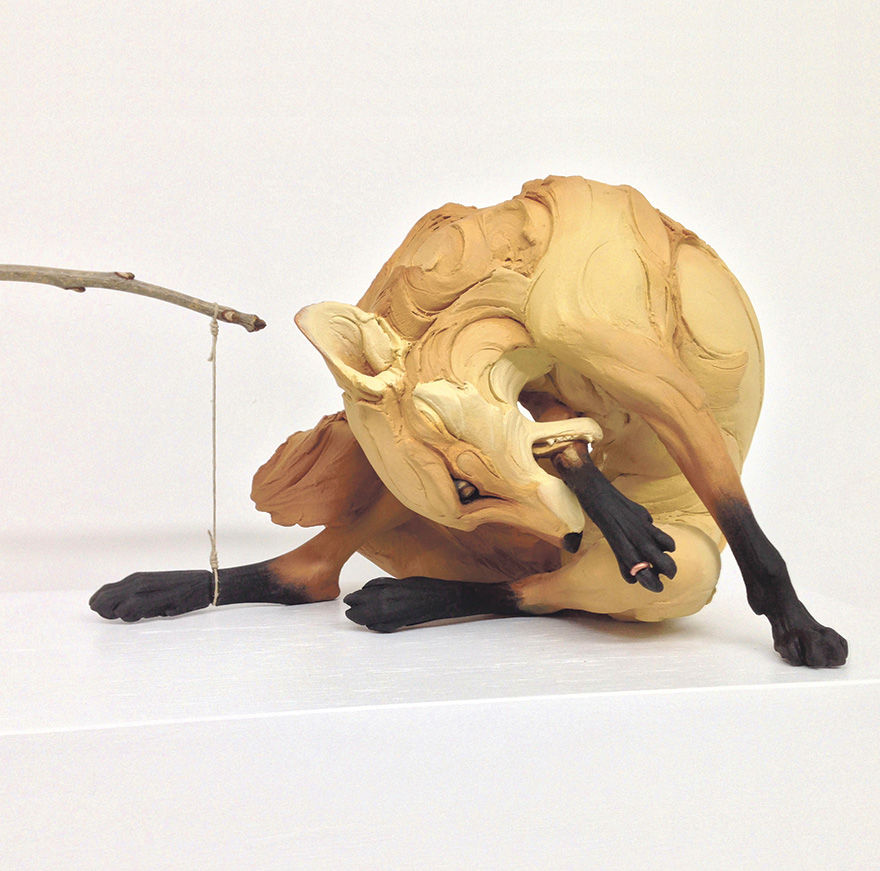 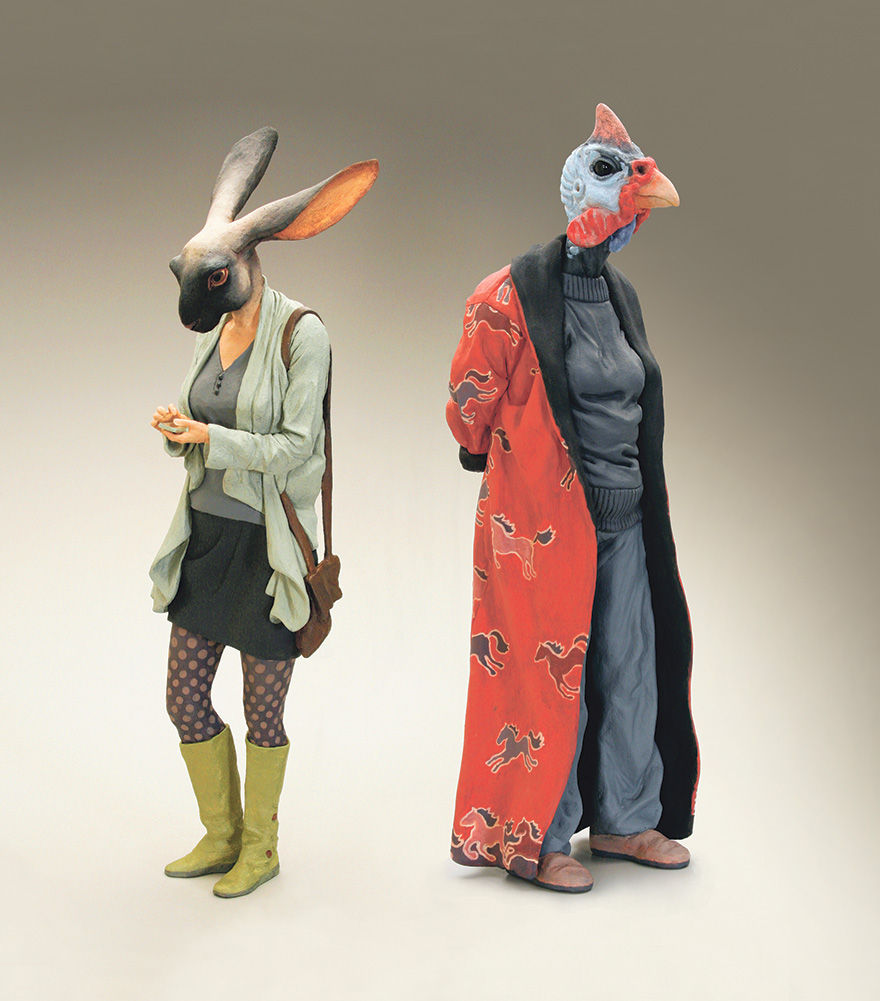 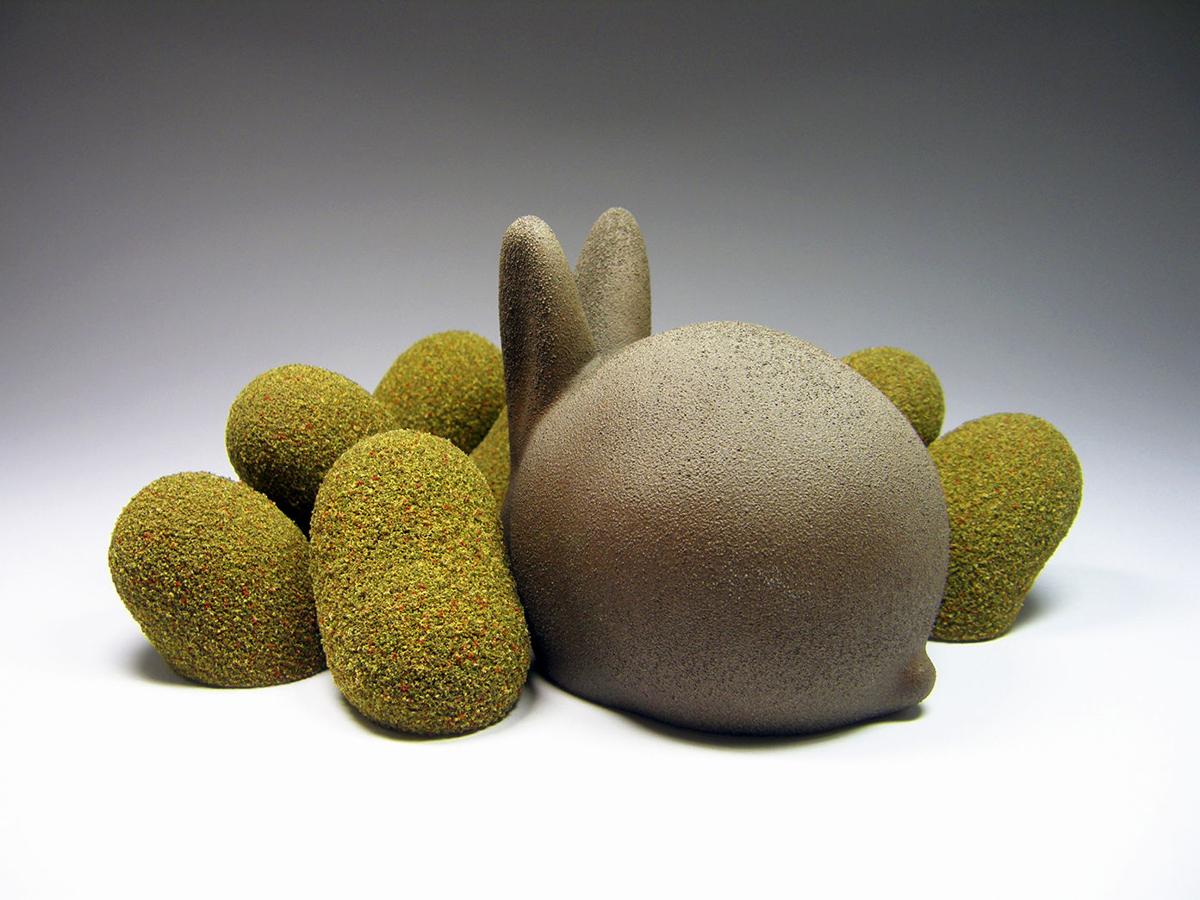 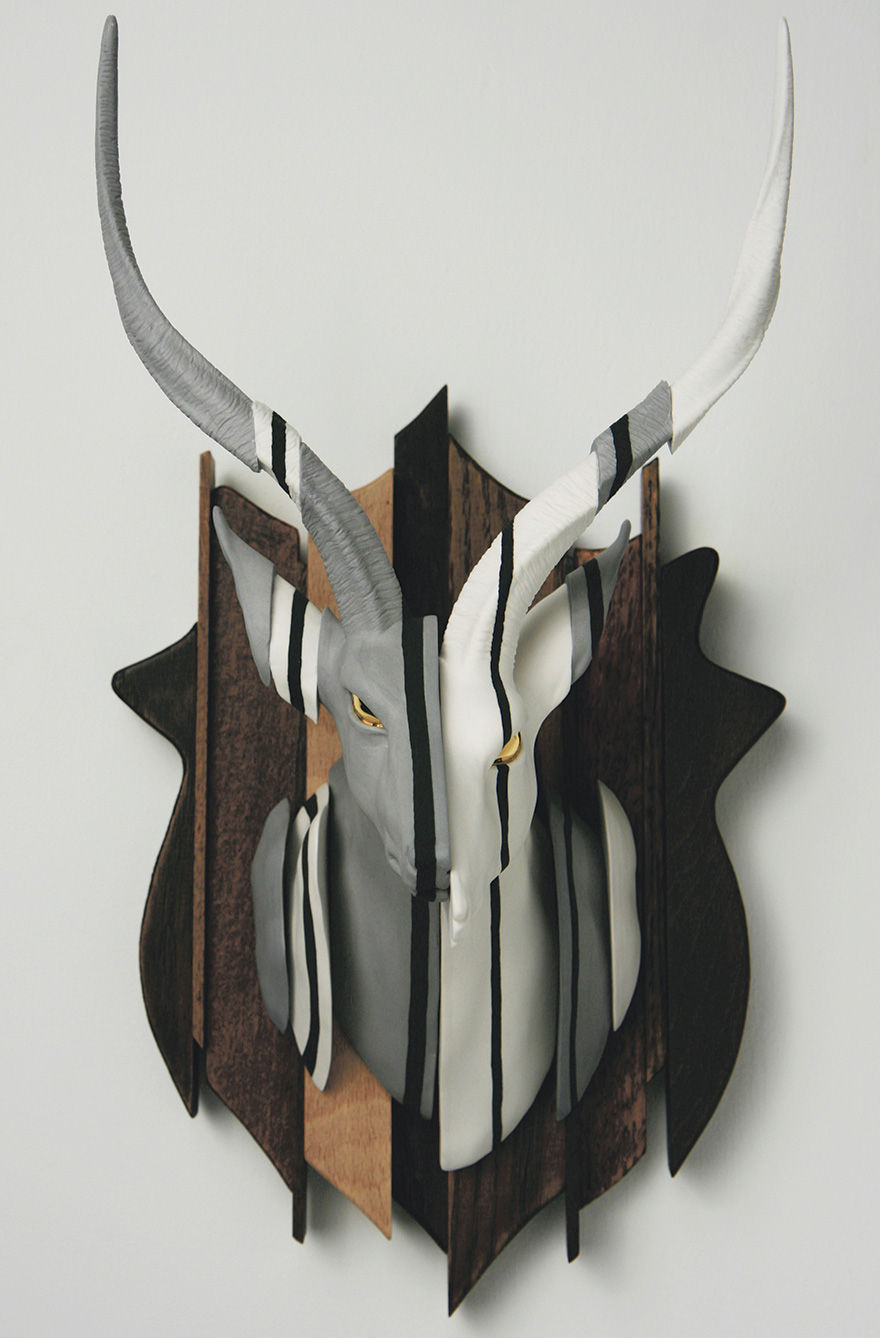 Curators Garth Clark and Mark Del Vecchio are professional and personal partners who ran galleries in Los Angeles and New York City for decades before moving to Santa Fe in 2008. Self-proclaimed “ceramophiles,” Clark pointed out that ceramic artwork was “looked upon as craft — and then when that label was removed, there was a frenzy to show the work.” According to Peters Projects director Ylise Kessler, Clark and Del Vecchio are consummate authorities in the field of contemporary ceramics. “I recently expanded our gallery program to incorporate a variety of disciplines, including contemporary ceramics,” Kessler told Pasatiempo, “so I was delighted when Garth and Mark accepted my invitation to curate an exhibition.” Many of the pieces in the show are ceramic works.

Thematically, the art in Trophies and Prey is sometimes as overt as a head mounted on a wall, but just as often it’s subtle, even playful. Clark has praised ceramicist Jeremy Brooks’ “sly humor,” which is apparent in works like Greener Greens. The ears of a diminutive, jade-hued rabbit poke through a cluster of ovoid, vaguely vegetal green shapes, whose surface looks fuzzy to the touch. The bunny’s rounded body, tucked among the soft-looking green capsules, makes for an oddly seductive assemblage.

Jeff Irwin is prodigiously represented in this exhibition, with more than half a dozen of his earthenware forest animals on view. Their milky whiteness feels pristine, even chilly; it pays off for viewers, who can examine a form and process unhindered by the distraction of color. The magnificent trio of animals in Win, Place, Show seem to burst from the wall, hooves thrust out beneath charging heads. Their bodies look like painted trees, riddled with stumps and cut-off branches, like scars from an axe. “Irwin’s point,” Clark explained, “is that if you destroy the forest, you destroy animal life as well. A wounded tree down the line is a wounded animal.”

Decidedly more playful, at least initially, is the work of Undine Brod, who repurposes used stuffed animals as captured prey, with cartoonishly rounded snouts and fuzzy fake fur. The artist sources her material from thrifted stuffed toys, which she skins and pieces together over mixed-media armatures. They’d be cute, but they’re missing eyeballs, an omission which prevents any lifelike attributes a mounted dead animal might have. Without eyes, the identity of Disillusioned, with its shaggy brown head and elongated, sloping nose is frustratingly obscured.

Jan Huling’s wall-mounted Reindeer Dance contains thousands of glued-on seed beads, applied in swirling, mesmerizing designs. The artist has said she’s inspired by the intricate, giddily colorful beadwork of Mexico’s Huichol Indians, whose process this piece certainly recalls. Kate MacDowell’s trio of capuchin monkeys (titled Nursemaid 1, 2, and 3) were hand-sculpted in porcelain, and each of them cares for a human infant, who suckles or cuddles its smiling caretaker. A bit more serious is John Byrd’s porcelain sculpture of a longhorn sheep, creamy white except for a narrow strip of gold between its curved horns. Perched regally on a cluster of jagged rocks, we at first don’t notice the gaping hole in its side, which offers a glimpse of the animal’s stomach and coiled intestines.

Before she was a sculptor, Adelaide Paul taught anatomy at the University of Pennsylvania’s Veterinary Hospital. For her latest body of work, the artist applied dyed leather and other materials to taxidermist’s mannequins. The elegant deer in Thrall has a gleaming, taut coat of turquoise leather, whose stitched seams look like delicate veins. Its stately appearance is accentuated by a candelabra-like headdress which sprouts dazzling gold-leafed antlers.

In addition to making contemporary sculpture, Michelle Erickson reproduces ceramics from the 17th and 18th century, a specialized field that has seen her work placed in national historical institutions and period-specific television series. Erickson’s contribution to Trophies and Prey is a trio of earthy slipware platters. The creature in Stingray is rendered in warm golden tones that stand in contrast to the black surface underneath. Its loosely abstracted body is imagined in dashes and gentle strokes, imbuing it with a slippery kinetic quality. Alessandro Gallo must sculpt with equal parts discipline and insouciance. Despite exaggerated animal heads, each has a distinctly human body, conveyed through contemporary posture and dress. Gallo’s Betta (Grey Hare) looks like a female college student, with slouchy boots and polka-dot tights — and the graceful head of a long-eared grey rabbit. The creature looks down at its phone, as if passing time at a bus stop. The fox in Beth Cavener’s Trapped has no human attributes to speak of, save for the small metal ring on its right front paw. One of his hind legs is ostensibly caught in the titular trap, although only its ankle is restrained with a loosely tied bit of rope; surely it would be easy for the animal to disentangle and free itself. Most puzzling is the fox’s fixation on its unrestrained right paw, which it gnaws on with opened jaws.

The work of South Korean artist Wookjae Maeng perhaps most clearly adheres to the exhibition’s theme. Made of slick white ceramic, Big Horn Sheep is beautiful and commanding, frozen but ultimately unyielding. Its metallic eyes are narrowed in an icy stair, and its mouth is set in a blatantly disapproving grimace. It’s as dramatic and arresting as an ancient Greek bust — and made with the same painstaking, reverential attention to detail. “Mark [Del Vecchio] and I have always viewed with horror the wholesale destruction of our habitat, and the blind, deaf, and dumb global warming deniers,” Clark said. “Most of the artists in this show deal with this and feel we are playing Russian roulette with Mother Nature, knowing that when she reaches a tipping point there will be no time for correction.” This exhibition is a nuanced, delightfully unique traipse through the animal kingdom that’s both aesthetically and politically provocative. ◀

▼ Trophies and Prey: A Contemporary Bestiary