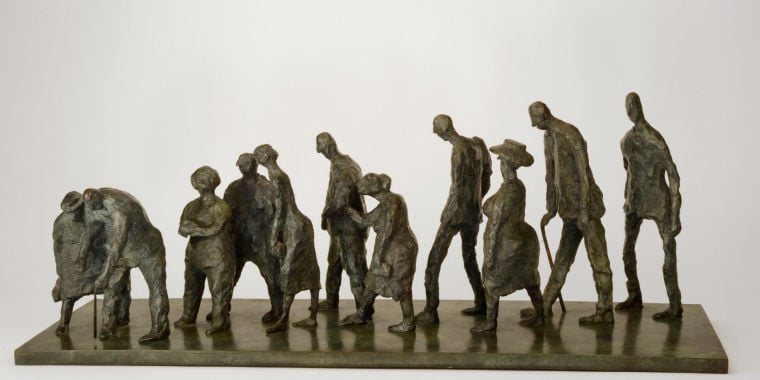 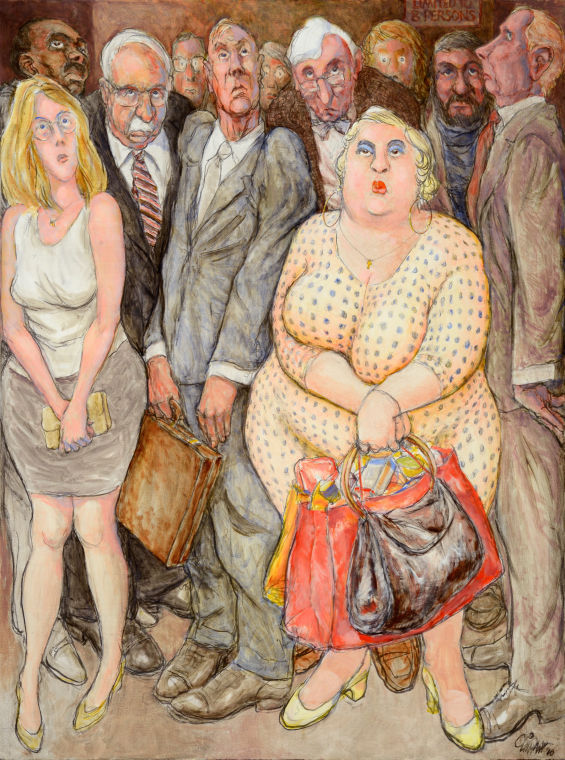 It has been 49 years since Santa Fe resident Patrick Oliphant moved to the United States from his native Australia, and through the decades since he has documented the governmental vagaries of his adopted country with an astuteness that has earned him a place in the pantheon of the greatest political cartoonists. A year after he arrived, his work began to be distributed through national and international syndication, and in 1967 he was awarded a Pulitzer Prize for a mournful frame he drew lamenting the nihilism of the Vietnam War, which was then going at full tilt. Nine presidents have occupied the White House during the Oliphant years — Johnson, Nixon, Ford, Carter, Reagan, Bush, Clinton, another Bush, Obama — and he has skewered them all, assisted by Punk, the alter-ego penguin that speaks truth to power from a corner of his frames.

Millions of readers follow his cartoons unswervingly — at the age of 77 he still produces three every week — but few of his fans have had the opportunity to view his artistic work outside that domain. On Friday, May 10, the Gerald Peters Gallery launches a month-long exhibition titled Patrick Oliphant: A Survey — Selections From Rome and Other Works, which casts a light on precisely those efforts in other genres: sculptures, paintings, drawings, prints, and monotypes. A number of the pieces on display are the fruit of his term last autumn as The Roy Lichtenstein Resident in the Arts at the American Academy in Rome. “It was my first sabbatical in 60 years,” Oliphant said as we strolled through the gallery while the show was being installed. “They gave us a huge place to stay, with windows overlooking Rome. We had three months of glorious ‘doing what you like,’ not even thinking about politics. We had the advantage to pretty much ignore the election last fall.”

Even though his Rome drawings were captured on the fly, they show the telling detail that also infuses his political work. A viewer may feel practically transported to the moments Oliphant has seized. A man quietly rolls a cigarette, surely unaware that the artist is observing him. A bigwig struts down the street, the center of his universe. “He was obviously the big man on campus,” Oliphant recalled, “with his secretary and a couple of sycophants dancing alongside him. He paid them no attention.” We nearly collide with an image of a weighty woman who claims the right-of-way, her bulk emphasized by the large scale of these drawings. “This woman was coming across a sidewalk. She must be an American tourist — or at least she was built like one.” How did he capture these fleeting images? “You see it, and you get to a pad and pencil fast. You wouldn’t be able to sketch them when you see them. People would probably be insulted.”

“I like working large,” he said, “especially in charcoal, which is such an expressive medium, or conté crayon. Cartooning, after a while, gets you into bad drawing habits. You start to use shorthand — quick solutions to drawing hands or anything. So I’ve always tried to keep up this kind of drawing to balance it, to keep myself honest. I love the feeling, the classicism.” Still, the elegance of the rendering may sometimes take a back seat to the subject matter. Consider, for instance, a large portrait titled Jesus at Fifty. There he sits, smoking a Marlboro and drinking a Bud, clearly the worse for wear. A gold-leaf halo encircles his head (“hard to photograph: it comes out black”), and doleful eyes underscore the caption: “I could have been real big as a preacher once.” Oliphant unveiled the piece in Chicago a half-dozen years ago. “People were scandalized, I suppose. That’s how it goes.” He is not a man to let any subject off easy, and you can’t accuse him of cutting corners when it comes to technique. In fact, the piece really is a classical study: a sacred subject embraced within folds of gracefully flowing cloth.

Many of the works in the show, however, depict the same figures Oliphant’s political cartoons have inspected over the years, though here generalized into portraits or sculptures rather than crafted for a specific caption. In truth, they say all that needs to be said, even without accompanying verbiage. One of the earliest of the 10 bronze sculptures in the show depicts Lyndon Baines Johnson in his ten-gallon hat — though here more like thirty-gallon. George H.W. Bush, lean and lanky, is captured in a balletic stretch, about to throw a horseshoe. “It’s a Giacometti-type Bush,” Oliphant said. “He had a horseshoe court on the White House grounds at the time. I’d met him just previous to that, and he was taller and skinnier than I thought he was, so it suggested that treatment.” The second President Bush is pictured in a jester’s hat perched on a solid steed — a Clydesdale, perhaps — with his vice-president walking alongside, armed with a quail-hunting gun, holding the reins. “That’s the nation,” the artist explained, “a big, friendly horse in the hands of these idiots.” One of the most mesmerizing sculptures is of Barack Obama, who takes the form of an inscrutable Easter Island moai. “There’s a barrier between you and him. There’s a stillness about Obama that’s hard to penetrate.” The secondary cast of politicos is also well represented: Donald Rumsfeld as a Prussian general with a spiked helmet; a bloated Norman Schwarzkopf; Jesse Helms modeled after the Venus de Milo and very close to nude. “At the time, Helms was the enemy of all forms of art, so that suggested to me a classic form, without arms — and a small fig leaf.”

Sculptures have now occupied Oliphant for more than three decades, and he considers them an essential part of his oeuvre. “They provide another dimension, and a texture, that drawing does not, and the patina. All the things that are delicious about sculpture you try to pass along in the cartoons, but it isn’t always possible.” One senses, too, that, compared to Oliphant the cartoonist, Oliphant the sculptor or painter relishes being liberated to work at a considerably larger scale. Some of the pieces in the show occupy impressive dimensions, including a conté crayon drawing, titled Marathon, in which more than 400 caricatured runners race in rows across a nearly 4-foot-by-5-foot sheet, and a generously scaled painting in which 11 office denizens are crowded into an elevator, not quite obscuring a sign reading “Limited to 8 Persons.”At the opening of his show, Oliphant will spend some time planted near this painting, producing drawings or, as he put it: “What do you call it? Performance art.”

Back at his home, he shows off the two rooms that serve as his studios. The more cramped is the inner sanctum, filled with books and cabinets and who knows what. There he produces his political cartoons at a desk laden with pens and bottles of ink, droplets of which have splattered insouciantly onto the wall. One reaches it through a larger room where his non-cartoon works come into being. “I wouldn’t want to say this room is for fine art,” he said, “because cartoons are fine art. It’s all of one thing, really.” In any case, the larger studio is dominated by a huge easel constructed with counterweights that allow it to be easily adjusted, bringing any point in the canvas or paper to eye level for the artist, a boon when he is working on a large-scale painting or drawing. His sculpting wheel sits empty, but that may soon change since he has decided on what his next subject will be. “I want to do Gertrude Stein and Alice B. Toklas, nude. Can’t wait, actually. Right now, I’m just keeping it in mind to see how it turns out in my head. The process starts with composition. I do some sketches to get it into my head but then probably won’t refer to them again. Then I will start forming the wax over the armature. For a long time I worked with pieces that didn’t have a sketch for guidance, but I tore them down because I wasn’t happy with them. You have to do that, to be your own editor.”

Some favorite sculptures are sitting around, including one of Richard Nixon in his familiar “victory” pose, a sculpture that sold out immediately back in the day. Asked precisely who it is that wants a sculpture of Nixon as part of their daily surroundings, Oliphant allowed that some of his pieces would seem more for museum collections than for individuals. The LBJ presidential library owns his Johnson sculpture, the Smithsonian owns some of his bronzes, and the National Portrait Gallery possesses 10 — all his presidential sculptures, “except not Obama, yet.” ◀

▼ Patrick Oliphant: A Survey — Selections From Rome and Other Works

(catalog signing with Oliphant at 2 p.m. Saturday, May 11)