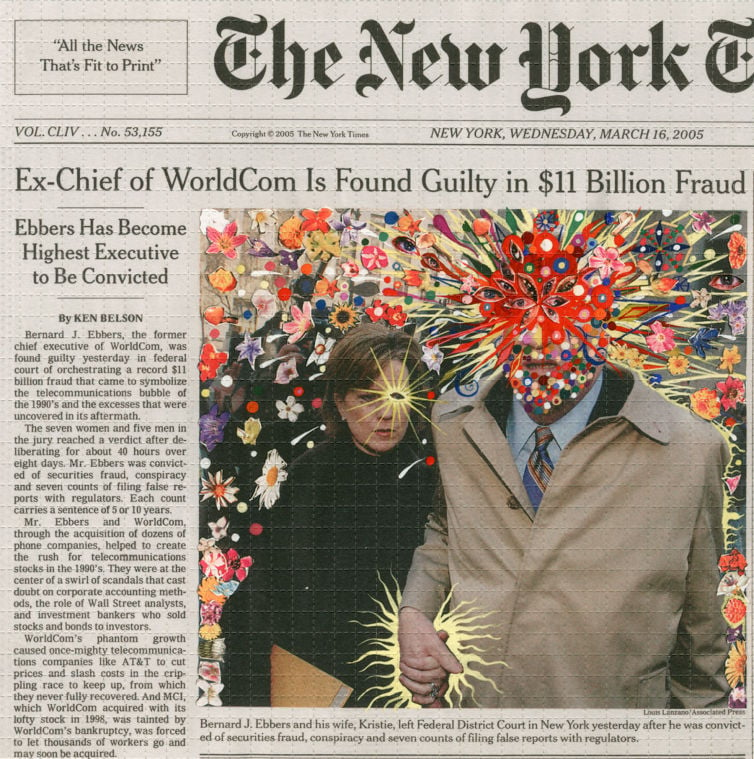 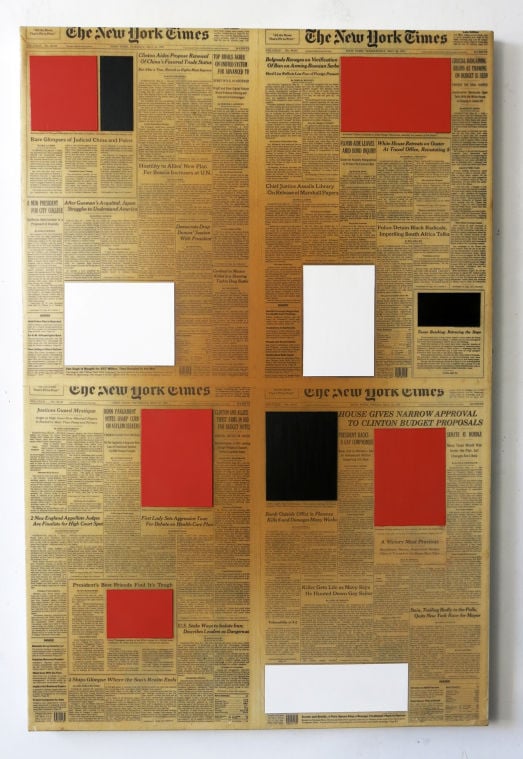 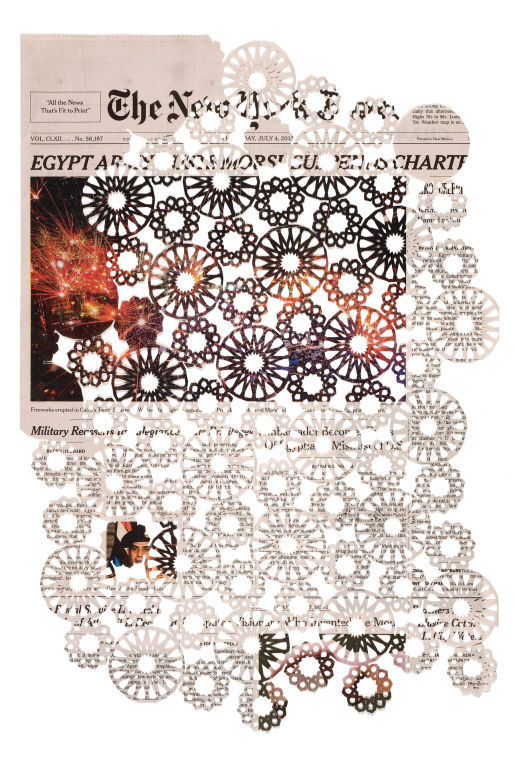 “Saudi King Says Jets Are Needed to Curb Reds’ Mideast Gains.” “Quayle Meets With Saudi Royalty and Seeks More Aid for Military.” These are two of the hundreds of headlines that A.J. Bocchino harvested from nearly seven decades of New York Times stories relating to what he calls a long-standing oil-for-protection bargain between Saudi Arabia and the United States. A very large dye-sublimation print of the headlines is included in All the News That’s Fit to Print, opening Friday, Jan. 24, in the Spector Ripps Project Space at the Center for Contemporary Arts.

The exhibition also features All the Heads on the Front Pages of the New York Times. The 12 drawings in this series — each one a crowded cluster of sketchy head shapes — were made by artist Pat Boas in the first year of the new millennium. Another work relating to the nation’s “newspaper of record” is Quotidian by Donna Ruff. The Santa Fe-based artist is co-curator of All the News with CCA visual arts director Erin Elder. The other artists represented in the exhibit — all incorporating The New York Times into their work — are Lauren DiCioccio, Shanti Grumbine, Elissa Levy, Francesca Pastine, Guy Richards Smit, Adam Simon, and Fred Tomaselli.

For Quotidian, a new piece made for the show, Ruff employed a laser cutter to remove all text and photographs from copies of New York Times front pages. “Normally in a work like this, I would cut the paper myself, but I was doing so many of them: there will be 28 of these draped over the rungs of a 16-foot ladder going up to the ceiling,” she said. “These are on hand-made Japanese paper, which is a little translucent and sort of ephemeral-looking. They’re almost ghostly, and they will be rising to the ceiling and floating out into the darkness.

“There’s a reason why so many artists work with The New York Times. I mean, it’s the paper of record. There’s a gravitas to this newspaper. I have read it every day for at least 40 years. It’s really part of my life. But I’ve always been interested in language and comprehension, and for the last 10 years or so, I’ve worked with the idea of taking away content and what is left behind.”

Ruff, who was born in Chicago and grew up in Miami, has family precedents for working with paper. Her great-grandfather was a bookbinder in Russia, and her grandparents owned a Chicago scrap-paper factory. “They would buy encyclopedias by weight as scrap, with the pages sliced through so they couldn’t be resold. My grandmother taped them back together and gave them to us. Something inchoate remains — the slicing, the mending, the labor-intensive work.”

Ruff was a children’s book illustrator during a period of residence in New York City. She has an affinity for the Manhattan telephone book and for religious texts such as the Torah and the Qur’an, as well as for The Times. Traces of these sources can be glimpsed in the various works in her Lena Street studio.

In one series, she obliterated sections of story text by cutting Islamic wheel patterns out of newspaper pages. “This kind of coincided with the Arab spring, and there’s this idea of taking away and also leaving behind. In the case of a lot of the artists in the show, I think because of all that’s come out about redaction of documents, they’re taking stuff out of The Times and recontextualizing it, but it’s still very recognizable as The New York Times. That’s true even if you can only see a tiny piece of a headline, because the typeface [in the Cheltenham family of fonts] is so recognizable.”

Her esteem for the printed word, affected by realities of censorship, is cryptically evident in past works such as Encyclopedia Britannica and Grrltalk, which consist of artfully shredded book pages. A series featuring pull quotes from The Times was printed on graphite-treated mylar, then torn and wrinkled. In another series of beautifully dark pieces, she transferred newspaper photos onto glossy Japanese paper, then squeegeed ink and acrylic paints over them to lend a printmaking quality.

“A lot of these photos I’m using are of women or children who have been impacted by war, and there’s the idea of the veil, and isolation, and silencing. All those things have gone into my interest in geometric, calligraphic patterns and redaction, and when you remove things, something is left behind, so there is a beauty and people will spend some time with it, but at the same time there’s an elegiac kind of sadness to it.”

Oregon artist Boas, contacted before she began her day teaching painting at Portland State University, said her All the Heads on the Front Pages of the New York Times pieces were completed in 2002. “They’re done on silk tissue that’s made from a gampi fiber. I used a blue-gray ink and a small brush, tracing them in a calligraphic way.”

Her portfolio holds works in a great variety, all in two dimensions. Among them are pale, subtle interpretations of Times front pages (NYT Alphabet), outrageously colorful and organic shapes (Mutatis Mutandis), and abstraction play with letter and iconography (Unalphabetic).

A later series, NYT Little People (created during 2008 and 2009), was a reprise of the theme of heads in the newspaper. “I felt that All the Heads didn’t really represent the content,” she explained. “The newer ones are gouache paintings, concentrating on the people who were relatively unknown. I was hoping to get more of a sense of what was actually happening in the news.”

She has noticed what could be an example of positive journalistic evolution in the past decade or so. “When I was working on All the Heads it was apparent — and you see this in the drawings — that the big heads are the big leaders, and they’re almost always male. The only time you’d see images of things happening in the Third World would be crowds after a disaster, like a flood in India. But as I kept on looking, by 2008 that had really changed. Now, more often than not, you see everyday people illustrating stories.”

The bulk of Bocchino’s art projects have repurposed headlines and text from the American media. “I’ve used mostly The New York Times because it’s the most comprehensive in regard to foreign policy, which is a lot of the subject matter I use,” he said from his home in Brooklyn. “I used to take the main headlines from the front page every day and then color-code them by subject. Then I started to get more specific. The piece in Santa Fe [United States and Saudi Arabia (Oil/Protection)] is composed of headlines from 1940 to 2008 related to the relationship between the United States and Saudi Arabia, about access to oil and the U.S. providing protection and arms to the Saudis.”

The fabric piece is 9 feet high and 14 feet long; Bocchino wanted it to resemble a flag. He has done similar hand-colored works. This one, though, was made by superimposing frames of color over the headline text. The work is in two shades of green, one mimicking the green of the Saudi flag and the other resembling camouflage green to symbolize the protection aspect of the relationship.

Bocchino’s other recent works chronicle the history of conflicts in the South China Sea and the East China Sea and look at the United States as the world’s policeman. “It’s stuff that’s current but also has a history to it,” he said.

“I read four papers every day. Most of it related to my work, although at this point, sports hasn’t made it into the work.” ◀

▼ All the News That’s Fit to Print

Crockett Bodelson and Sandra Wang figure they’ll have more than 700 artworks ready for the Friday, Jan. 24, opening of ICEPOP. In this many-pronged show at the Center for Contemporary Arts, they examine ice, polar exploration, and mobility. The show runs through March 30.

“We’re working on the pieces now. They’re still coming out of the kiln,” Bodelson said. “We’re using an English product called frost porcelain. What drew us to think about ice was working with this clay. The title of the show fits in most with this installation that depicts Antarctica 100 years ago and Endurance, the 1914 Sir Ernest Shackleton expedition, and contemporary Antarctica. There are over 250 people living there year-round now, and it’s opening up to tourism, but there is a treaty to keeps it neutral and pristine. For an artist it’s inspiring because it’s an untouched place, and it isn’t supercharged like the Arctic with all the politics about oil drilling.”

Bodelson and Wang, who met in 2007 in San Francisco, make up the collective SCUBA. They curated nine exhibitions at their (now-defunct) Caldera Gallery on Baca Street in 2011 and 2012. In December 2013, they sold their art objects in a “Storesalon” space at SITE Santa Fe.

A center of the ICEPOP installation, in CCA’s Muñoz Waxman Gallery, is their modified 1989 Ford Econoline van, which appears as if it’s floating on water. The vehicle has a name: Ice Shelf. “Sandra and I used to live in it, and we had a painting studio inside. We’d drive it up and down California, painting in Joshua Tree and Big Sur and other places.”

The hundreds of small artworks are like drawings. The artists flatten pieces of frost porcelain in a clay press, draw and cut shapes with a needle tool, and then apply acrylic paint. “They’ll hang on two walls of the gallery,” Bodelson said. “We’ll also have 375 porcelain tiles that we had in the Currents show [Santa Fe International New Media Festival] last summer. They have animations of water molecules breaking apart that come alive with a light projector.”