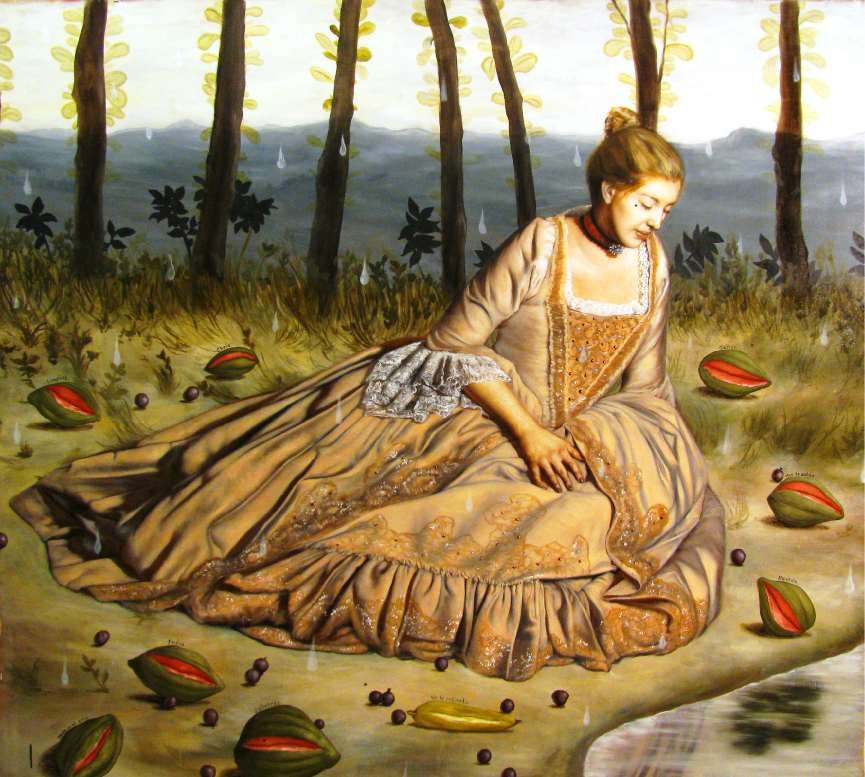 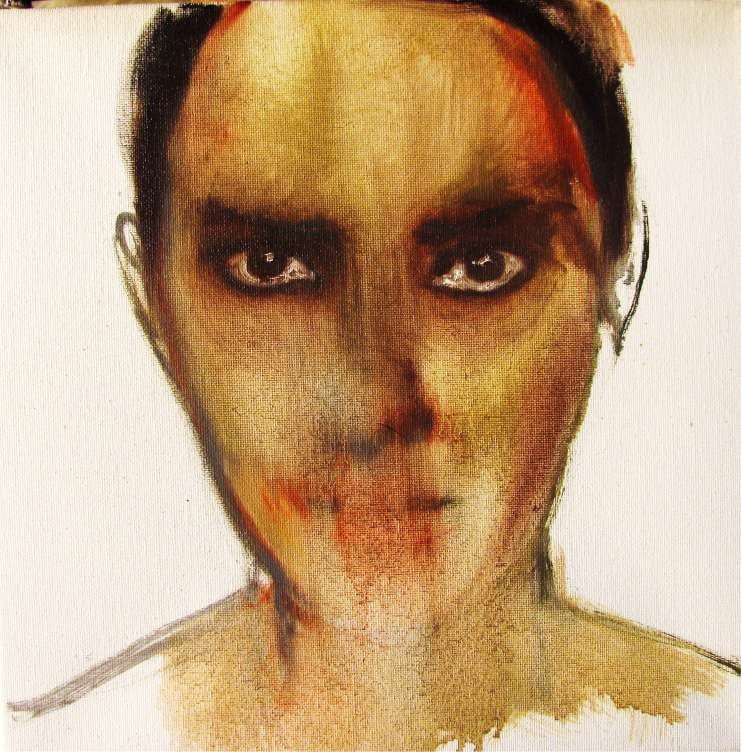 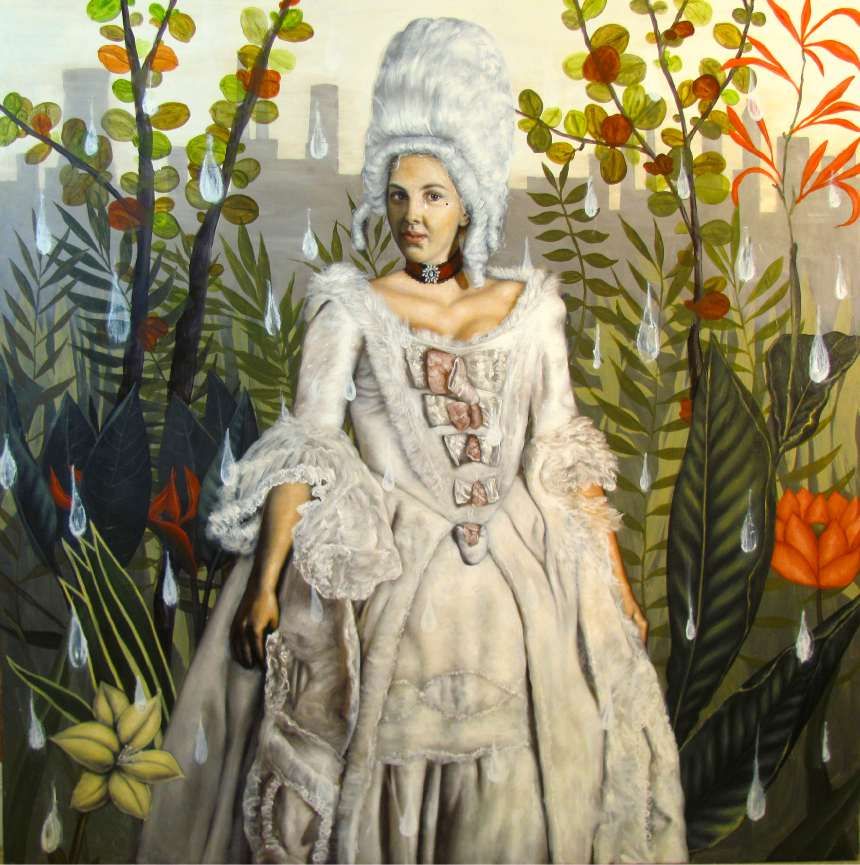 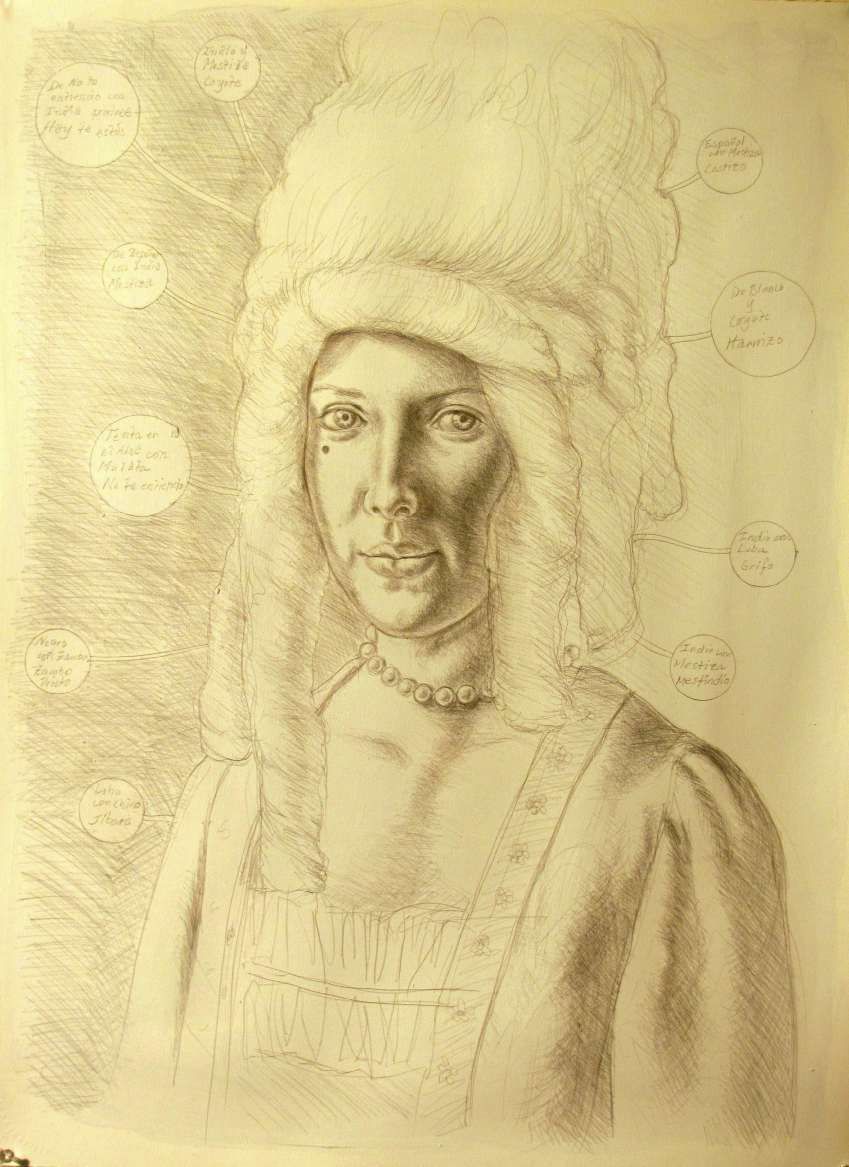 On a trip to Spain last year to visit his ailing father, local artist Francisco Benítez made a discovery at the Museo Nacional del Prado in Madrid. In time, the revelation inspired Benítez to research European encounters with indigenous peoples of the New World. “My father was a Spaniard from Madrid,” Benítez told Pasatiempo. “He lived here with my mom, María Benítez, the dancer, most of his adult life, but he had a hard time adapting. He was a theater person back in Madrid. When he moved to this country he was kind of the force behind my mom, dealing with the company and managing everybody. But he always had a foot in the door back home. It was a pretty emotional trip. At one point I went to the Prado to see what was up, and there was one room I went through that had all these 18th-century aristocratic portraits of women. I tried to imagine what it was like for these women. Behind their faces was a story. I imagined what their court life was like and what it was like to be living in those times.”

On Thursday, Oct. 30, Benítez’s preoccupation with the historic engagement of the Old and New Worlds culminates in the multimedia exhibition Doña Inés Lost Her Slipper, a broad-themed fictional exploration of the relationship between Doña Inés, a Spanish aristocrat, and a Native American woman forced into servitude. The show, on view at the Santa Fe Community College Visual Arts Gallery, includes formal portraits of Doña Inés, rendered in older painting styles that draw heavily on casta painting — a New World genre developed in the 17th and 18th centuries as a way to depict mixed-race peoples — as well as paintings of the maidservant, rendered in more contemporary styles. Through additional artwork such as pastel portraits, photographs, drawings, and video, Benítez tells a broken but compelling tale. The setting is the Americas, where the theme of displacement affects both heroines of this story: Doña Inés has been taken from the rarefied world she knew in Spain; the maidservant has been forcibly removed from her Native culture.

“I started thinking about my connection with Spain, but also about my connection with my Native American culture, because my grandmother on my mother’s side was Chippewa and Oneida. I lived with her for a num-ber of years and went to school on the rez when I was a kid. I would be hanging out with the Indian kids, and then I went to school in Spain. I was going back and forth between two cultures that were diametrically opposed. I was trying to reconcile these two worlds in my head.”

To make his vision manifest, Benítez sought out models, one for each of his two female subjects, leading to a serendipitous encounter. Benítez had an idea in his head of the look he was going for, which came in the person of Leigh Gregoire Scariano, his model for Inés. “I had to find the ‘aristocrat,’ quote unquote. A friend of mine, the daughter of an artist, had a similar face. She ended up posing as the aristocrat. She could easily be a member of the Hapsburg family.” Finding the right model for the maidservant proved more difficult. Then Clark Baughan, director of the Visual Arts Gallery, mentioned a young woman, Mona Bear, who works on the campus. “I wrote and said, ‘What are you?’ And she said, ‘I’m Menominee.’ And I almost hit the floor because my grandmother, even though she was Chippewa, lived on the Menominee reservation. I asked the woman what town she was from, and she said Keshena, Wisconsin, and my grandmother was from the same town. It’s a very strange coincidence. This woman just happens to be in New Mexico, where there are tons of Native people all around. But what are the chances you’re going to find a Menominee? I got to know her mom, who actually knew members of my family up there.”

Doña Inés Lost Her Slipper is intriguing in its narrative elements as well as its juxtapositions of antiquated and contemporary art forms. Benítez uses various mediums and styles to interpret and convey a sense of identity for both his female characters. A series of black-and-white photographs of the maidservant, for instance, progresses from detailed portrait to obscure, blurred images of the same face, the latter reflecting a loss of identity. The more formal renderings of Inés, stiff but composed in period dress, tell a similar tale. “In depicting her, I wanted to make some references to historical precedents because there was a strong code then about representation of the aristocracy. A lot of their identity was centered on their name and family history. What gets lost is the individual behind all this stuff.”

One casta-style composition shows Inés posed gracefully by a pond and surrounded by opened fruits. Along with the sexual connotations they convey, the pieces of fruit bear labels used to categorize mixed-race peoples under Spanish New World rule. The depiction of native peoples, flora, fauna, and foods was a frequently employed illustrative method of furnishing Spaniards back in Europe with details about encounters in the Americas. “The Spanish authorities commissioned artists to do these to send back to Spain so they could know how this new society was being created. They were trying to show a racial hierarchy. If you were a Spaniard and an Indian, you would be a mestizo. I would be called a castizo because I’m a quarter Native.”

Another likeness of Inés was rendered in pastels, after the dominant portrait-making style in 18th-century France. Some of the paintings of Inés conflate era-appropriate ways of rendering landscapes with modern cityscapes. One in particular, Doña Inés in Industrial Landscape, depicts her in the foreground, surrounded by vegetation, with smokestacks and skyscrapers in the background. “I was imagining the aristocrat mimicking the pose I see in a lot of these 18th-century portraits where they’re standing with their head to the side, looking at the viewer. I wanted to juxtapose it with this contemporary landscape, which, in my mind, is the manifestation of the meeting of these two worlds. When Europeans came to this part of the world they set in motion this whole industrial culture we’re still dealing with today. She’s plunged into this almost tropical, savage landscape. She comes from this aristocratic world and is thrown into this wild America. But out of this whole thing comes our modern society, with smokestacks, highways, radioactive waste, and all this stuff. It’s a poetic allusion to that.”

The exhibit’s title refers to an incident depicted in the video component, a collaboration with videographer Mari Angulo, in which the maidservant dreams of freedom. “It’s kind of a reference to Cinderella. She’s this maidservant who had these slippers and for a certain amount of time was allowed to become a princess. If she doesn’t get the slippers back by midnight, she turns back into a maidservant. There’s an image in the video where she steals the slippers from the aristocrat and she runs into the landscape. At one point she removes them, because they’re too much of an inconvenience, and just goes barefoot. It’s a metaphor, again, about the racial and class divide. The slippers are so impractical, like the formal dress. It’s for show, a signifier of the upper class.”

Rather than rely on traditional painting techniques to represent the maidservant, Benítez shows her in a series of portraits — some small and some large — made with fluid, gestural brushstrokes. The figurative imagery is abstracted, but it’s clear they depict the same person. As in the photographs, her identity is ill-defined. But the face in each is expressive, with attention paid to the soulful, penetrating eyes. “The servant class is like this invisible presence. I thought that there’s not a way of really representing her in flesh and blood. There’s no precedent. I was trying to create her identity by imagining her inner life and her struggle. The question becomes: How much does she retain of her identity, and how is she integrated into the household to become like the people there?”

As if to underscore that these two women were both locked in social roles, despite their economic and cultural differences, only one of Benítez’s images presents Dona Inés and her servant together in the same space. In that scenario, one gets the sense that the women might be able to enjoy a more personal, if still unequal, relationship. “Many times, the aristocrats developed much more intimate relationships with their maid staffs. They could confide certain things. When you were with other people in high society, you had to maintain a certain facade. The people helping you in the bedroom, you could tell them your worries and your secrets.” ◀

Benítez's preoccupation with the historic engagement of Old and New Worlds culminates in this multimedia exhibition — a broad-themed fictional exploration of the relationship between a Spanish aristocrat and a Native American woman forced into servitude.

Paco's exhibition is wonderful....he is a world class painter and the pastel portraits inspired by Jean Clouet are remarkable...I hope given the opportunity to experiment with this medium he will do more.. and you would never know they were his "first". Great article delving into the complexity and magic of this show.