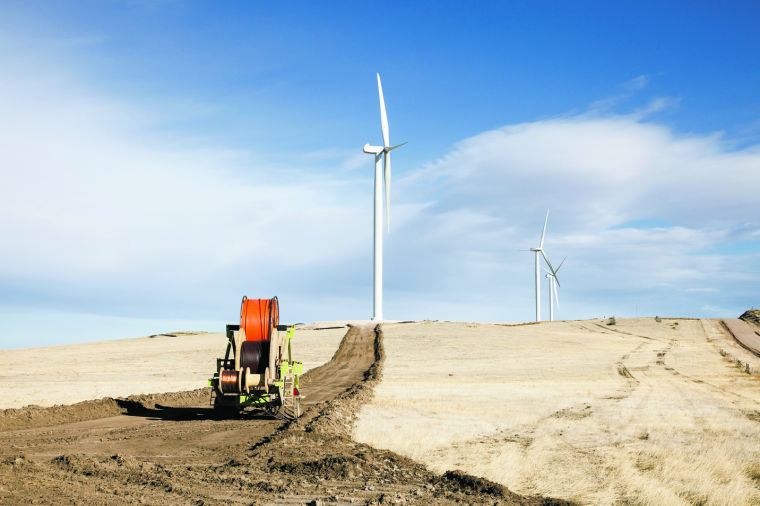 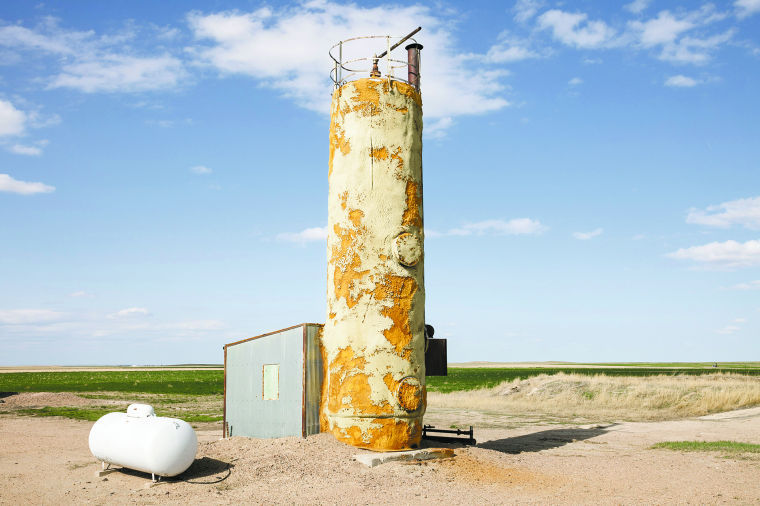 There is a dark side to renewable-energy equipment such as solar panels and wind turbines. While the infrastructure for renewable energy seems to have less impact on the environment than drilling for oil, mining coal, and hydraulic fracturing (commonly known as fracking), the structures that harness that energy still mar the landscape.

“Most of these photographs were made in eastern Colorado,” O’Connell told Pasatiempo. “I live in Denver. I’ve been making pictures in eastern Colorado since the early ’90s — a long time — and I can see the changes that have happened just in my brief period here that have been occurring really rapidly. Some of my favorite places I used to go to — for example, the Pawnee Grasslands up in northern Colorado, which is a National Grassland — suddenly were filled with wind turbines, and I was really distressed by it. That’s just how I felt about what I was seeing done to the land. Then I started thinking about it in a larger context, how the Great Plains have been this really abused area of the country. You can go back to the buffalo hunts and the genocides of Native Americans. We have nuclear weapons out there. We’ve drilled and spilled oil and gas, and now we’re fracking and building wind turbines. Most people don’t see this area. It’s flyover country. When you spend a lot of time there it really hits home what we’re doing in the name of consumption and the whole sociological impact people have on the environment.”

Fracking is controversial — among other reasons, because there may be groundwater contamination from high levels of extracted methane and because of the possibility that the practice can induce earthquakes due to the pressure it puts on seismic faults. Nevertheless, O’Connell photographs his subjects with a kind of reverence. An old rusted tank may not be the Acropolis, but it is among the ruins that could remain a part of the record of our culture. The wind turbines have an appeal due to their sleek designs, and their spinning blades appear silent from a distance. “I was trained as an engineer back in the late ’70s and early ’80s. So I do have a respect for science and technology. When you look at them, they’re great feats of engineering. But there’s the paradox. I’ve heard things described as terrible beauties before, and whether it’s the amazing design of an F30 fighter plane or these wind turbines, they are elegant in their own way, but they’re going to end up just like the oil and gas infrastructure, make no mistake about it. They are machines, and they’re going to wear out. They’re already decommissioning lots of them. I have a friend, Donald Lipski, who does a lot of public artwork, and he just appropriated three spent first-generation wind turbine blades. He got them for free. They just sit in boneyards now.”

O’Connell still photographs more pristine landscapes without any silos, turbines, pumps, and tanks in sight, but there is often a suggestion of previous human activity on the land, captured in features such as scorched trees and grasses, depressions in the earth that may indicate the locations of old mines, and desert vistas with smoke rising in the distance.

Early in his career, O’Connell was interested in photographing the Colorado landscape, with its majestic vastness as his subject. “I grew up in the Chicago area in northwest Indiana,” he said. It’s a rust belt now. At the time, we had steel mills and refineries, so I came from a very different visual landscape. When I moved to Colorado in 1981, I couldn’t get my head around all this space. It took me 10 years before I could even try to photograph it. I would make these massive landscapes and print them as 5 x 7 platinum prints. They were small pictures of really immense things. Then I picked up on the changes in the land and was more interested in the infrastructure. A lot of the things that are out there you don’t see at first. There was a whole slew of abandoned oil structures out there. That lasted until maybe within the last five years, when they developed fracking and figured out how to get more out of them. Then I discovered all the Minuteman III silos out there. I think there are something like 29 Minuteman silos on the Pawnee Grasslands. It’s really kind of freaky. It’s one of those things where you have an awe, but it’s an uncomfortable awe. You think, My God, this 100-square-yard fenced-in area has the power to destroy an entire city, and there it is just sitting there.”

Because of the attention paid to the remnants and mechanisms of America’s energy infrastructure, O’Connell’s work may put you in mind of German photographers Bernd and Hilla Becher and their numerous images of Europe’s old and new water towers, cooling tanks, oil refineries, and grain silos. But the Bechers viewed these subjects as variations on sculptural or architectural themes, while O’Connell’s work is tied more to energy consumption’s long-term effects. “People have made the comparison before, but I don’t really see these as typologies,” O’Connell said. “My work is really about being in this land. I am interested in the formal aspects of things, but I don’t obsess with that. I’m interested more in the infrastructure and where that’s going.” ◀