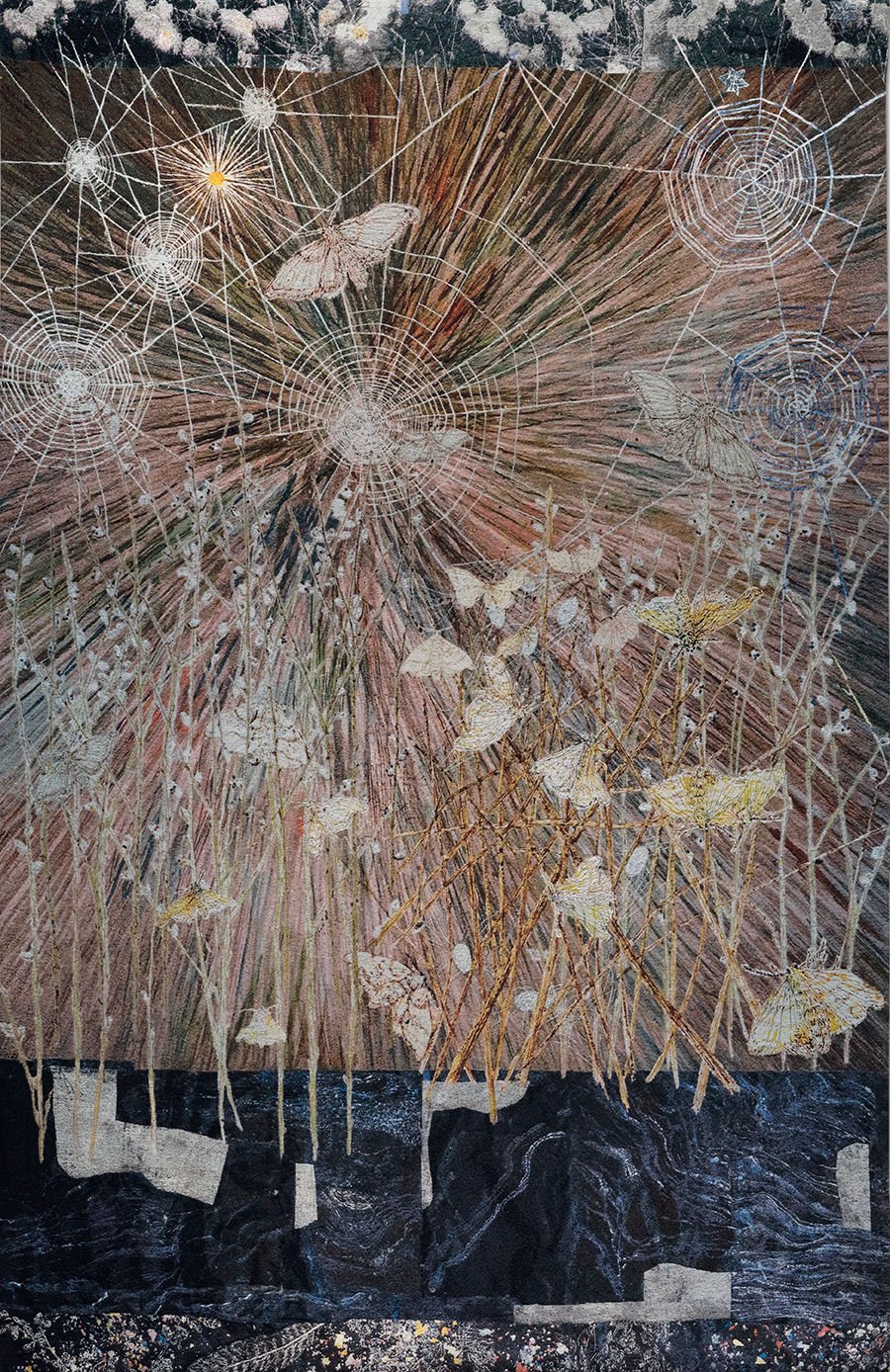 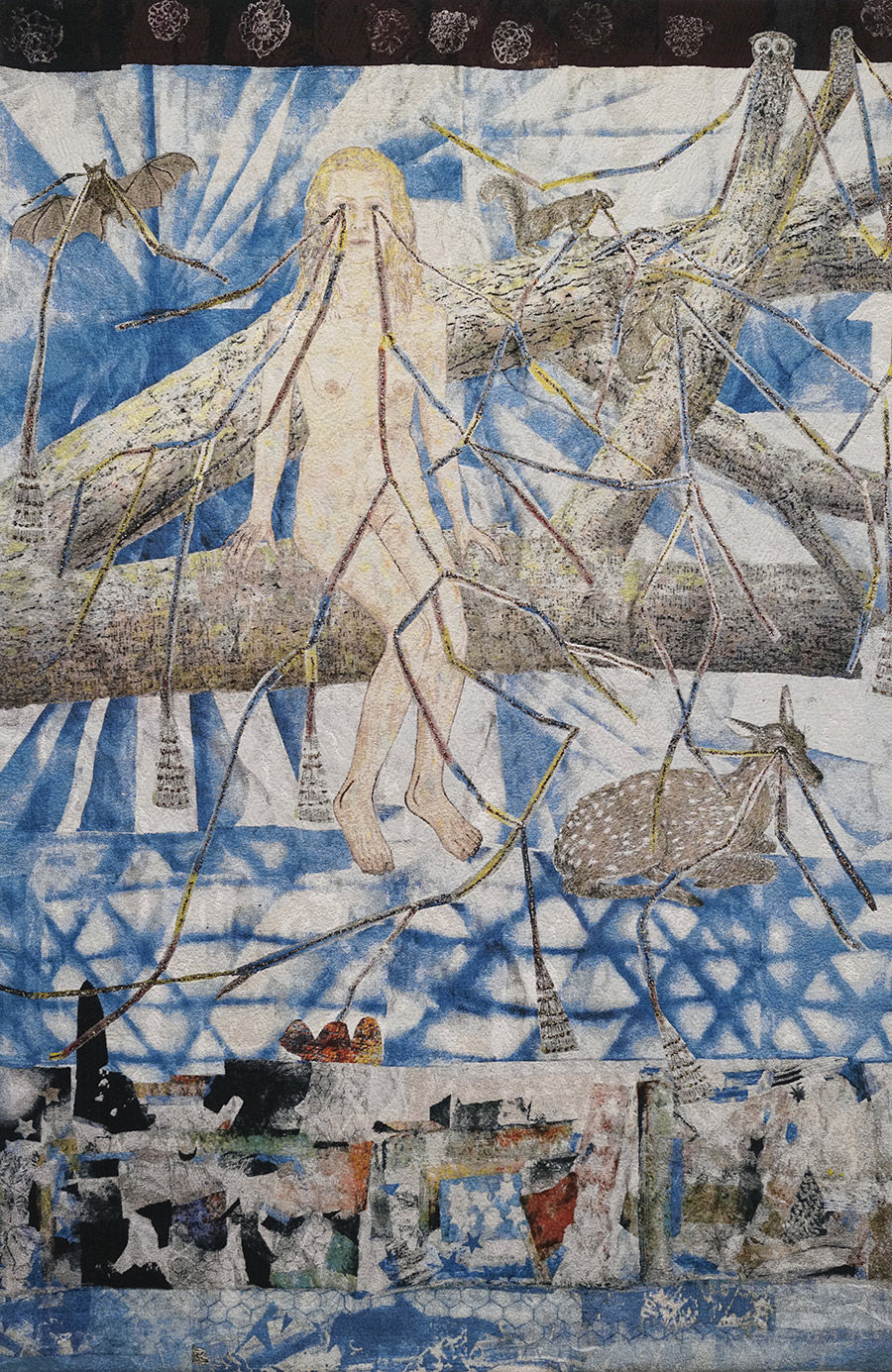 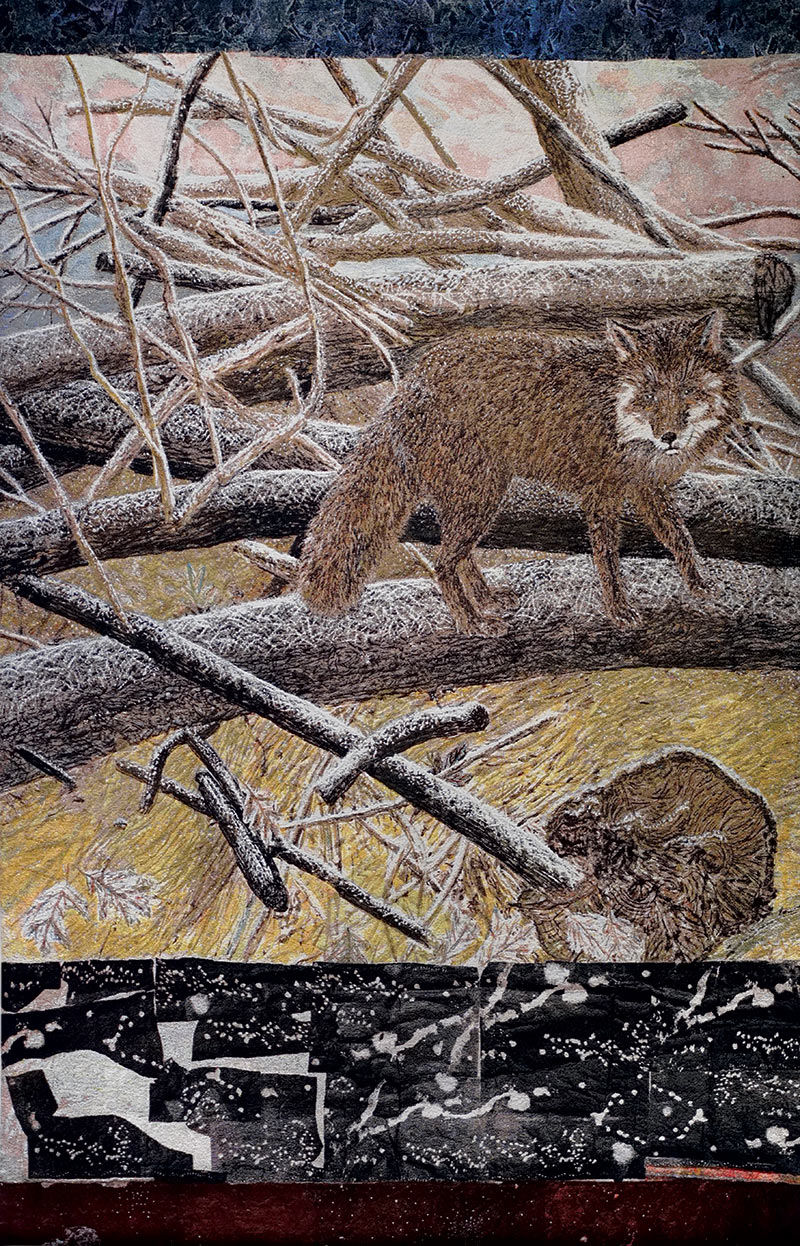 New York-based Kiki Smith saw the Apocalypse Tapestry, a set of late-14th-century French tapestries depicting scenes from the Book of Revelation, as a young adult on a formative visit to Angers. Medieval tapestries like the Apocalypse Tapestry are hung unframed but contain borders, delineating compositions that conflate moments from myth or history into a single, cohesive scene. The narrative and allegorical imagery of these historic textiles inspired a set of contemporary tapestries by Smith, an artist with an international reputation, particularly renowned for her sculpture. Her exhibit Woven Tales opens at Peters Projects on Friday, May 13. She took an approach similar to artists of the past in her own work, filling it with emblematic imagery and referencing the compositional components of historic weavings. “A lot of tapestries have these decorative and architectural borders,” Smith told Pasatiempo. “If you look at a large-scale tapestry, it’s not just a picture. There is, quite often, this decorative space. It’s rare that you don’t see it. It works as a framing device. I try to keep some of the allegorical elements, narrative elements, and decorative elements.”

The 11 large-scale tapestries in Woven Tales were produced in collaboration with Magnolia Editions, a fine art studio located in Oakland, California, that specializes in advanced digital printing techniques and Jacquard weavings. Woven Tales is the largest showing of Smith’s tapestries to date. “I have shown several together before, but I keep adding new ones,” she said. Smith’s show runs concurrently with another exhibit opening at Peters Projects, Magnolia Editions: Innovation & Collaboration, a selection of works by artists who have worked with the printing studio, including Enrique Chagoya, Bruce Conner, Magnolia co-directors Donald and Era Farnsworth, and Deborah Oropallo. The Jacquard loom, developed in the early 19th century by Joseph Marie Jacquard, is a machine that reads perforated cards that correspond to warp threads. The punch-card technique influenced the development of computer technology in the 20th century, and Jacquard looms today are digitized. Magnolia sends completed contemporary designs to a small, family-owned mill in Belgium, where they’re woven on a Jacquard loom, matching color for color, detail for detail, the original design. “The whole thing about a Jacquard loom is that you can make thousands of copies if you wanted,” Smith said. “The card program tells the loom when to move. There’s a lot of personal intervention before, during, and after, and a lot of decision-making, but it’s still a machine doing the weaving.”

Smith’s tapestries can be read as narrative pieces, but their imagery suggests open-ended meanings with variable interpretations, not unlike the illustrations on a set of tarot cards. In Earth, a figure reminiscent of Eve in the Garden of Eden is framed on one side by an angular, leafy branch, and on the other, by a serpent. All of Smith’s tapestries are divided into horizontal, banded sections, with the top section suggesting the firmament, the middle suggesting terrestrial space, and the bottom section suggesting the underworld. The tripartite compositions echo the earliest works in the series, which are titled Earth, Sky, and Underground. “I pretend they’re something like RKO movie marquees or posters. In my fantasy life, they’re something between 1920s and ’30s glamour, spectacle, and pageantry, and the Middle Ages, and the hippie movement.”

A motif of animal imagery runs throughout the series. The animals’ presence is sometimes subtle, as with the butterflies in Sky or the rabbit in Underground. But often, an animal form is the central figure, such as the wolf in Cathedral, the eagles in Guide, and the deer in Fortune. “The animals are mostly animals from where I live,” Smith said.

Historically, tapestries fulfilled a utilitarian as well as decorative function. “They are primarily about warmth, living in stone buildings against cold walls,” Smith said. “They were like a conceit. People gave them as presents.” Her own tapestries retain a size befitting the stateliness of their forebears: textiles that hung on castle walls or large estates, or that ornamented the high-ceilinged interiors of churches and cathedrals. Magnolia’s tapestry production began in 1999, when West Coast artist John Nava was commissioned to do a series of works for the Cathedral of Our Lady of the Angels in Los Angeles. Nava worked with Donald Farnsworth to develop the tapestries, after his original plan for sand-blasted relief sculptures was abandoned when it was determined that the sculptures would negatively impact the acoustics of the space. Tapestries were an acceptable solution, and they had a legacy as narrative art.

Since then, Magnolia has worked on tapestries with artists Hung Liu, Dan McCleary, Lewis deSoto, Squeak Carnwath, and dozens of others, in addition to Smith. “I met them five or six years ago, maybe even more,” she said. “They worked with Chuck Close. Chuck Close shows at Pace Gallery, and he had made a group of large-scale black-and-white images from daguerreotypes he had taken of people.” Smith also shows at Pace Gallery, and was working in black and white at the time Magnolia invited her to do a project. She saw it as an opportunity to explore color. “You get an enormous variety of color and information in a Jacquard tapestry even though it’s what we would consider a very low dpi. We’re used to seeing about 300 dpi in print and the tapestries are at about 25 dpi. There’s a tremendous amount of colors that can to be reproduced. I’m also very fond of Jacquard looms because I’m on the East Coast and there was a great history of itinerant weavers here in the 18th and 19th century. People spun their own wool and flax, and itinerant weavers came around and wove it for them. It’s a rich history in New York and Pennsylvania.”

Smith begins each tapestry by making what is called a cartoon, a full-scale model of the design. “For me, that was very important. When I first started making them, I wanted everything really one-to-one. They’re all made primarily from collage. I start by making a drawing and then turn the drawing into a photo-litho, then collage elements together. From conception, the drawing of a cartoon, photographing that, sending that, working on that in the computer, and reworking it by hand, there’s a lot of translation that happens. Even after that, I often change them. Sometimes we hand-color them, too. It’s about a year or two of back and forth. The people at Magnolia put in a lot of time pondering it all. It is a real collaboration. They have a lot of technical aptitude and technical passion. They’re really pushing what printmaking and edition-making is.” ◀