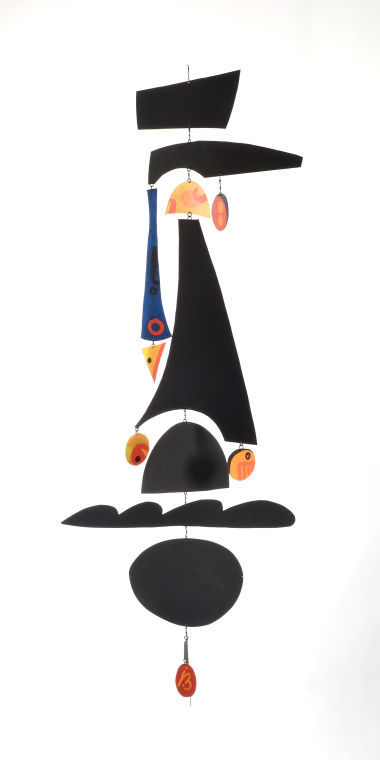 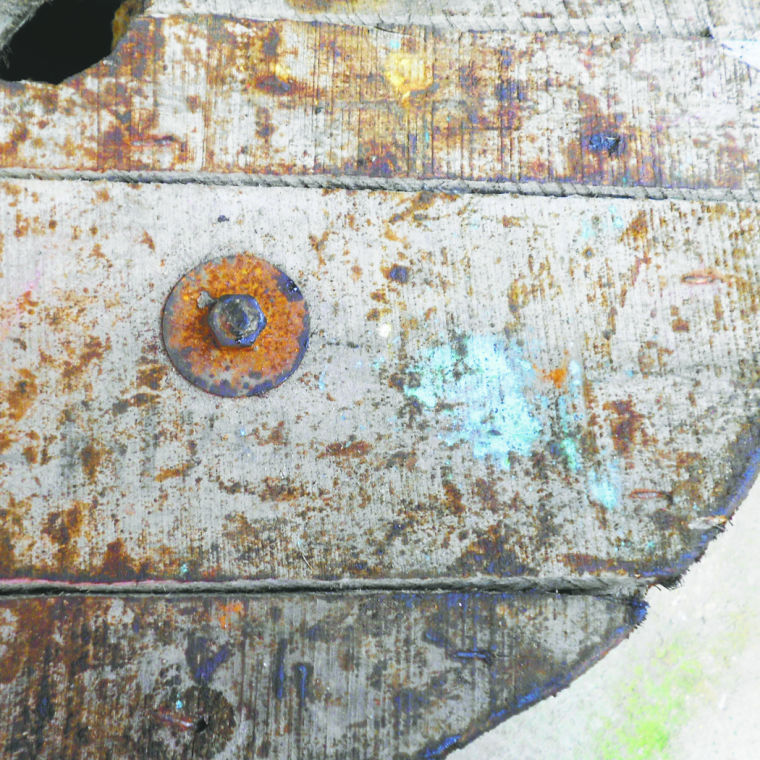 Think of mobiles as sculptures in the round. The weighted components, hung from rods in perfect equilibrium, are often flat, but mobiles are kinetic, offering different views as they slowly turn, suspended in space. The elements of Ivan Barnett’s mobile sculptures, on display in the exhibit Abstraction at Patina Gallery, vary in size and shape and hang in balanced compositions.

Barnett, co-owner of the gallery with his wife, Allison Buschbaum-Barnett, was influenced by American craft movements throughout the 20th century and was often labeled a folk artist in his early career. While his work reflects an interest in folk-art traditions, one can sense the influence of painters such as Joan Miró and the geometric abstractions of Wassily Kandinsky. The shapes in his mobiles are generally non-objective, but there are additions, here and there, of recognizable forms such as hand symbols derived from Eastern cultures, crescent-moon shapes, and ovoid forms reminiscent of design elements in the tribal art of the Pacific Northwest. “My early influences as an artist, going back to art-school days in the late ’60s, were always indigenous cultures,” Barnett told Pasatiempo. “I started a studio in Pennsylvania. The work I was doing had influences relating to folk cultures, folk art, Native art, African art. There’s no doubt that Northwest Coast was something I was looking at.”

Barnett had a pleasant surprise while visiting the Museum of International Folk Art soon after the 1982 opening of Multiple Visions: A Common Bond, permanently housed in the museum’s Girard Wing. There, he saw that folk-art collector Alexander Girard, who purchased Barnett’s work, included his pieces in the exhibit. “They’re still there because they never change the exhibition,” Barnett said. “Those early pieces have a real folk influence. As I moved on in my creative life, I started to put aside the obvious influences. That being said, when I see folk art that has such strength and design, I’m bowled over. You look at an African mask or an Amish quilt, you look at the color, design, shape — it’s like someone went to the best design art school you can imagine.”

Barnett’s mobiles have touches of color but are predominantly coated in a flat-black base paint. The hints of color — rings, circles, stripes, dots, and ovals — are used sparingly, as accents. Apart from that, the mobiles appear as silhouettes. “When I did these, I dug deep to really live in the abstract. I had a show here three years ago. It was the beginning of that process. I remember doing the last piece in that show, a total abstract piece. I said to myself, the next body of work, I’m going to start there.”

Barnett does not sketch out the designs in advance. Rather, he has a pile of shapes cut from sheets of steel and tries out different pieces until he finds a configuration that works. There is a hint of frivolity in the result, but the effect is not purely whimsical. The mobiles adhere to elements of design such as consideration of shape and line. There is a tightness to the sculptures that does not inhibit the freedom of movement in space. The nearly monochromatic appearance is bold and graphic. “I take what I do seriously, but in the process of doing the work I make sure that I have fun. I love the play part. I think so many artists get desperately attached to something that they’re working on. Fortunately, this material is not precious material. If I’m working on a piece and I’m not having fun, the beauty isn’t there.”

Barnett finds inspiration in the unfettered expressiveness of children’s art and the purity of Abstract Expressionism. “Go to any school and start looking at bulletin boards and see what the kids are doing. We all hear that cliché when someone goes to a museum, sees a [Jackson] Pollock, and says, ‘My kid could do it.’ I understand why people say it. What they don’t realize is that, for Pollock, it was a whole chunk of his life where he was continually moving forward in that kind of idiom. That’s the difference. A kid does a one-off. The best stuff comes when they’re younger. But when you start looking at the bulletin board of fifth- and sixth-graders, they’re already getting self-conscious to the point where they’re making it the way they think it should be. They’ve lost that spontaneity. When you think of that, then think of mature, older people returning to the roots of naiveness, that’s not so easy. You’ve got your skills on your back, and art history on your back, the artists you love, your teachers, and anything else. It’s all playing in your head.”

In addition to Barnett’s mobiles, Abstraction includes a small series of photographs he shot in China in 2012. The images are close-up studies of patterns and textures. Except for an occasional Chinese character or word in Mandarin, there’s little in the photographs to give a sense of place. Barnett’s interest is in conceptual rather than pictorial representation. “When I started to do this project with the mobiles, which I knew I was going to do, I thought, this is all about abstraction. All the images I shot were also abstract. They became close-in, intimate designs. It’s all about design for me. To me design is everything in art, whether it’s realistic or not.” ◀