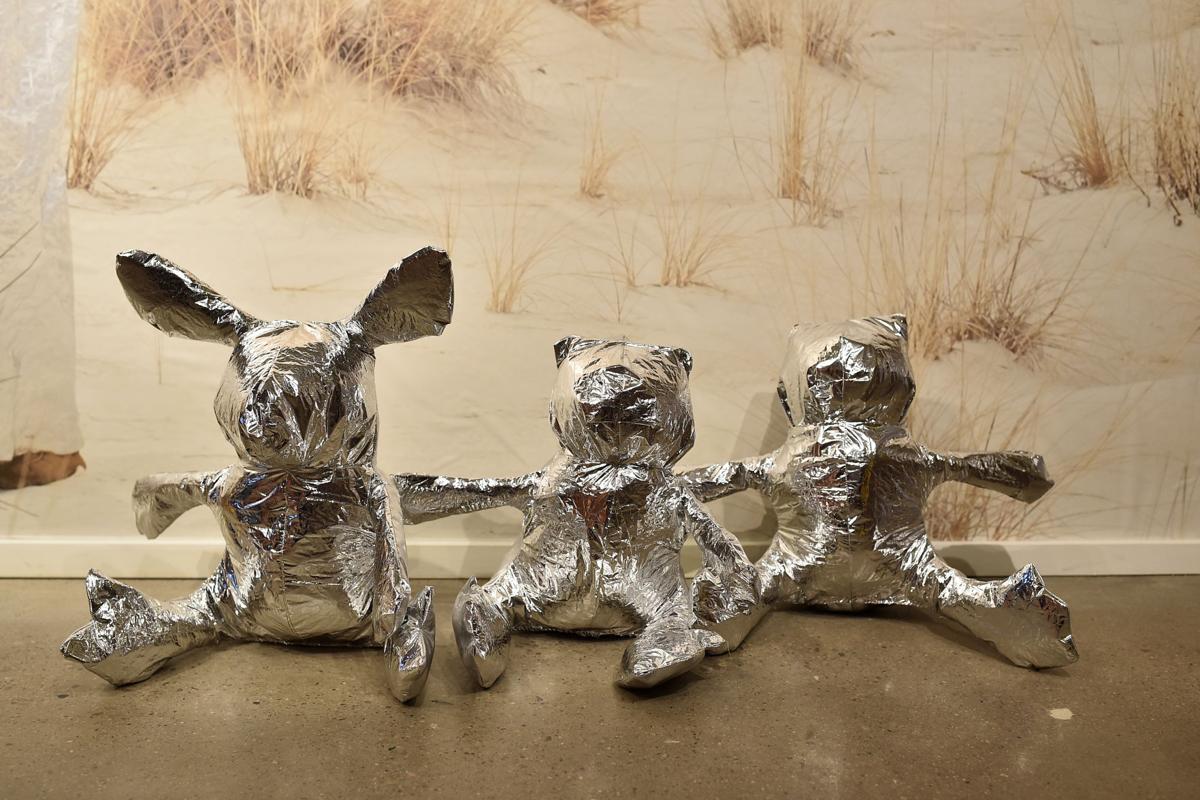 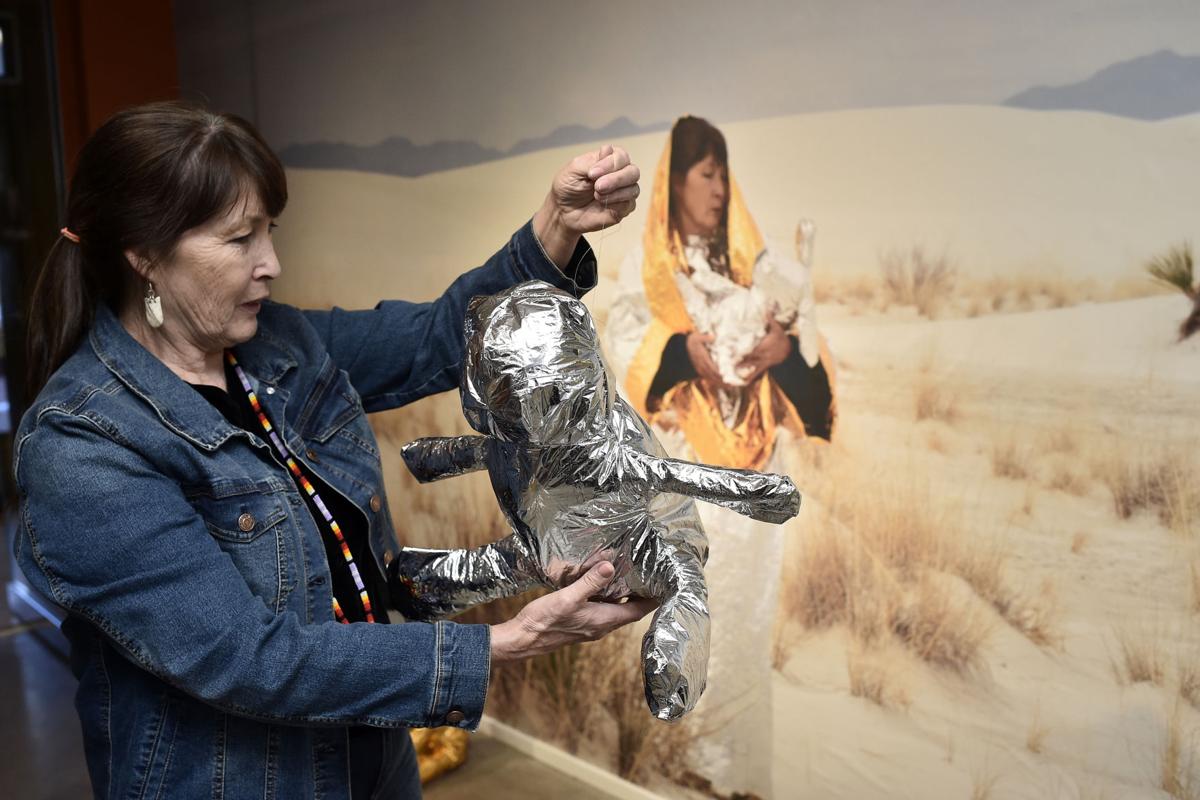 It was a harrowing sight: a father and his young daughter lying dead, face down in the muddy waters on the banks of the Río Grande. The man, 25-year-old Salvadoran immigrant Óscar Alberto Martínez Ramírez, was hoping to cross the border from Mexico into the United States, seeking asylum for himself, his wife, Tania Vanessa Ávalos, and his 23-month-old daughter, Valeria. But Ramírez, with his daughter clinging to his back, couldn’t navigate the rough waters of the river, and they were swept away as Ávalos watched in helpless terror from the opposite bank.

Their deaths on June 24, 2019, were a chilling reminder of the perilous journey immigrants face in pursuit of the southern border. The widely reported incident sparked outrage across the United States and the world. And it was the impetus for Charlene Teters, artist, activist, and academic dean at the Institute of American Indian Arts, to take action.

“That was the trigger for me,” says Teters, whose installation, Way of Sorrows, continues through May 17 at the IAIA Museum of Contemporary Native Arts. “It’s still very haunting.” The installation addresses the current immigration crisis on the southern border, and part of her intention is to see that the issue remains in the public consciousness. “The people, many of them children imprisoned in the camps, are deliberately treated cruel, and some have died,” says the 68-year-old artist and educator. “We don’t even hear about it anymore.”

The installation is designed, in part, to recreate the experience of the border crossing, including fencing that guides the visitor through the museum’s North Gallery. A large photographic mural covers the wall to the left of the gallery entrance, depicting the life-sized figure of Teters at White Sands National Monument, dressed as Our Lady of Survival — a persona she adopted for a series of site-specific, documented performances. “I also call her Our Lady of Refugees,” says Teters, who outfitted herself for the performances in regalia she made from reflective Mylar emergency blankets. On the opposite wall, another photographic mural depicts the same figure standing by the border wall. “The performance has been going on for a few months. She appears in different places. I call them sightings," she says. Most people, when they see her, they recognize the emergency blanket. To me, she’s a symbol of hope. She’s made appearances here in Santa Fe, White Sands, and the U.S./Mexico border.”

Stuffed animals adorned with cotton-filled Mylar hang from the ceiling of the installation like piñatas, symbolizing all the children separated from families at the border and the overcrowded camps and government-run facilities. Teters says she intended the toys to look like piñatas, in order to call attention to the fragility of the children and the abuses they’ve suffered. As part of a joint investigation with the PBS series Frontline, the Associated Press reported in November that the detained children risk long-term physical and emotional damage from their incarceration. The report stated that nearly 70,000 migrant children were kept at government facilities in 2019, an increase of 42 percent from the previous year. The number of children in the United States who've been separated from their parents was greater than in any other country, according to the United Nations. Some of those children have now been reunited with their families and some have been deported. But approximately 4,000 were still in custody at the time the report was published.

A member of the Spokane Tribe, Teters grew up in Washington near the Spokane Indian Reservation. She sees a parallel between the detainments at the border and what Native people have experienced, given the nation's history of forcing tribes to relocate to reservation lands and prison camps. “As a Native person, this all feels familiar,” she says. “We don’t really see that border as real. We have relatives on both sides of the border. Native communities once walked freely between Canada, Mexico, and Central America. Those are our relatives and they look like us. That’s what’s so heartbreaking.”

Teters, who holds an honorary doctorate from Mitchell College in New London, Connecticut, is a former graduate of IAIA. She has worked in various capacities at the college for more than 20 years and is currently an associate professor in the studio arts department. She was named academic dean in 2014. Teters gained national attention in the early 1990s when she led protests against the use of racial stereotypes and caricatures of Native peoples as mascots for professional sports teams. Her efforts to end the practice was the subject of the award-winning documentary In Whose Honor? (1997).

Her performances as Our Lady of Survival are integral to the installation. She donned the Mylar regalia for a performance on Feb. 13 in the museum’s North Courtyard, which faces the gallery. The courtyard was filled with volunteers wearing the emergency blankets who, she says, represented the huddled masses.

The deliberate choice of an emergency blanket has several connotations. First, it underscores the critical nature of the crisis. Second, it establishes the figure of Our Lady as one of refuge from the elements. Third, it’s a reference to the idea of exposure to the elements, something faced by all immigrants who embark on long journeys by foot to reach the safety of new lands.

“She is commenting on the fact that, due to the man-made climate crisis, many of us may soon become refugees,” says Manuela Well-Off-Man, MoCNA’s chief curator. Studies back up the claim that climate change contributes to the refugee crisis. For instance, the Brookings Institution reported in July that climate crises affect migration by contributing to resource scarcity and the increased frequency of extreme weather events and disease outbreaks. The report states that the effects of climate change in parts of Central America have also impacted U.S. border stress.

“There’s something about how we’re handling this whole situation, as if refugees are not real people,” Teters says. “These are real people, and we’ve so dehumanized what’s happened to them. Of course, it reaches across the world. It’s all about feeling like we have to control what’s ours, like we don’t have enough to share. But these people have nothing.”