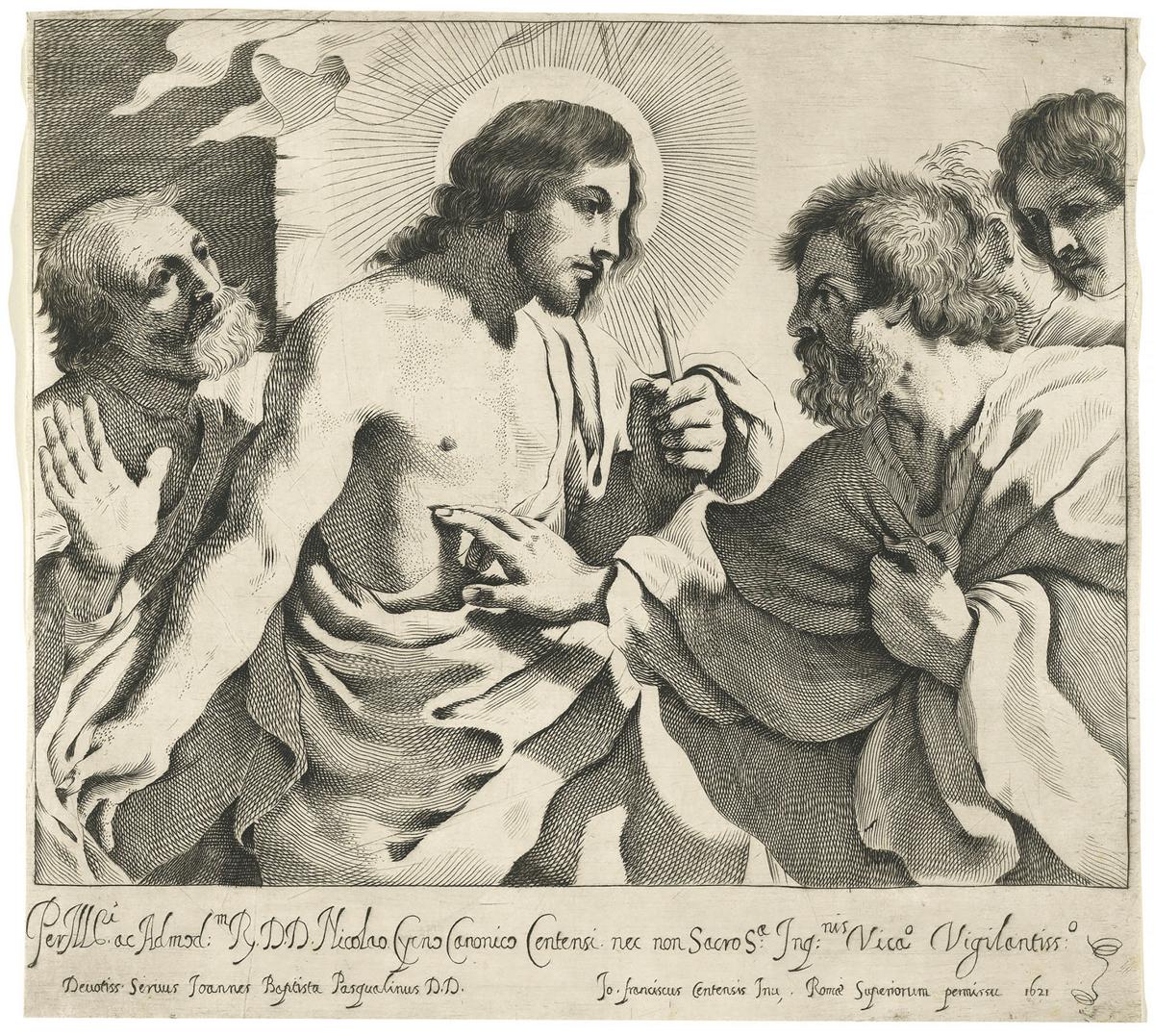 Giovanni Battista Pasqualini, The Incredulity of St. Thomas, after Guercino (1621), engraving, courtesy the Trustees of the British Museum 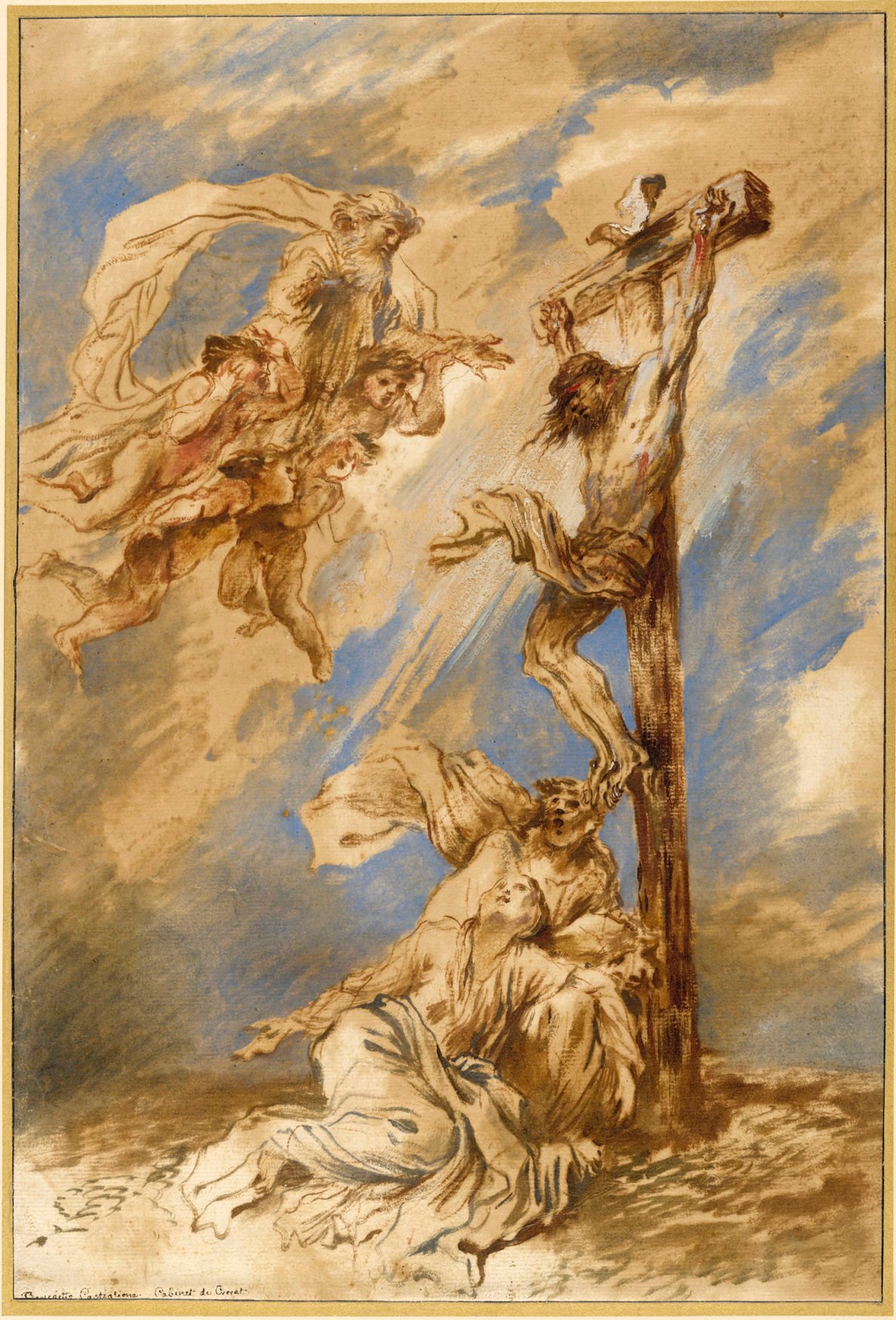 Castiglione, The Crucifixion (1631-1670), oil paint on paper, courtesy the Trustees of the British Museum 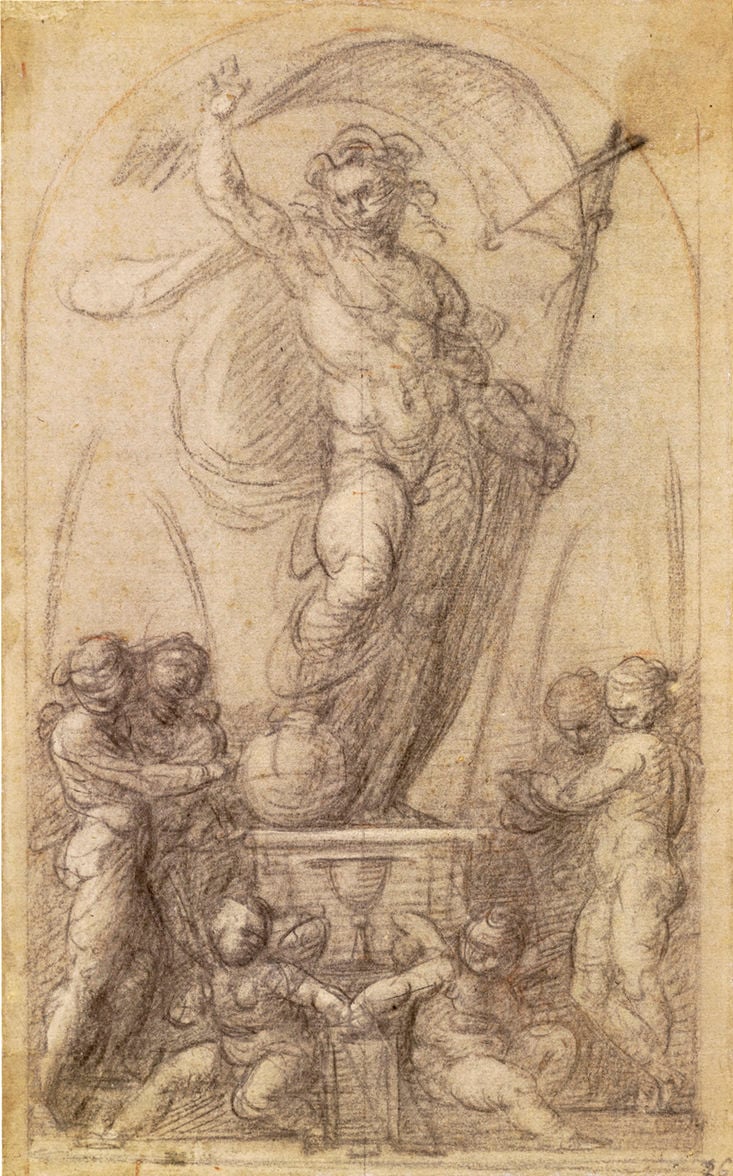 Fra Bartolomeo, Study for the Salvator Mundi (circa 1516), black chalk, traces of red chalk, heightened with white, on gray paper, courtesy the Trustees of the British Museum 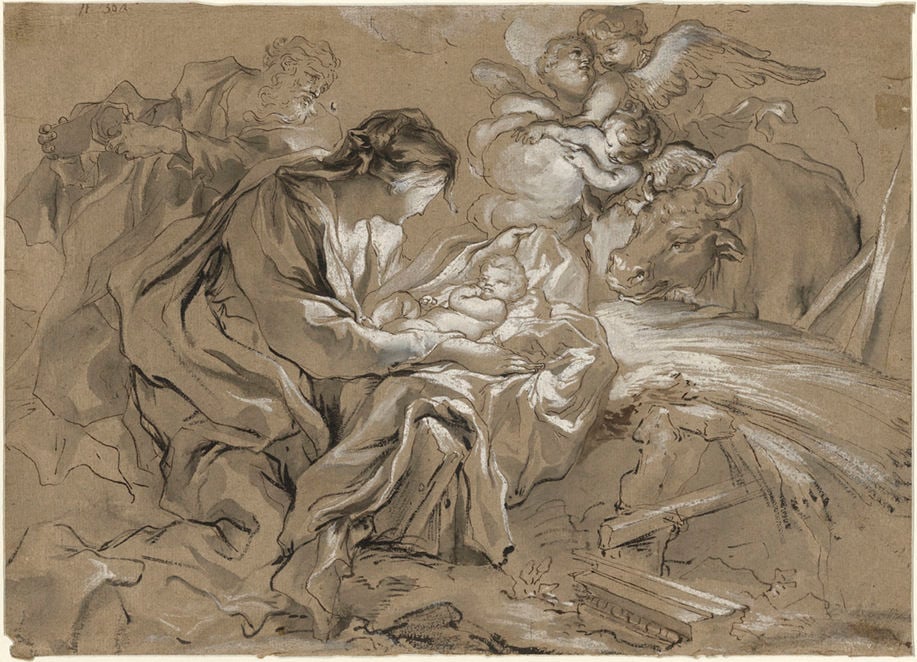 Giovanni Battista Pasqualini, The Incredulity of St. Thomas, after Guercino (1621), engraving, courtesy the Trustees of the British Museum

Castiglione, The Crucifixion (1631-1670), oil paint on paper, courtesy the Trustees of the British Museum

Fra Bartolomeo, Study for the Salvator Mundi (circa 1516), black chalk, traces of red chalk, heightened with white, on gray paper, courtesy the Trustees of the British Museum

A century, at least, passed between the time when Michelangelo Buonarroti depicted Christ on the cross between two crucified thieves in the drawing The Three Crosses (1521-1524) and when Giovanni Benedetto Castiglione made his own rendering of Christ’s crucifixion (mid 1600s). In Castiglione’s version, gone are the thieves and gone, too, is the multitude of grief-stricken disciples that Michelangelo depicted at the base of the cross.

Curator Hugo Chapman of the British Museum suggests in his essay, “The Life of Christ,” that Michelangelo’s drawing was possibly a study for a never-executed commission. In it, Christ looks upward to his right, at a departing angelic form (the only specific reference to divinity beyond the figure of Christ himself), and the Virgin faints at the base of the cross.

Castiglione, on the other hand, introduced something new to this oft-depicted, pivotal moment in the life of Christ. Amid Castiglione’s windswept scene of the harrowing drama, the figure of God, the Father, borne on a host of attending angels, gazes down upon the battered, bloody figure of his son. Chapman calls the artist’s addition a break with tradition that adds a “characteristic touch of heightened baroque drama.”

What stylistic changes were wrought in the interim between these works by two masters of Italian art? The dominant artistic movements transitioned from the Late Renaissance of the early 16th century through Mannerism to the Baroque. Over the course of these shifts, an emphasis on balance and proportion within a composition and imagery expressing ideal beauty gave way to asymmetry and exaggerated features, which in turn gave way to an emphasis on contrast, rich color, and scenes of awe-inspiring boldness and intensity.

The British Museum’s traveling exhibition of drawings and prints The birth, death and resurrection of Christ: from Michelangelo to Tiepolo runs through April 19 at the New Mexico Museum of Art. The exhibit examines the figure of Christ through artistic depictions of three critical moments in Christ’s life. The show includes 53 prints and drawings culled from the museum’s staggering collection of 50,000 drawings and 2 million prints.

The curators’ deep dive into these collections produced a group of works that have never been shown together before coming to America. The exhibit premiered in San Diego, where it was divided between the University of San Diego’s Hoehn Family Galleries and the Timken Museum of Art. Santa Fe is the second U.S. city to receive the works and the first to show all of the works in a single gallery.

A major focus of The birth, death, and resurrection of Christ is the ways in which Italian art evolved over 400 years. Throughout that time — from Parri Spinelli’s drawing The Risen Christ (1435-1445) to Mauro Gandolfi’s drawing The Adoration of the Shepherds (1829) — religious imagery was prime subject matter. As the progenitors of religious iconography, artists had a responsibility not to deviate too much from biblical canon. Don’t believe it? A trip to the great museums of Venice would convince you otherwise. The mind boggles at the sheer number of paintings of the Madonna and child.

Given the prevalence of such works, why did artists such as Michelangelo, Fra Bartolommeo, and Andrea del Sarto, achieve their renown? “For a start, artists had to work harder and harder to come up with an original way of looking at a subject,” says Sarah Vowles, the Hamish Swanston Curator of Italian and French Prints and Drawings at the British Museum, who co-curated the exhibition with Chapman, the museum’s Simon Sainsbury Keeper of Prints and Drawings. “They had to create works that would be different enough to stand out, without being perceived as scandalous or indecorous. Yet perhaps the most striking thing is how the basic compositions remain very much the same. Someone from the 15th century, if shown Giovanni Domenico Tiepolo’s 1760 Adoration of the Magi, would immediately be able to recognize the subject. The great challenge was how to maintain that instant recognition while adding a new way to focus the eye, to hint at the humble simplicity of the Holy Family, or to heighten the poignancy of Christ’s death on the cross. The reason these drawings are so astonishing is because they show the myriad ways in which artists managed to bring their personal stamp to subjects bound by very rigid parameters.”

Vowles says that prints, even as early as the 15th century, were a means of making art more accessible to those who couldn’t afford a painting. But this was not so true of drawings, the majority of which were working objects, not intended for public display. Most of the drawings in the exhibit were done as studies for paintings and offer an intriguing look into the artistic process. Michelangelo’s The Three Crosses, for instance, shows the artist working out compositional elements such as the placement of the figures, which are not finely detailed. It looks more like a sketch than a complete work.

Whether or not the artist ever intended to do a finished version, the patrimony of the Catholic Church was not uncommon, so the possibility exists that a member of the clergy would have been his intended recipient. “In the 15th century, the vast majority of artistic commissions were of a religious nature,” Vowles says. “Patrons were often either religious institutions or wealthy people commissioning works for their family chapels or private devotion.”

The depiction of religious imagery often meant adhering to a set of conventional standards. In the case of the artists of the 16th century, that meant staying within the guidelines set forth by the Council of Trent, an ecumenical council of the Catholic Church whose decrees had a major impact on what could be shown in religious art. While the council’s primary objective was to condemn the doctrines of Protestantism and clarify the doctrines of Catholicism, artists were compelled to create works that clearly and simply expressed the pedagogical aspects of religious imagery. “The artists included in the exhibition generally kept their depictions of these subjects uncontroversial,” Vowles says. “An artist who courted controversy in religious pictures tended to lose work and would no longer be able to make a living.”

From our 21st-century standpoint, it’s easy to decry the effects that the decrees of the Council of Trent may have had on creative expression. But we shouldn’t be so quick to judge. The council’s objective was to help make art understandable to a largely uneducated public. They discouraged the ambiguity of Mannerist works. That had a direct impact on the rise of the Baroque, which dramatized events in such a way that there could be no question about what was being depicted and why. An example of this shown in the exhibit is Gregorio de Ferrari’s drawing The Nativity (1675), in which the Christ child, bathed in a divine light, is attended by a host of angels. Another fine example is Giovanni Battista Pasqualini’s 1621 engraving The Incredulity of St. Thomas, in which the disbelieving saint can only be appeased by touching the radiant figure of Christ, who stands before him, awash in the glow of his divine halo.

The exhibition is aimed at a general audience, despite the religious themes of the works on view. Because of its narrow frame of reference — dealing with a specific figure, and just three moments of his life — it may be easier to appreciate the subtle and not-so-subtle innovations in artistic technique and style represented here. Certainly, many of these artists dealt with secular subject matter in their careers as well, but religious subjects are unavoidable when looking at Italian art from this period.

“In the 16th century, with increasing discoveries of antique sculpture, classical mythology became more popular, allowing artists to experiment with subjects like the nude body, which were rarely appropriate in religious subjects,” Vowles says. “In the 17th and 18th centuries, secular themes continued to widen their appeal, but religious art remained vitally important in Italian culture right up until the end of the period covered here.” ◀

The birth, death and resurrection of Christ: from Michelangelo to Tiepolo

By admission ($12 general; $7 for NM residents with ID; free for children 16 and under)