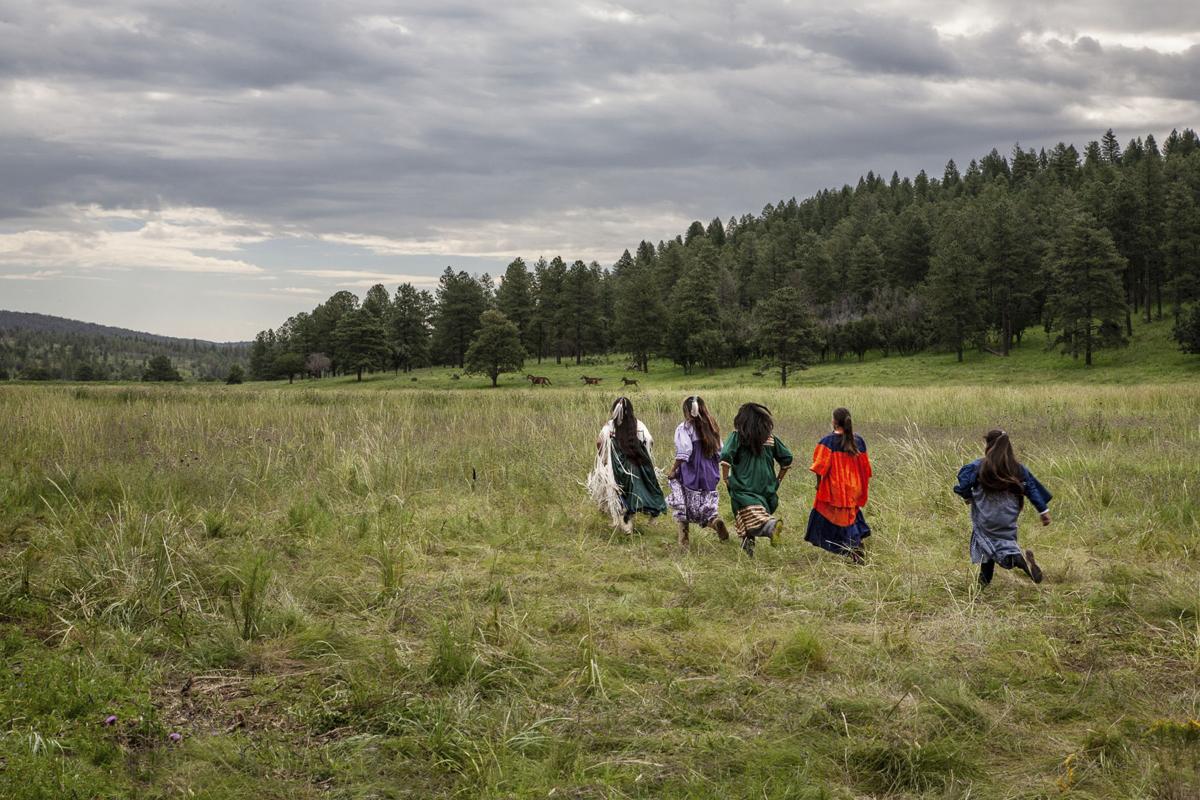 Malia Enjady and her attendants run toward the east on the final day of the ceremony in 2014, photo Jan Butchofsky 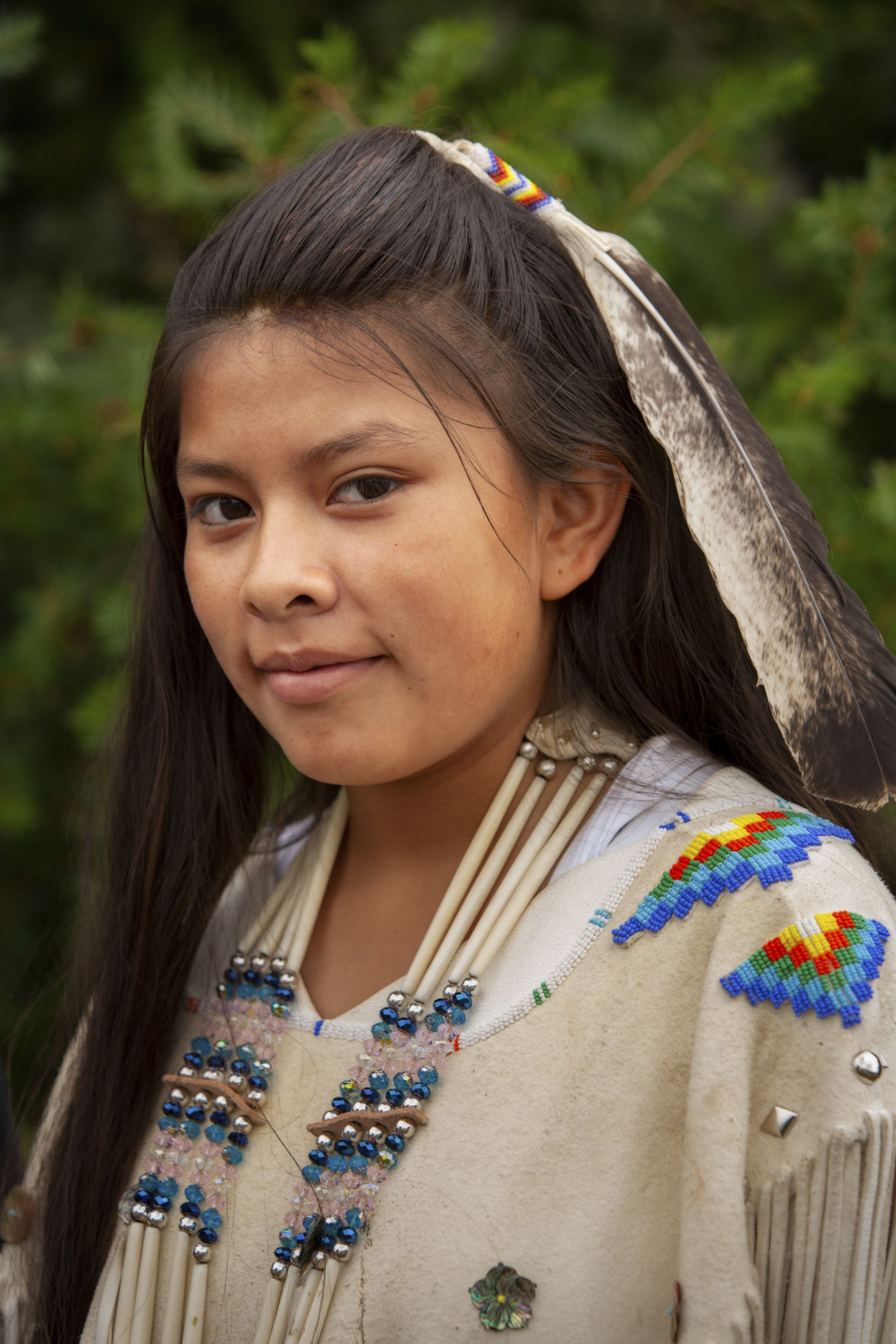 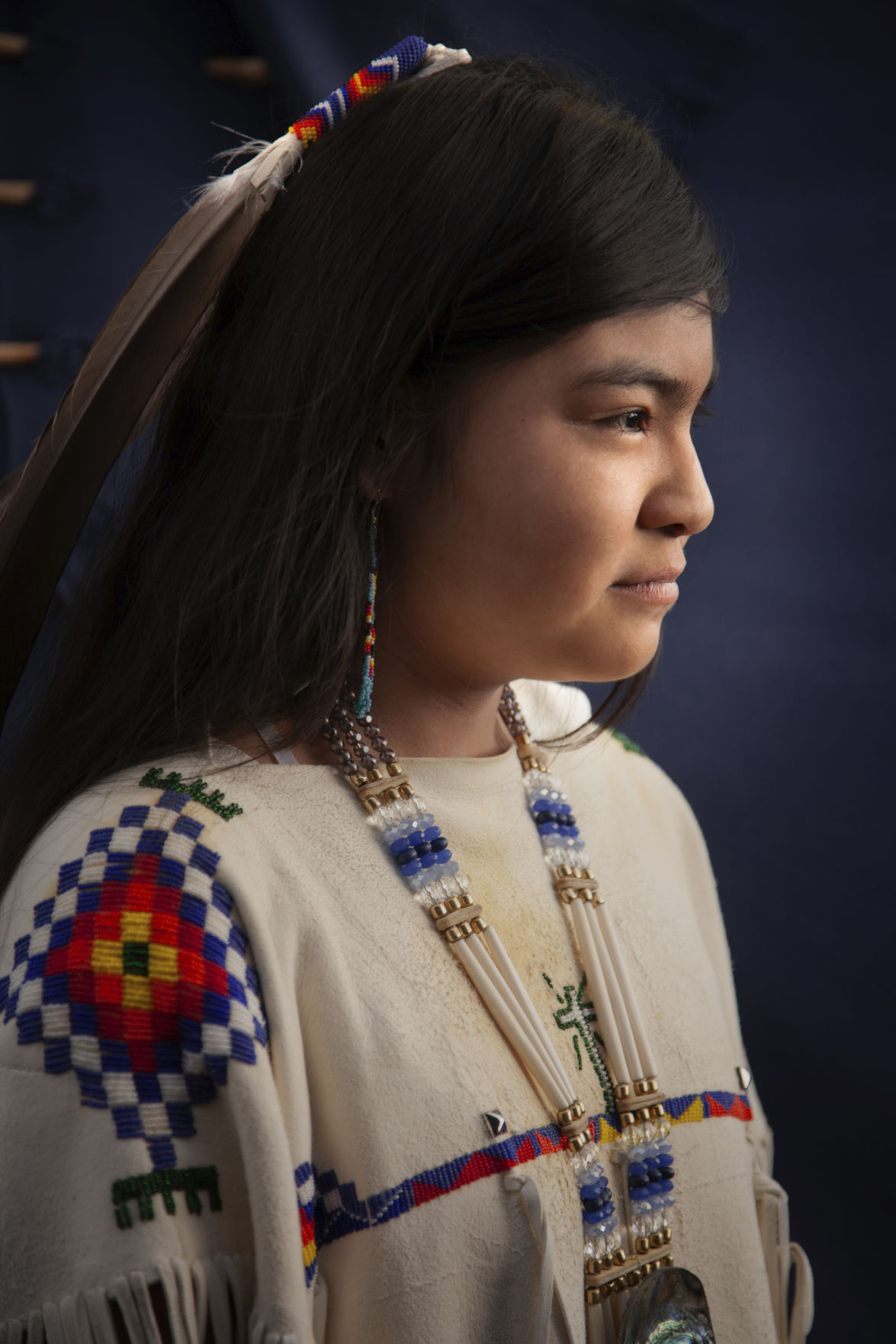 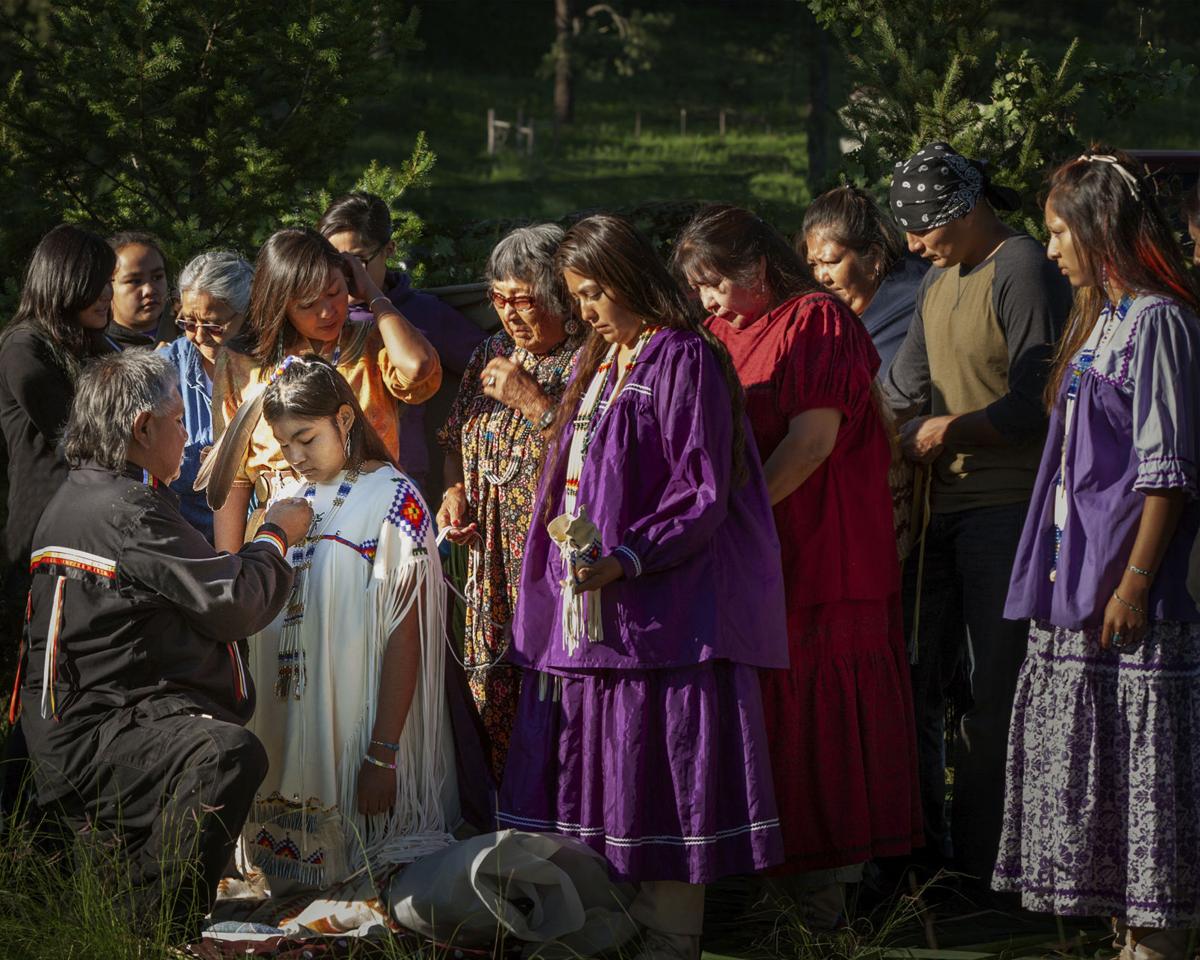 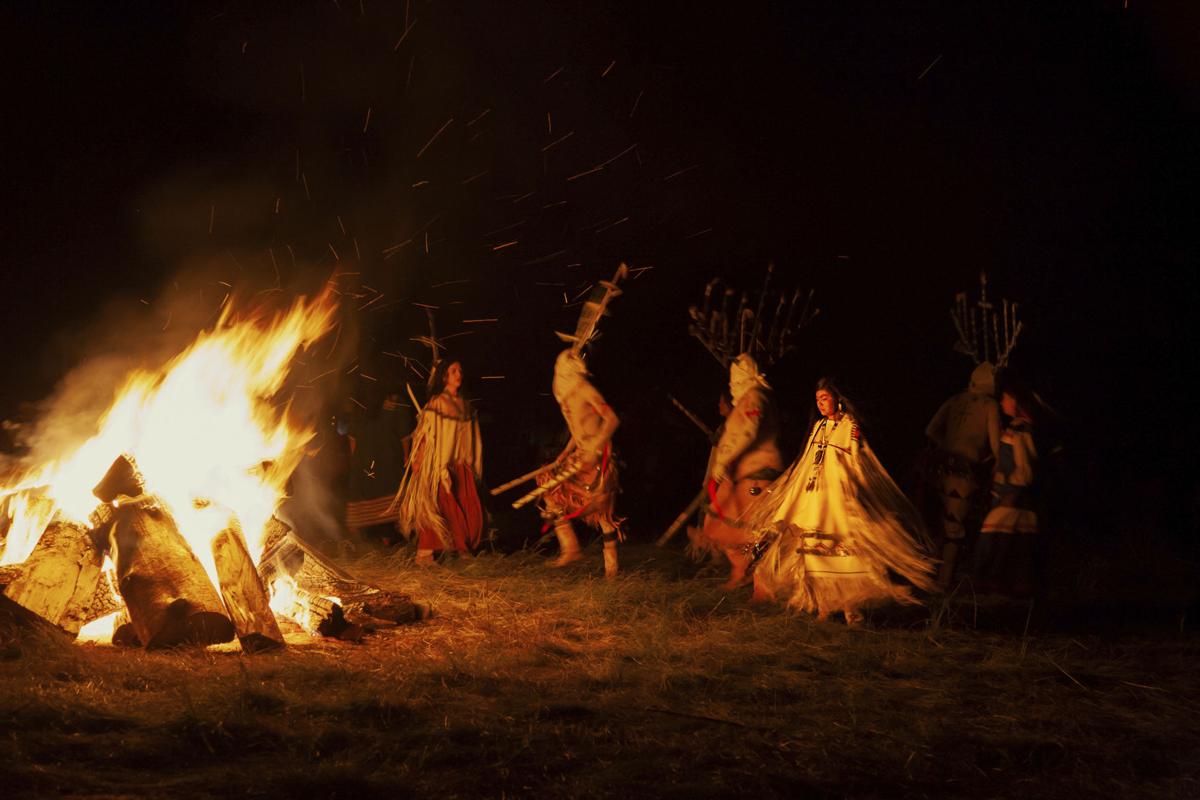 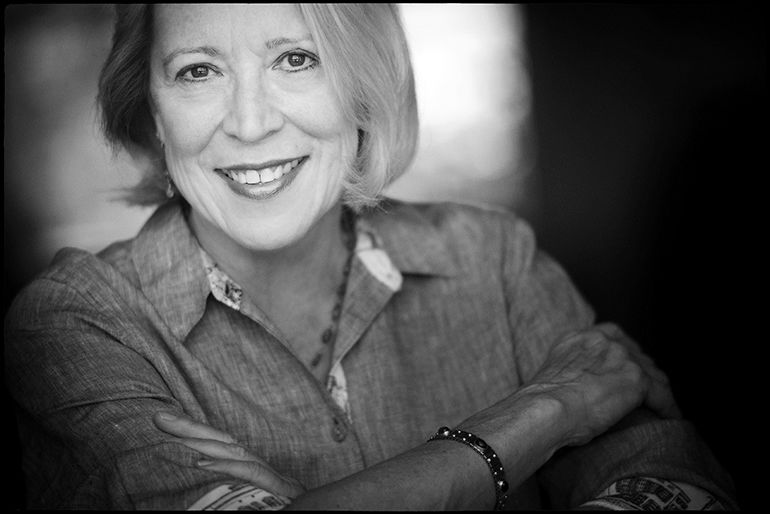 Malia Enjady and her attendants run toward the east on the final day of the ceremony in 2014, photo Jan Butchofsky

Photographer Jan Butchofsky believes that no one person among the Mescalero Apache knows every aspect of what’s involved in the 12-day coming-of-age ceremony that serves as a girl’s initiation into womanhood. But the entire community participates in one way or another, preparing for it as much as a year in advance.

The exhibition Ceremony: Coming of Age | Mescalero Apache Maidens, a compelling series of Butchofsky’s color photographs documenting the rites, came out of sessions that took place over two time periods. The first was in the summer of 2010 when she photographed the rites for the family of Ashlee Belin, who was 16 at the time, at the Mescalero Apache ceremonial grounds in southern New Mexico. The second was in 2014, when, over a period of months, Butchofsky photographed the preparations leading up to the event, then shot the ceremony for the family of Malia Enjady, who was 13, on private land on the Mescalero Apache Reservation.

“I’ve always been very interested in women’s’ approach to ritual and ceremony in all religions and cultures,” says Butchofsky, who connected with Rainey Enjady, Malia’s mother and Ashlee’s aunt, through her bookkeeper, a mutual friend of the family who was familiar with Butchofsky’s interests. Enjady agreed to let Butchofsky photograph Ashlee’s coming-of-age ceremony, much of which is typically private. “As much as I was witness to these ceremonies and the closeness I have to my friends in the tribe, I have never approached this project as an authority. My choice, when I was given permission to exhibit the photographs, was to show the visual imagery and let the visual imagery speak for itself. I can tell a story about what’s happening, but I don’t claim to know all the nuances.”

Butchofsky, who lives in Santa Fe, worked as a freelance travel photographer for the past 28 years, specializing in documenting ethnic cultures for photo essays published in print media and working for stock photo agencies. “At this stage of my life, I’m more interested in delving deeper into spiritual subjects and that’s the focus of my work today,” says the 68-year-old photographer.

Although Edition One Gallery is showing only the color photographs (extended through April 18), panels showing a series of black-and-white images detail some of the extensive preparations. Pollen is gathered from water plants, and herbs are collected. Teepee poles have to be cut and the canvases sewn. Cattle are raised and slaughtered for the feast. Food, goods, and gifts for the participants are gathered and stored. Arbors are built and the firewood is cut.

“The dress for the maiden is often a heritage piece but sometimes they’re harvested,” Butchofsky says. “The father will slaughter a deer. The hide is tanned. The beadwork and cowry shells are attached. Moccasins have to be made.”

The 12 days start with the raising and blessing of the large teepee. The maiden blesses the community, and the dancers and singers gather. The last four days are the most crucial, a test of physical endurance for the maiden who runs each day to display her strength, dances at night, and is otherwise the subject of constant attention from her family and the medicine women and men of the tribe.

One fascinating image shows Ashlee sitting in a purple chair in an open field, among a group of Apache crown dancers. The dancers faces are hidden beneath painted buckskin hoods, their heads topped by elaborate wooden headdresses, carved and painted with geometric designs. They hold their ritual implements as they perform their blessings, surrounding the child.

“This is a very unusual photograph because one never sees the crown dancers by light of day,” Butchofsky says. “Before they can do dances at a ceremony they must bless the maiden and the maiden must bless them. Just before sundown, they come out and the maiden is brought to them. Her eyes are down, her demeanor is calm and peaceful. She’s not to giggle or laugh. It’s a solemn occasion and a learning experience. So she’s to hold her composure throughout that time.”

As much as Butchofsky’s photographs are a record for the family, they are a significant document of events nontribal members rarely see, particularly nighttime photographs of dancers encircling bonfires and other aspects of the rituals that take place after sunset. Part of Ashlee’s rite at the ceremonial grounds was open to the public but, in such instances, Butchofsky says, the public can’t come before sunrise and must leave by sundown. Photographs are not permitted unless requested by the family, as in her own case.

On the maiden’s final night she will dance to a series of 40 songs inside the big teepee, surrounded by her attendant maidens (other young girls from the tribe), her medicine woman, her mother, and her aunts. “They’re there with her to help her and guide her.” Butchofsky says. “She’s never left alone during the course of the ceremony. Much of that instruction is super private.” But Butchofsky was given permission by the medicine man, Sherman Benedict Blake Jr., to photograph Malia inside the teepee during the night. Her images, which show Malia in closeup, are respectful and reveal no telling details, only an abstract visual impression of a dancing form, the young woman’s deerskin dress swaying to her movements. With one exception, those images were not included in the exhibit out of respect for Blake, who died in 2019. The exhibition is dedicated to his memory with a commemoration on a text panel that bears a quote from the medicine man: “Never pray for yourself. Pray for the water, pray for the land, pray for your neighbor.”

At the end of the arduous night of dancing, the maiden is covered in clay from the sacred White Mountain to symbolize the mythic figure White Painted Woman, who represents the triumph of good over evil and embodies ideals of goodness and virtue, which are to be imparted to the young initiate.

Before the ceremony is over, the maiden, who has been running greater and greater distances on each of the last four days, faces one more vigorous run. Exhausted from the night-long marathon of dancing inside the teepee, this is the final test of her resilience and strength. In the photograph capturing that moment, Malia and four attendant maidens dart across an open field, their run echoed by some racing horses far in the distance. “What was going on in the background, off-camera, was women yelling, ‘Run, Malia, run. You’re a strong woman,’” Butchofsky says. “Then you hear the men: ‘Run, Malia, run. You’re a strong woman.’ I like to say she runs into her future.”

A portrait of Ashlee, who is now in her 20s with a child of her own, captures her in profile, silhouetted against the glowing flames of a bonfire. Her gaze is seemingly directed inward and her expression is stoic, capturing a sense of the momentous nature of the spiritual event. “I asked her, ‘What is it that you felt you received from having had this ceremony?’” Butchofsky says. “She was looking at this image, and she said, ‘I’ve become a better daughter. I’ve become a better mother. I’ve become a better coworker and a better neighbor.’” ◀

The gallery is closed, but Ceremony is available on the website through April 18, editiononegallery.com