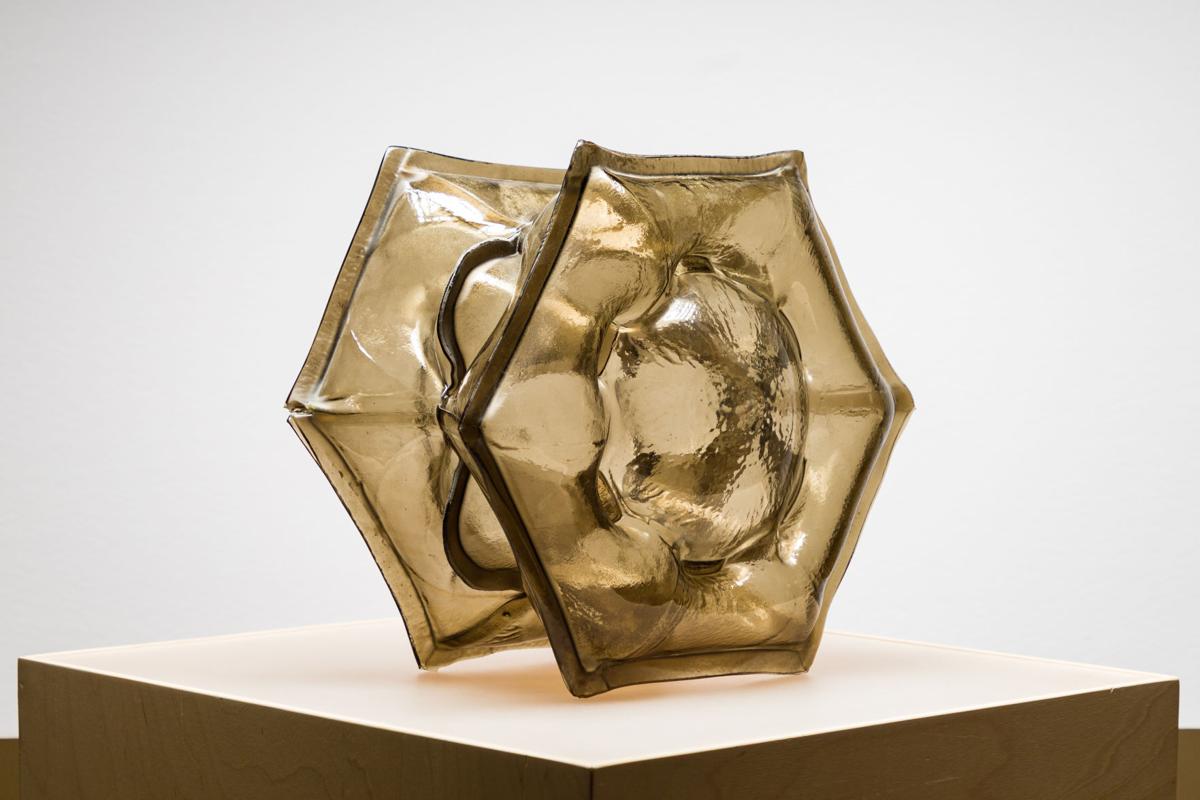 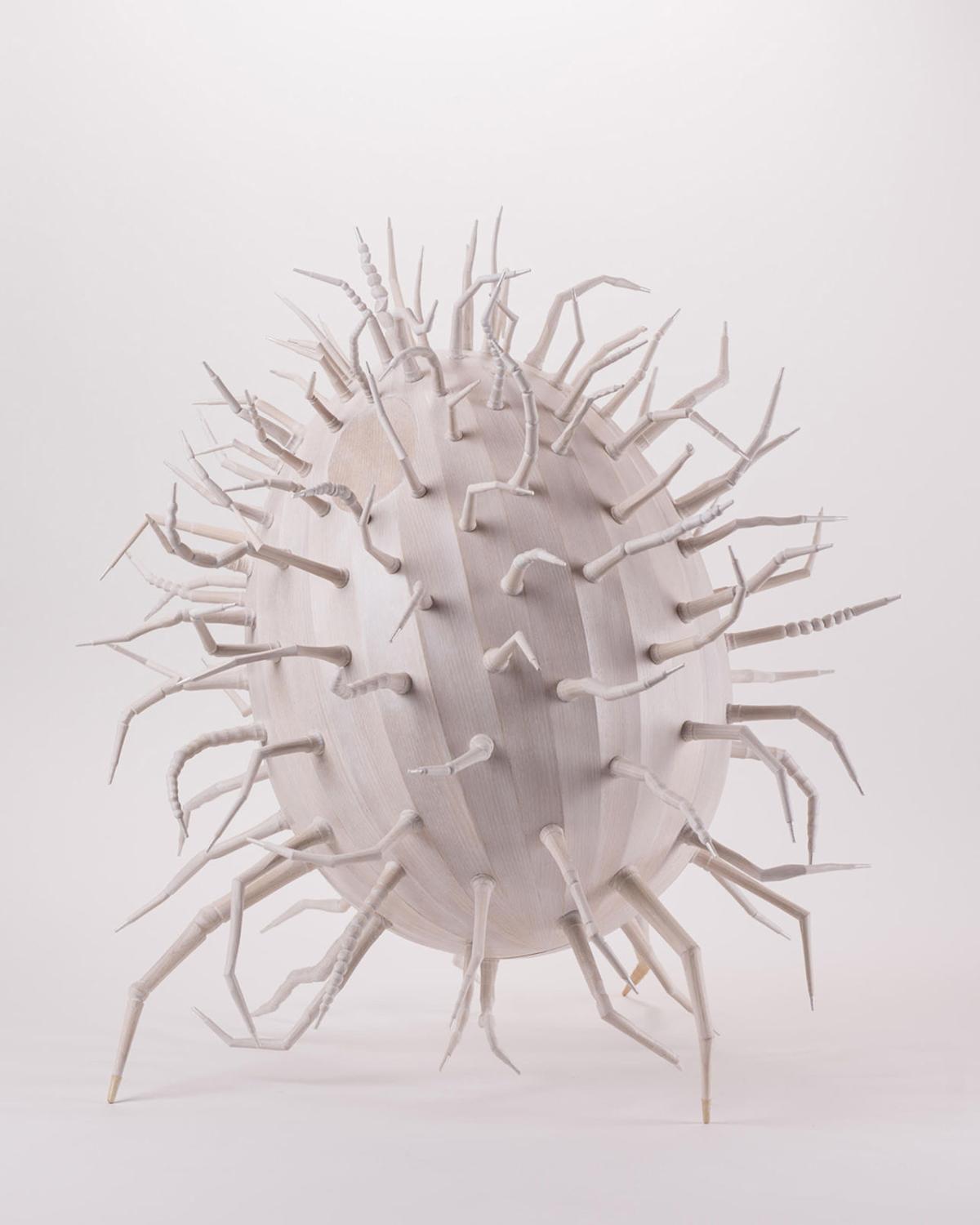 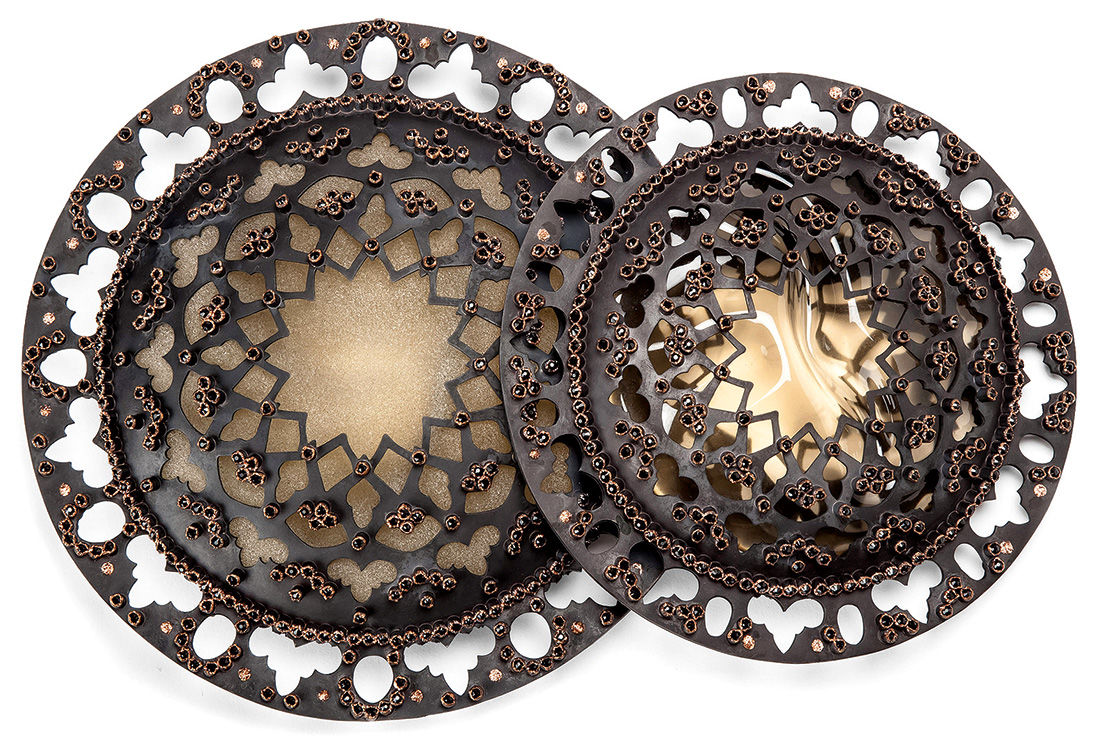 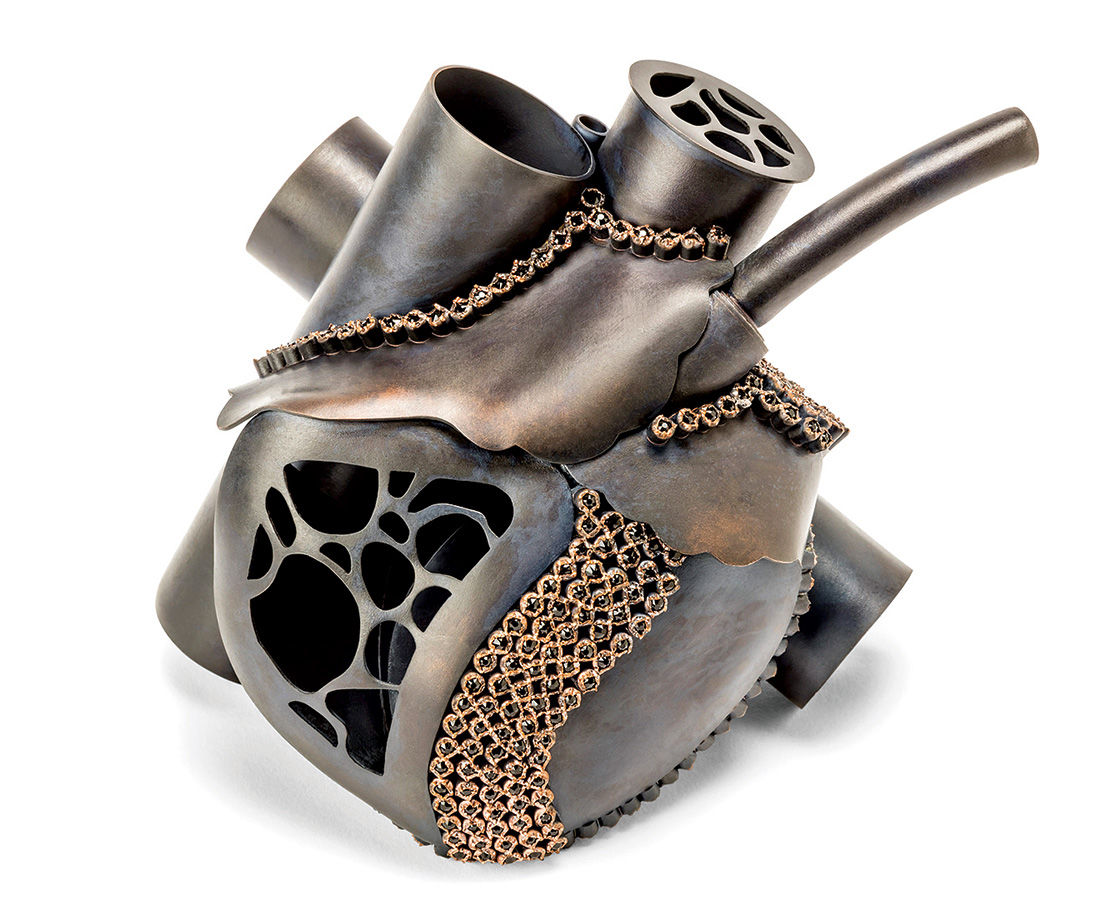 Swarovski crystal is a popular item among bead workers and other craft artists. But it doesn’t normally adorn sculpture, let alone a replacement heart valve or a breast implant for someone who’s undergone a full mastectomy. Yet, artist Holland Houdek uses Swarovski crystals to decorate copper sculptures that are modeled on such medical devices. These sculptures of implants and cardiovascular apparatuses, on view in the exhibit Objects: Redux — 50 Years of Craft Evolution, might get you thinking about the aesthetic qualities of medical instruments, but — bead-blasted to a lustrous patina and encrusted with jewels — they look like items of luxury. What does that say about the exorbitant cost of U.S. health care, which could be on a par with the most lavish objects of art?

Objects: Redux is a showcase for works that transcend craft’s association with functional objects, hobbies, and home decor, without negating the humble and commonplace nature of the materials. Craft is associated with the amateur maker and hasn’t been treated seriously by fine art critics, on the whole. But that’s changing, and this show reminds us why.

The show pays homage to the seminal exhibition Objects: USA, which opened in 1969 at the Smithsonian American Art Museum in Washington. Organized as a traveling exhibition, Objects: USA helped establish contemporary craft in the arena of the fine arts. Up to that time, craft wasn’t considered worthy for most major art museums and galleries. The exhibit was an influential survey that built off of the American Studio Craft Movement, which rose up in the years following World War II. The artists of the Studio Craft Movement explored nontraditional materials and techniques or worked with traditional materials — like ceramics, glass, metal, silver, wood, and fiber — in innovative ways.

The influence of that groundbreaking exhibit has been furthered in recent years by shows at the Houston Center for Contemporary Craft (Objects: Redux — How 50 Years Made Craft Contemporary) and the Racine Art Museum in Wisconsin (Objects Redux: Clay, Glass, and Metal, 1960-1985). The latter was the first in a series of commemorative exhibitions.

The Form & Concept exhibit shows how the 1969 event set a precedent, and how craft has only grown as a high-caliber, conceptually based force in contemporary art. The show’s curator, William Dunn, continues to explore the line between fine art and craft in the roughly 70 works on view — some of them recent pieces made by 16 artists from the original Objects: USA exhibition, including David Gilhooly, Charles Loloma, and J. Fred Woell. Twenty-three artists from New Mexico and the Southwest are also involved, including Wesley Anderegg, Sonya Clark, Raven Halfmoon, and Matthew Szösz. The labels for each work made by a member of the original show are marked with a small red hand in the upper left corner, which is helpful for identifying who’s who.

Happily, the appearance of newer work prevents the exhibit from being a rehash of the Smithsonian show. For instance, the gallery is showing four works by Woell, most of them made in the 21st century. These are found-object assemblages. In Search for Neverland Brooch (2005), the artist sets a compass, a vintage military button, and a small portrait of John F. Kennedy inside an empty sardine tin. Woell draws a parallel between Peter Pan creator J.M. Barrie’s fictional island of Neverland and JFK’s presidency (often referred to as Camelot, the mythical abode of King Arthur), which represents an idealized or longed-for utopia.

A free screening of the 2014 documentary short J. Fred Woell: An American Vision takes place at 2 p.m. on Saturday, March 14, followed by a roundtable discussion with metalsmith and jeweler Robert Ebendorf, whose work appears in the show.

You don’t walk into Objects: Redux expecting to see something you’ve never really seen before, or have never seen in a fine art gallery context. And that makes its surprises the sweeter.

Take Lynda Watson’s Aerial View (1974), a wax-cast sterling silver necklace, that, upon close inspection, reveals that the many raised bumps and folds of its surface actually make up a topographical map. Watson was one of the original exhibitors in Objects: USA. Her work is significant because she takes a traditional jewelry medium and transforms it into a wearable bas-relief with a descriptive landscape element. Rather than merely being fashionable, it has a narrative component — the map is based on her hometown, according to the text label.

Also fascinating is a series of square compositions, arranged in a grid and each one mounted on a diagonal, called Drawings (2019) by artist Rowland Ricketts. These look like photographs. Specifically, they look like cyanotypes, camera-less images that are contact-printed on light-sensitive paper when it is exposed to UV light. But they are, in fact, made using natural pigments, such as crushed indigo leaves, on felt. Several of them show a circular object over a horizon line, like a full moon in the night sky. Watson and Ricketts exemplify the innovative use of traditional craft mediums.

The variable nature of their work and materials makes for quite a visual mishmash, like something you might expect to see in a student art show, only with better quality work. To Dunn’s credit, he arranged the potpourri of ceramics, blown glass, textiles, jewelry, and other mediums into an effecting visual display — especially on the second floor, where works by different artists strike up a compelling dialogue. For instance, Jennifer Ling Datchuk’s Loving Care, a series of three potted ferns suspended from the ceiling by cradles of fake red hair, provides a homey, domestic feel, set against a backdrop of two indigo- and madder-dyed framed works in linen by Ricketts (Unbound — Series 1 No. 4 and Unbound — Series 1 No. 5, both made between 2016 and 2018). It’s a reminder that, outside of the gallery context, most of us live with crafts in some form or another and are used to seeing them in a home setting, whether their purpose is decorative or utilitarian. It looks like you’ve walked onto someone’s living room.

Some of the work is in the gallery’s first-floor atrium, in sight of unrelated solo exhibitions. You might wander away from Objects: Redux and not realize, at first, that you’ve left it. The vast majority of works are located in the second-floor gallery, separate from the atrium. But two solo exhibits seem calculated to keep you squarely moored at the intersection of fine art and craft as you make your way from the atrium to the second floor. They include a series of daguerreotypes into which artist Jodi Colella embroidered intricate designs that obscure the faces of the women they depict, and Jacquelyn Royal’s The New Police, a show of needlepoint compositions of detailed urban landscapes that line the walls of the glass catwalk above the gallery’s main floor. These are fitting adjuncts, if you choose to see them that way, to Objects: Redux.

Form & Concept’s stated mission is to develop a conversation around the areas where fine art, craft, and design converge. With Objects: Redux and the other shows on view, it gives this dialogue free rein and further shatters the distinctions between high art and low art, a process begun a half century ago.