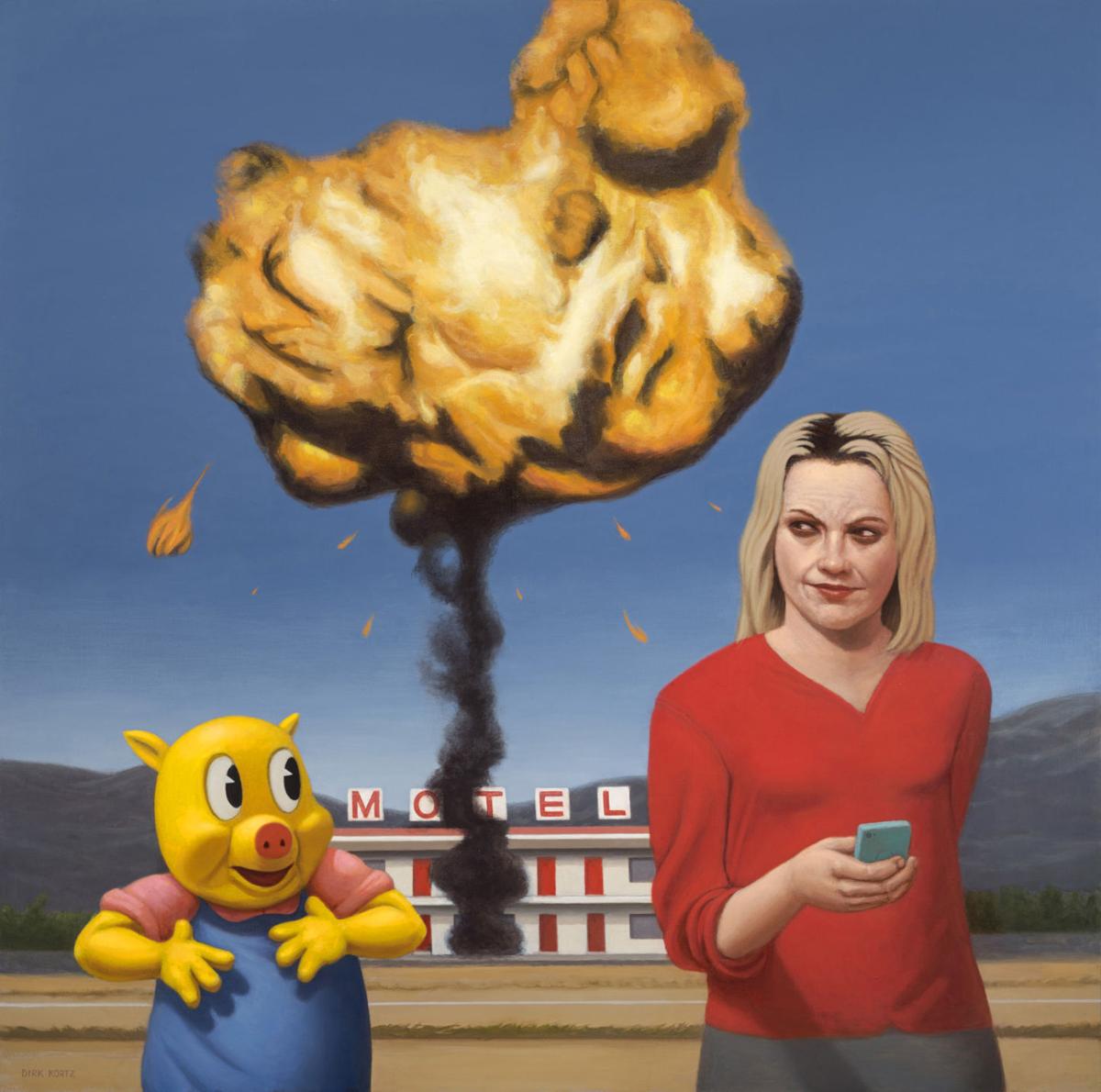 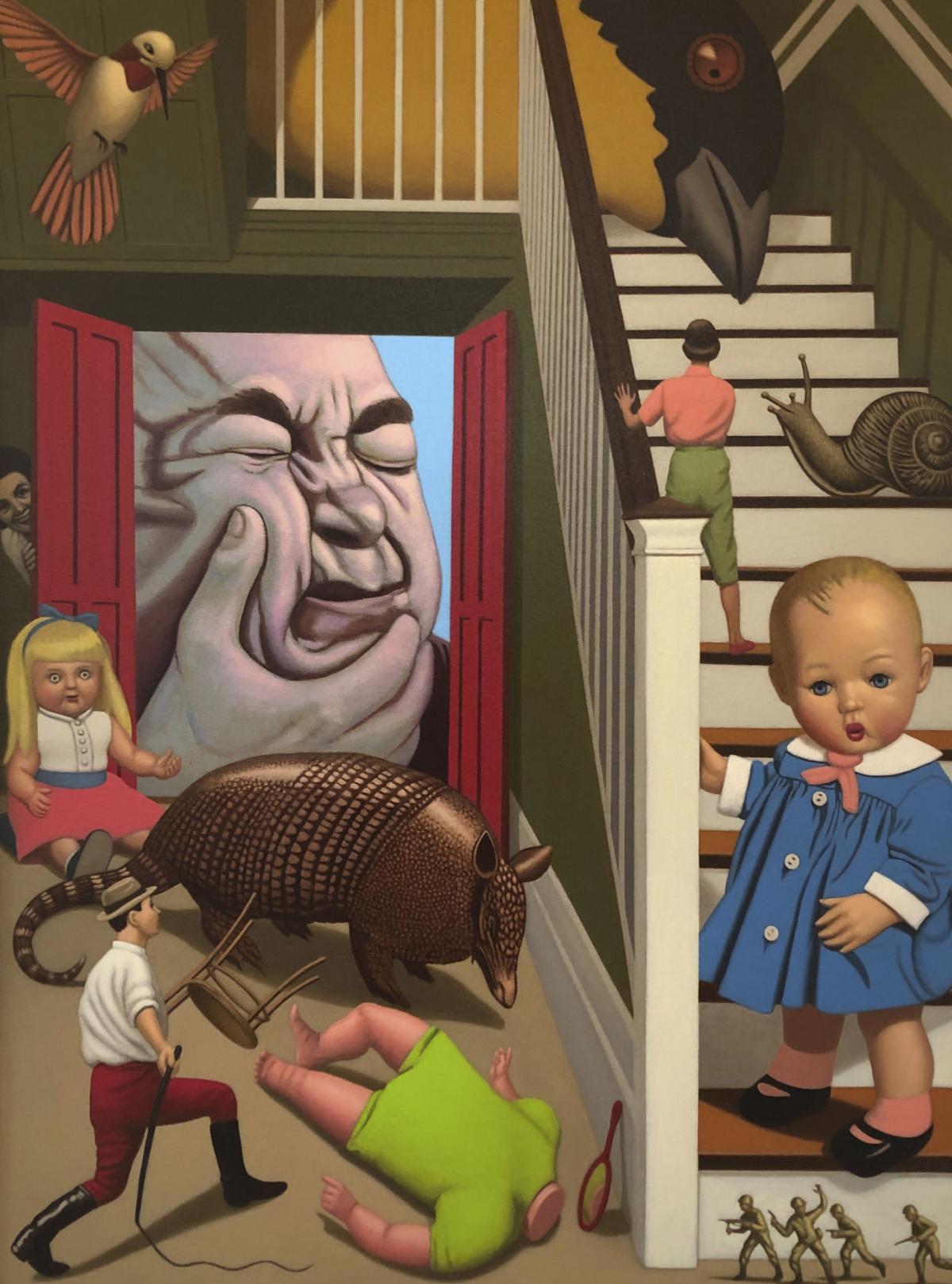 You could easily imagine a narrative unfolding when you look at Dirk Kortz’s recent painting Jane Awoke Early, Left Dick Sleeping Peacefully and Departed With Her New Friend (2019). In a red top and grey skirt, a female figure, cell phone in hand, wanders away from a motel in a desert landscape. Her friend, a cartoon pig in a pink shirt and blue apron, seems to recoil at her withering glance. But the cartoon pig and a great conflagration erupting from the motel behind it make the title ironic and absurd. Maybe Dick is sleeping peacefully because he’s dead, the victim of a murderous lover, calmly walking away from a blaze she started. Or maybe Jane is just lucky, having narrowly escaped an explosion she had nothing to do with.

Don’t ask Kortz for an explanation. If there is one, it’s in the mind of the viewer. “I’m usually surprised by what comes out, but I don’t have a lot to say about it,” he says about his compositions, which he develops as a kind of free association. “I’m not a theorist. There’s not an underlying message that I’m trying to get across. I’m trying to create a visual language, and it’s very hard to talk about a visual language.”

Kortz’s solo exhibition of paintings is available online at KEEP Contemporary (142 Lincoln Ave., Suite 102). The works comprise his late-career paintings in which he doesn’t like to be bound by narratives or limitations of style. Any one of a number of his compositions could have aspects of realism blended with elements rendered in a flat pop aesthetic, illustrations that seem culled from an antique children’s story, and even imagery done in the manner of any one of a number of historical art movements. His work is a pastiche. For instance, in Serious Business (2019), which is divided into two panels, a Mexican wrestler floats through the sky in the bottom half. In the panel above him, a woman who looks like she’s right out of a Roy Lichtenstein comic-type painting talks on her phone. Opposite her is a man in a suit and tie wearing a gas mask. Between them, a toy robot shares a desert landscape with dinosaurs and an Indian on horseback. A red planet Earth floats in the sky.

Serious Business isn’t the only painting in which Kortz divides a single composition into two or more panels. In fact, a series of works from 2014, Persistence of Vision, took it to an extreme. One of the paintings from the series, at only 18 by 27 inches, had over a hundred panels, each one bearing a different visual element. Back then, Kortz told Pasatiempo that this manner of working developed out of a desire to create paintings that were inherently meaningless. But he realized in composing them that the mind makes associations, even when you’re consciously trying not to. But he still won’t discuss them in terms of what they could mean. “Basically, the associations are kind of what you bring to it,” he says. “I’m not trying to make specific associations for myself. And even if I was, I don’t think they’d mean much to anyone else. I try to keep it as visual as I can.”

His newer work has far fewer panels. “I’m not interested in what I started out in, which was to do a kind of comic strip or grid,” he says. “I tried to pull them together by using more traditional methods, like color, connecting things so the whole painting held together because there was some kind of visual continuity going on in it. But it still wasn’t a narrative. It wasn’t something you could read from beginning to end.”

Kortz, who’s in his 70s, didn’t start out making compositions that were conflations of disparate imagery and artistic styles. For a time, the artist, who studied filmmaking and creative writing at San Francisco State University in the 1960s, strived for realism. “For a long time, I was doing the best I could to paint classically,” says Kortz, who felt bogged down by the limitations of classical composition and working in a particular style. Persistence of Vision, in fact, developed out of a nighttime practice that he began just for fun. “The actual act of painting is fun, but there’s a certain amount of discipline and mental energy that goes on all day. You flatten out after a while. After you’ve been painting for 10 or 12 hours, you’d just be exhausted. I’d want to keep painting, but I knew that I wasn’t going to be painting that well and I just felt like fooling around. So I’d make a painting in one square just to amuse myself, really. Then I’d do another.”

It’s not that Kortz paints a complete work in one style and then tries something different for the next one (although he might do that when a single painting is composed of several square panels) but that he combines them, sort of like a collage. “I didn’t want style to determine what I was going to do,” he says. “I didn’t want perspective. I didn’t want scale. There’s no mandate. It’s very freeing to not have to worry about those things and just paint.”

But motifs do reoccur throughout his recent work. Many of his paintings have one or more birds in them, for instance. “It didn’t occur to me as something I was trying to say. It’s just that the birds have always been there. That doesn’t surprise me since I’m a sometime bird-watcher. I do have a life list [a record of bird species sighted over time] and I do have binoculars.” Kortz also grew up on a farm in New Jersey where he tended a flock of 80 pigeons.

Another recognizable component of his work is their nostalgic, retro aspect: hairstyles, fashions, and an illustrative quality that seem straight out of the 1940s, ’50s, and ’60s. “I think that retro quality is fairly common, particularly for people my age and maybe a little older,” he says. “The times we grew up in — and this is probably true for everybody — there are some very indelible memories and experiences from those times.”

But such imagery, like the elements of mid-century Americana that show up time and again, are open-ended and don’t relate to specific events in his own life in any discernible way. He doesn’t intend for his work to be autobiographical. “I don’t try to dig too deep into my personal stuff because I’m not that interested in talking about myself,” he says. “I hear a lot of artists talking about their work and it actually diminishes it for me. I like to look at it and get what it is with my eyes.” ◀

View the work online at keepcontemporary.com