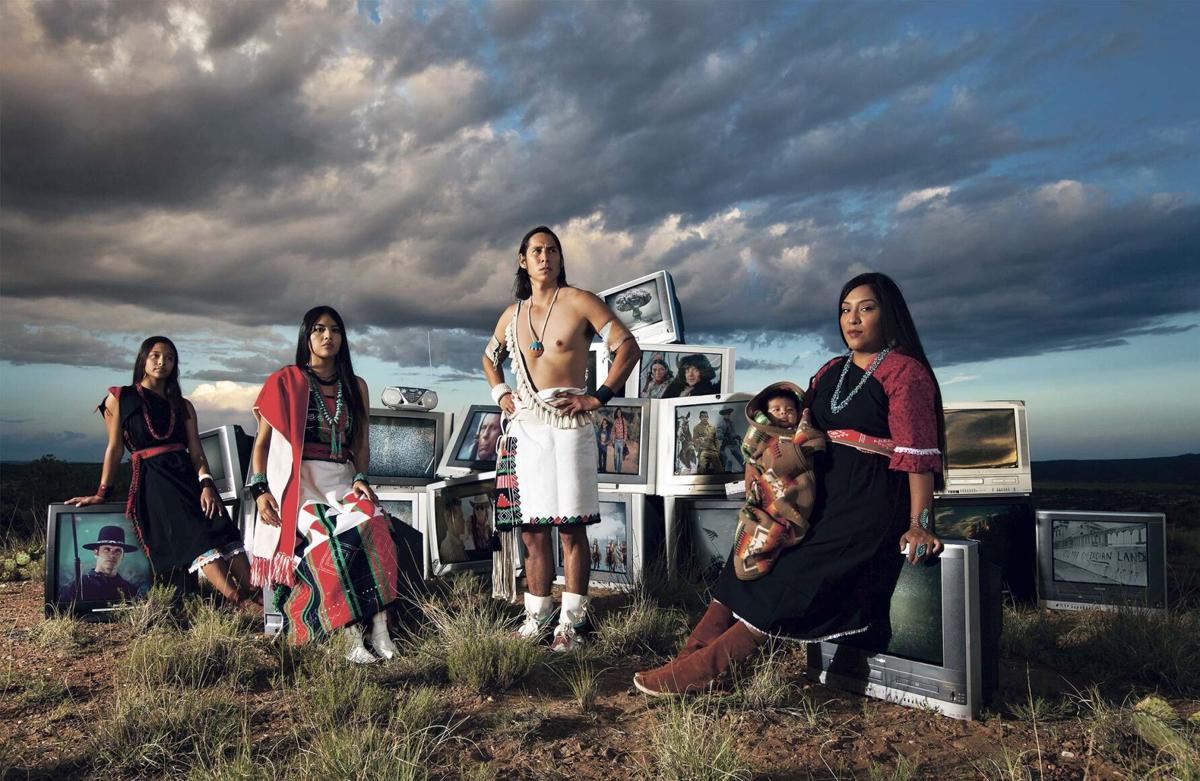 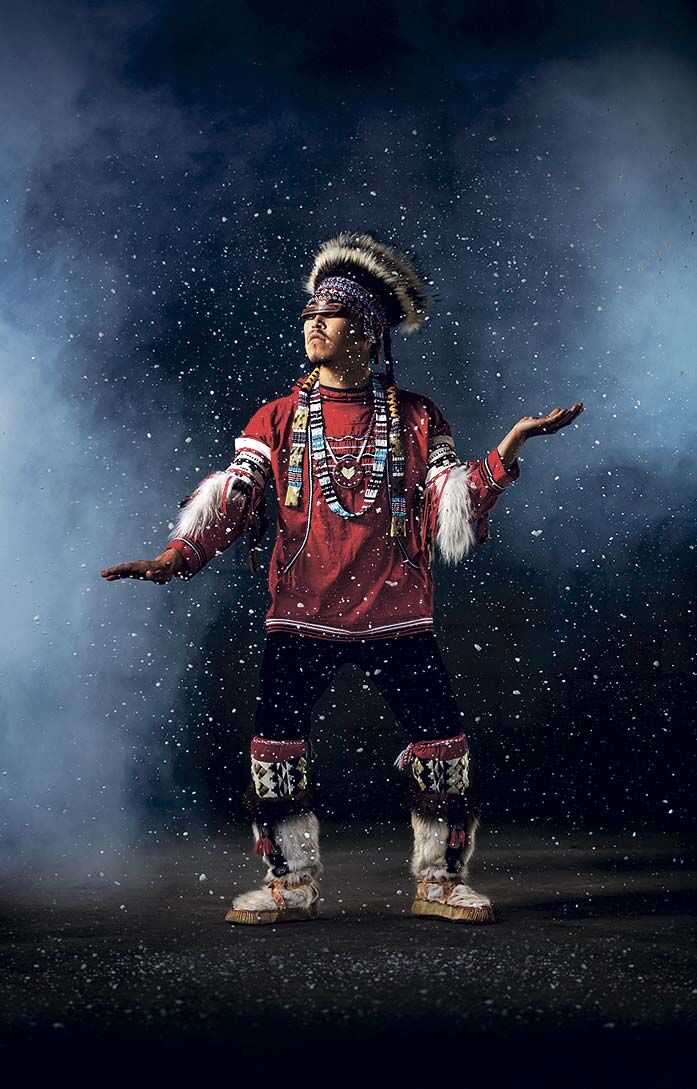 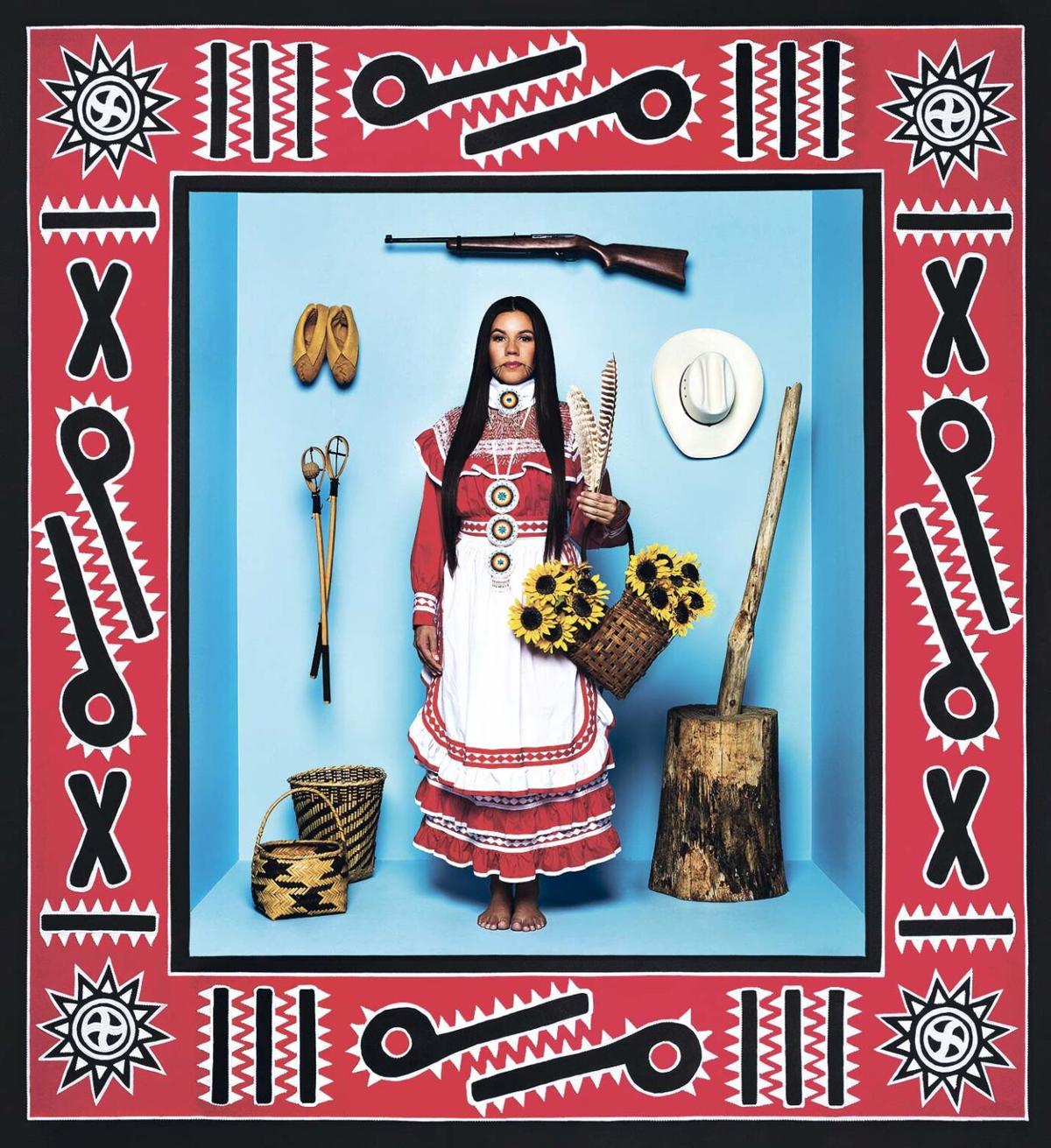 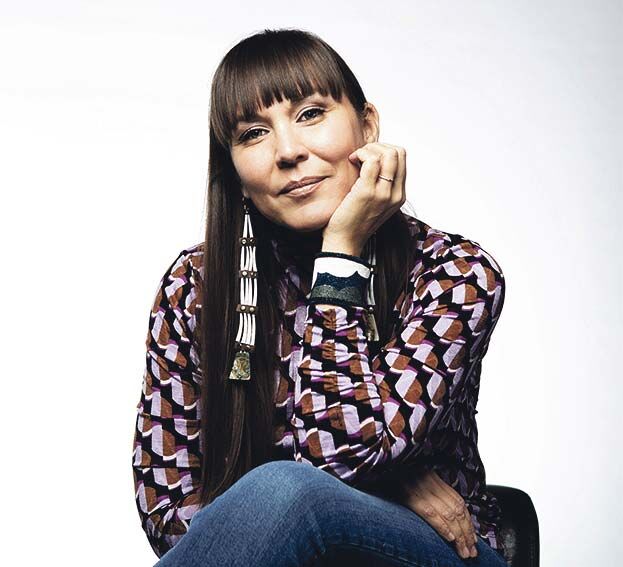 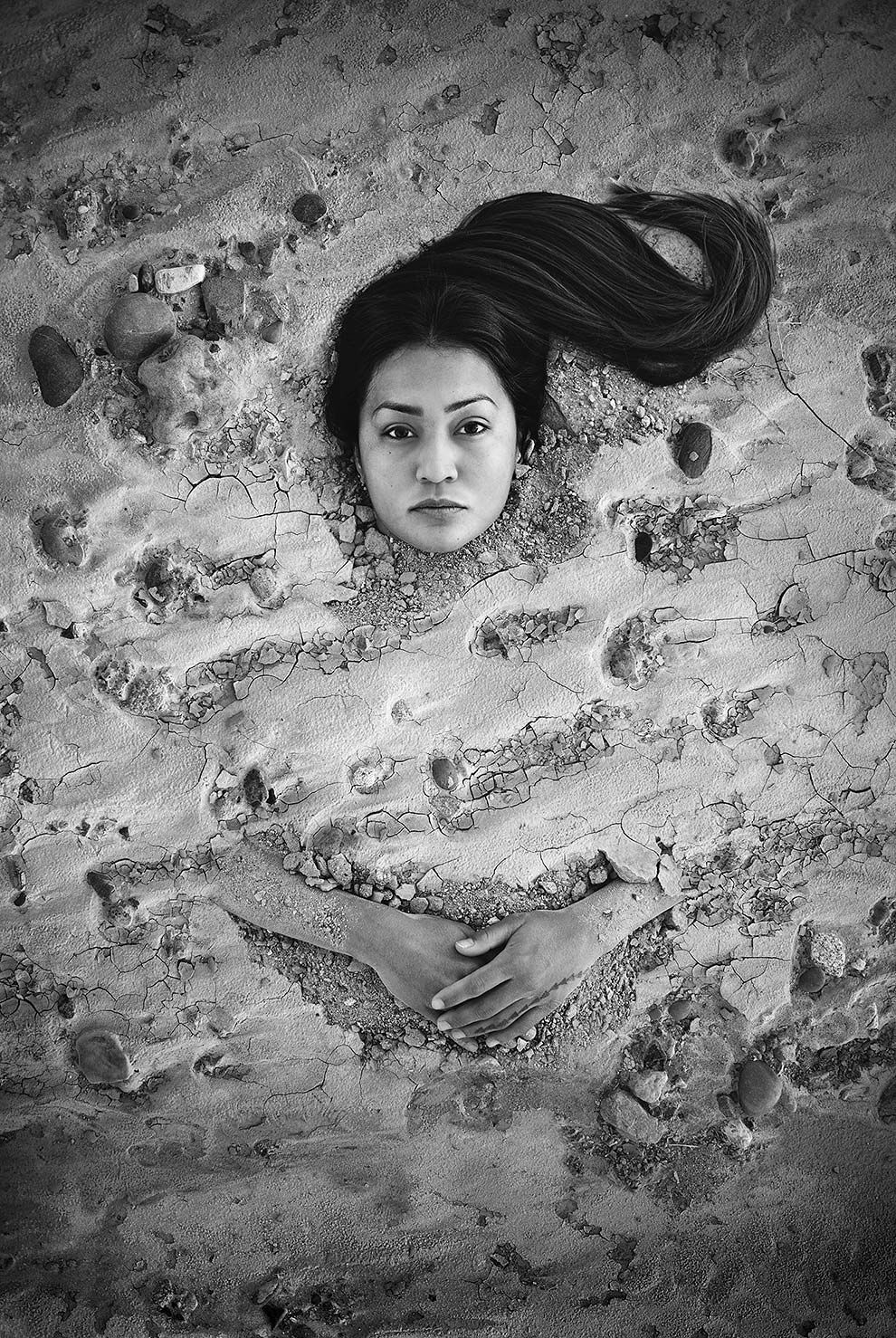 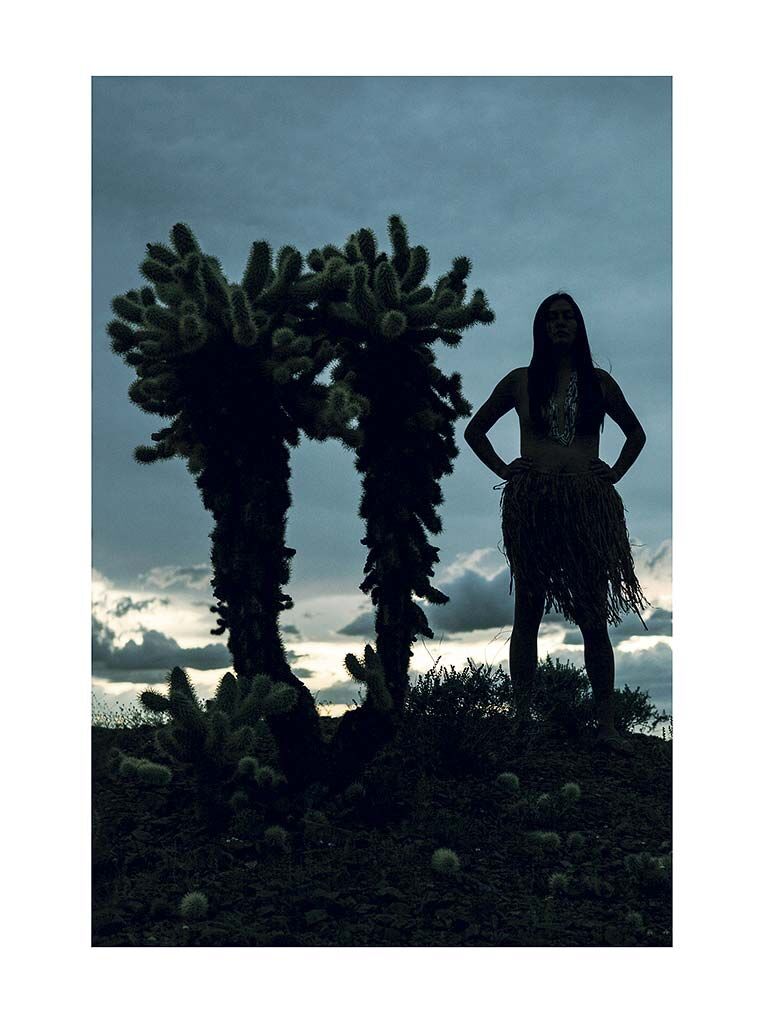 Long before the days of photographer Edward S. Curtis, whose illustrious portraits of Native peoples were often staged and inauthentic, Native peoples endured misrepresentations of their culture. Inaccurate depictions persisted throughout the 20th century in art, advertising, photography, film, and television. Take, for example, Iron Eyes Cody, whose famous tear tugged at the heartstrings of millions of Americans when Keep America Beautiful’s 1971 commercial decried environmental pollution. Cody, it turned out, was an Italian American actor, and the campaign was sponsored by beverage and packaging that was opposed to environmental legislation and causes.

In Cara Romero’s photograph TV Indians, a wry commentary on how Native people are depicted in the media, four figures sit, lean, or stand by a bank of television sets. Each set shows an image on its screen: a crying Iron Eyes Cody, for instance, and the Navajo character Billy Jack (played by Wisconsin-born actor Thomas Laughlin). Originally released in sepia tone in 2017, a newly produced color version is the centerpiece of Romero’s section of the five-person Alcove 20/20 exhibition at the New Mexico Museum of Art.

“It was kind of a postmodern response to Curtis,” says Romero, 43. “So I took it into sepia tone, but I always loved it in color.”

Countering Eurocentric narratives and celebrating the rich cultural diversity of contemporary Indigenous cultures are primary themes in Romero’s work. Selections from her Native Women (2014-2020), Pop Culture & Our Indigeneity (2013-2019), and Jackrabbit (2017-2020) series are on view at the museum. In addition, examples from Native Women, Jackrabbit, and First American Girl (from 2015-2019) are on view in a solo exhibition at Gerald Peters Contemporary.

The museum show is the fourth and final installment of a series that began in 2019. Each Alcove exhibition features a series of concurrent solo installations. But no overriding theme exists from one artist installation to the next. “I want the individual shows to be so strong that they don’t need the other artists’ works to give them import,” says Merry Scully, the museum’s curator of contemporary art. “But there is kind of a sub-theme of landscape.”

Striking and impactful, all of Romero’s work is a testament to the power of representation, and how images shape our impressions. Romero’s bold use of color, for instance, makes an indelible imprint on the mind.

“So much of her work is about bringing awareness to contemporary Native peoples,” says Evan Feldman, gallery director at Gerald Peters Contemporary. “I think color helps make that introduction to an audience who’s either new to the subject matter or more familiar with contemporary culture and pop culture. Her clever use of color is a way for her to segue and connect with the audience.”

Romero is a member of the Chemehuevi, a tribe whose reservation is in southeastern California in the Mojave Desert. Her work is marked by vivid color (often featuring characters in desert landscapes) and inherent contradictions intended to underscore a specific narrative. Namely, it contrasts contemporary and traditional Native subjects while being mindful of both: two vital aspects of what it means to be Indigenous today for many people.

“There are things that are ever permanent,” Romero says. “That’s how we have to be, culturally, for survival and for our traditions and culture to be passed on from one generation to the next. The other side of it is the contemporary, this reality, and truth of living in modern times and living with modern conveniences. I think with Native people, you’ll often hear ‘a foot in both worlds’ type of scenario being expressed because we have to learn to communicate in both communities.”

Romero was born in Los Angeles to a Native father and non-Native mother. She divides her time between Santa Fe and her home in the Mojave Desert. Her parents divorced when she was young, and she spent much of her youth traveling between California and Houston. When she enrolled at the University of Houston in the mid-1990s, her intention was to pursue a degree in cultural anthropology. But two things happened that altered the trajectory of her career.

One was disillusionment over how Native studies courses represented Indigenous peoples. “Everything was taught as bygone, or in historic contexts,” she says. “I realized that most people didn’t have a really good grasp of contemporary Native peoples.”

The other was a course she took as an elective.

“I just stumbled into the right class that changed my fate,” she says. “I took black-and-white photography from Bill Thomas, who was a protest photographer, and he emphasized content over technical ability. I was way behind the other students. I had never owned a camera or picked up a camera before this class. But I had no problem figuring out the content portion. I figured out, early on, the power of photography to convey message, storytelling, and that — that old adage — ‘a picture is worth a thousand words.’ I just knew that it’s what I wanted to pursue. I wanted to be a photo-documentarian, a photojournalist.”

Romero’s interest in photography brought her to the Institute of American Indian Arts in 1999. It was the dawn of the digital era of photography. But Romero, trained in the darkroom techniques of silver gelatin printing, resisted the new technology. “I continued to make silver gelatins.”

That changed at Oklahoma State University, where Romero studied commercial photography. The program was all digital. But the emphasis was on an entirely different school of thought.

“One was all about fine art, and do whatever you want to do and what your vision is, and just come back with 20 pieces and an artist statement at the end of the semester,” she says of her experience at IAIA. “It was brilliant, as a young person, to be able to explore identity pieces and do black-and-white film and be in the darkroom. The other one was, like, ‘you’re not graduating unless you know how to make money doing this.’ It was all about product, advertising, editorial portraits, and executive portraits.”

The work she does today is a combination of her interest in fine art photography and training in commercial work. Her environmental portraits, like her studio photography, aren’t candid but posed and, like Curtis, she’s not averse to using props, albeit for an entirely different purpose, one that could be called celebratory.

It’s evident in her Native Women series, where each subject is a powerful symbol — not only of Indigeneity but of womanhood. In Yucca Woman (2017), which is on view at the museum, a figure in silhouette strikes a proud, defiant stance, hands at her hips. She stands next to two tall yucca plants, conveying the idea that one is as integral to the land, or to place, as the other.

“I think she does a really wonderful job of bringing into the work the strength and resilience of Native women specifically, in a way that’s sometimes quite traditional in terms of the portraiture,” Feldman says. “It isn’t meant to be objectifying in any way but meant to bring them visibility.”

In Amber Morningstar (2019) and Julia (2018), both from the First American Girl series, the models are posed stoically in life-sized reconstructions of doll boxes, surrounded by the pre-colonial objects belonging to their Indigenous heritage. The point is that despite efforts stemming from colonialism to erase Native heritage (or confine it to a box, so to speak), Native cultures have persisted.

“I’m from a tribe that enjoys a great amount of gender equity,” Romero says of the Native Women series. “My grandmother was chairwoman of our tribe when I was a little girl, so I was no stranger to women’s leadership. Traditionally, the canon, as they say, is dominated by non-Native men. When you put a woman behind the camera, the subject matter is very different. It’s going to be very maternal, very empowering. It’s going to be the opposite of objectification, the opposite of exploitation. It comes from a different place altogether. It comes from love, understanding, and autobiography. As you find your strengths as an artist, you tell the stories that are closest to you,” Romero says. “As an artist, you can only tell your own truth.” ◀