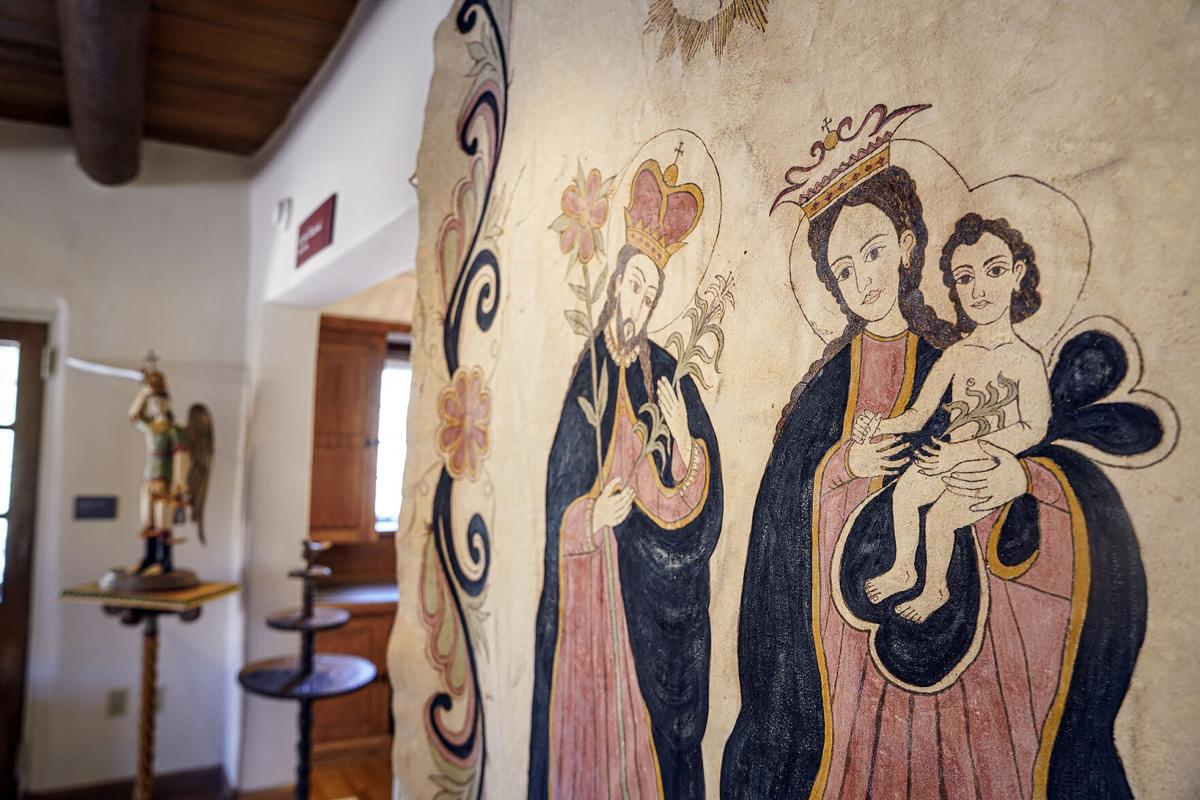 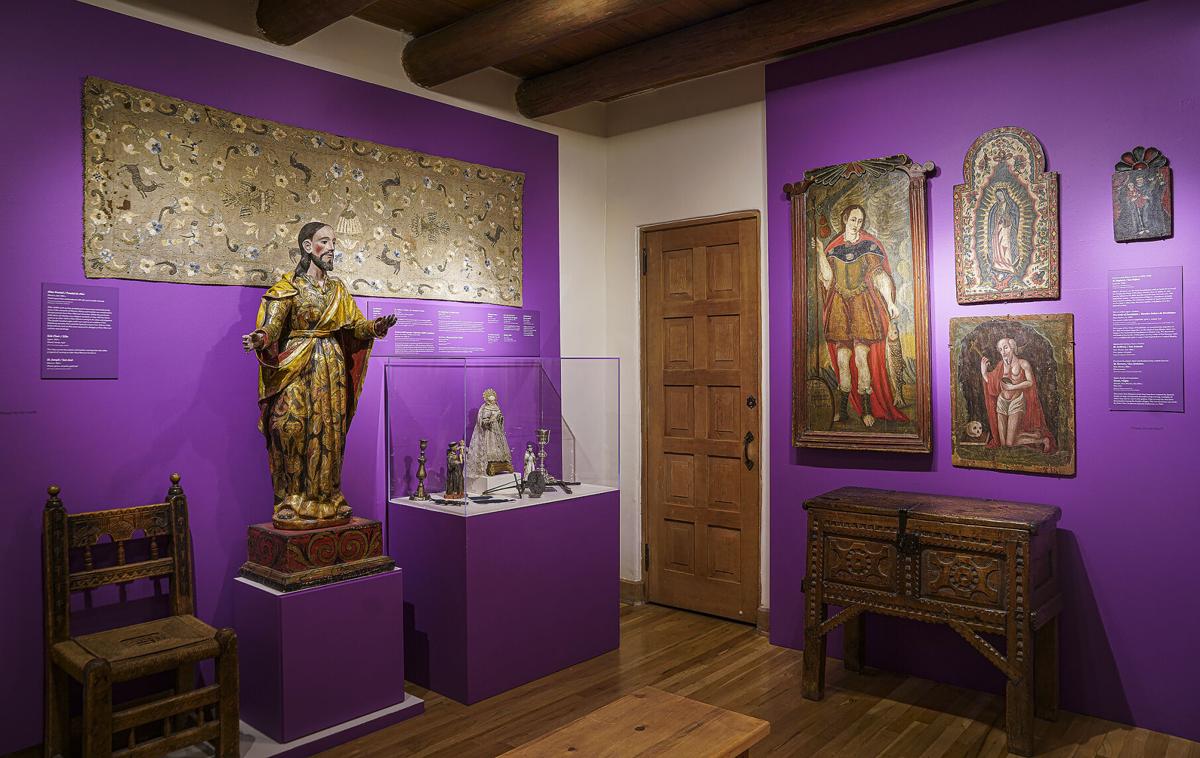 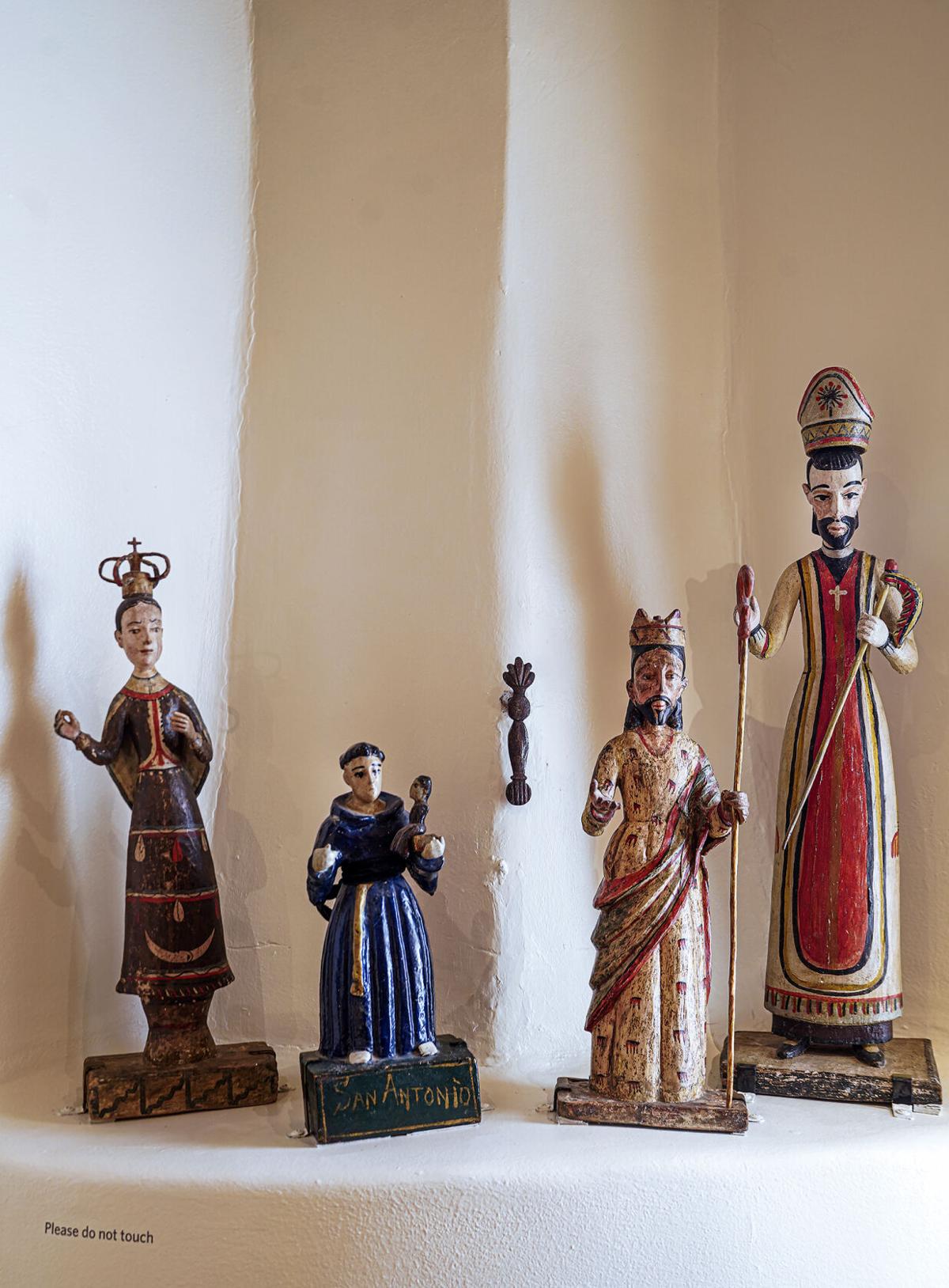 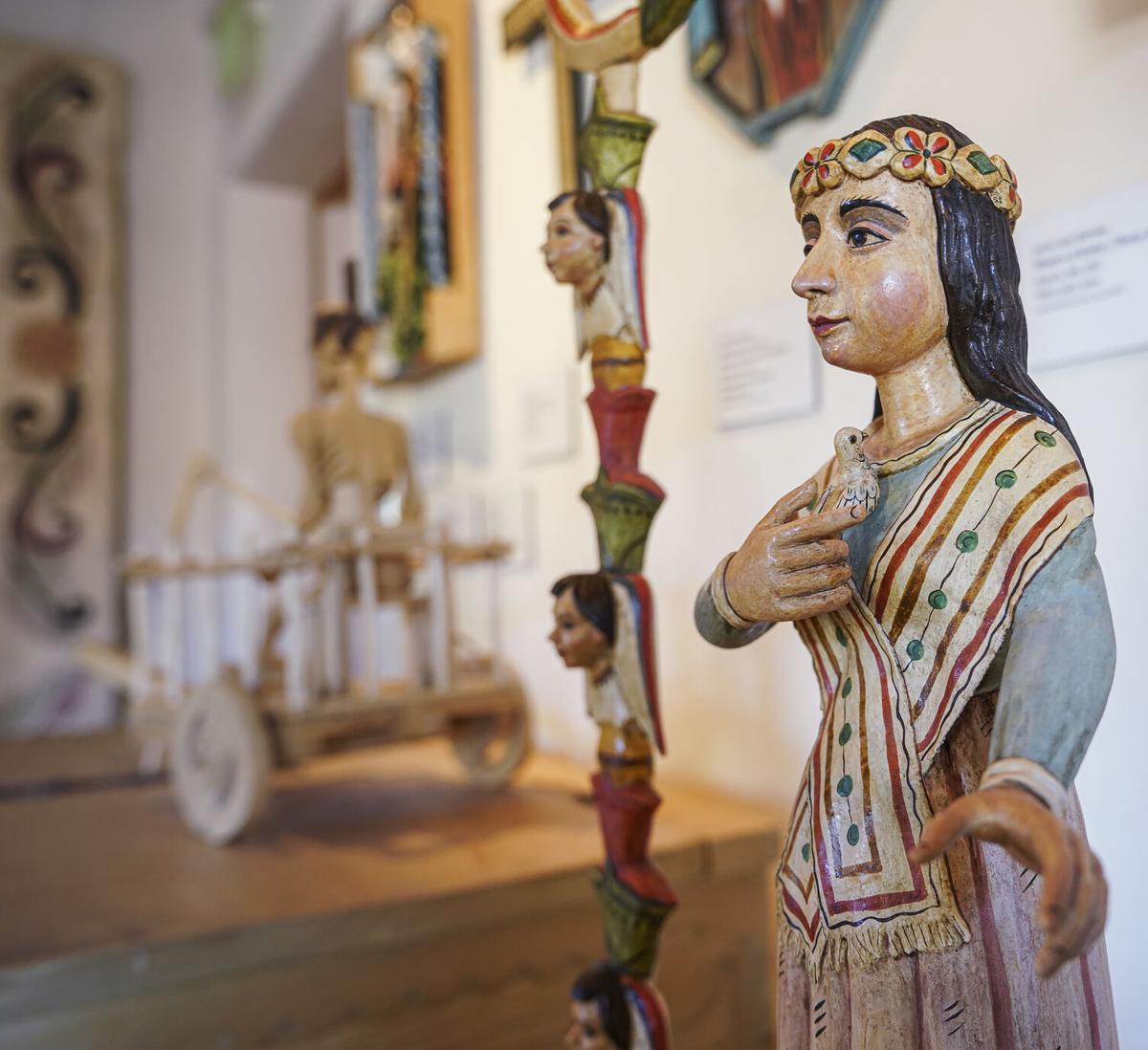 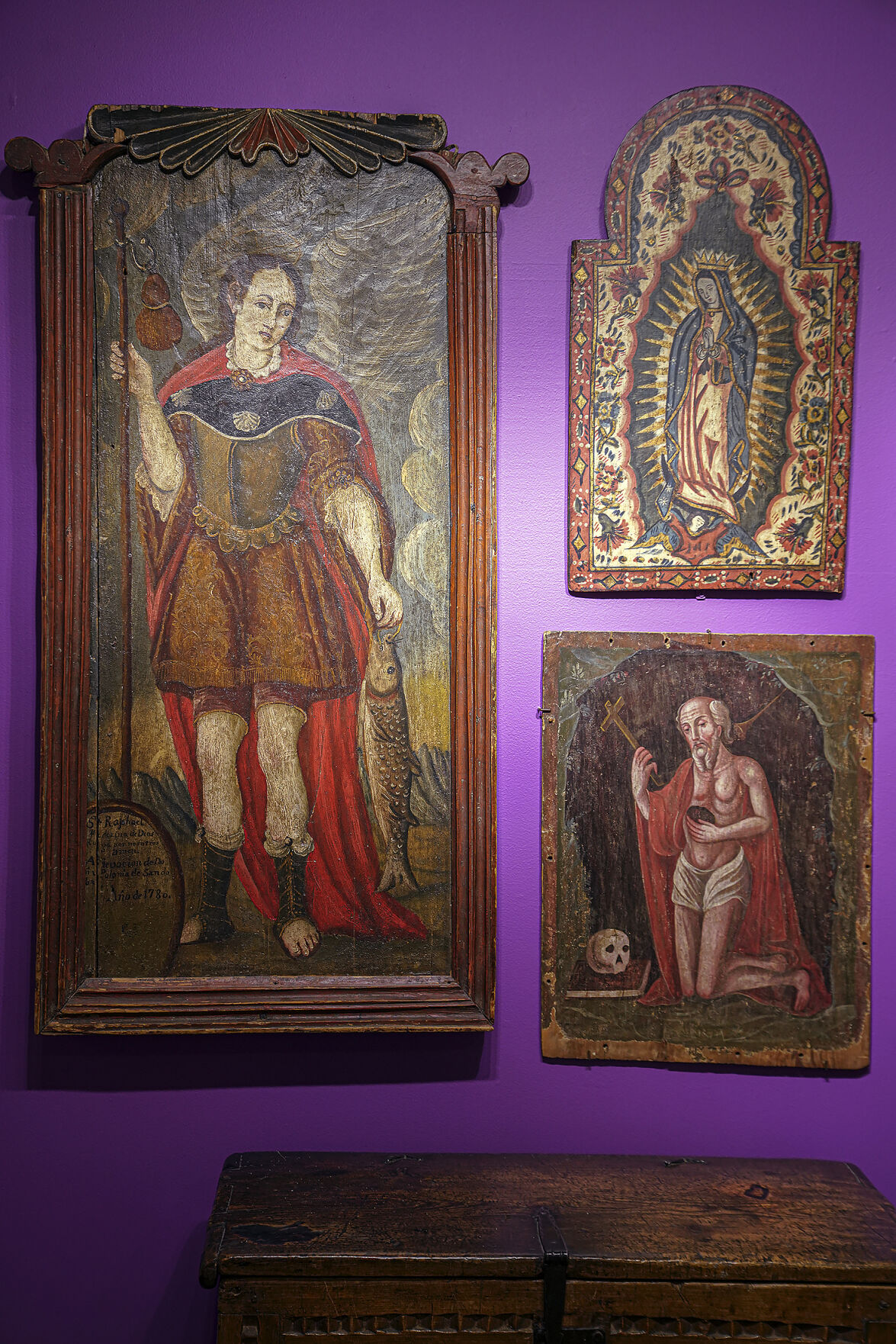 Clockwise from top left, Don Bernardo Miera y Pacheco’s painting of St. Raphael/San Rafael (1780); the image of Our Lady of Guadalupe (1790), attributed to the school of the anonymous “Laguna Santero”; and the image of St. Jerome (Hieronymous)/San Jerónimo (18th century); all exemplify the influence of Spanish and Mexican Baroque art; photo Gabriela Campos/The New Mexican

Clockwise from top left, Don Bernardo Miera y Pacheco’s painting of St. Raphael/San Rafael (1780); the image of Our Lady of Guadalupe (1790), attributed to the school of the anonymous “Laguna Santero”; and the image of St. Jerome (Hieronymous)/San Jerónimo (18th century); all exemplify the influence of Spanish and Mexican Baroque art; photo Gabriela Campos/The New Mexican

The story of Spanish Colonial art is one of four centuries of evolving art forms. It’s also a story of trails and of trade along historic and prehistoric routes through the Southwest into Mexico. Historic trade routes made Santa Fe what Robin Gavin, curator emeritus at the Museum of Spanish Colonial Art, says historians refer to as an “inland hub.” El Camino Real de Tierra Adentro, which stretched from Mexico City to San Juan Pueblo (Ohkay Owingeh), the Spanish Trail, from settlements in Northern New Mexico to southern California, and the Santa Fe Trail from New Mexico’s capital city to Franklin, Missouri, brought an influx of people and cultural objects that influenced the development of the state’s unique artistic heritage.

But even before the Spanish began trading with the world, and bringing items from Europe, Asia, and South America to what was once a province of New Spain, Indigenous communities had preexisting trade routes of their own. And those were the routes the Spanish, who arrived in the late 16th century, used as the foundations for their own trails, some of which extended into the interior of Mexico.

And that is where Trails, Rails and Highways: How Trade Transformed the Art of Spanish New Mexico begins. The Museum of Spanish Colonial Art exhibit, which was curated by Gavin, is a chronological journey through the phases of New Mexico history that shaped Spanish Colonial aesthetics and which continue to influence the art of many contemporary Hispanic artists working in the region.

The exhibition, which is now open to the public after being closed since last winter, features more than 200 objects from the museum’s permanent collection. They include paintings, prints, furniture, tinwork, jewelry, domestic objects, textiles, and tools. They’re arranged in six sections that reflect specific themes, from the pre-Hispanic Native trails, and the impact of the railroad, to the work of contemporary regional artists.

The museum is a historic 1930 Spanish colonial-style building designed as a residence by architect John Gaw Meem. Outside the entrance, a National Park Service sign commissioned by the museum shows an inset map of the museum property in relation to the original route. Another graphic depicts the Santa Fe Trail, El Camino Real, and the Spanish Trail merging in Northern New Mexico. It sets the stage for the eclectic collection of artworks and utilitarian objects that emerged from those trade routes.

“This is where the earliest Spanish settlements were, and this is where a whole convergence of cultures came together,” Gavin says. “The museum has the depth and breadth of the collections to show that.”

The first room, mostly bare of artwork, shows off Meem’s interior design. The architect hired Hispanic artisans to carve all the woodwork, including the corbels on the building’s exterior and the radiator covers throughout the interior. But maps on the wall introduce the visitor to the scope of Spanish trade, which, by 1565, extended from Europe to the Americas and the Philippines, and from the Philippines to Asia. Hence, items from the world over eventually made their way up El Camino Real to Santa Fe.

“We’ve found Chinese porcelains at archaeological sites here from the 1600s,” Gavin says. “We don’t have a lot of objects from that time period, but we have wills, inventories, lists of possessions that tell us the kinds of things that were coming up all during the colonial period, from 1598 to 1821. There are kimonos listed in the documents from the 1700s, and things like hair combs, filigree jewelry, silver items, small images of saints, as well as prints and paintings. All of these had an influence on the art that developed here.”

The earliest artist to work in New Mexico was Don Bernardo Miera y Pacheco (1713-1785). His 1780 painting of San Rafael is included in the exhibit. Gavin is quick to point out that there are records indicating that some Native artists created images of santos under the direction of Spanish friars, but their names are not known.

“Miera y Pacheco was not a trained academic artist, but he was very much aware of the style that was popular in Spain and Mexico at the time, which was the late Baroque style,” she says. “It shows naturalistic figures with volume in the drapery with dark somber colors. All of these are characteristic of the academic Baroque style. It was all very concentrated on depicting realism and naturalism in the faces, the figures, the stances. That’s what the artists in New Mexico were trying to do at the time.”

But by the end of the colonial period, the artistic styles of imported religious icons merged with an Indigenous aesthetic to form what would eventually be considered New Mexico style. You can see it most readily in paintings of saints by José Aragón (circa 1789-circa 1860, as well as anonymous artists of the time: a flat, two-dimensional style that retained all of the motifs traditionally associated with particular saints (the skull and the cross that typically accompany icons of San Francisco de Asís, for instance) but none of the earlier naturalism. It was a reductive style with an emphasis on geometric pattern and design, using bold blocks of color, which was likely a Puebloan influence. “Thirty or 40 years ago, art historians were all saying, ‘Well, New Mexicans didn’t know how to draw or make the human figure.’ That just wasn’t true. They could be much more naturalistic if they wanted to. But they were rejecting that whole aesthetic perspective in favor of one that reflected more of the environment they were in.”

A significant factor in the change in style was a direct result of the Mexican War of Independence, when New Mexico became a Mexican territory.

“New Mexico became part of a Pan-American revolt against the Spanish,” Gavin says. “And a natural outgrowth of that was a protest against the Spanish guilds that regulated the artwork in Spain and in New Mexico: what you could produce, what it was supposed to look like, how it was made, the materials used. When the guilds were abolished, there was a movement all across the Americas to develop styles as more of an expression of their own history and culture.”

Trade outside of New Mexico and intermarriage between Hispanics and Indigeneous peoples were also integral to the evolving regional art forms, as were the efforts to convert Native peoples to Catholicism. “If you’re trying to show people images of the Virgin and Christ, it behooves you do it in a style that’s more along the lines of their aesthetic thinking.”

In short, external and internal influences worked their way into the art of Hispanic New Mexico. Rio Grande blankets, for instance, bore the hallmark serrated chevrons of Mexican Saltillo serapes, for example. But influences also extended outward from the Americas to other parts of the world. A case in point is a machine-woven coverlet from circa 1900, produced in Czechoslovakia and included in the exhibit. Its serrated diamond motif is also based on the Mexican Saltillo serape. “So this was woven in Eastern Europe, based on a design from Mexico, and collected from a home in northern New Mexico,” Gavin says. “Again, it just shows the incredible impact of trade and how designs were reconfigured and reused.”

But with the influx of objects in the 19th century, which only increased with the introduction of the railroad, there was a decline in locally made art, including textiles, religious items, and furniture. The decline coincided with increased accessibility to manufactured goods.

Then the completion of Route 66 in 1926 ushered in a whole new era of tourism, which brought renewed interest to Native American and Hispanic arts and crafts. “A couple of merchants, Jake Gold and Jesucito Candelario, tried to find different ways to capitalize on the new tourism. One way was they went to the weavers in Chimayó and directed them to make what they called buggy blankets, which were lightweight versions of Navajo blankets that could be sold, packed, and shipped more cheaply. They reinvented the traditional Rio Grande weaving into what we now call the Chimayó style.”

It was one indication of a revival that was taking hold across a spectrum of Hispanic arts. The formation of the Spanish Colonial Arts Society was integral to this revival, and held the first Spanish Market, which continues to this day, in 1926. There was even a Colonial Hispanic Crafts School in Galisteo that taught embroidery, tanning, saddlemaking, weaving, and woodworking.

The last three sections of Trails, Rails and Highways are devoted to works by modern and contemporary artists. That’s significant for an institution that operates under the auspices of the Spanish Colonial Arts Society, which is often criticized for its strict adherence to the traditional styles, methods, and materials promoted during its annual Spanish Market event.

Featured in these sections are works by artists who adapt Spanish Colonial aesthetics to a contemporary idiom. Some use traditional-style bultos and retablos to explore social and political themes relevant to today, and others merge the iconography of older art forms with contemporary imagery, making the work fresh and accessible to a modern audience. Take, for instance, Victor Goler’s The Holy Family: Cruising Heaven (2016), a bulto depicting the figures of Mary, Joseph, and Jesus racing over empyrean clouds in a sporty red and white lowrider convertible.

But other works reveal the impact of outside cultures, proving that no art form exists in a vacuum, which is a prominent take away from the exhibit as a whole.

Julia Gómez’s colcha embroidered wall hanging from 2009, Tree of Paradise, for example, was inspired by the Paradise Garden Murals located at an Augustinian monastery in Malinalco, Mexico. Rendered mostly in black and white, the 16th-century murals are rife with motifs of flora and fauna, intertwining in an ornate vision of a utopian idyll. Gómez translates the painted designs using a completely different medium.

Trails, Rails, and Highways: How Trade Transformed the Art of Spanish New Mexico

Open 1 to 4 p.m. Thursdays through Saturdays