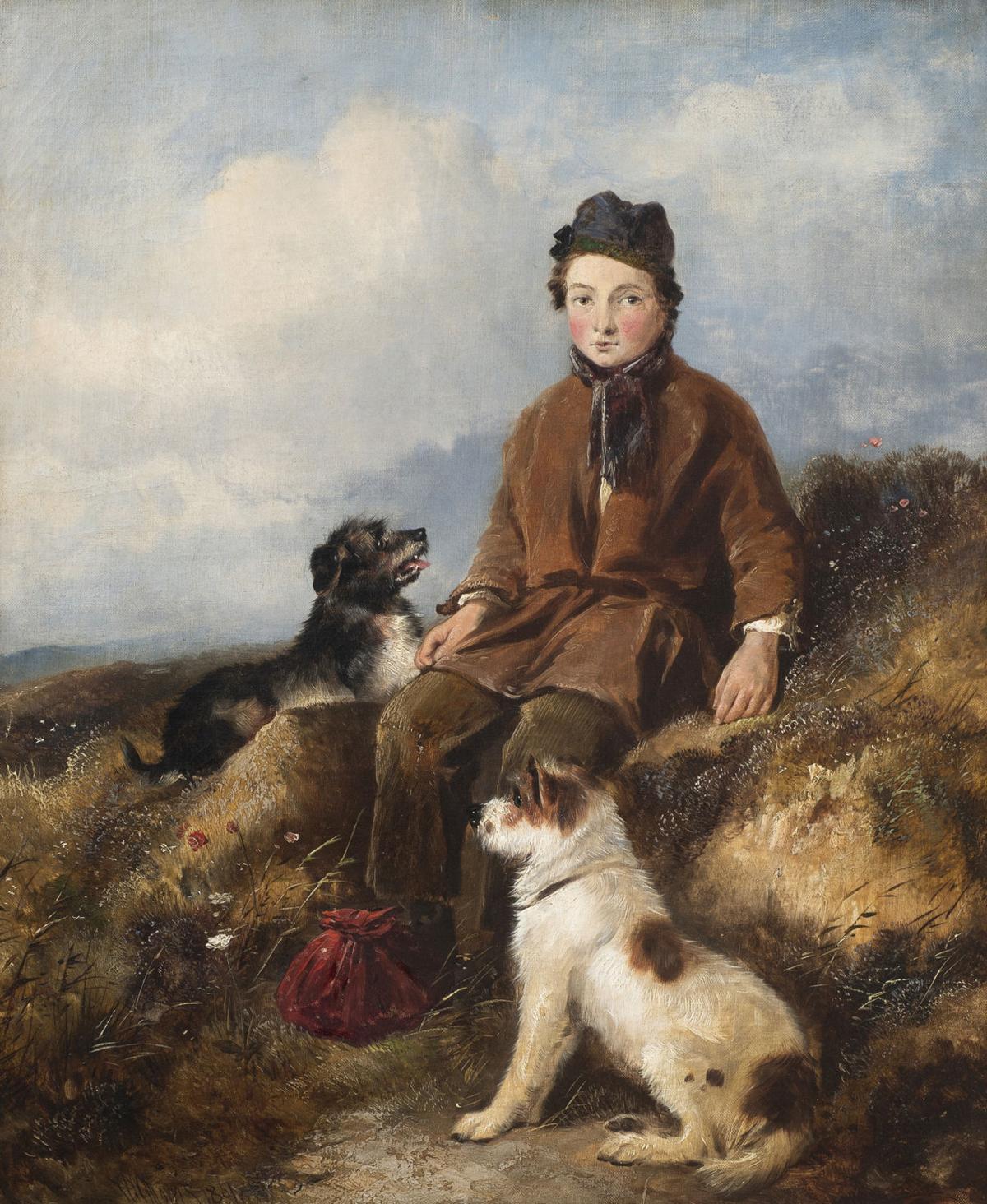 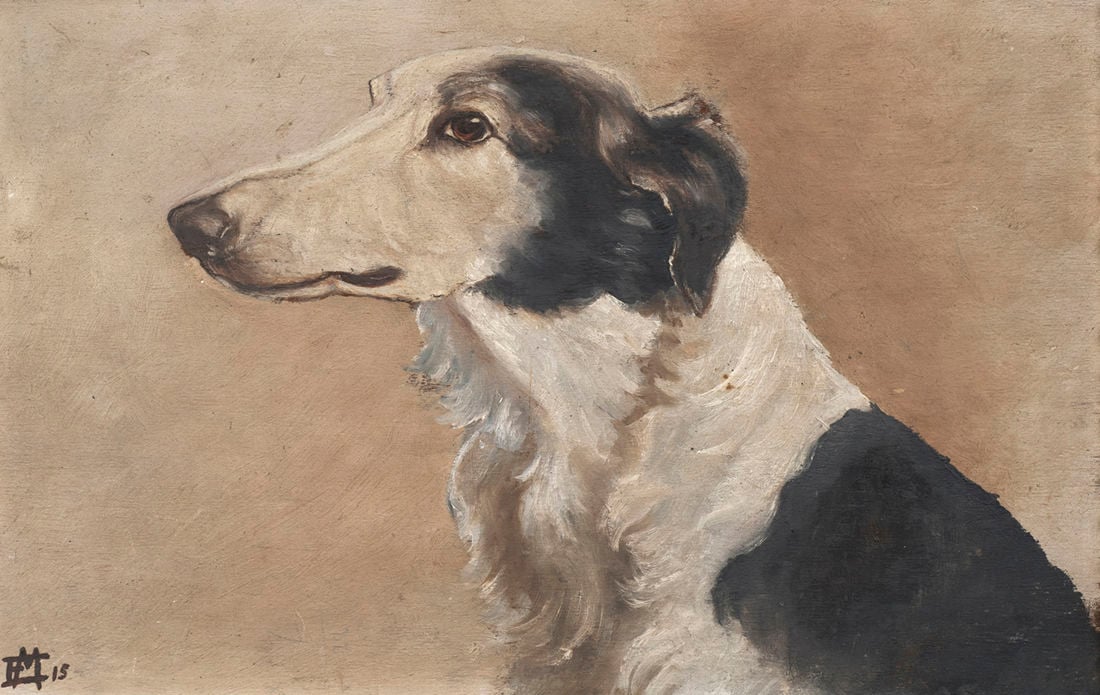 A portrait of a Borzio from the early 20th century, oil on canvas 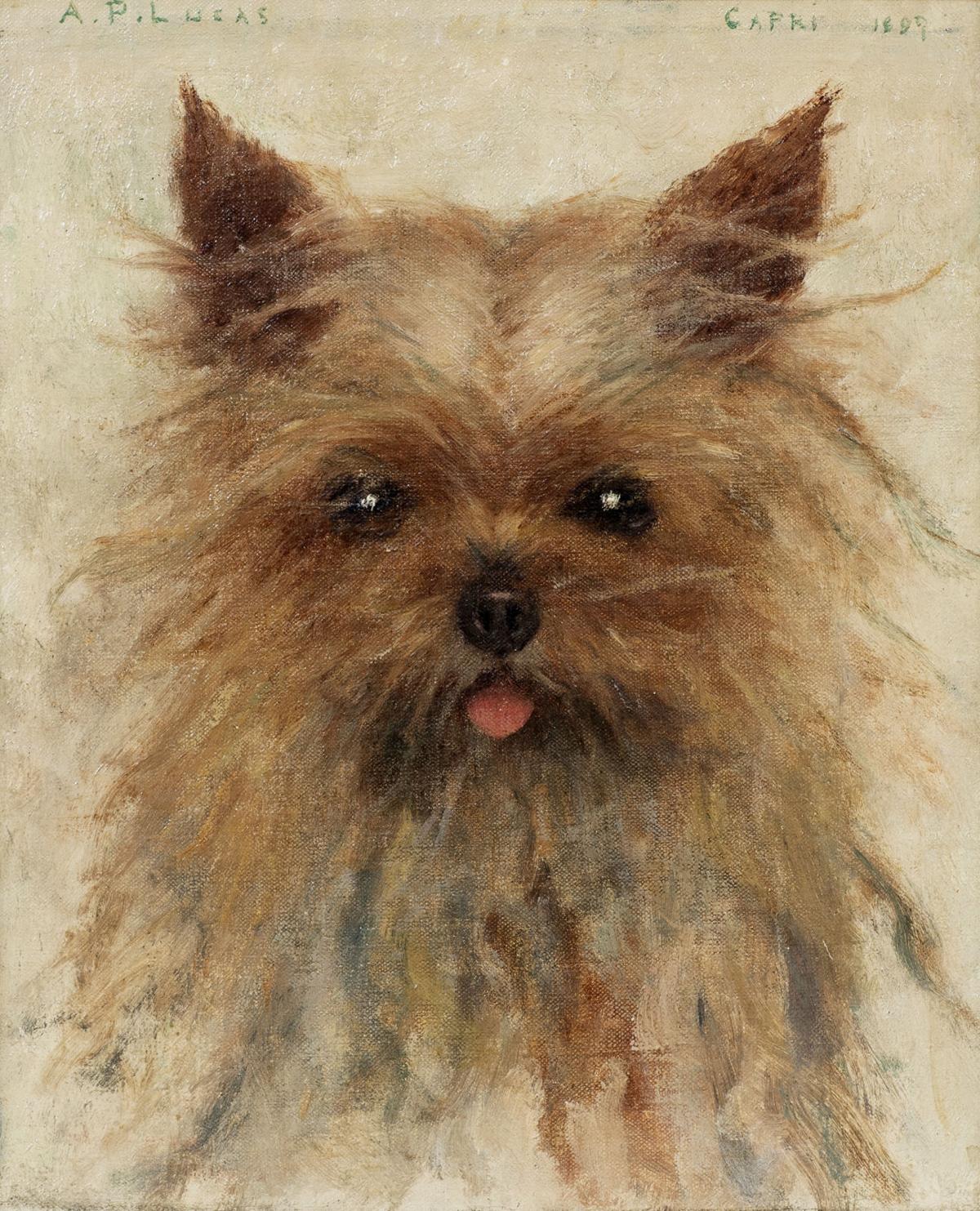 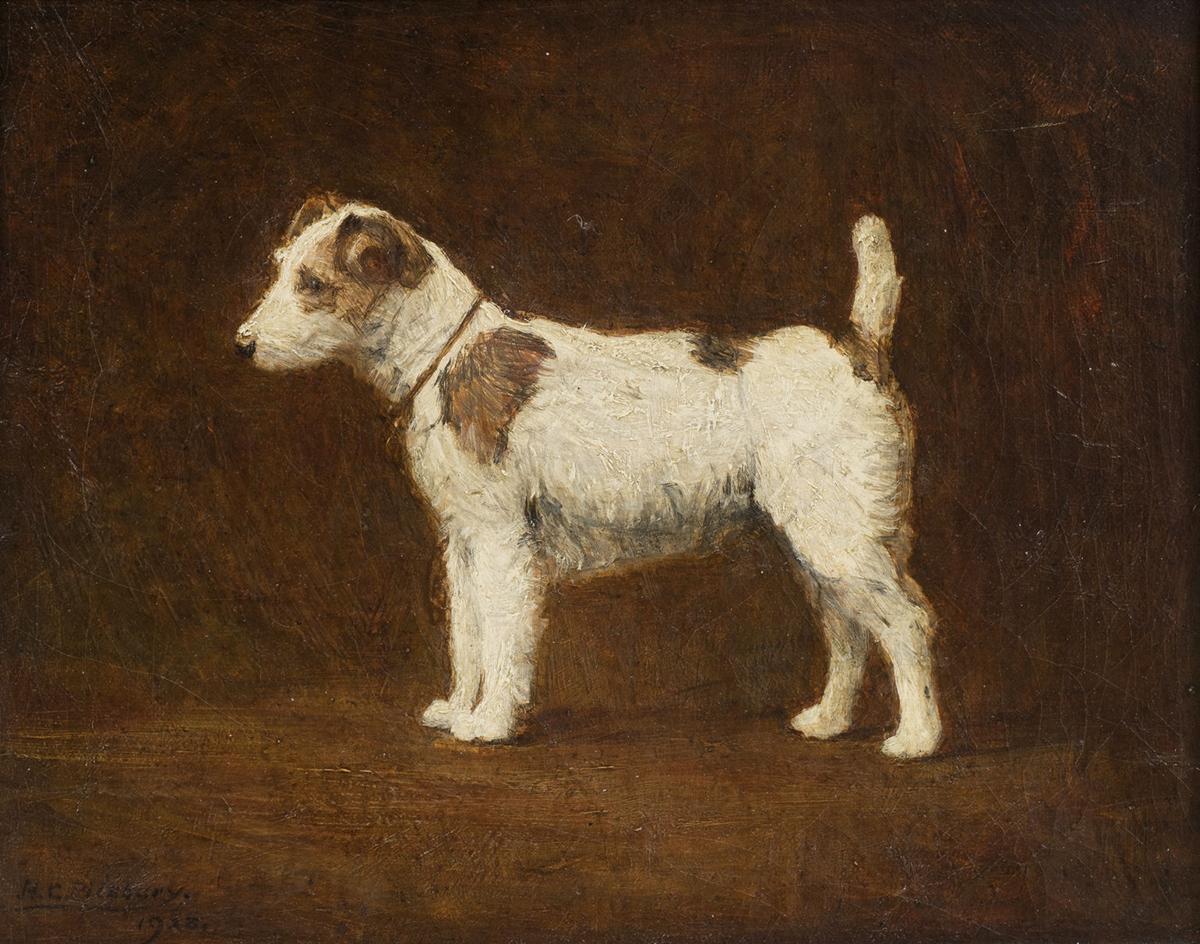 A portrait of a Borzio from the early 20th century, oil on canvas

One thing is for certain: Whether the artists of the 17th century were painting their own pets or working on commission, dogs were a subject of great passion. Take Italian Baroque painter Giovanni Francesco Barbieri’s Aldrovandi Dog, circa 1625 (in the collection of the Norton Simon Museum). The imposing figure of the brindle-coated mastiff is seen in profile, standing at stoic attention and filling the 44-by-68-inch canvas. The low horizon line and diminished scale of the castle in the background only emphasize the dog’s massive frame. This is a dog that commands respect. More typical commissioned portraits from the era would show the dog beside his owner, Count Filippo Aldrovandi, in the manner of Titian, say, who made many such portraits of the nobility beside their beloved best friends. We know this dog belonged to Aldrovandi because his collar bears the Bolognese count’s coat of arms. Even without the presence of the count, the dog conveys the power, might, and noble presence of the Aldrovandi family name.

“As a species, human beings are meaning makers, as well as profoundly narcissistic, and dogs are our most faithful mirror,” says Kirsten Pai Buick, professor of art history at the University of New Mexico. “Therefore, depending on context, dogs can represent fidelity or the lack thereof. When accompanying men, they can represent prowess in sport and the power of men to bring the wild under domestication. When accompanying young girls, they can represent the domestic process itself as women’s atavistic nature must be tamed in order to continue the species.”

There are not many places in Santa Fe, if any, where you can see similar animal portraits from the art historical canon, outside of KSG Fine Art Gallery at the Inn & Spa at Loretto. The gallery, which opened in December, specializes in art from the 17th, 18th, and 19th centuries — with some work that is older than that, and some from the early 20th century. Sharing the new gallery with a lush and sensuous 17th-century floral still life by French painter Jacques Samuel Bernard — teeming with life and so vividly rendered you can almost smell the fragrance of its roses, tulips, and carnations — is an entire wall of dog paintings.

These are not maudlin portraits by amateur hobbyists but serious works by professional artists, many of whom were quite prominent in their day. For instance, an adorable Yorkshire terrier with darting tongue, from 1899, was painted by Alfred Pike Lucas, an American landscape, portrait, and figure painter who studied at the École des Beaux-Arts in Paris and was known as a master at rendering diffused light.

In addition to the Yorkie, there’s a Jack Russell terrier, a borzoi, and a chihuahua. There are dogs at rest, dogs at play, terriers after rats, and hounds in the midst of the hunt. “We’re really trying to focus on finding unique pieces,” says gallery owner Scott Gordon.

“Getting a Cavalier King Charles is no big deal,” he adds, indicating that, since the days of King Charles II of England, the floppy-eared royal spaniel was a ubiquitous subject for artists, and not so rare as to make its presence in the gallery particularly remarkable. Gordon points to a pair of unattributed paintings from the British School of the less popular English bulldog, one of them muzzled, circa 1820; the rustic paintings are too similar to have been made by different artists. “I imagine that these were somebody’s prized fighting dogs.”

The dog paintings at KSG fall into three broad categories: working dogs, dogs as companions, and dogs as main subjects. Below the horizontal portrait of a borzoi from the early 20th century (another unattributed painting from the British School) is Dog Dozing in a Kennel (1907), made after an original by Belgian romanticist Antoine Joseph Wiertz, which hangs in the Wiertz Museum in Brussels. This copy is signed only “Southam.” It was rendered with a slight impasto technique that lends a tactile quality to the bricks of the arched kennel where the dog sleeps, a wooden bowl resting, empty, beside him. Gordon says it’s one of many copies based on Wiertz’s original. “When Wiertz died, his house became a museum,” he says. “He did all sorts of allegorical and fantastical types of painting. But you see, from time to time, that these students would make pilgrimages to his museum and specifically paint that.”

Gordon moves on to a superb rendering of a Jack Russell terrier, painted by British society portraitist H.C. Pilsbury in 1925. “You really get the muscle/skeletal structure in there, and it still has that crackling intensity of a terrier,” he says. Set against a backdrop of warm reddish browns, the terrier is seen in profile — a handsome specimen, with his tail shooting up vertically, at stiff attention.

As Gordon, who owns the gallery with his wife, Katie, threads his way along the wall from painting to painting, his reverence for technique — noting, time and again, the expressive quality and character of the dogs — is obvious. For instance, the piqued expression in a late-17th- or early 18th-century oval portrait of a poodle, Zoraida, suggests the pampered canine, who looks askance at the viewer, is dissatisfied with her dinner. “The name Zoraida in Arabic means ‘captivating woman,’” Gordon says. Clearly, dogs can be divas, too.

If you haven’t guessed, the Gordons are dog lovers. On any given day, you’re likely to find them at the gallery in the company of least one of their four rescue dogs: Phoebe, a border collie; Poco, a chihuahua; Hank “the Tank,” a Yorkshire terrier/chihuahua mix; and scruffy little Stanley, who Gordon says is half chihuahua and half mystery. The Loretto’s in-house pet portraitist, Lori Snable, was so taken with Stanley that she painted his picture. It hangs in a lobby display case advertising her talents and Snable’s services.

Most of the gallery’s dog paintings, as well as a fine selection of antique horse portraits, came from Burn Hall, a country house in County Durham, in northern England. But dogs and horses only represent a fraction of the gallery’s art. There are some religious-based works, some antique sculpture, andirons, numerous floral still lifes, and portraits as well.

But there are enough dogs to beg the question, why were they such a popular subject for artists during the few hundred years represented in KSG’s collection? Certainly, dogs have appeared in artwork since the days of antiquity, seen running and hunting in the backgrounds of religious, mythological, and allegorical scenes, or standing loyally beside their masters in formal portraits. Starting in the 17th century and continuing into the modern era, dogs became more of a central focus for artists, often being depicted separate from any human context, save maybe a collar or a domestic setting. What changed, as pastoral, domestic, and genre scenes became more popular subjects for artists, was the rise of a leisure or middle class. That meant more people keeping canines as pets.

“All of these would have never have happened if there were not so many wars in Europe,” Gordon says. “You’re getting into the Enlightenment, ending in the Industrial Revolution. People are coming into a little bit more extra money and a little bit more free time. The interesting thing that sort of ties this all together, that makes art history really cool, is because it is history.” ◀

But there are enough dogs to beg the question, why were they such a popular subject for artists during the few hundred years represented in KSG’s collection?