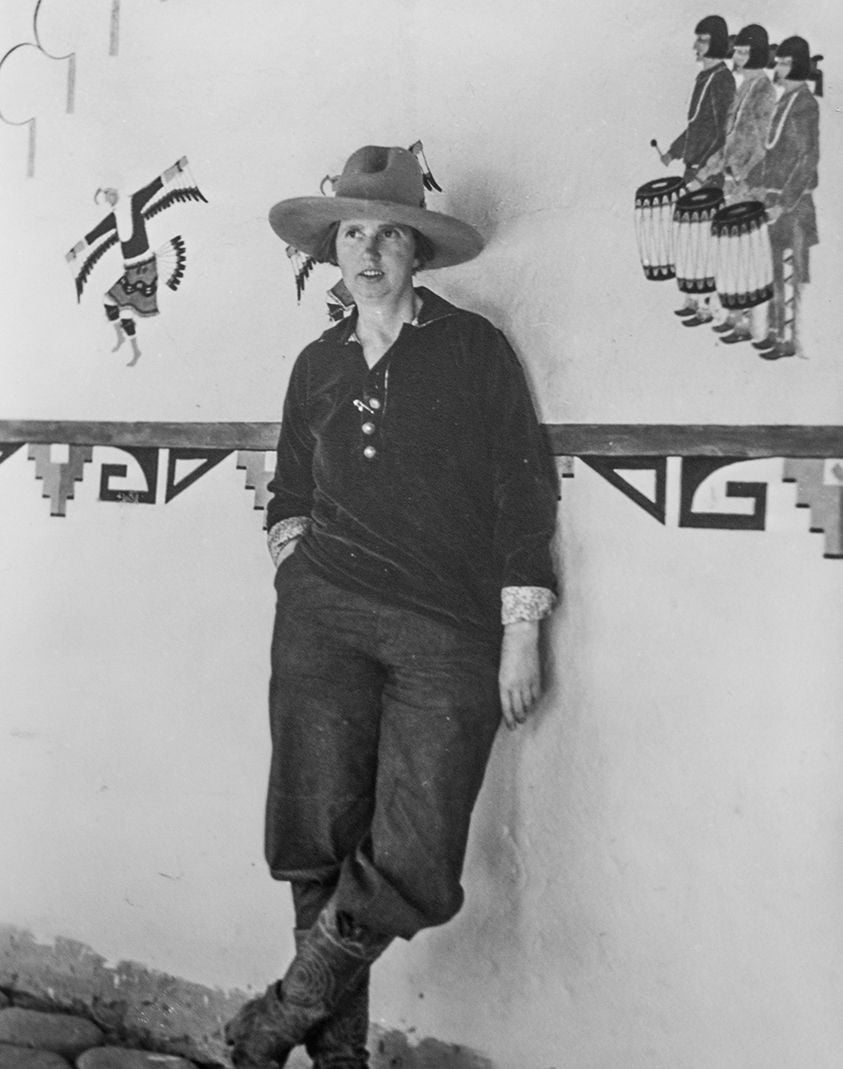 Remains of the day: Dorothy Brett, circa 1924, courtesy Museum of New Mexico Press 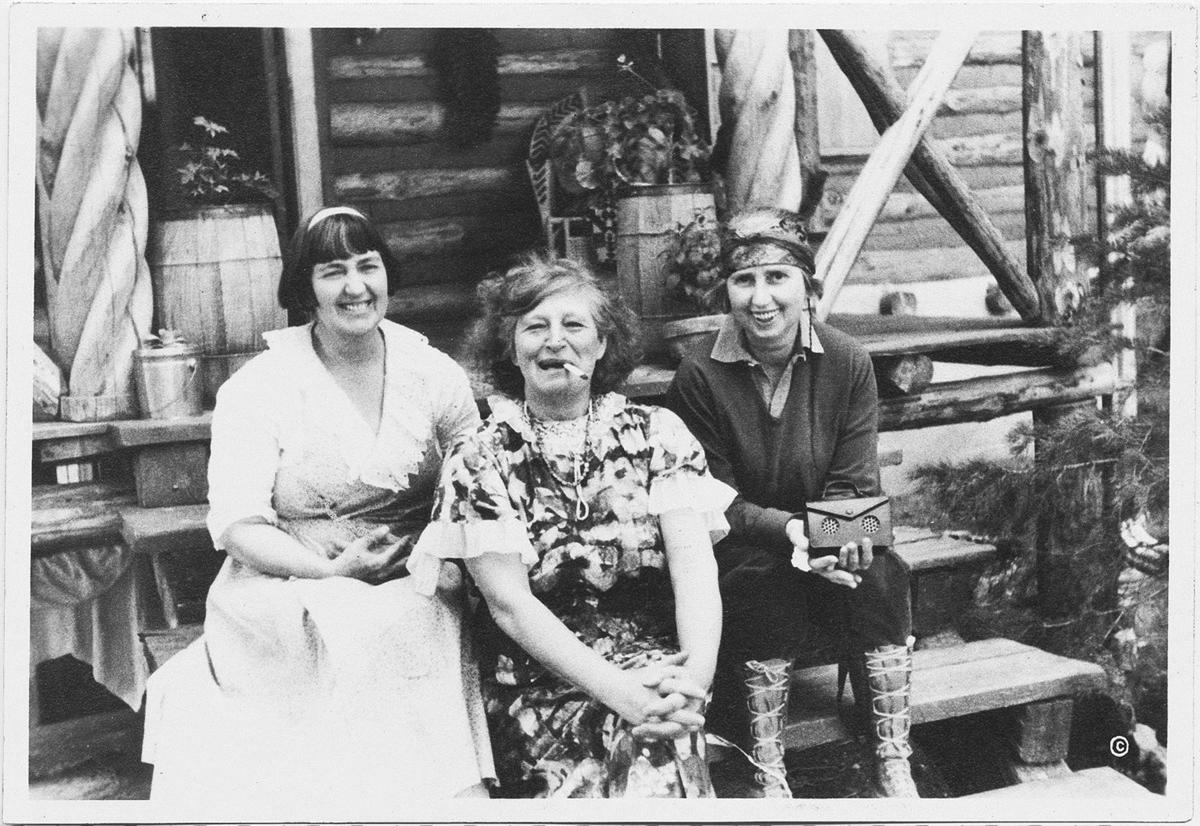 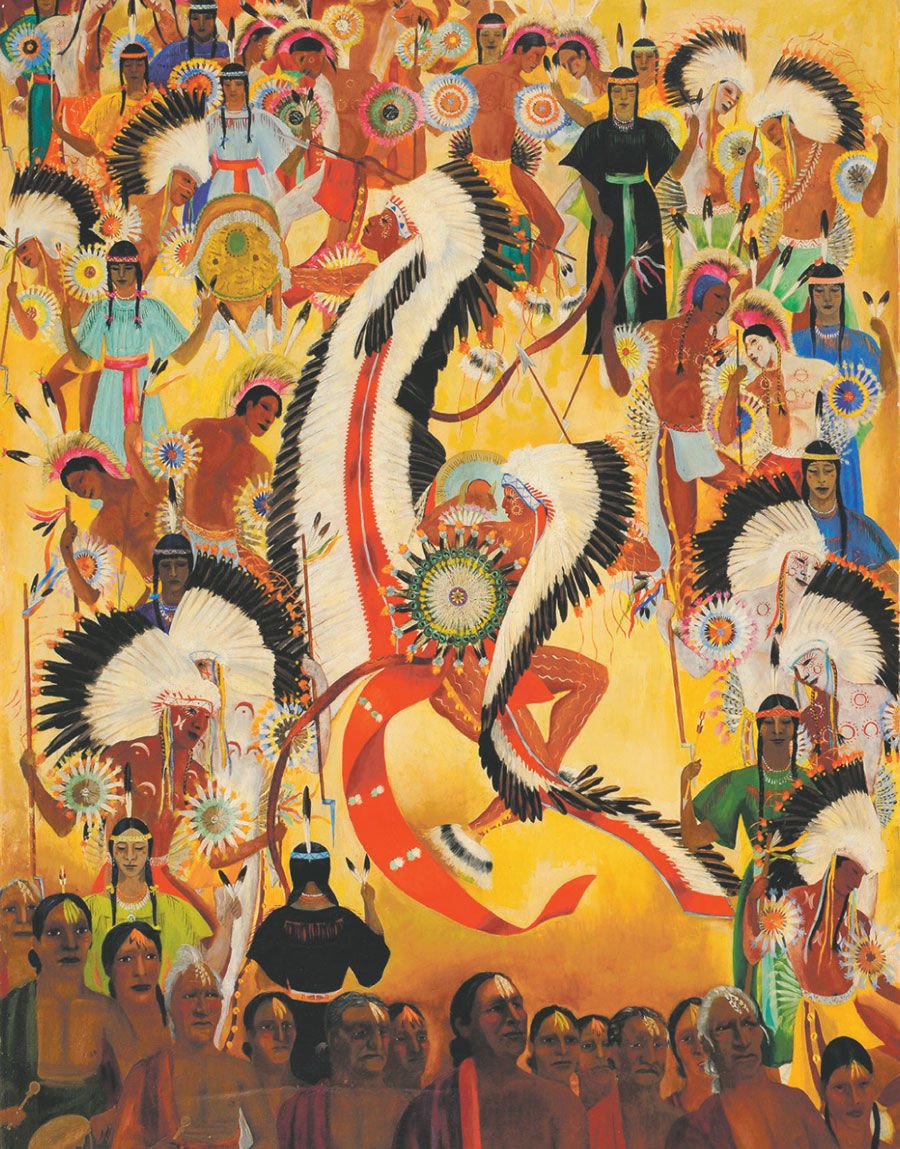 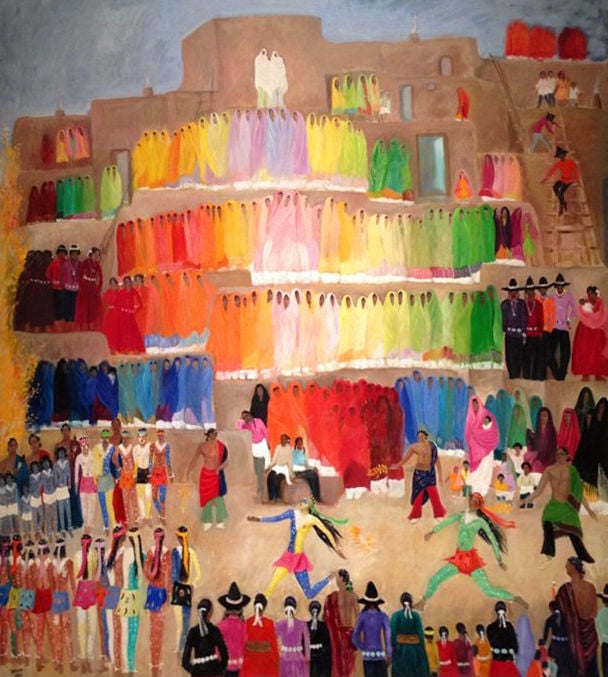 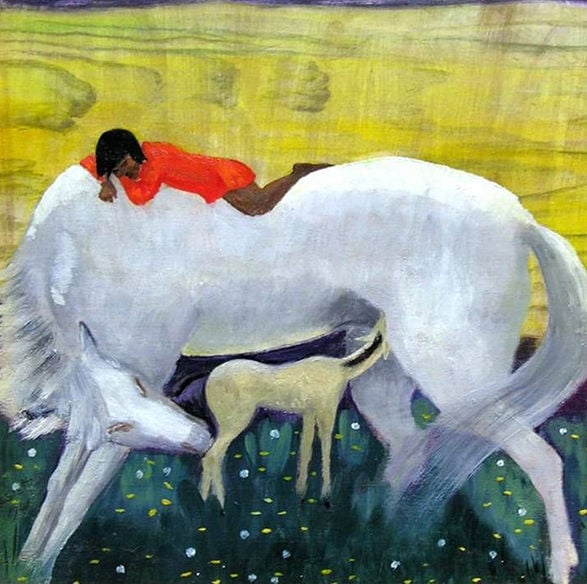 Remains of the day: Dorothy Brett, circa 1924, courtesy Museum of New Mexico Press

The ill will between painter Dorothy Brett, art patron and socialite Mabel Dodge Luhan, and Frieda Lawrence, the wife of author D.H. Lawrence — ill will that would eventually lead to Brett and Luhan concocting a harebrained scheme to steal D.H. Lawrence’s ashes — had been brewing for some time. The Lawrences first visited Luhan in Taos in 1922 at Luhan’s invitation and came again in 1924, this time with Brett in tow. Lawrence, Frieda, and Brett had come from England with the intention of establishing a literary and artistic Shangri-La called Rananim. Luhan, enamored of Lawrence and having met his attractive and ladylike wife before, was already nursing a jealous resentment toward her. According to Brett’s biographer Sean Hignett, Luhan transferred that resentment to Brett, whom Luhan described in her 1932 book Lorenzo in Taos as “an amusing and attractive grotesque,” adding that “her eyes were both hostile and questioning as she came slowly up to me, examining me, curious, arrogant and English.” Furthermore, Brett, who was partially deaf, used a small brass trumpet as an earpiece to better hear conversations, which added to her odd appearance.

Over the course of that April visit, Brett took to dressing in her own interpretation of cowboy style, sporting, along with her pocketbook, an ankle-length coat, a wide-brimmed sombrero, and a stiletto she kept tucked into her boot. “It seemed to give her great satisfaction, for she had secret fancies about assault,” wrote Luhan about the knife. An assault, of sorts, did come, but it was probably accidental; Brett was cutting Luhan’s hair with a pair of scissors one evening and clipped off the top of her host’s ear.

Despite this inauspicious start to their friendship, Brett settled that same year in a small cabin on a 160-acre tract of land on Luhan’s ranch outside of Taos. The land had been offered to the Lawrences by Luhan, probably in an effort to keep D.H. close. Luhan made the deal in exchange for one of Lawrence’s manuscripts. It was there at Lobo Ranch (later to be renamed Kiowa Ranch, and finally, the D.H. Lawrence Ranch) that Frieda, who was at first amused by Brett’s adoration of her husband, at least when in Luhan’s company, became, according to Hignett, increasingly annoyed with her constant presence. On a trip to Mexico with the Lawrences, an official at the Mexican consulate in El Paso mistook Brett for Lawrence’s wife, further fraying Frieda’s taut nerves.

orothy Eugénie Brett (1883-1977) was one of four children born into the aristocratic English family of Reginald Baliol Brett, the 2nd Viscount of Esher. Her mother, Eleanor Van de Weyer, was the daughter of a Belgian ambassador. Her sister Sylvia would grow up to become the Ranee of the kingdom of Sarawak in Borneo when she married Charles Vyner de Windt Brooke, the last of the White Rajahs, the dynastic monarchy that founded and ruled the kingdom. Brett, known as Doll to her family, enrolled at Slade School of Fine Art at University College London in 1910, against her parents’ wishes. She had no formal training but did have a talent for painting and drawing. Slade accepted her on a six-month probationary basis at first, and she was determined to become an artist. Her father eventually bought her a studio in Kensington. Brett had an independent spirit and took to wearing boys’ trousers and cutting her hair short while in school. Her partial deafness, the cause of which was never diagnosed, was pronounced by 1915, although friends suggested that her condition was more a case of selective hearing. “It may very well be true,” she recorded in her memoirs. “My deafness began at the time when I did begin to meet the engagingly frightening intellectuals who made up the world of painting and literature.”

Through an acquaintanceship with Lady Ottoline Morrell, a patron of writers and artists, she was introduced to members of the Bloomsbury Group, a circle of artists, writers, and intellectuals that included Virginia Woolf, art critic Clive Bell, and E.M. Forster. She met the Lawrences in 1915. D.H. Lawrence was already keen on establishing Rananim, his ideal community, only it was meant to be in Florida, not Taos. He took the name of the intended utopia from a Hebrew dirge he gleaned from Russian-born translator S.S. Koteliansky, one of several writers he courted in hopes of founding his idyll. “Rananim, in early 1915, received little support and much mockery from the chosen disciples,” Hignett writes. In the end, only Brett would follow when Lawrence moved to establish his dream in the Sangre de Cristo mountains, where, Hignett writes, “Utopia had a brief and bickering existence.”

In Taos, Brett turned her brush to the subject of regional Pueblos, inspired by the Native dances and rendering her subjects in brightly colored and tightly focused compositions. MaLin Wilson-Powell, art historian and co-curator of the Harwood Museum of Art exhibition Mabel Dodge Luhan & Company: American Moderns and the West, along with University of Massachusetts professor emeritus Lois P. Rudnick, writes that Brett’s painting Turtle Dance is claustrophobic, without any open space. Brett, not unlike Taos Society of Artists co-founder Ernest Blumenschein, was attracted to patterns and rhythms and, thus, the Pueblo dances appealed to her eye. She called the works based on them her “Ceremonials.” In the essay “Mabel Dodge Luhan: A New Way to See and New Things to Say,” included in the exhibition catalog, Wilson-Powell writes that Brett’s palette changed to pastel hues in the 1930s when she became obsessed with British conductor Leopold Stokowski, another of Luhan’s many guests and beneficiaries, and painted his portrait numerous times.

n 1930, D.H. Lawrence died at the age of forty-four in Vence, France. Brett hoped to purchase the ranch, but Frieda planned to keep it and transfer Lawrence’s remains there, with plans to commemorate him with a small temple. The spot Frieda chose was the same one Brett had intended to use for a new cabin for herself. Brett was forced to find a new location nearby and christened the cabin “The Tower Beyond Tragedy,” named for a line by poet Robinson Jeffers. Brett was stricken by Lawrence’s death, writing to photographer Alfred Stieglitz that she spent the entire summer with a loaded revolver in her lap. That fall, she began working on her memoir Lawrence and Brett.

Brett and Frieda, meanwhile, were still bickering. Frieda had not yet returned to Taos after her husband’s death. In letters she accused Brett of an affair. When she did return the following spring, she brought her future husband, Angelo Ravagli, an officer in the Italian Bersaglieri. When she saw this, Brett told Luhan she had just realized her greatest romantic mistake. “What Brett meant, of course, was that, in her eyes, the liaison of Frieda and the Capitano provided yet more evidence that it was only Frieda’s connivings that had hindered the course of real love and kept Brett and Lawrence from their true romantic destinies,” Hignett writes. By 1934, however, Brett, Luhan, and Frieda Lawrence were all on friendly terms again. But the debacle over D.H. Lawrence’s ashes proved the peace would be short-lived.

Hignett was told that the ashes, which Ravagli had traveled to France to obtain, were accidentally left on the train station platform in Lamy. That was one story. Another story was that the poet Wytter Bynner inadvertently overturned the urn while at dinner at La Fonda in Santa Fe and refilled the urn with the hotel’s fireplace ashes. There were also rumors that Luhan and Brett each did the same after secretly scattering the ashes in Taos, but the truth, while different, still remains a comedy of errors.

Brett wished to see Lawrence’s remains buried beneath a large pine tree that the author had loved. Instead, Ravagli built an ostentatious chapel to house them. Brett was critical of Frieda over this, as she felt Frieda should have treated the ashes more respectfully. She expressed her concerns in a letter to Una Jeffers, Robinson Jeffers’ wife, unaware that Luhan and Frieda were confiding in the same source. Brett suggested to Luhan that they steal the ashes. Luhan went so far as to recruit an ally and had every intention, it seems, of following through. Luhan let the plan slip, however, while cutting Frieda’s daughter Barby’s hair. Luhan’s plans were further compromised by Una Jeffers, who was relating Luhan’s and Brett’s letters to Frieda. Frieda responded by writing Luhan and Brett angry letters of her own, and interrogating Brett to get her to admit to the scheme. But “true to British diplomatic tradition,” wrote Luhan, “she denied everything.” Still, Luhan put the blame on Brett in order to protect her co-conspirator, a friend named Daniel Crispin.

Two years after the incident, Brett and Frieda were still no longer speaking (although they would eventually resume their friendship). The question of what to do with D.H. Lawrence’s ashes was, by then, a moot point. Ravagli had mixed them with cement for a concrete altar slab for Lawrence’s shrine, to be, as Hignett writes, “immovable, for ever.” Brett and Luhan boycotted the ceremony commemorating Lawrence at the shrine. ◀

Mabel Ganson was a rebel from the beginning. Born to wealthy but dour parents in Buffalo in 1879, she spent her teen years being privately educated and exploring her sexuality. Her adult life was dedicated to passionate affairs and using her money to build utopian artist communities, first in Florence, Italy, then in Greenwich Village, where she hosted salons; and finally in Taos, where she married Tony Lujan from Taos Pueblo. > READ STORY