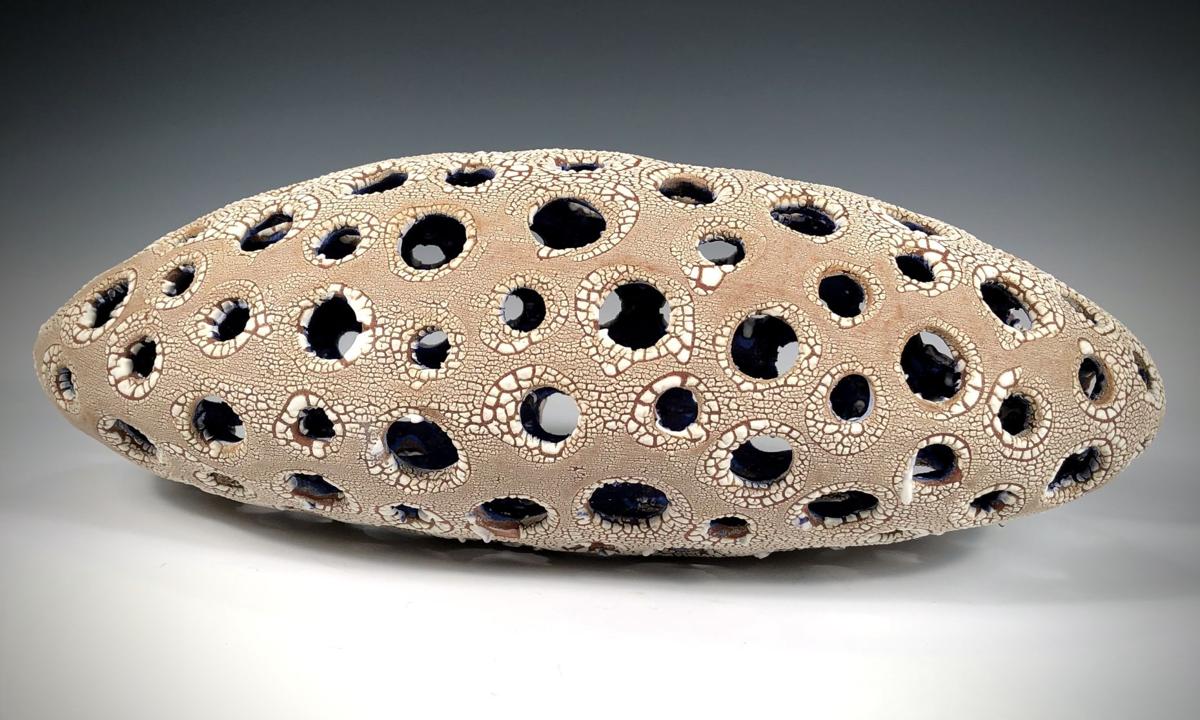 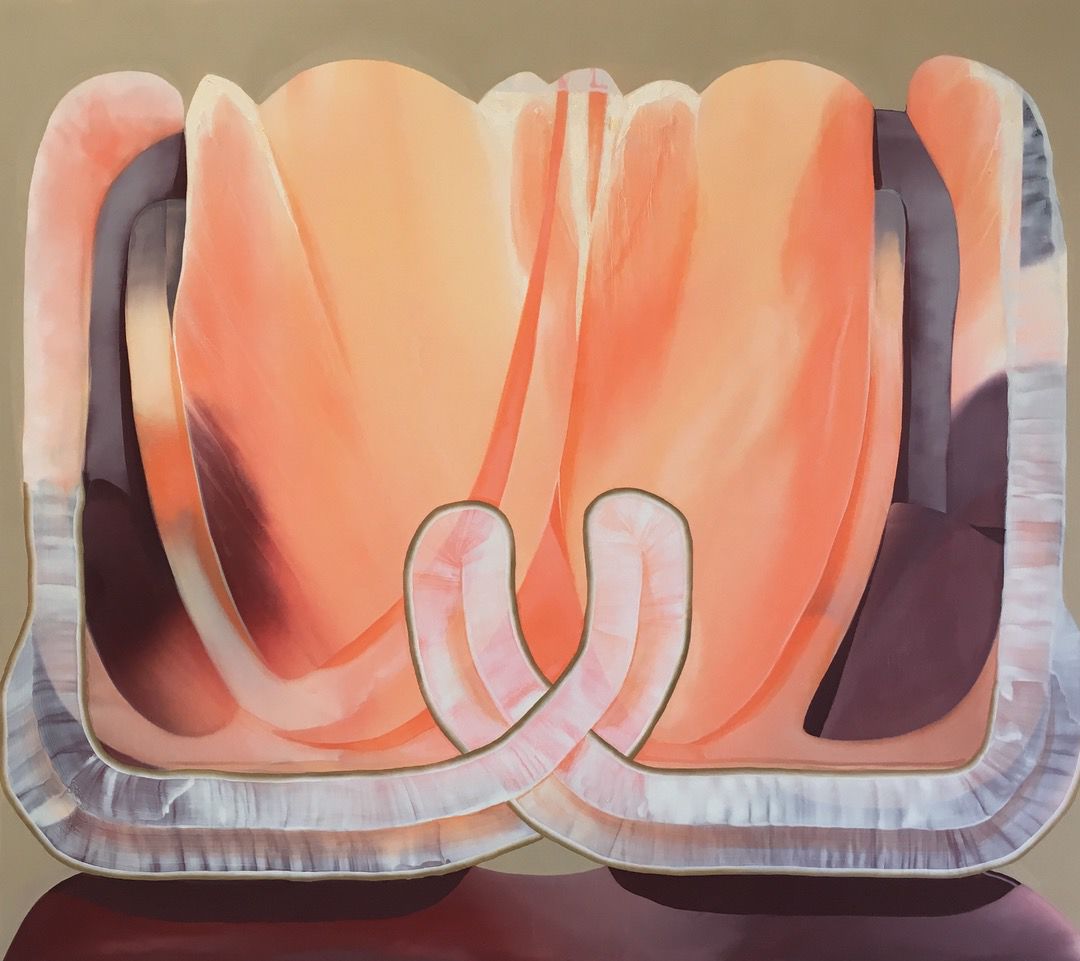 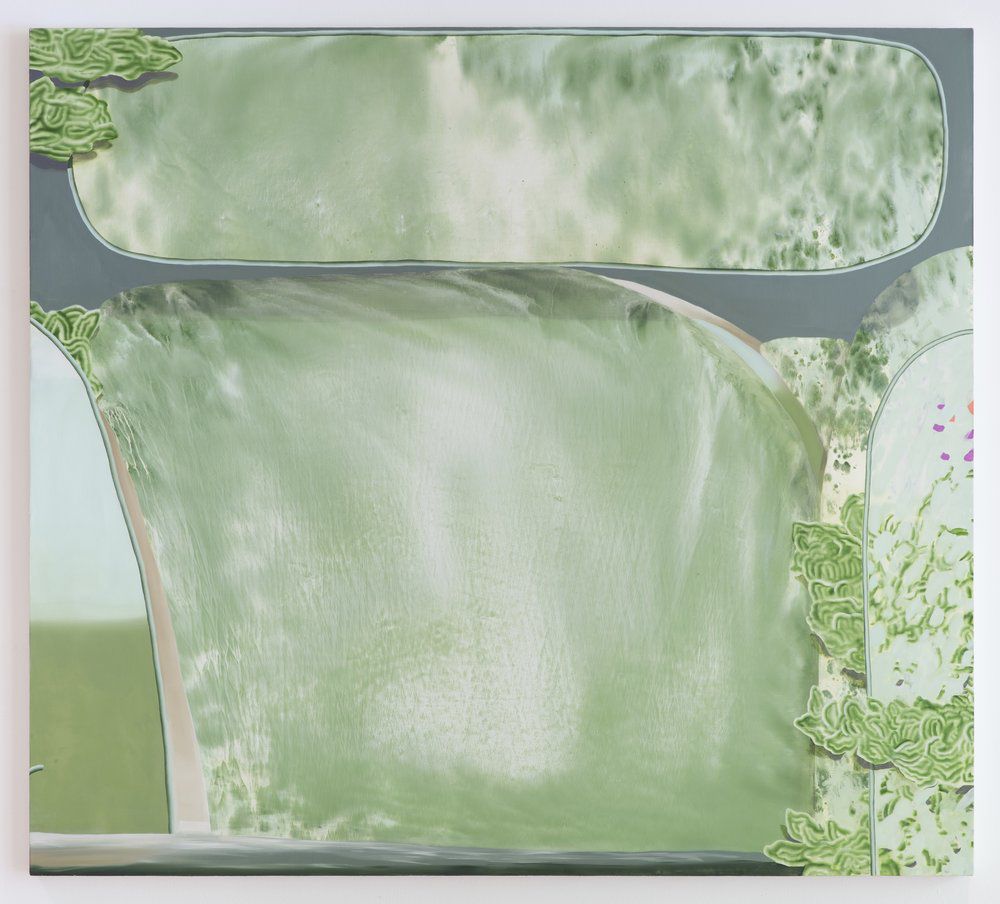 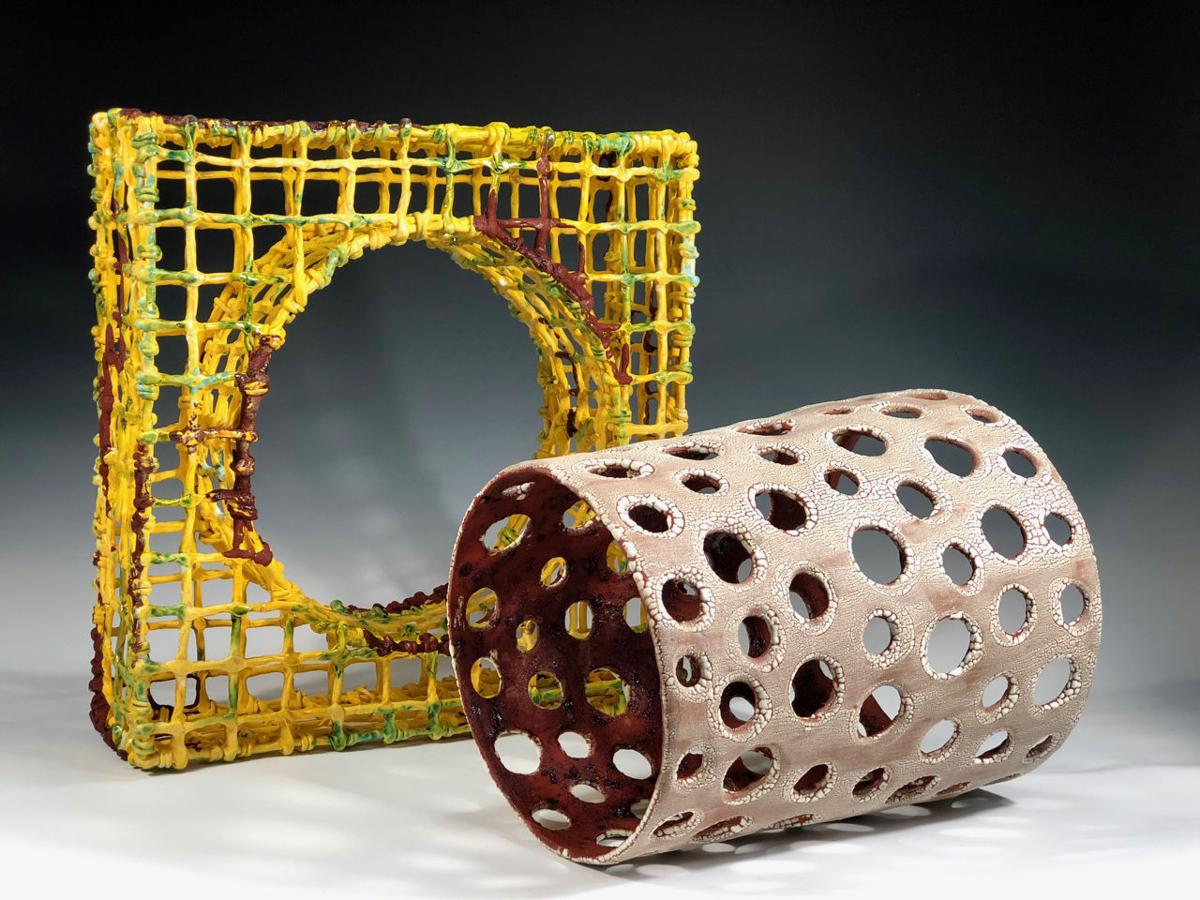 For their joint exhibit at Ellsworth Gallery, Amie LeGette and Courtney M. Leonard have created complementary bodies of work that, each in their own way, reflect artistic engagements with the organic world. In LeGette’s work, the engagement with the organic is tied more directly, albeit obliquely, to the human body. Her paintings touch abstractly on representationalism. It’s a style that’s implied rather than explicit, conjured through imagery evocative of organ-like appendages and atmospheric plains of color that are epidermal — not to mention titles that suggest landscapes. Mixed-media and ceramic artist Courtney Leonard’s focus is on the effects of overfishing and other environmental crises — juxtaposed with the traditional practices of the Shinnecock Indian Nation on Long Island. Her past works have dealt directly with the impact of the oil spills on marine life and threats to whale populations by examining what that means for humans — particularly, though not exclusively, indigenous peoples whose traditional lifeways are dependent on practices such as whaling and fishing.

Included in their exhibit, Nascent Atmospheres, are selections from several bodies of work by Leonard: Subsistence, Artifice, and, Abundance. The first and last depict handwoven basket forms in clay that suggest tools used for procuring food. Color is referenced in the titles, sometimes referring to environmental factors that impact fishing communities such as in her Subsistence (Red Tide). (Red Tide references naturally occurring concentrations of algae blooms, some of which have toxins that decimate fish populations.)

Paired with several of the basket sculptures are curvilinear objects that look as if they were drawn from the sea. These are all given the title Artifice but are differentiated by descriptive parenthetical subtitles, such as Cylinder and Ellipse. The word “artifice” is suggestive. It bears the same root as “art” in Latin. While the latter suggests craftsmanship, the former suggests deception and fakery. The Artifice sculptures are made using micaceous clay. There’s something raw, earthy, and organic about the material itself, as well as the seed-like shapes of the works in the series, but they are also objects of art, fashioned by a human hand, transformed from their natural state into symmetrical forms that convey an aesthetic allure. The woven basket-oriented forms of Leonard’s Subsistence and Abundance, as well as the micaceous ceramic sculptures of Artifice, are biotic, making visual reference to the living world even as they allude to human-made tools designed for a specific purpose among sea-dependent communities.

Leonard’s sculptures, overall, are uncomplicated, fragile-looking objects that, in their simplicity, complement LeGette’s luminous, abstract canvases. LeGette’s compositions appear biomorphic. In some, such as Ripe, long worm-like appendages occupy the foreground at the edges of a fleshy rectangular shape with rounded edges. They look intestine-like or perhaps more like umbilici (one of her paintings is titled Mother). The majority of each painting is taken up by large swaths of color, vaguely rectangular — ephemeral forms occupying a sort of mid-ground and that almost seem to be obscuring some unseen realm glimpsed in the edges of the compositions. They appear as forms in space, perhaps in a landscape environment. But the suggestion of bodily formations in the serpentine shapes of the foreground links the idea of landscape to the body. Titles such as Ripe and Mother, furthermore, also convey the notion that a landscape is a fertile ground. There is something mysterious, too, about LeGette’s paintings: The hint of physical planes or environments beyond their central shapes creates a sense of something hidden or veiled. The viewer has trouble defining what that something is because one can’t see it; conversely, what the viewer does see can’t be so readily defined. Her paintings are enigmas, and are all the more compelling for suggesting life in some transformative but as yet noncorporeal state.

If the exhibit title suggests something embryonic, then the works in the show convey this sense. In drawing parallels between the body and the environment, consider them as co-existing, dependent upon each other in symbiosis. This idea is not explicit in Nascent Atmospheres, but one doesn’t necessarily look to art for explication. Rather, we look to art for provocation — and that implies an occasion to consider, in something nebulous and ill-defined, the spark of an emergent idea not fully formed but nascent.