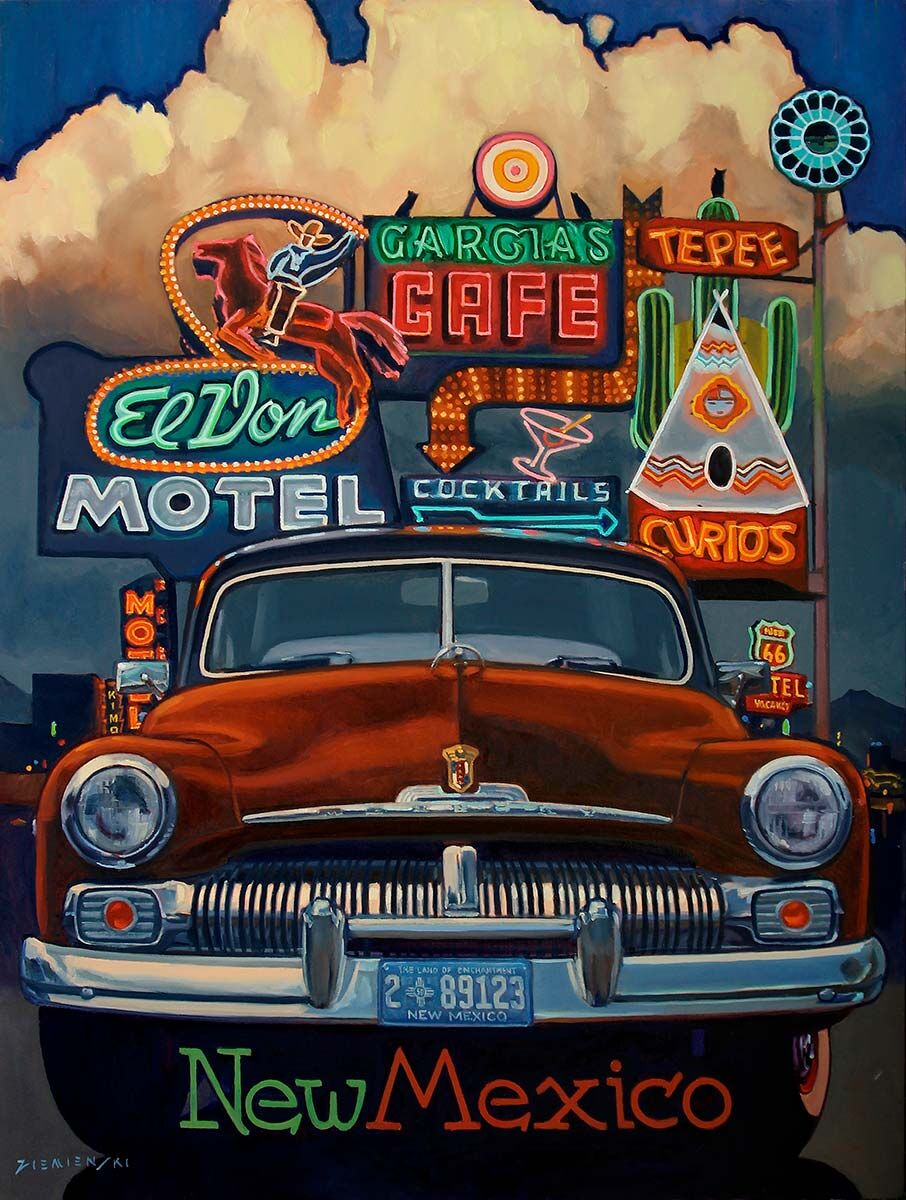 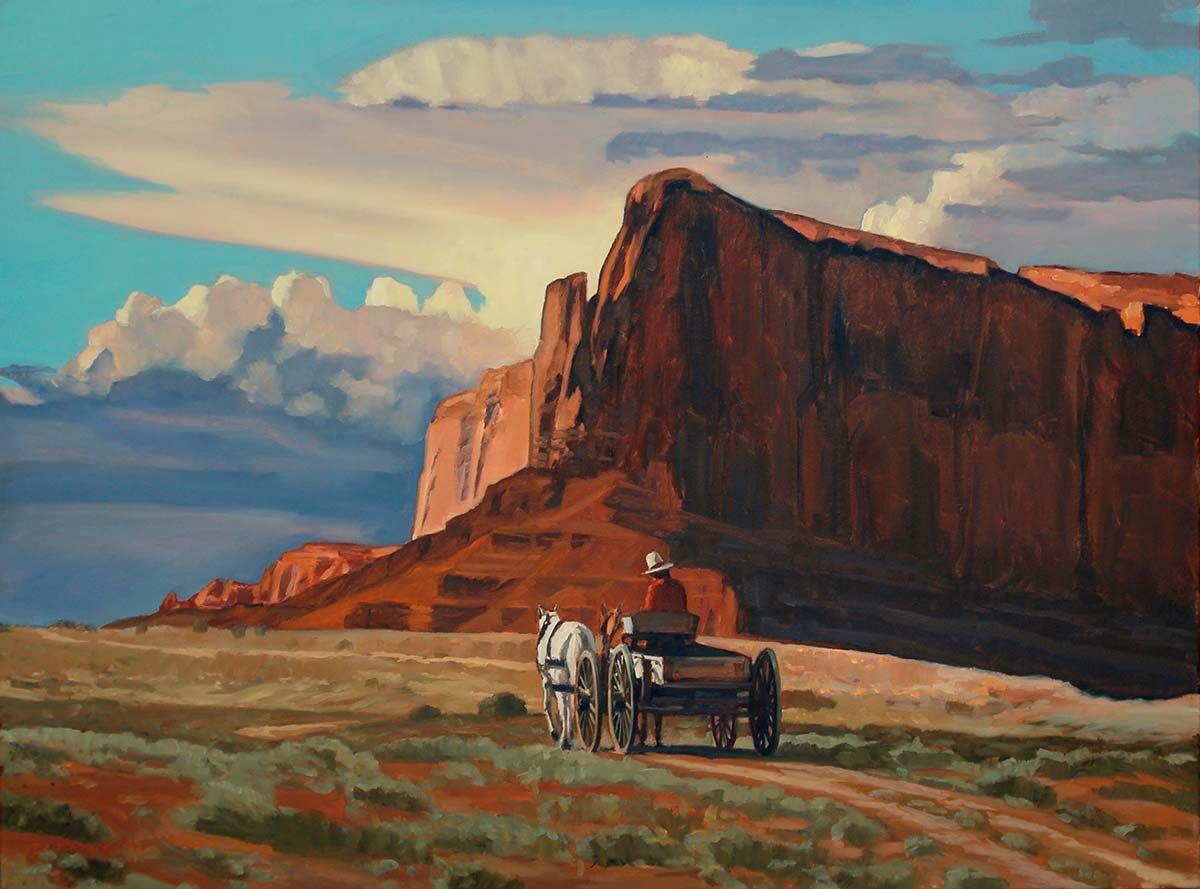 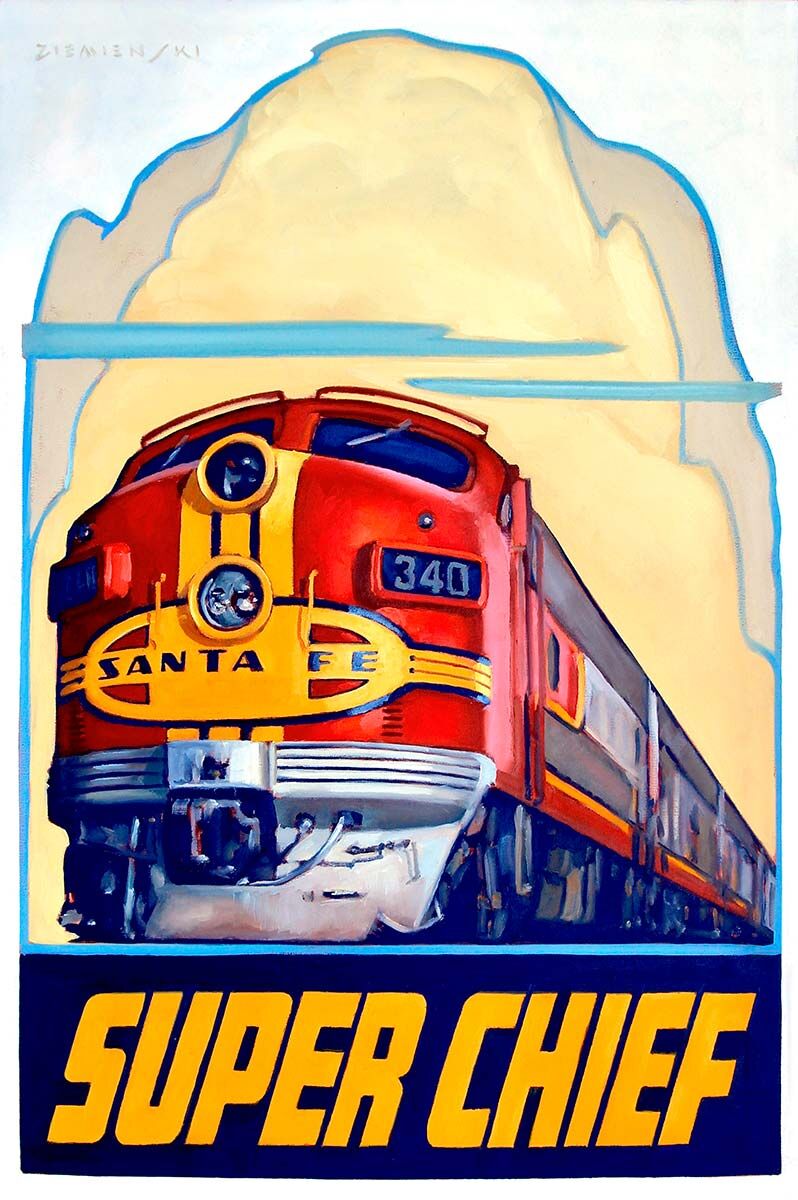 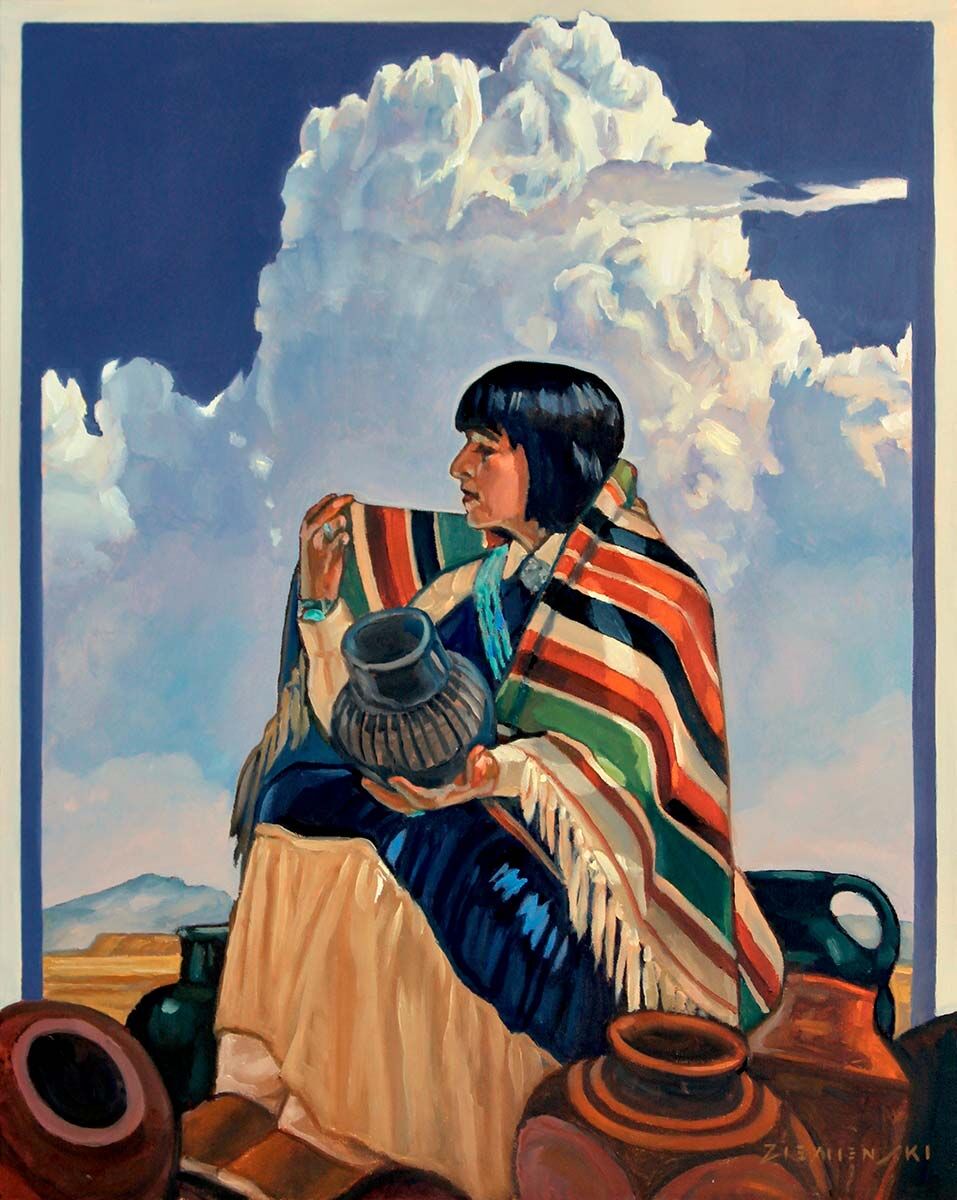 Dennis Ziemienski, Potter at the Pueblo (2021), oil on canvas

A man in a white cowboy hat drives a horse and wagon across a field. He keeps his back to the viewer of The Golden Hour, an oil painting by Dennis Ziemienski. The man’s reddish shirt is a shade or two brighter than the cliffs in front of him, which are half in sun and half in shadow. The ground is brushed with sage. On the horizon, a storm gathers.

The light in this 30-by-40-inch Southwestern landscape might inspire a viewer to look for a rainbow in the place where sun hits the darkening sky. But it’s just a little too early in the day for rainbows. This painting has an after-work feel to it. The man is going home.

Though The Golden Hour feels like a real place in time, it’s not. Ziemienski creates compositions from photographs he takes on road trips, well as vintage images. He also poses and photographs models when he needs to. “The cliffs were one thing, the clouds another, the wagon another,” he says during a video interview from his home in Glen Ellen, California. “I used to Xerox my photographs, cut them out with scissors, and put them all together. Grid it out. My daughter is a digital artist, and she taught me about Photoshop and Illustrator. Now I go in with jpegs and tiffs, enhance them, stretch them.”

Dennis Ziemienski: New Paintings, features 10 works made in 2021, now on view at Blue Rain Gallery. The 74-year-old Vietnam veteran launched his fine-art career in the 1990s, after three decades as a graphic designer, working in New York and California. He grew up in the Bay Area. When he was a kid, his parents took Ziemienski and his brothers on road trips through California and across the Southwest, where roadside attractions beckoned along the way.

“Refreshment stands in the shapes of giant oranges. Meteor City, somewhere in Arizona, where there was this space-looking stuff. We never stopped,” he says. “I didn’t get to stop anywhere until I was in my 20s.”

Blue Rain Gallery’s executive director, Denise Phetteplace, says that Ziemienski’s graphic sensibility ties his work together, but his paintings “cover a lot of bases. He has more serious, painterly landscapes, like The Golden Hour, and pueblo village scenes with Native peoples and their pots. Then there’s the Route 66 work. Some pieces feel like postcards or Depression-era travel posters. They all fall under one umbrella, which is his enchantment with the West and Southwest.”

Steeped in nostalgia, Ziemienski’s work is set loosely between the 1920s and the 1950s — what he calls the orange-crate era of advertising. Classic cars, neon signs, and horses populate his mesas and vistas. When he includes people, he often gives the viewer a worm’s-eye-view of them. The effect can be somewhat three-dimensional. In Song of the Trail, a singing cowboy plays guitar as he rides a white horse directly at the viewer. The cowboy is caught mid-verse, singing his plucky heart out. Ziemienski was inspired by figures like Roy Rogers and the more recent Coen Brothers’s Netflix Western, The Ballad of Buster Scruggs (2018).

“Playing guitar and riding a horse is a mystery to me,” he says. “Like walking and chewing gum at the same time.”

When he first changed careers, Ziemienski tried to put away his graphic-design training in favor of being a “fine” artist. But after about 10 years of that, collectors were asking to purchase his old advertising sketches, and he realized that the commercial vs. fine art battle was pointless. “A strong composition sells. … I decided to throw away those preconceived ideas, to do what was in my heart, and what I love doing. Even if it seems to be like commercial art — it’s art.”

Ziemienski usually cites four illustrators as direct inspirations: Americans J.C. Leyendecker (1874-1951) and N.C. Wyeth (1882-1945), Germany’s Ludwig Hohlwein (1874-1949) and British poster artist Tom Purvis (1888-1959). “None of these artists do I worship entirely,” he says. “Hohlwein took blocky color shapes and made them into imagery. I think it was due to the printing capabilities at the time. And Purvis. Both those guys put together images that hit you right in the face, just the starkness of the design. Leyendecker redesigned shapes and faces and still made them look like readable characters. He put edges on things, and he used the worm’s eye view. N.C. Wyeth was more painterly than the other guys, who were more design-y. I wanted to bring a bit of him into my work. But his subject matter isn’t my subject matter. I’m not into war at all. There’s nothing glorious about that.”

You can see the individual influences of each man, but Ziemienski synthesizes them into a unique style that tends toward realism while being both humorous and romantic. He says the closest he comes to abstraction is when he paints neon and clouds — both of which appear in New Mexico Lights. The subject coming through the frame is a shiny maroon 1950 Mercury Monterey. A cluster of neon signs behind it advertises motels, cafés, and curio shops. A bank of clouds, dense as wildfire smoke, billows in the sky.

“I love lit and non-lit neon because of all the shadows that it makes. And you can do anything with clouds. They’re every color, not just white or gray. Blues, pinks, greens. You can really go wild, and it will still look like a cloud,” he says.

Among his panoply of Western subjects are Native Americans, sometimes with their artwork or on horseback. In these compositions, Ziemienski resists sentimentality or exoticization. In Potter at the Pueblo, a woman adjusts the striped blanket around her shoulders with one hand, while holding a black ceramic vase in the other. At her feet are more pots. Her facial expression is neutral, absorbed in the mundane and momentary task at hand. It could be a snapshot taken on a road trip or a moment of repose for an artist at Indian Market.

“I’m fascinated with the Pueblo people and the Navajo people. Their buildings and their arts and crafts are just wonderful,” he says. “I don’t get into sacred stuff. I depict the figure and the craft, and maybe a pueblo building — but I won’t go into kachinas or [religious] symbols. I just paint what I see, the same as I would portray people anywhere, in Los Angeles or Chicago.”

But Ziemienski’s love is the West, where the scenery begs to be recorded in vibrant color, so he’ll never run out of subject matter. “Canyon de Chelly, Monument Valley, and all the places in between that can be manipulated and made more than they actually are. You can really work with it,” he says. “You can put in clouds or, what really works in a landscape is putting a figure in it, an object to show scale. If you don’t show the scale, it’s ho-hum. But if you show how tiny the horse is compared to those cliffs, that makes a painting powerful, whether it’s mine or someone else’s.” ◀