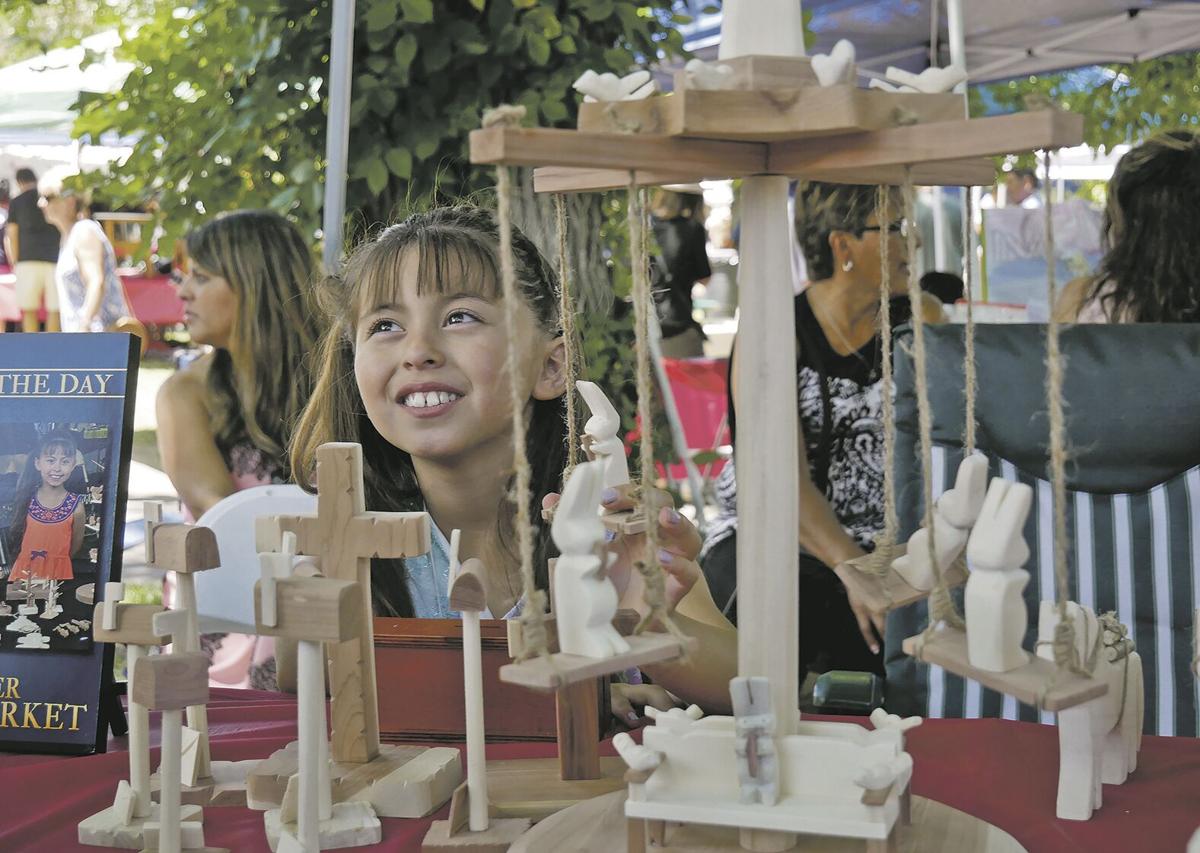 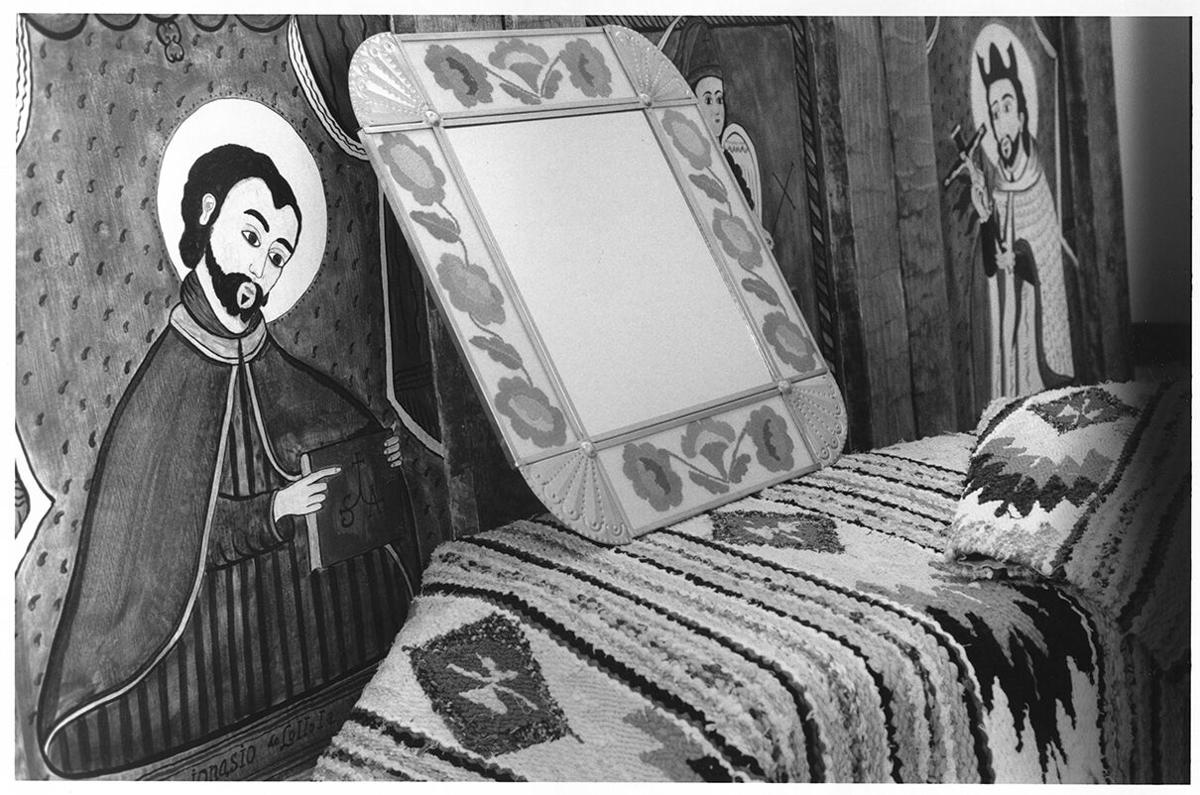 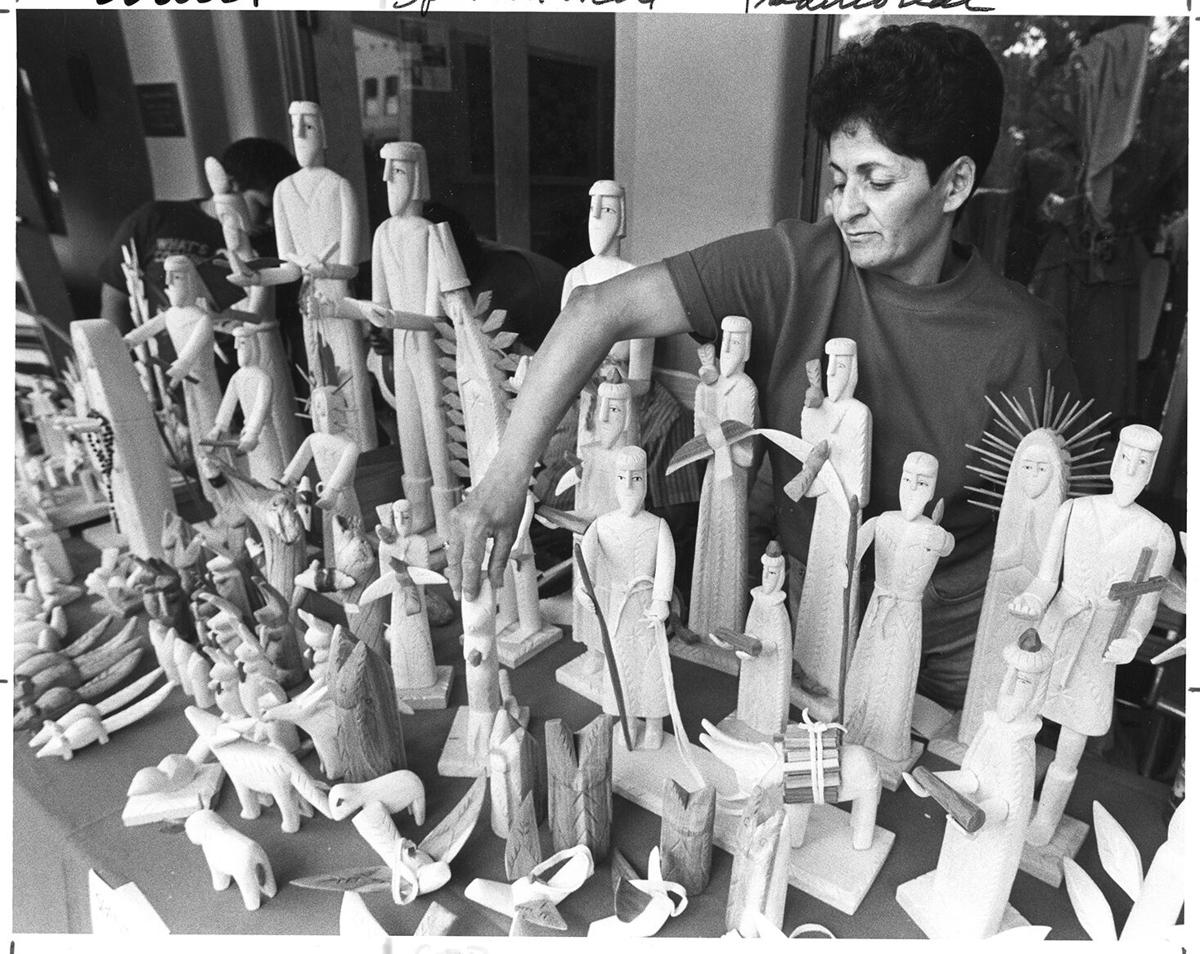 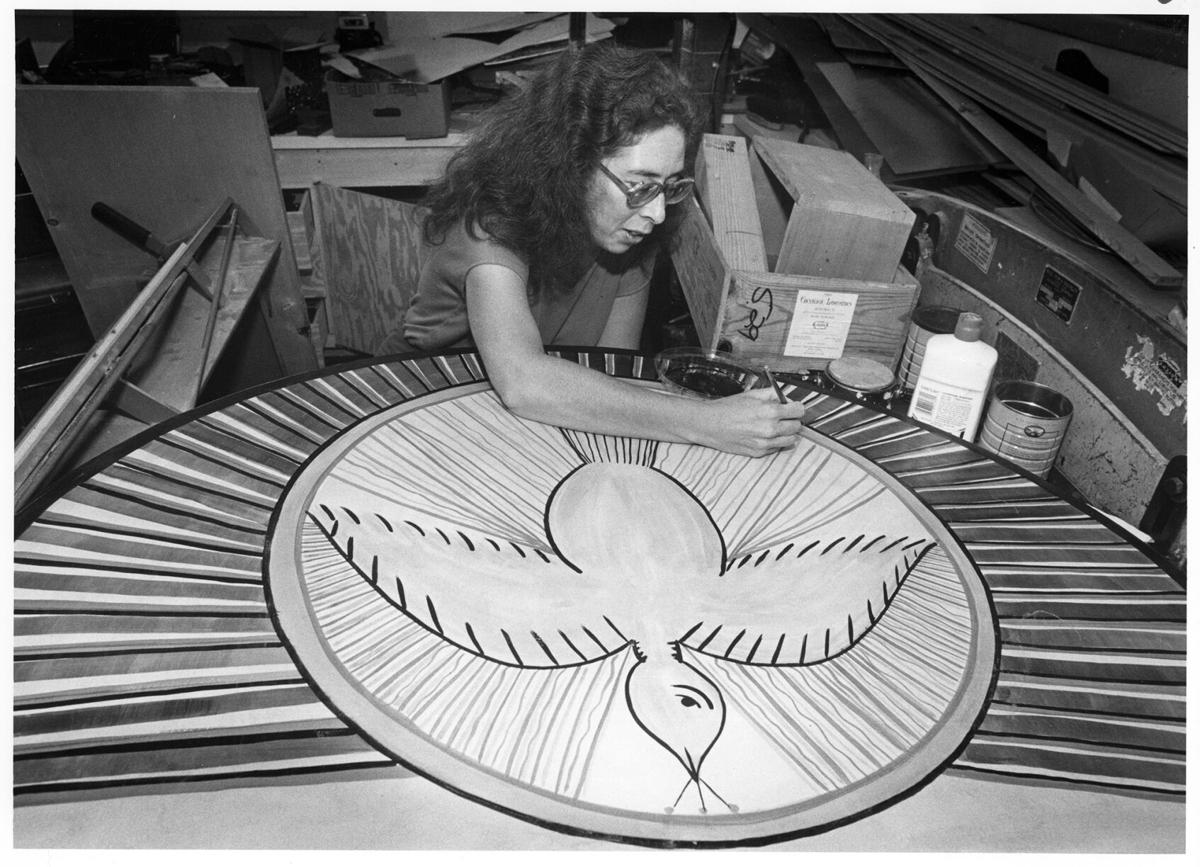 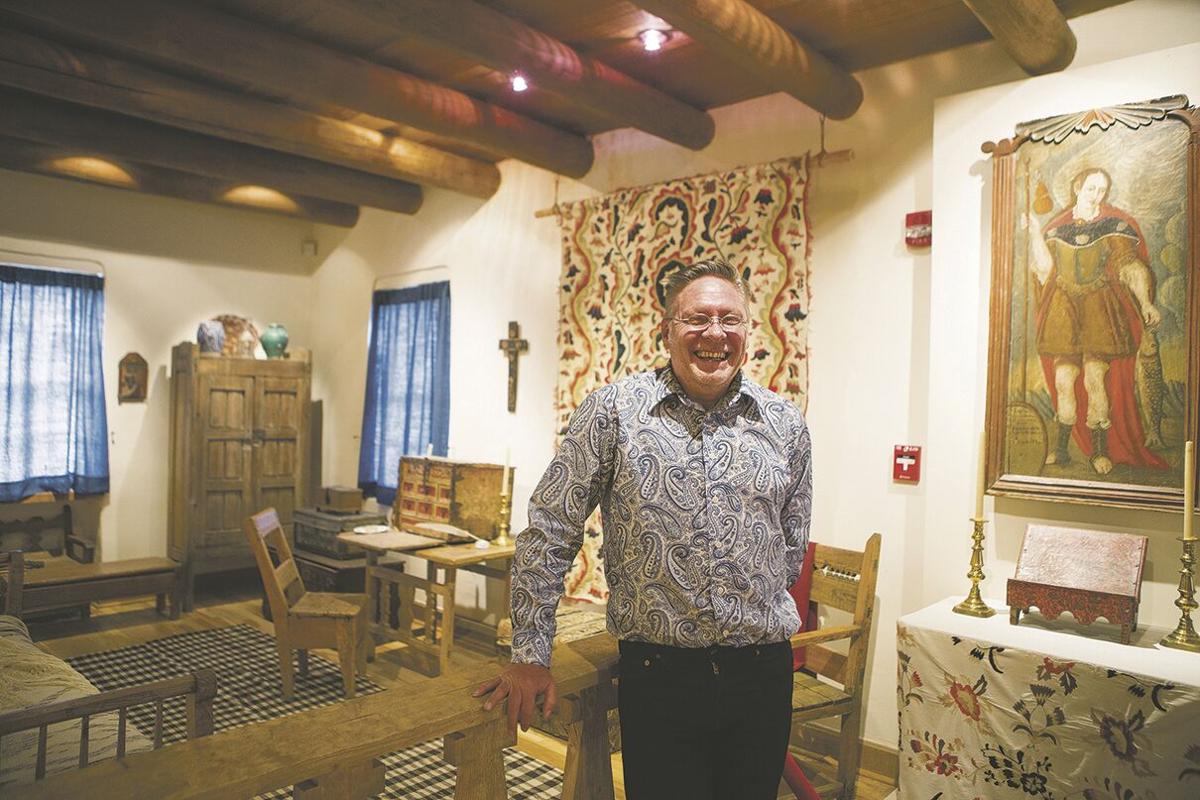 The new deputy director of Spanish Market, David Rasch, poses for a portrait in his "favorite room" at the Museum of Spanish Colonial Art, photo Olivia Harlow/The New Mexican 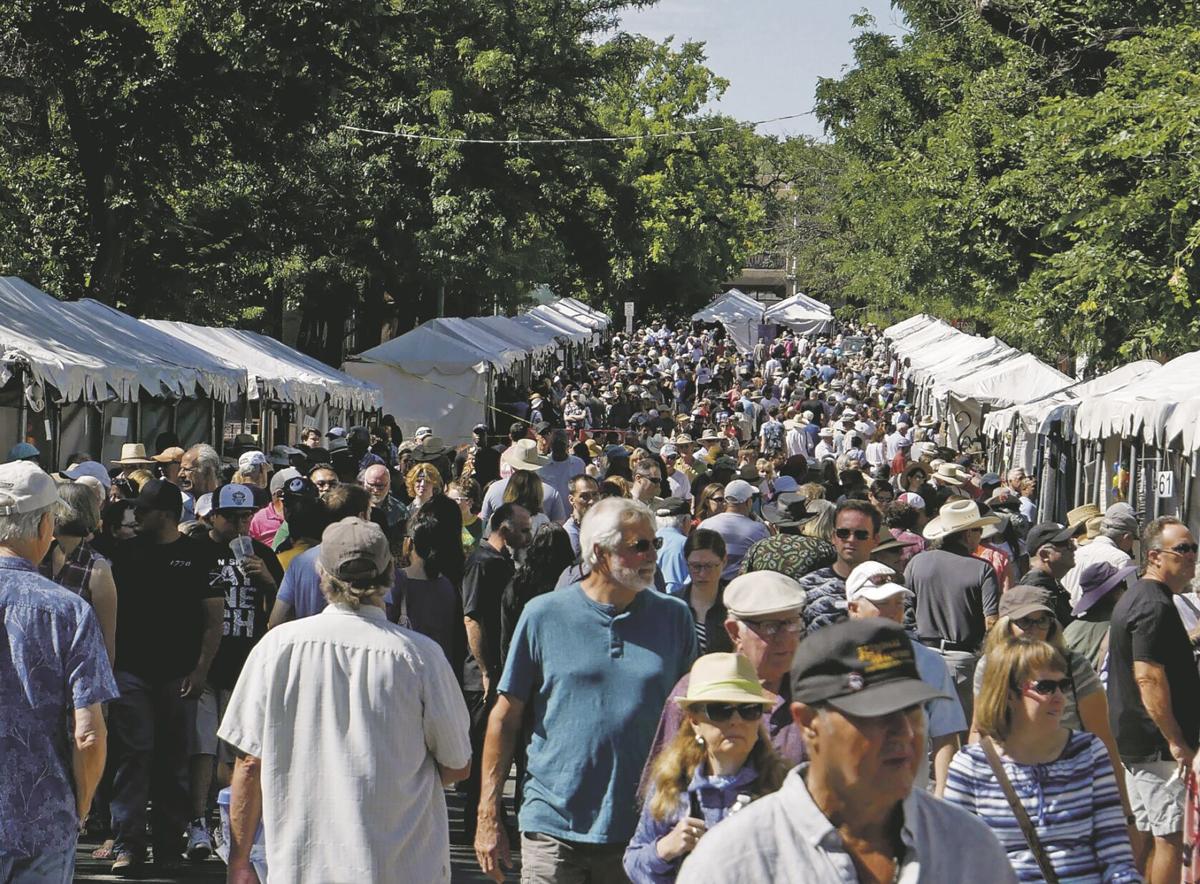 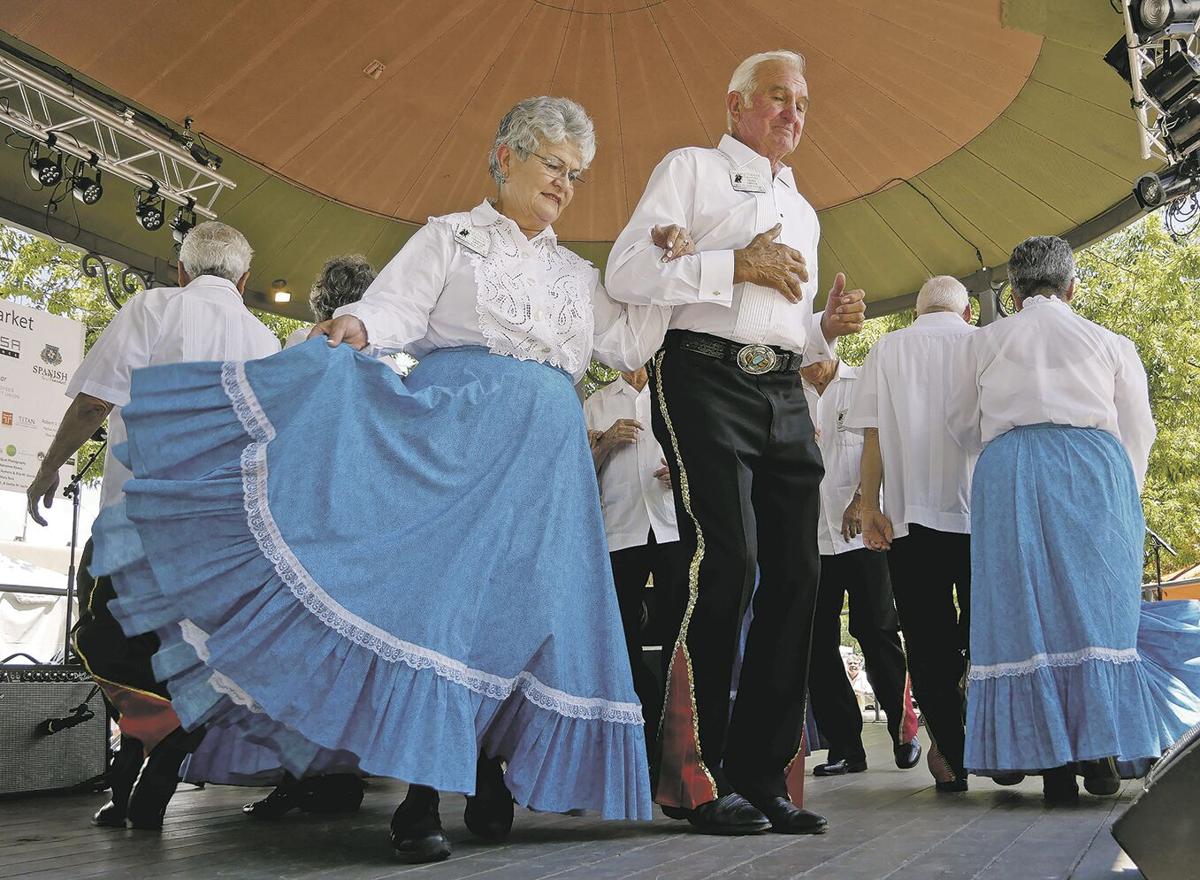 The new deputy director of Spanish Market, David Rasch, poses for a portrait in his "favorite room" at the Museum of Spanish Colonial Art, photo Olivia Harlow/The New Mexican

Coming on the heels of the annual International Folk Art Market, Traditional Spanish Market, normally slated for late July, is a cultural festival with roots that lie closer to home. Produced by the Spanish Colonial Arts Society since 1926, the market highlights the living traditions of Colonial-era arts in New Mexico and the significant contributions of the state’s Hispanic artists.

In its first year, when it took place during the annual Santa Fe Fiesta, only 11 artists were featured. In more recent years, that number has swelled to about 200 registered artists, with about 160 of them exhibiting annually.

This year, there are none.

When the Spanish Colonial Arts Society made the announcement that the 2020 market, which would have been the 69th, would be canceled due to the pandemic, it was blow to local santera Marie Romero Cash, who’s 78 and has been exhibiting at the market for 45 years. “It takes lots of months of preparation for all of us,” says Romero Cash, who’s an authority, and the author of several books, on the art of the santero, or “saint maker,” and the historic churches of Northern New Mexico. “I had already started: preparing, mapping out stuff, carving, and getting ready to paint.”

For Romero Cash, the cancellation of the market and, subsequently, Winter Spanish Market, which takes place in December at the National Hispanic Cultural Center in Albuquerque, means a loss of about half of her income for the year. “It makes for a pretty bleak outlook for many artists, including myself. Everything has affected the artists, including the artists under the portal,” she says, referencing the Native artists who sell their art year-round under the portal of the Palace of Governors. “I have friends who sell there, and for many of them, that’s their only income.”

Although the Spanish Colonial Arts Society isn’t running a virtual market in lieu of the annual in-person event, like IFAM and Santa Fe Indian Market, it was something they considered. “We realized that Traditional Spanish Market is so much more than wonderful art,” Deputy Director David Rasch says. “It’s the music, the food, the costumes. Online, that ambience about the cultural experience is hard to get, and it’s such a good experience when you do it in person. That’s why we decided not to replicate it. The only thing we’re missing out on is that the artists aren’t able to sell their work.”

With the cancellation of the market and the state-mandated closure of the Museum of Spanish Colonial Arts, the society made the difficult decision to lay off six employees. The museum, located at 750 Camino Lejo, on Museum Hill, currently has just three employees, including Rasch and Executive Director Jennifer Berkley, who started in early May.

They haven’t been idle.

“We are doing a complete re-launch of our website,” says Berkley, who took over from Acting Director Alex Romero. Berkley came to the institution after three decades of professional experience in nonprofit administration, most recently at the historic Acequia Madre House. She’s also on the board of the Southwestern Association for American Indian Arts. “It’s going to prominently feature all of our artists, which was never done before.” The online artist pages, which they plan to start building in the next few weeks, will be an ongoing feature of the website, and new artists will be added as they become registered market artists. “We hope that, on our end, what we’re doing will help because it will definitely give them exposure in ways they may never have had.”

When the pandemic hit in March, Rasch, who also serves as market director, was just about to launch the applications for this year’s event. “We had already set up our bandstand, but I didn’t get any contracts out, so it was good timing because I didn’t get any money in yet that I’d have to reimburse.”

Still, he had to break the news to the artists. “Everyone was sad, but I got a lot of comments saying thank you, our health is that important.”

“Had they not made that decision and proposed some kind of modified market, I would not have attended,” Romero Cash says. “Whether you’re 70 or 20 or 10, there is no reason to expose yourself unnecessarily.”

In the decades since the first market, which was held at the New Mexico Museum of Art under the auspices of what was then called The Society for the Revival of Spanish Colonial Arts, Spanish Market has become a staple summer festival. In recent years, it’s drawn as many as 95,000 visitors annually and generated as much as $41.6 million in direct spending in the local economy.

“Now that we have this downtime, we’re also planning on working with the artists on improving the guidelines for the market,” Rasch says. “Our standards committee and the artists have always said it’s not that clear.” In addition, Rasch plans to provide detailed explanations of the market’s 18 juried categories and their significance to Spanish Colonial art. These include painted bultos, retablos, ironwork, copper engraving, weaving, precious metals, and innovations within tradition. The latter category was added in recent years to enable contemporary artists who use less traditional techniques and materials to exhibit their work. But when the market revives its public event, hopefully in 2021, the innovations category may disappear and, instead, become part of all the others. “So, we’d have the historic, modern, and contemporary in each category.”

Rasch and Berkley are also reimagining the visitor experience to the museum and making it safer, although they don’t yet know when they’ll be able to reopen.

“I know for myself, when I used to be a guest visiting here, I only understood it to be the museum part,” Berkley says. “I didn’t realize that there were all these other features that I could have had access to as a guest, to learn.” These include the collections area and the research library. “We want to make all of these features more available to them and get the artists more involved in how we do things here onsite, and not have their involvement limited to just the summer event or winter event. We had a great experience recently where an artist, who’s been in the market for six or seven years, had come to do some studying in our collections with David and learned something totally new in his field. It was this aha moment that was really great to see. I thought, Wow, what we have here is really valuable for people. It’s just that they’ve got to know that they’re welcome to come in.”

The museum has never had a formal mentorship program for its market artists, but it has the resources onsite to make it happen. “I feel that studying our collections and our research library as part of becoming a Spanish market artist is a good idea, especially for the youth,” Rasch says. “When a Youth Market artist graduates to get to the adult market, part of that would be studying our collections for the category they’re in, to be more familiar with the traditions. We want to see it as more of a center for research and not just an exhibit gallery.”

“We have this vision of making our site more accessible and open to everybody, all of our visitors, and all of our constituents,” Berkley adds. “That’s really what we’re here for.” ◀

Maddening? Really? In big, bold headline. You should be embarrassed SFNM.

The phrase is 'Far from the *madding* crowd'. It's from the poem “Elegy Written in a Country Churchyard,” by Thomas Gray

The same care and study goes into how young people today form their political opinions.