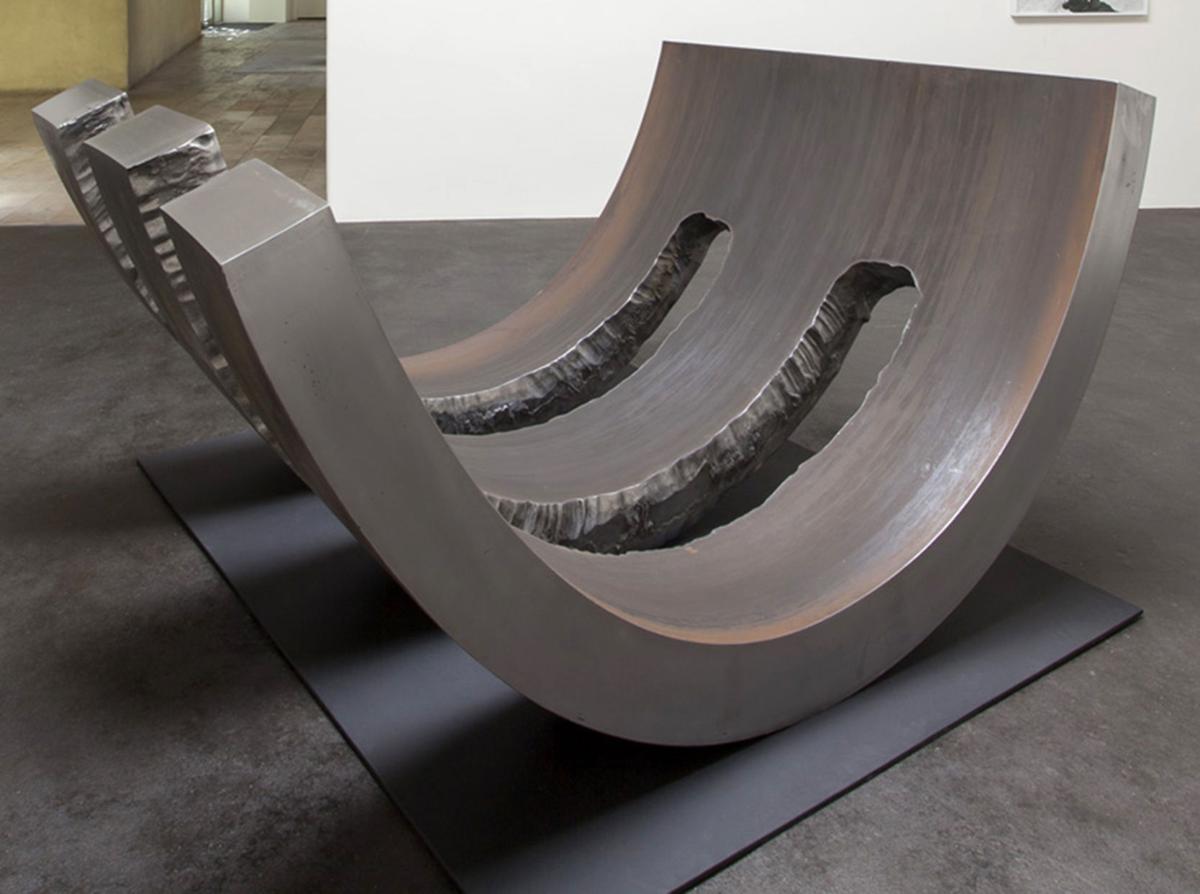 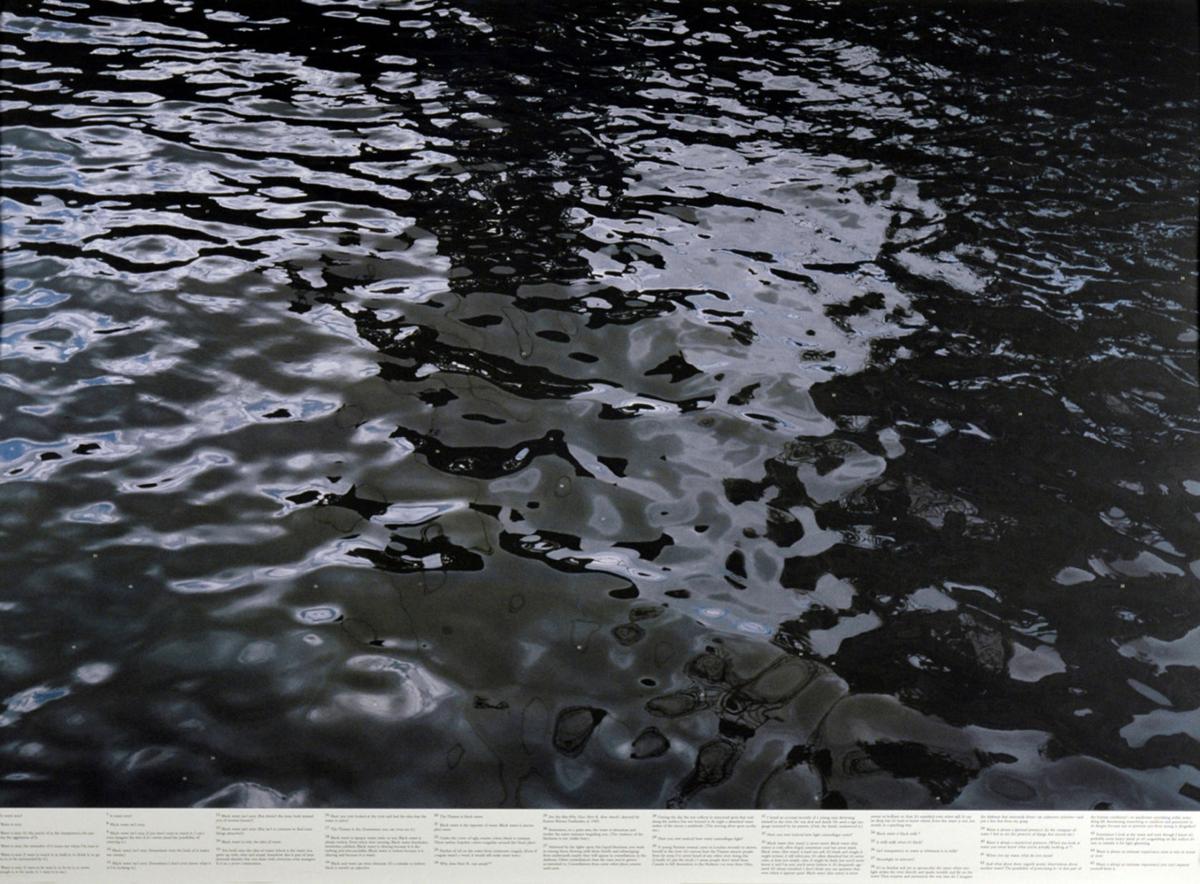 Roni Horn: Image I from the series Still Water (The River Thames, for Example), Image I, 1999, offset lithograph on uncoated paper 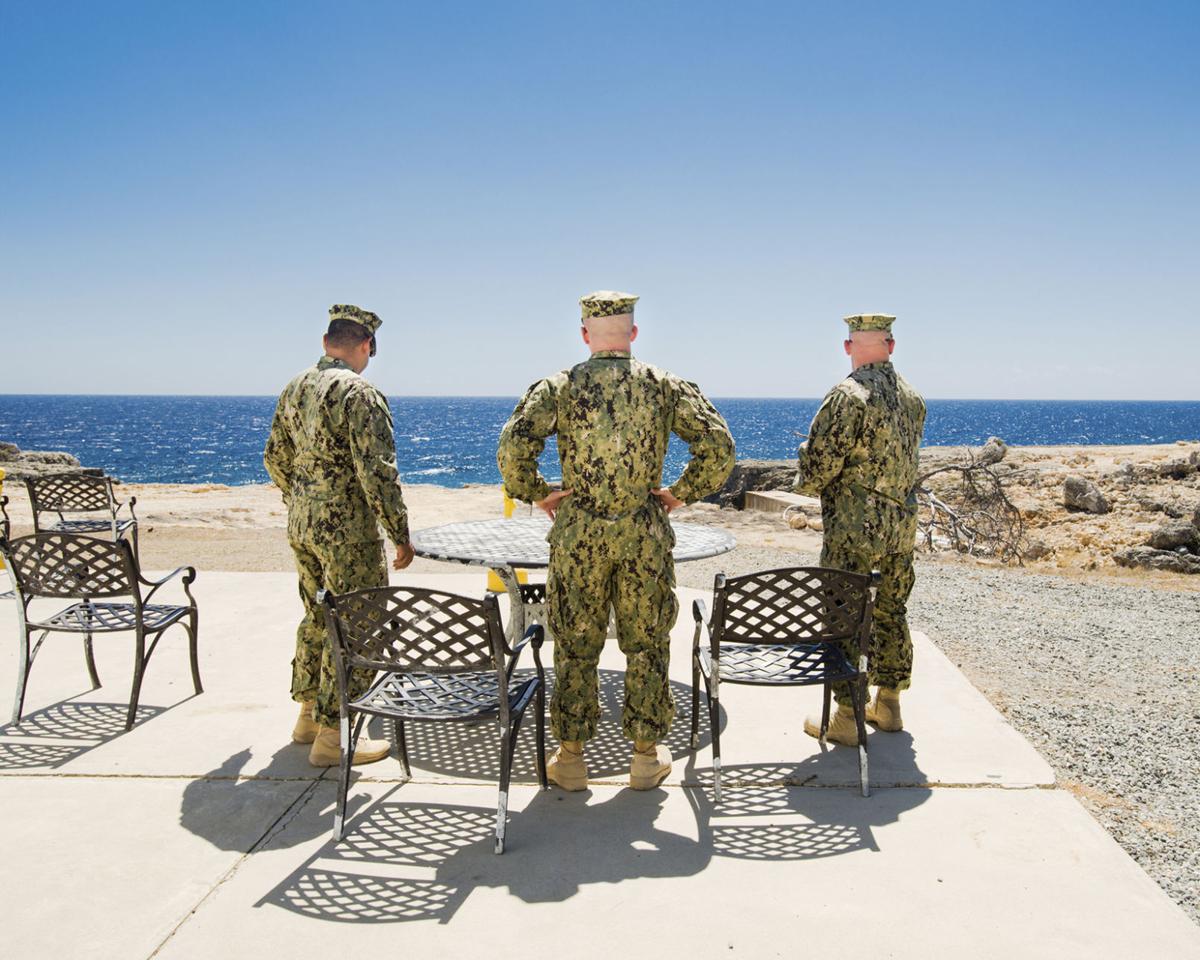 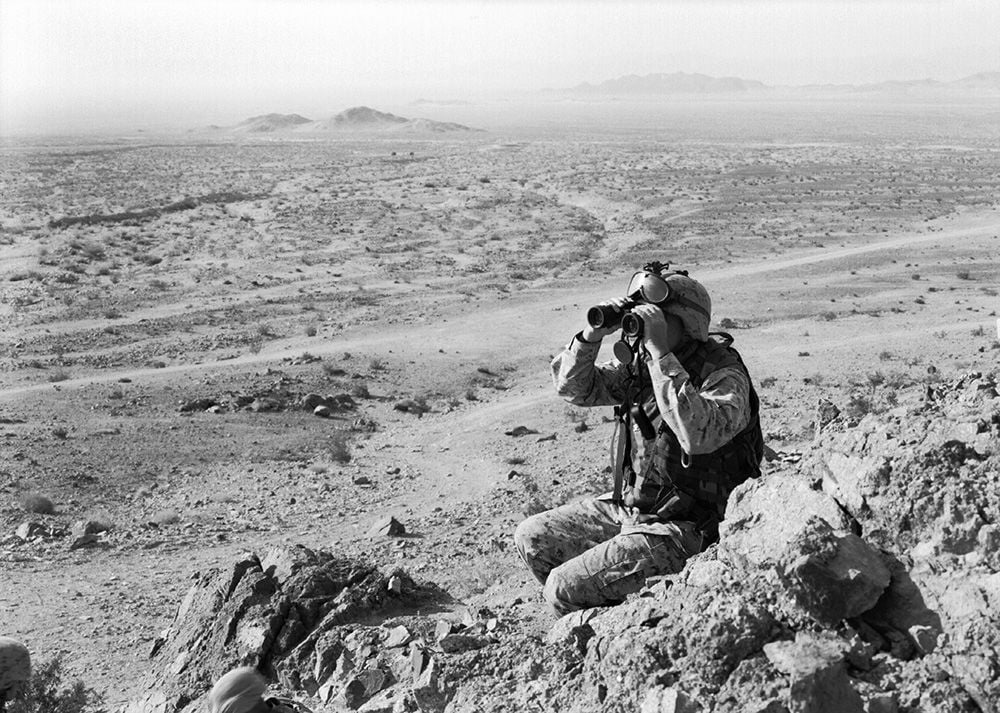 Roni Horn: Image I from the series Still Water (The River Thames, for Example), Image I, 1999, offset lithograph on uncoated paper

In his book London: The Biography, writer Peter Ackroyd discusses the city as a living, breathing entity — as though, like a person, it has a body. If it does, you might think of the River Thames as its aorta, but in considering the work of photographer Roni Horn, the Thames seems more like a hungry mouth. Of the 605 footnotes that run along the bottom edge of Horn’s offset photo-lithographs of the Thames, 41 are about suicide. “The Thames has the highest rate of suicides of any urban river,” reads one footnote. “Maybe it’s not the highest but it’s close. It doesn’t really matter because even if it doesn’t, it looks like it does.”

The Thames is often referenced in Horn’s footnotes, but in the images, the river is indistinct from other bodies of water. All the shots in her series called Still Water (The River Thames, for Example) are close-ups of the river’s surface. The numbers that correspond to the footnotes are spread, seemingly at random, throughout each composition. Although the footnotes reference events such as suicides and drownings that actually occurred, the corresponding numbers in the imagery all rest on the same uniform body of water. We see only its surface. The rest is mystery. The Thames’ many victims, whether suicides or not, are swallowed whole with a frigid indifference. “It will be cold,” goes one footnote. “Even in the summer the water is cold. It lingers on — the cold of unabating darkness.”

Horn made 15 images for the series, 10 of which are on view in Something Fierce, a show of works by eight women artists selected from the Lannan Foundation’s art collection with a few additional works on loan. “I came up with the idea for the show on Inauguration Day,” said curator Christie Davis, director of Lannan’s contemporary art and public programs. “I was feeling a little disempowered and wanted to do something that I thought would be a powerful statement, and so I thought about some of the women in the Lannan collection and how the work that they do is amazing, brave, and fierce.”

Along with Horn’s images, Something Fierce includes works by photographers Sharon Core, An-My Lê, Sarah Pickering, Debi Cornwall, and Victoria Sambunaris and sculptures by Christine Corday and Munson Hunt. Corday’s metal sculpture NOVAE is the focal point of Lannan’s small interior gallery. The piece is a rectangular slab of metal that has been curved into a U shape. It’s sliced through with two rough-cut channels that start close to one side and extend all the way through the opposite edge so that the work appears pronged, like a fork. Corday explains the contrasting elements of the piece, which appears more substantial or solid on one side than the other, as expressing a sense of balance. “Works like these are from a series I call Protoist Series,” she told Pasatiempo. “The cuts are suspending, for a moment, this material between two states, which are solid and liquid.” The curve of the sculpture is a recurring motif that appears in all of her Protoist forms. “That comes from a long interest that I have in sciences and art,” she said. “The curvature comes from the curvature of space, which is something that’s not quite fully understandable the way our senses have evolved so far. So there’s a lot of play here between the senses and material states.”

Corday’s Protoist sculptures are all large scale, but as she pointed out, the scale is relative. “These pieces, hopefully, will evolve and challenge and help further define what the sense of human scale is,” she said. “Oftentimes, I think we limit human scale with our senses to that which we can grasp and understand. But our senses have come from something that’s infinitely old, that’s been in the stars, that’s exploded twice into supernovas. What has informed the cells of our bodies actually has known a far greater scale.” In terms of its physical composition — the piece is made from iron, carbon, silicon, manganese, phosphorus, sulfur, and other elements — NOVAE also points to the cosmic conflagrations in which such substances were originally forged. It also has the potential to be interactive. It is designed to rock like a cradle and to capture the traces of those who have touched it, climbed on it, and scarred it, so that its interaction with the world around it becomes a part of its history, which can be read in the fingerprints and tarnished surface it gains over time.

Hunt’s exploration of materiality involves exploiting the ability of one medium to mimic another — or, as in the case of Charred Ball, to transform it. Charred Ball is a round hunk of Douglas fir that has been burned, resulting in pits and cracks. Another piece, Charred Glass Slab, positioned in front of a fountain in an interior courtyard, is cast from a large plank of burned wood that retains the grain. If you walk behind the sculpture, to a place by a fountain where you can sit, a subtle, translucent light filters through the work. There is something powerful and elemental in the simplicity of her sculptural forms.

Core’s photographs are the inverse of photorealistor hyperrealist paintings. Instead of capturing, inintricate detail, a photographic image in paint, Core replicates paintings using photography. In particular, she appropriates the still-life imagery of American artist Raphaelle Peale (1774-1825). For Something Fierce, Davis selected four still lifes from Core’s series Early American. The chromogenic prints displaying trays of fruits and melon reproduce all aspects of Peale’s originals, including the lighting and period-appropriate tableware. Core is painstakingly committed to getting the details right, even going so far as to grow her own heirloom fruits and vegetables. In 2012, the artist told Pasatiempo what drew her to Peale’s work: “Peale was able to infuse relatively simple arrangements with a psychology of the uncanny. His still subject matter is strangely animated and present.” Perhaps it is the sense of presence in Peale’s works that makes them a good subject for contemporary photographic reinterpretation. While Core’s photos recall long-established American and European traditions in still-life painting, they are hardly anachronistic — they enable dialogue between the past and the present.

Photographs from Sambunaris’ Shifting Baselines series are included. Sambunaris is a landscape photographer with an interest in the infrastructure that has been established to support global enterprises. The Shifting Baselines images are of container ships coming and going in the Houston Ship Channel. The photographs’ power comes partly from the magnitude of the operations involved — related, in this case, to the oil and gas industry. These ships head out to all corners of the world: Malta, London, Germany, Liberia, Norway, Indonesia, the Marshall Islands.  Some formal qualities, such as the presence of a horizon line, are consistent features. Also, despite the absence of people in Sambunaris’ work, a human presence is indicated in other ways, through manmade structures and machines that interrupt the landscapes and seascapes.

In an odd way, some pieces chosen for Something Fierce correspond with one another, although each selection is distinctive. Two unconnected series of images capture military training exercises, one by Pickering and the other by Lê. Three photos from Pickering’s Explosion series are included. The images capture the moments when explosive devices such as land mines and artillery shells are detonated. The dynamic, even ghostly specters of flame and smoke are shot amid pristine, bucolic locales in the English countryside, offering a sharp contrast between the quiet beauty of the pastoral scenes and the violence of the sudden eruptions. Lê’s photos were taken at Twentynine Palms, California, home of the Marine Corps Air Ground Combat Center. Her subjects, soldiers who have not yet been deployed to hot zones around the world, are relaxed and, in the case of a portrait of a man identified as Corporal Hoepper, almost shockingly young. Night Operation IV, showing a combat simulation, is one of a handful of panoramic views of the desert in which military exercises are in progress, but it could easily be mistaken for an image of an actual air and ground battle.

Cornwall’s Smoke Break, Camp America, is also an image of soldiers, from a series called Gitmo at Home, Gitmo at Play, about the U.S. Navy base in Guantánamo Bay, Cuba. The soldiers stand at ease, with the sea in the background. The image itself is mundane but highlights the difference between captors and captives. Another image from the series, Prayer Rug With Arrow to Mecca, Camp Echo, depicts the interior of a prison cell so isolating that its inhabitant has trouble orienting himself to the four directions. Cornwall is a former criminal-justice lawyer. She often shoots her subjects from behind, as is the case with Mourad, French Algerian, a photo of a Muslim youth counselor who was held at Gitmo without charge for more than two years before returning to France, where he served another year and a half in prison. Mourad stands with his back to the camera on a colorful painted bike ramp, cyclists circling his upright frame. There is some comfort in the idea that he’s shot from behind because he is looking forward, moving on. ◀

▼ Something Fierce; exhibit through Sept. 17