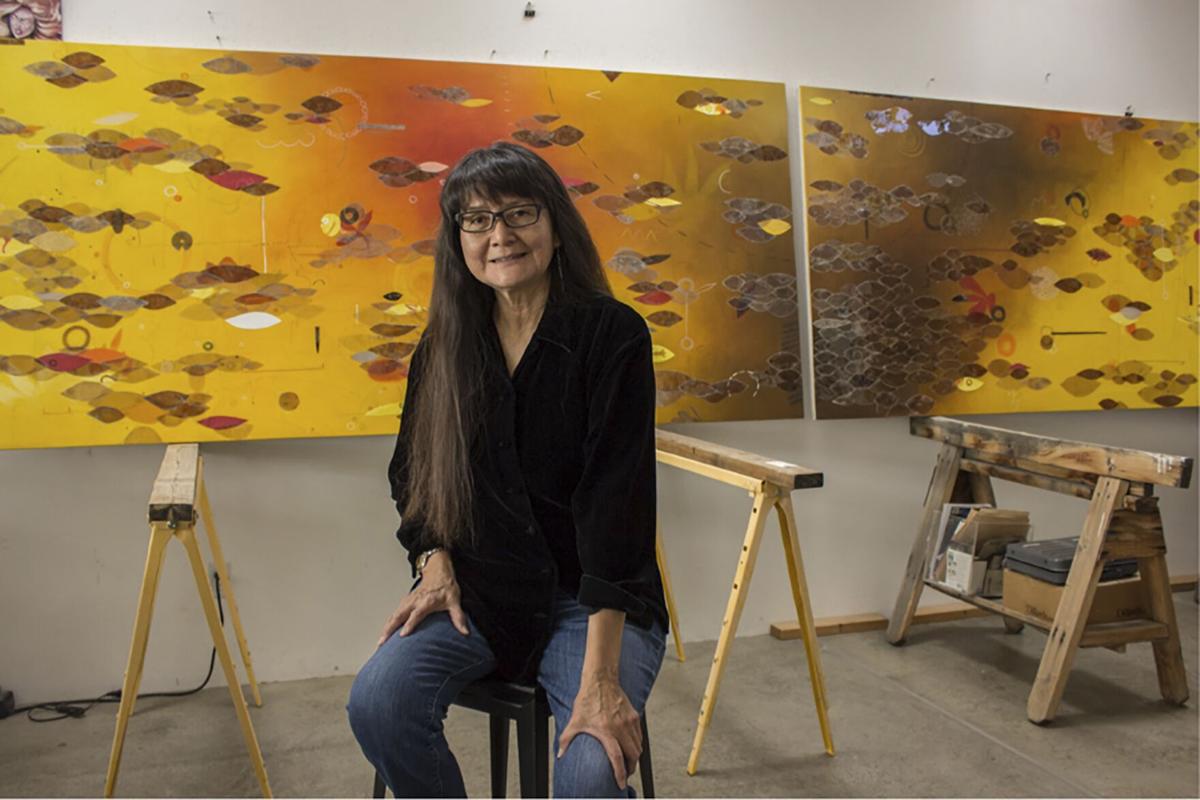 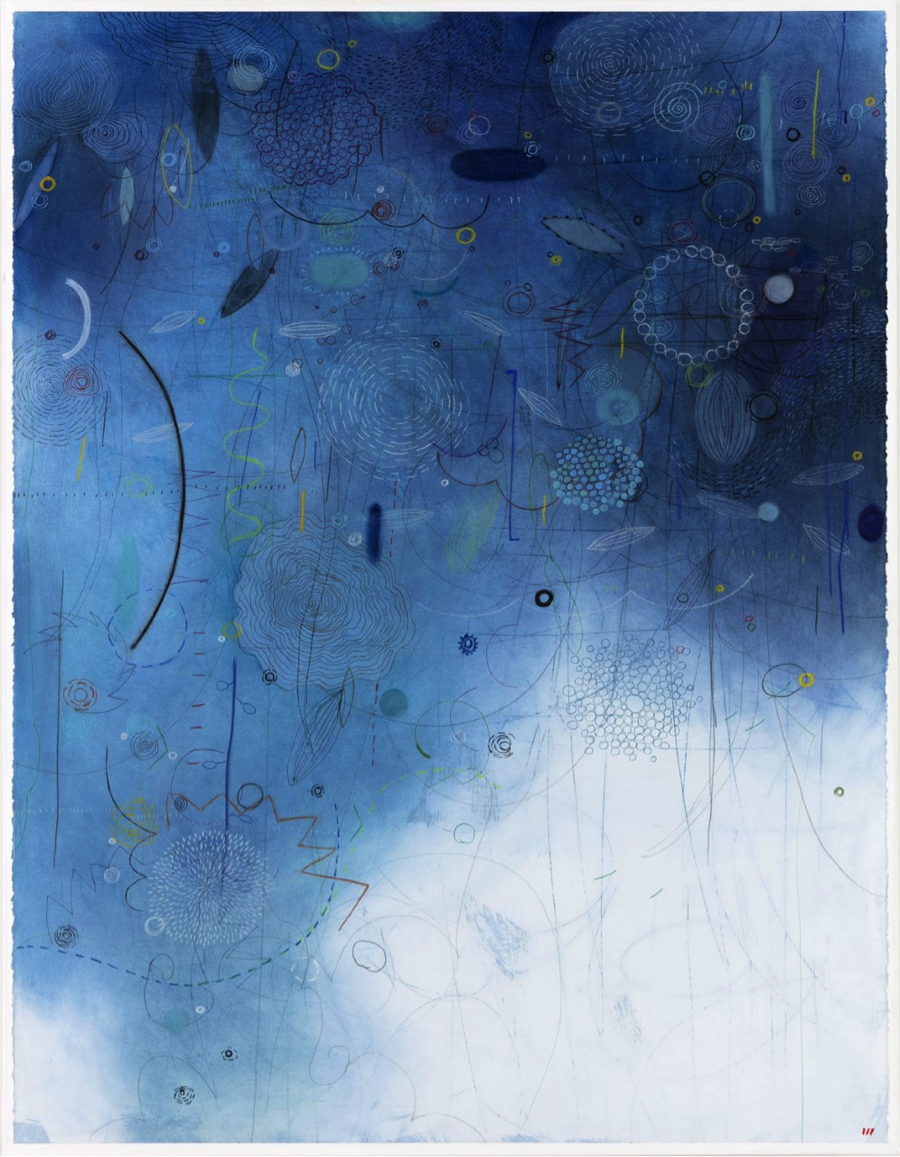 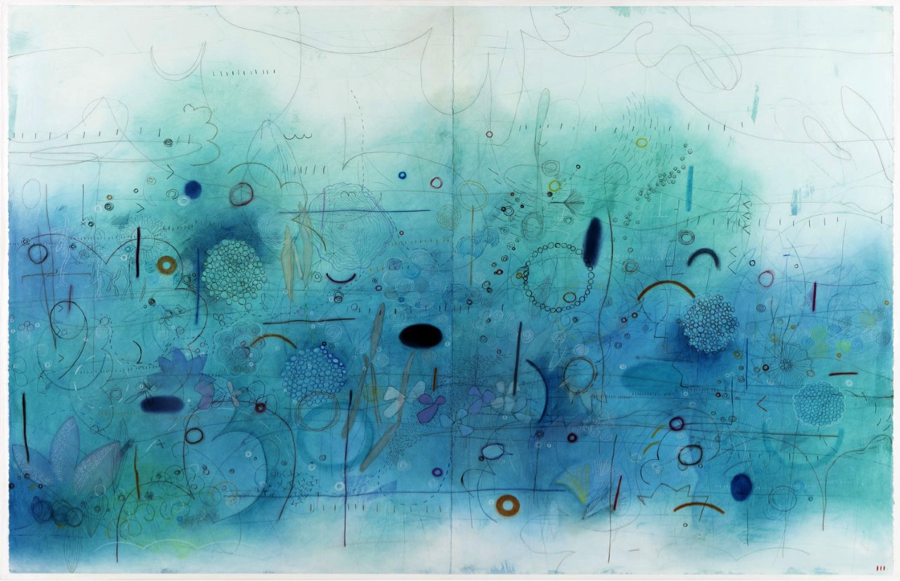 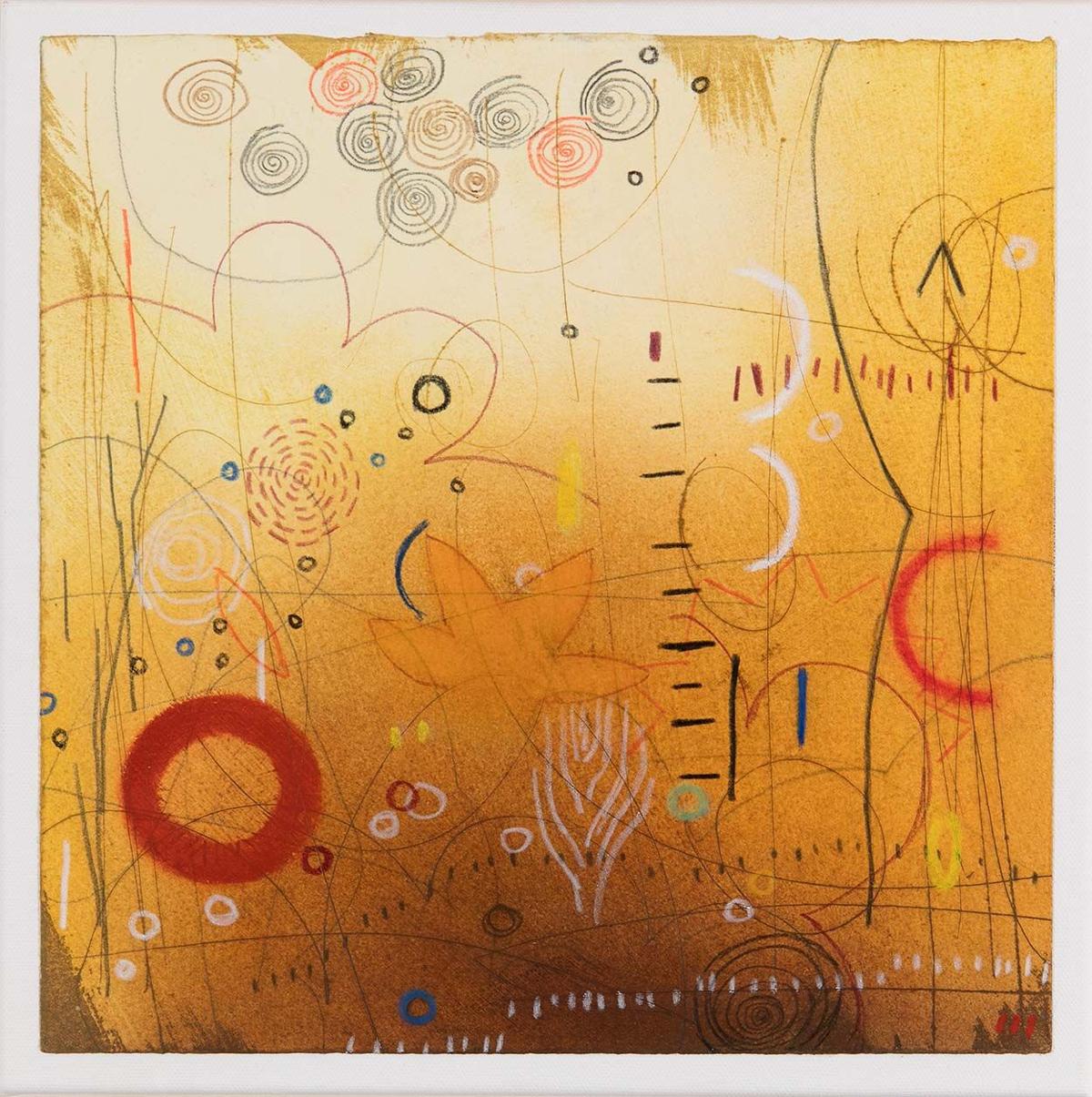 Emmi Whitehorse creates paintings you can inhabit. Consider one recent work in which marks and scrawls that resemble organic forms of nature float in atmospheric but nonspecific space, where linear elements such as circles, half-circles, ovals, arcs, and squiggles intermingle with shapes that look like masses of blossoming baby’s breath. Some shapes, painted in shades of blood red, look like petals that have been separated from their flowers. All of these shapes float free in a color field of cream and yellow ochre. Your eye moves in and out. You want to peer behind one form to see what more is there to discover. And you sense that it’s entirely possible to do so. Is the feeling of three-dimensional space merely an illusion?

The name of that painting is Petrichor II. The title is a reference to the earthy, comforting, pervasive fragrance — a rainfall after a dry spell. If petrichor had color, line, and form, this is how it might look.

Petrichor II is an abstraction. And, like most of Whitehorse’s paintings, it draws its inspiration from nature. For decades, Whitehorse, who’s among the more prominent and recognizable Native artists working in the contemporary scene, finds her muse in the sky, the land, and the sea. More specifically, she finds it in landscape vegetation, undersea plant life, and in the host of other organic forms evoked in her artwork, which always strike a balance between abstract ambiguity and real-world elements. They can suggest landscapes, seascapes, the terrain of the dreaming mind, or the hallucinatory dance of phosphenes behind closed eyes.

The landscapes of the mind are perhaps the most fitting associations for the six large-scale paintings — some slightly larger than 4 feet high or 6 feet wide — in the exhibition Sanctum, which runs through Jan. 16. at Chiaroscuro Contemporary Art (558 Canyon Road, 505-992-0711, chiaroscurosantafe.com). The name suggests a place of safety or refuge, on one hand, and a holy temple or shrine on the other. “ ‘Sanctum’ is also a healing place where one goes,” says the 63-year-old Navajo artist. “I was thinking more along those lines. Some of the titles kind of suggest that process of healing or re-centering the soul, the mind.”

The works in Sanctum remain on view indefinitely on the artist’s page on the gallery’s website.

The paintings were all created during the pandemic, a time when Whitehorse committed herself to inward reflection, to rebalancing herself after the upending effects wrought by a tumultuous year. Working through the summer on Sanctum was a response to the opportunity she saw in a period of increased isolation. “All of a sudden, we had what seemed like a pristine air space around us,” she says. “That makes you focus on what you have, on the unique and wonderful place where you live.”

When she started on the project, soon after the pandemic forced so many changes in the social milieu, the Santa Fe-based artist was staying in Tucson. On daily walks, she began examining the vegetation around her, which mostly consisted of various types of cacti. She photographed them, examined them up close, then took what she saw and invested their likenesses into her compositions.

“Yes, the paintings are derived from nature, but not as an illustrative study,” she says of the suspended forms that appear throughout her canvas-mounted works on paper, which are rendered in oils and mixed media. “They appear more alien-like or unrecognizable as plant forms. It took a long time to finish them. I started them in March, but then I threw out my back in May, and I couldn’t do anything for two months. It’s been a tortured, slow process.”

Through her work, Whitehorse seeks to make manifest the Navajo concept of hózhó, which involves a recognition and respect for the beauty, harmony, and interconnectedness of being. It’s a guiding principle for living a life of wellness. “It’s a balance where everything supports a healthy mind and a healthy physical being,” she says. In her paintings, the concept is reflected in the balance between areas of dark and light tones, between drawn and painted elements, and between the representational and the abstract.

“While indigenous belief systems guide and inform her abstract paintings, they stand alone as works of power and beauty, accessing our shared psyche,” says Davison Packard Koenig, executive director and curator of the Couse-Sharp Historic Site in Taos. “Her latest exhibition is perhaps her most powerful body of work to date. Emmi reaches deep inside herself, exploring the harmony and balance found in our connection to the land and the healing and renewal that it provides.”

The work was the result of a solitary exercise, something to which Whitehorse was conditioned long before she became a prominent contemporary artist. As a young girl growing up on the Navajo Nation, she tended sheep — her family’s occupation. Unaccompanied on daylong excursions, she became attuned to the effects of light on the landscape, and the flora and fauna of her surroundings. She whiled away the hours by looking, thinking, and entertaining herself with coloring books and a portable radio. “It certainly makes a solitary person out of you or makes you comfortable with your solitude because you’re out in the open, alone, with the big responsibility of keeping your animals safe,” she says. “And there’s a whole lot of nothing to do. It just puts you in a different mindset.”

She also did a lot of drawing. And when she was in grade school, she preferred to do little else. “The only thing that interested me was doing my drawings. I was a terrible student because of it. I didn’t pay attention most of the time.”

When Whitehorse entered the University of New Mexico in the late 1970s to pursue a degree in painting, it was against her parents’ wishes. They had hoped she would go into a field like medicine or law. “Those kinds of things guarantee a future, or a more stable life,” she says. “But when I got to the university, I went straight to the art department and didn’t tell them.”

It was there, at UNM (where she also earned a master’s degree in printmaking in 1982), that Whitehorse first became interested in her career-long habit of painting on paper instead of canvas.

“We were taught to paint in a formalistic way, where you use an easel and have a palette in front of you and apply paint with a brush, and you’re kind of removed from the work. It’s very clinical, you know? That, to me, was just so impersonal. I just couldn’t work like that. Paper is more durable than most people think, and it’s got a very beautiful surface, almost like a fabric. I think that’s what attracted me. Canvas always has a weave. It’s a texture that you can get rid of if you slather on enough gesso. But, to me, canvas is not as forgiving as paper.”

There’s a smooth, luminous quality to Whitehorse’s compositions, and a depth she achieves through her mastery of the paint. Shapes come to the fore and recede as though they inhabit a real space. That depth derives from her early fascination with the weavings made by her grandmother — not unlike what you see in the graphic work of Dutch artist M.C. Escher. Whitehorse creates a similar effect in her paintings through a process that involves the building up of layers. She starts with a field of color, smeared by hand, and adds more color to some areas to vary the contrast, then fills in the space with the drawn lines and painted forms. “It does create the effect of a small world that you can float in, drop in, and drop out of. That’s always interested me, trying to make something flat have this feeling of depth.”

While still in college, Whitehorse became the youngest member of The Grey Canyon Group, an influential association of seven contemporary Native American artists that included Jaune Quick-to-See Smith, Ed Singer, and Felice Lucero-Giaccardo. Their work stood in stark contrast to more traditional Native arts. They were as likely to find inspiration in the work of Pop artists, abstract expressionists, and conceptual artists as in anything that could be deemed traditionally Native. Whitehorse’s art is rendered in an intuitive process, and the recurring motifs of plant forms have developed into a recognizable and unique visual language that she’s stuck with since her days exhibiting with the Grey Canyon Group.

“Most artwork done by Native artists at that time was pottery and weavings,” she says. “There was a traveling show that we put together and the people that came to see the show were really mad at us. ‘Why are you guys doing this? Go home and make pottery because that’s what your mothers and grandmothers did.’ We were just shocked that this was this attitude toward Native artists. It didn’t apply to other artists. It was just patronizing. At that point, we were even more determined to show the world that there were people like us making contemporary work.”

“Emmi Whitehorse is one of only a handful of Indigenous artists whose work transcends the Native art world,” says Koenig.

She did so by rejecting a reliance on traditional Navajo imagery and materials. Her interpretation of nature is personal, derived from years of immersion in the landscape. You don’t mistake a painting by Whitehorse for the work of someone else.

“It’s something that is uniquely mine,” she says. “There’s a lot of artists that I love, but it’s their unique stamp, their unique view of the world that I admire. I respect their work, but I don’t try to make my own work conform to their sensibilities or to the way they paint.” ◀