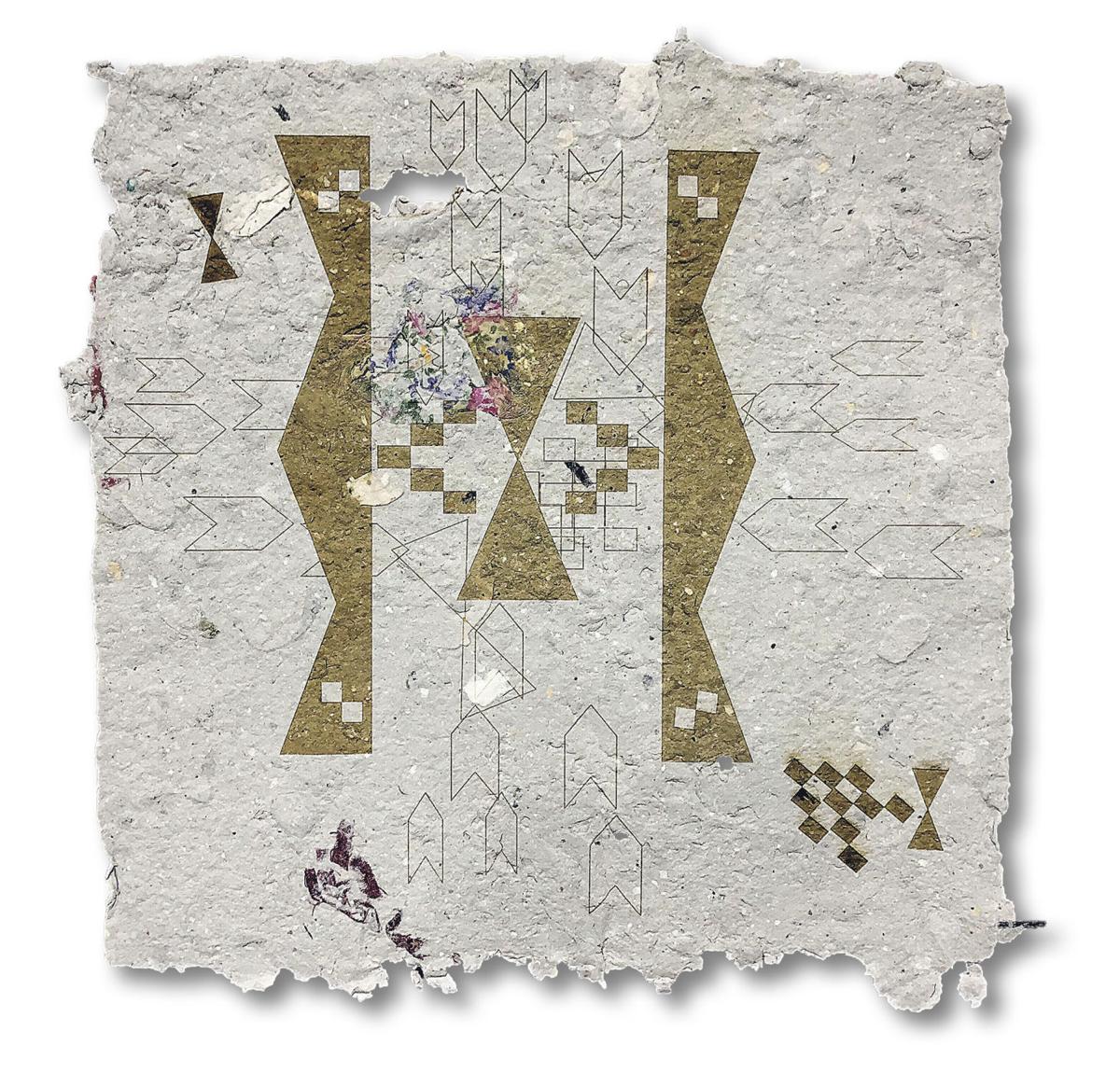 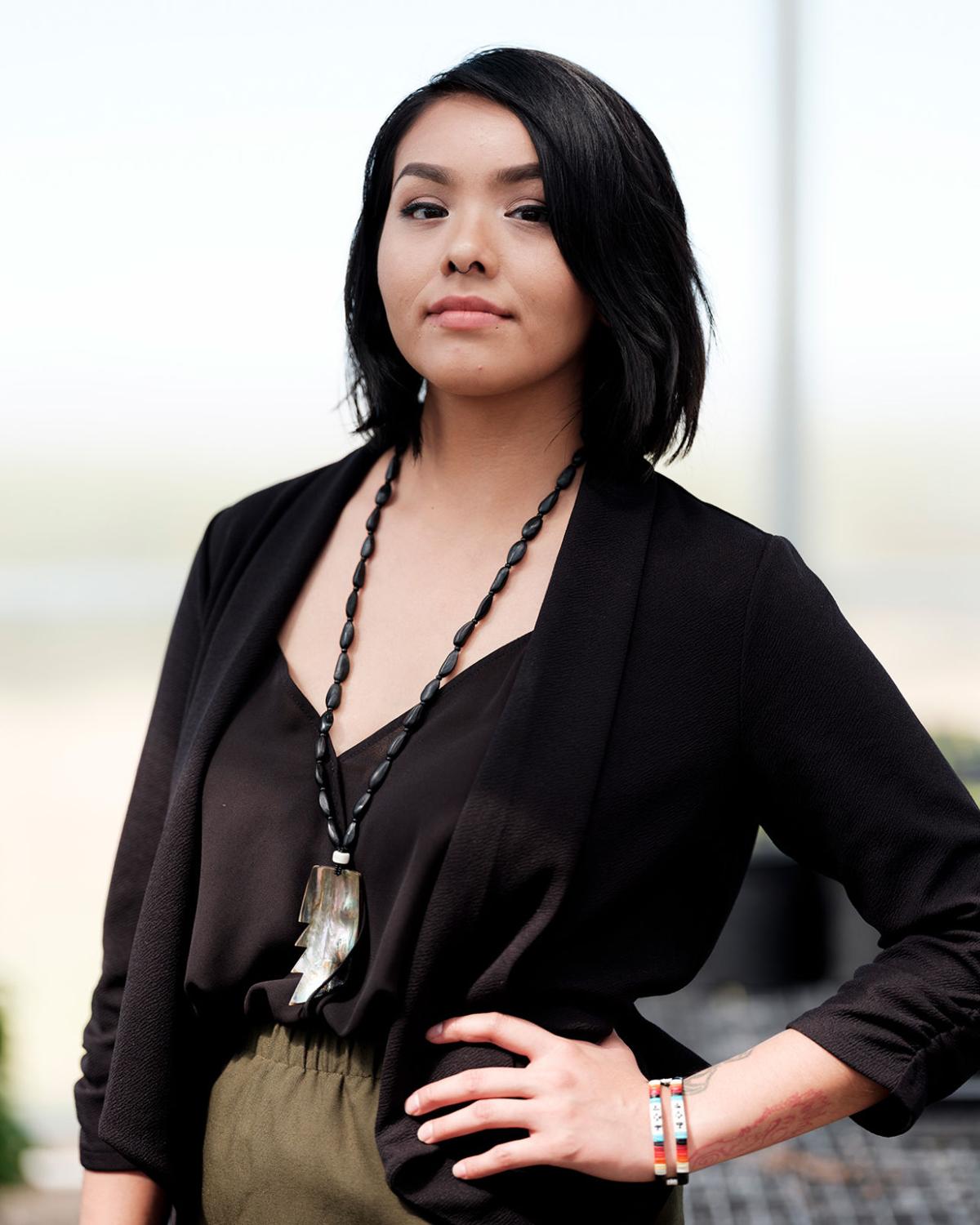 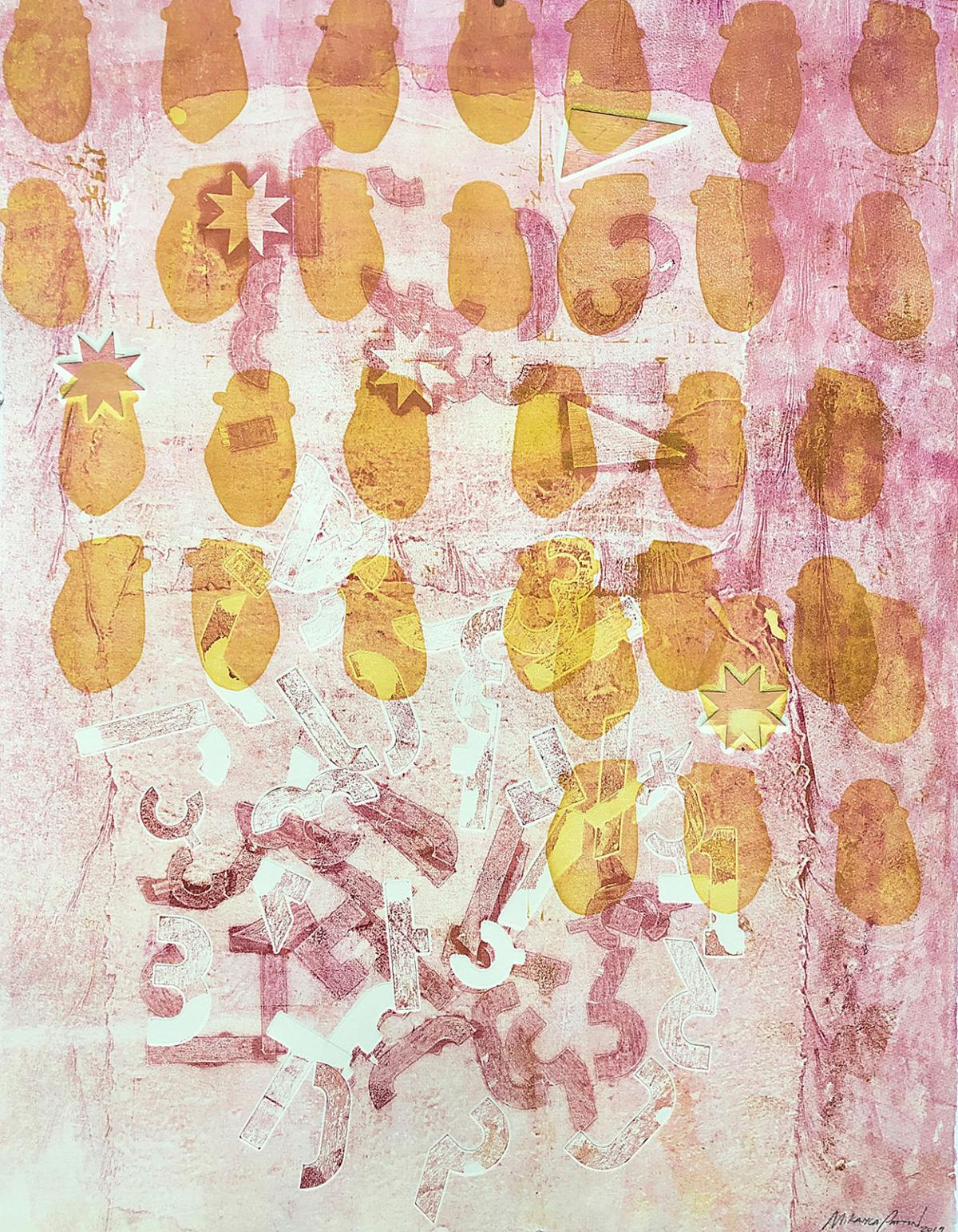 Mikayla Patton, For the Sake of Us (2019), linocut, monotype 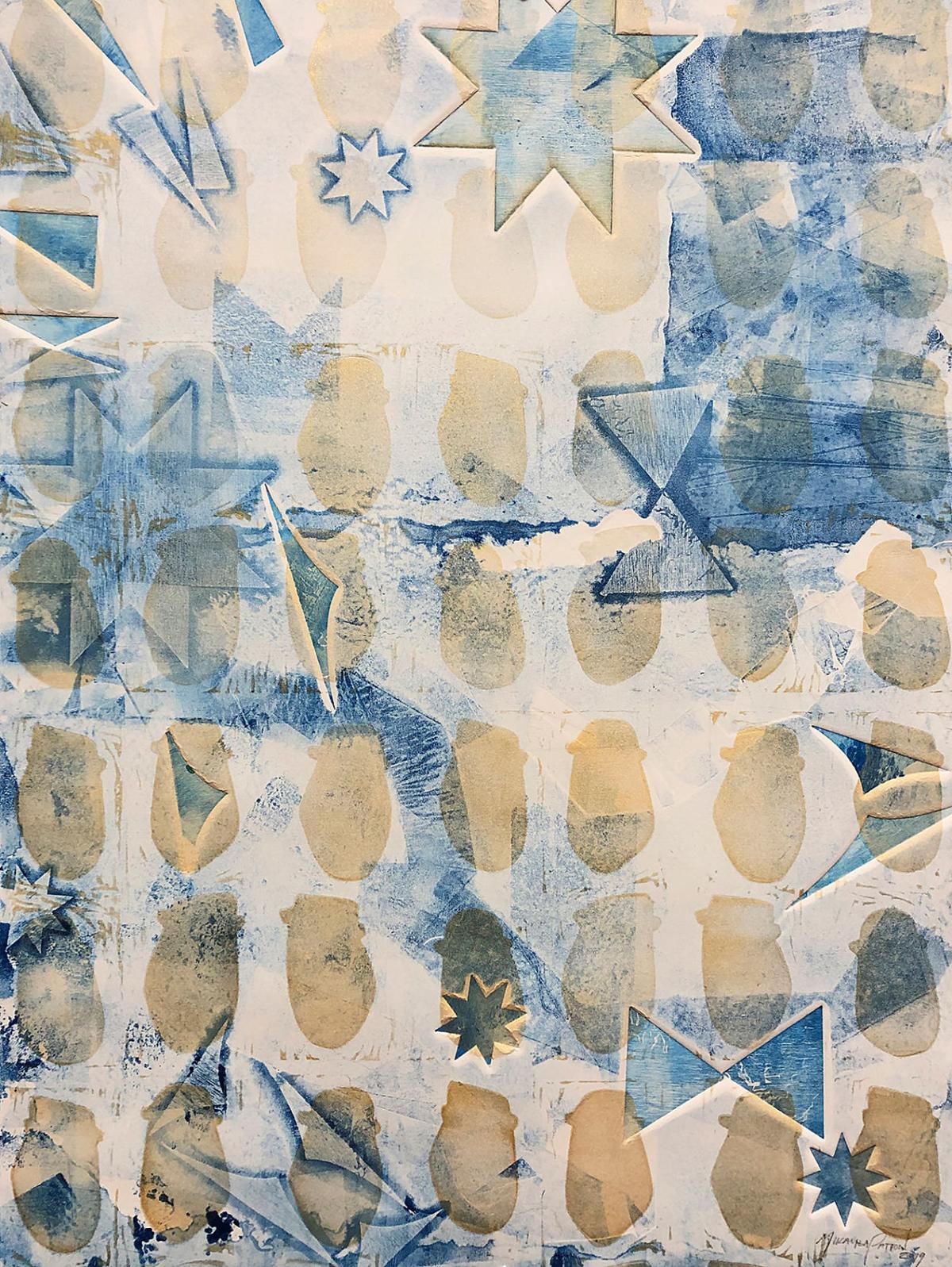 Mikayla Patton, For the Sake of Her (2019), linocut, monotype, photo Jason Ordaz 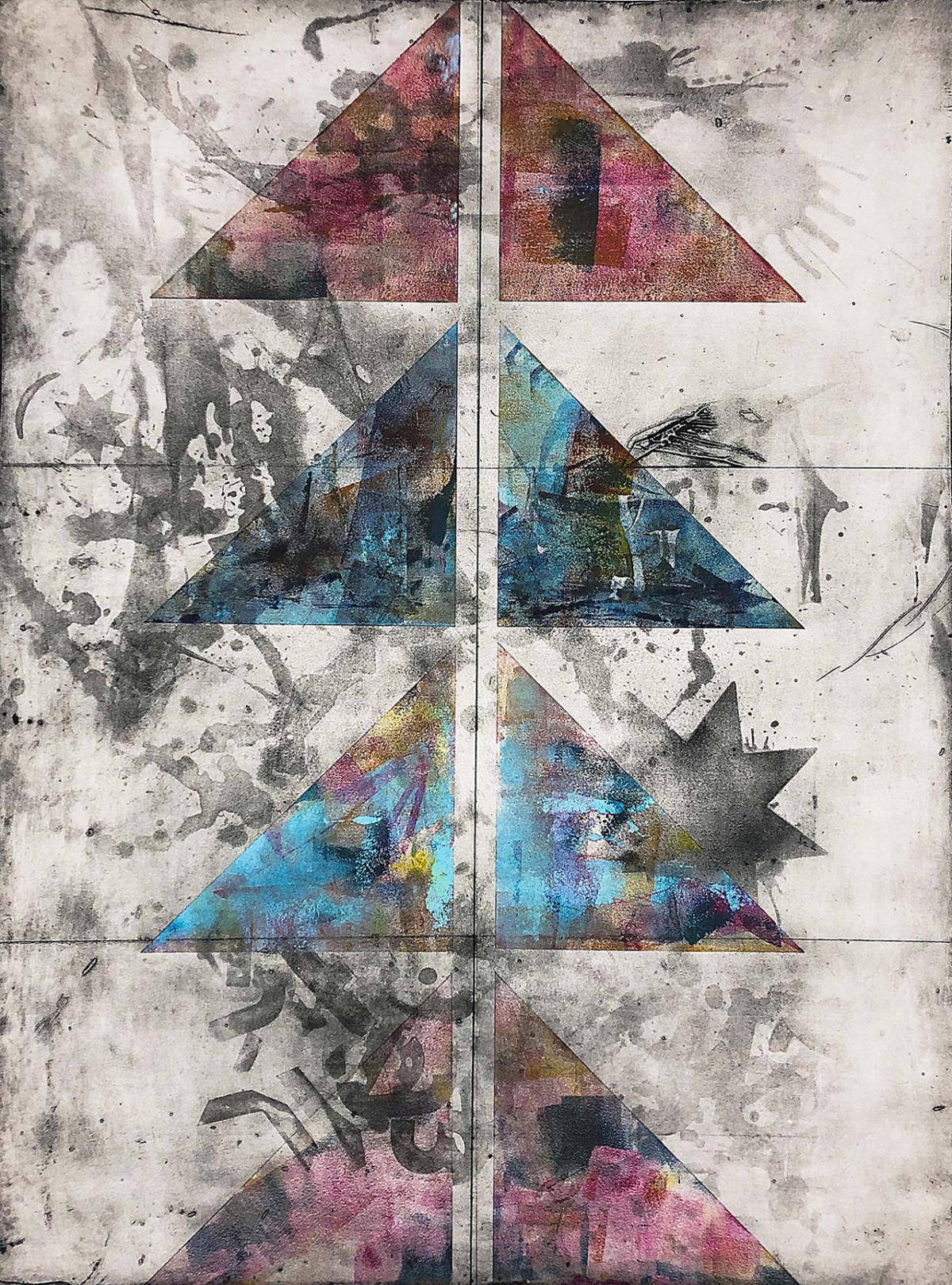 Mikayla Patton, For the Sake of Us (2019), linocut, monotype

Mikayla Patton, For the Sake of Her (2019), linocut, monotype, photo Jason Ordaz

They could number in the hundreds, the adornments on a Lakota woman’s elk tooth dress. Beginning at the neck, and added piecemeal after every kill, the elk teeth (known as ivories) could potentially cover the entire dress, in time. The more teeth, the greater the status of the wearer. “Whenever your dress is completely filled, that really symbolized wealth, not just in the culture, but within your family,” said artist Mikayla Patton, who uses images of elk teeth as a motif in her works on paper. “It was about having support, being able to be fed, clothed, and about being really resilient. I used that as a personal thing, of me being resilient and finding my own wealth within myself and my culture.”

Patton, who’s in her 20s, is a recent graduate of the Institute of American Indian Arts (IAIA). She earned her bachelor’s degree in studio arts in May. Now the Lakota artist, who grew up on the Pine Ridge Reservation in South Dakota, is taking part in Native Visions, the annual Native group show at Chiaroscuro Contemporary Art. The event opens on Friday, Aug. 16, and is timed to coincide with Indian Market weekend (Saturday and Sunday, Aug. 17 and 18, on the Santa Fe Plaza).

Patton, who has about three new works on paper in the exhibit (which runs through Sept. 7), doesn’t exactly use the elk teeth motif in any explicit way. Those unfamiliar with the traditional dresses referenced in her work may well wonder what they represent. They are repeated, seed-like forms arranged in horizontal rows in abstract compositions, often rendered in colors other than white, and set against abstract backgrounds. “People see a lot of different things in them, and I really like that,” she said. “In everything I’ve been doing in the last year, I’ve been using them a lot.”

At IAIA, Patton started out in printmaking and then transitioned to painting. She strived to create figurative compositions but was drawn more to abstraction. She returned to printmaking because the medium was more suited to the types of abstract compositions she wanted to make. In her final years at IAIA, she developed a strong body of work in linocuts, monotypes, and lithography. The latter, in particular, is a difficult medium to master, involving many steps and, traditionally, acid solutions and limestone plates. “Traditional lithography is hardcore,” she said. “I’m more interested in alternative processes of printmaking, using less expensive materials and less harmful materials and less heavy materials.”

At Chiaroscuro, Patton is in good company. Her work hangs alongside that of major artists such as Rick Bartow and Emmi Whitehorse. It’s an achievement for an emerging artist still in the early stages of her career. Simultaneous with Native Visions is a show of new sculptural work by Rose B. Simpson.

“Mikayla’s work has a cultural consciousness and sensitivity, but it’s also daring in a very subtle way,” said Simpson, who was following Patton on Instagram and recommended her to the gallery. “Whatever she has going on, I respect it, and I think it respects itself.”

Simpson, who got her own start when she was just 21 years old, is now among the most recognized Native artists on the American scene. “I want somebody like Mikayla to do really well with her work and be supported, and support herself with her work,” she said. “I’ve been blessed every day, and I want her to have that same gift.”

Patton, who currently resides in Santa Fe, spent most of the summer back home in South Dakota. She may be returning for good but hasn’t decided. She is considering attending graduate school at the University of New Mexico. But, right now, she only has a small, portable press to produce her work. In her last year at IAIA, she adapted it to a second purpose: papermaking.

“I was doing an independent study,” she said. “I did a lot of research on traditional papermaking. I went to the thrift store and made my own screens using old stretcher frames. I used the weight of the press to compress the paper. Literally everything I used to make it was found.”

Even the paper came from found materials, such as textiles and used or discarded copy paper. Sometimes, she used paper already printed with text. Despite the fact that she first turned it back into a pulp, bits of texts would sometimes appear in the finished paper. “If it has too much ink, it will color the entire batch. I did a batch that ended up looking like concrete when I was done with it.”

In all her work, regardless of how abstract, there’s a deep connection to her Lakota culture and family heritage. The handmade papers she makes are sometimes printed with geometric patterns afterward, using laser etching techniques. It’s easy to assume these are traditional Lakota design motifs, but Patton said they’re more personal. In her triptych Uncis Love (2019), for example, the designs reflect the love shared between her and her grandmother, who died when Patton was a still a young girl. “Uncis means ‘grandma’ in Lakota,” she said.

“Growing up, my grandma used pretty much anything she could get her hands on in terms of fabric, because she sewed a lot. She learned to sew in boarding school. She sewed her own clothes all the time, and she made quilts all the time. And, you know, in quilts they use scrap pieces. It’s interesting in how that translates to my work in just shredding up the fabric for making paper and thinking about the things my grandma did in terms of her own artistry.” ◀

Indian Market brings an estimated 120,000 visitors to Santa Fe and more than $100 million in revenue to the state annually. This year, expect no different.