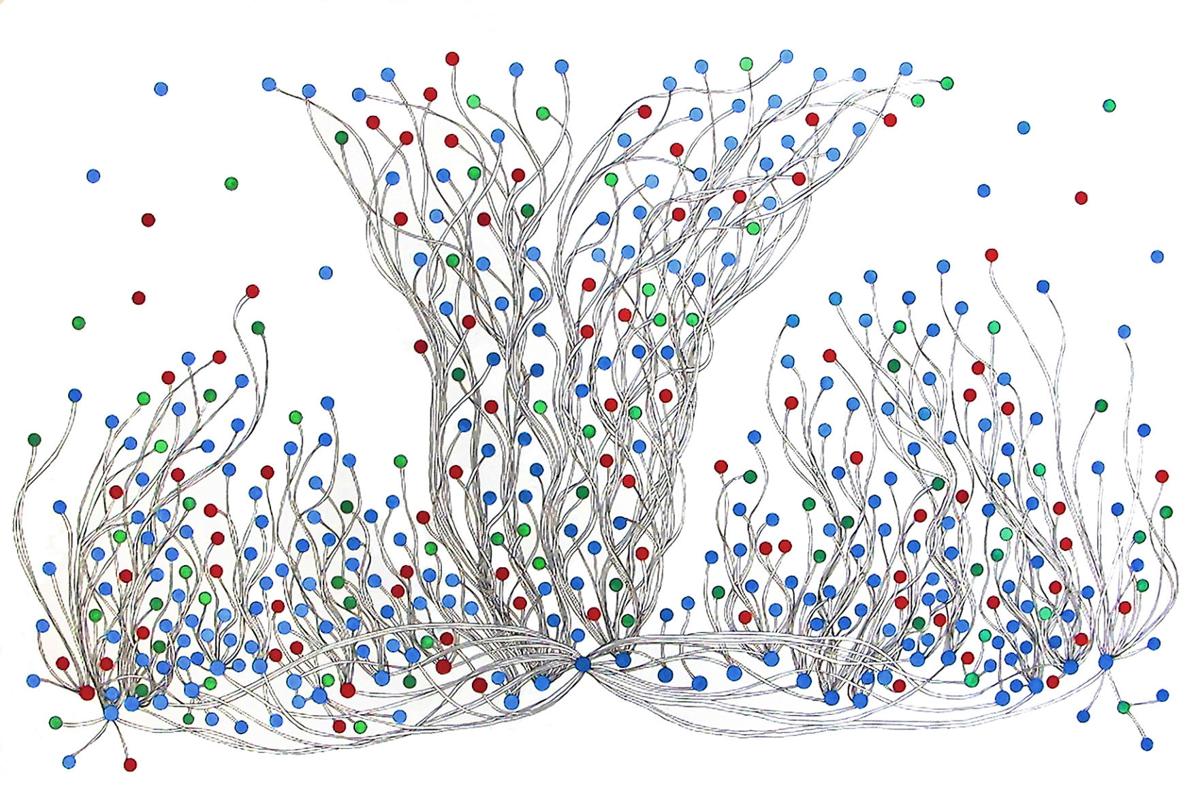 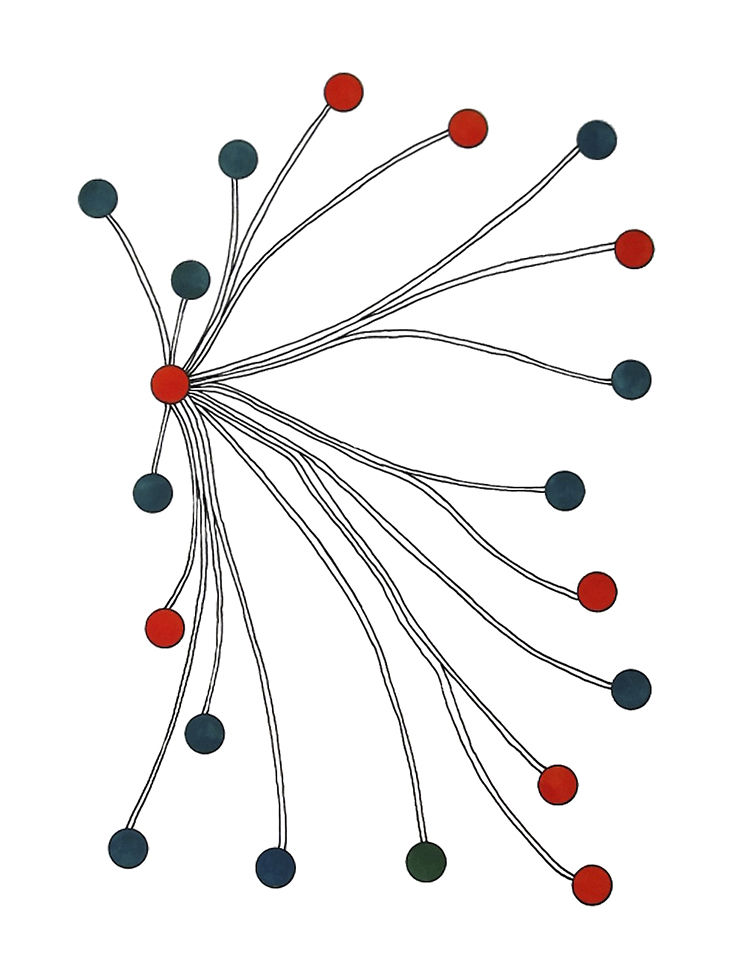 In just five steps, you can link Mary Astor to Kevin Bacon. Astute film buffs can do it in even fewer steps, perhaps, but here goes nothing. Astor was in Meet Me in St. Louis with Judy Garland, whose daughter Liza Minnelli was in Rent-a-Cop with Burt Reynolds, who was in Boogie Nights with William H. Macy, who was in Murder in the First with Kevin Bacon. That was easy — and it took only 10 minutes or so to puzzle out, after having selected Astor at random. Are we all that well-connected? Genetics says yes, and a growing art movement called “networkism” is helping us to see the connections.

By its very nature, art that can be labeled networkism — a type of art that takes data as its subject — is abstract. Network artists aren’t necessarily dealing with observable subjects like a portrait or still-life painter does. Rather, they take information, which is sometimes incomplete, and develop compositions based on those facts, looking for patterns and establishing correspondences between one data set and the next. “Networkism, as defined by Manuel Lima, is mapping patterns of information — any kind of scientific, technological, or genetic data that’s available — and there’s so much now,” Hillsboro-based visual artist Susan Reynolds said. Reynolds most recently exhibited her work at Art Santa Fe this summer. “Networkism is a new art form. It was coined about 15 years ago by Manuel, who got his MFA at Parsons School of Design,” she said. “He did his graduate work on connectedness through the internet because the internet was fairly new still.”

Reynolds’ own work in genealogical research developed because of a family mystery. “My mother passed in 1978, and that’s when we learned that she’d been adopted, so we didn’t know her heritage,” she said. “I’m the one in the family that kind of jumped into the genealogy.” There are numerous ways, perhaps even innumerable ways, to depict genealogical data in visual form, but Reynolds doesn’t make plain the fact that her compositions — which are made up of hand-drawn lines that represent genetic relationships and colored dots that represent people — are the result of her research. They look much simpler and more freeform than they really are, resembling fluid, organic forms like sea anemones or jellyfish that gently rise and fall with the undercurrents. “Having grown up with no first cousins, to find out from my DNA that I’ve crossed the 600 threshold for fourth cousins or closer, it became an overwhelming interest to me,” she said.

Each dot in her works on paper represents an individual who is known to Reynolds through her inquiry but unidentified in the artwork. Every individual dot is a center from which the drawn lines emanate outward. In DNA #25, for instance, one dot is linked to 19 others and while she didn’t illustrate it in this piece, each of those 19 are linked, as well, to many more people. These relationship help the viewer to understand, for example, why a game like Six Degrees of Kevin Bacon is almost always successful. In the abstracted lineages Reynolds depicts, the greater the number of people represented by her data, the greater the chances of discovering unexpected relationships grows. “I was drawing little DNA circles trying to find surnames to follow and see if they led to my mom,” she said. “They just evolved into bigger forms.”

The steps that tie together two individuals who are related by blood — even if only distantly — could be numerous. To suggest there are only six, as in the Kevin Bacon game, might be oversimplifying things in terms of the bigger picture (the game pretty much sticks to actors and movies), but the idea of connectivity is sound, and genetics bears it out. “For me, it celebrates one humanity,” she said. “You get your DNA done and you find out that you’re connected to all kinds of people and backgrounds.”

A challenge and provocation exists because of the fact that the data only exists for those who have been tested. The number is growing, thanks to the availability of kits that allow individuals to test themselves. But if so many connections can be drawn on what is now only a small sampling of human populations, further data seems likely to increase the probability of greater genetic relationships among individuals and groups. “There’s a science word — mycelium — for a root system of a particular kind of fungus or plant that grows underground and explodes out,” Reynolds said. “We’re living in a time of massive global migration. People are on the move to all kinds of new places, so the genetic pool, within one hundred, two hundred years, is going to change dramatically. Mysteries are being solved all over the world right now. Secrets are being unveiled. I personally think it’s going to make us a stronger human race.”

We're living in a time of massive global migration. People are on the move to all kinds of new places, so the genetic pool, within one hundred, two hundred years, is going to change dramatically. — Susan Reynolds