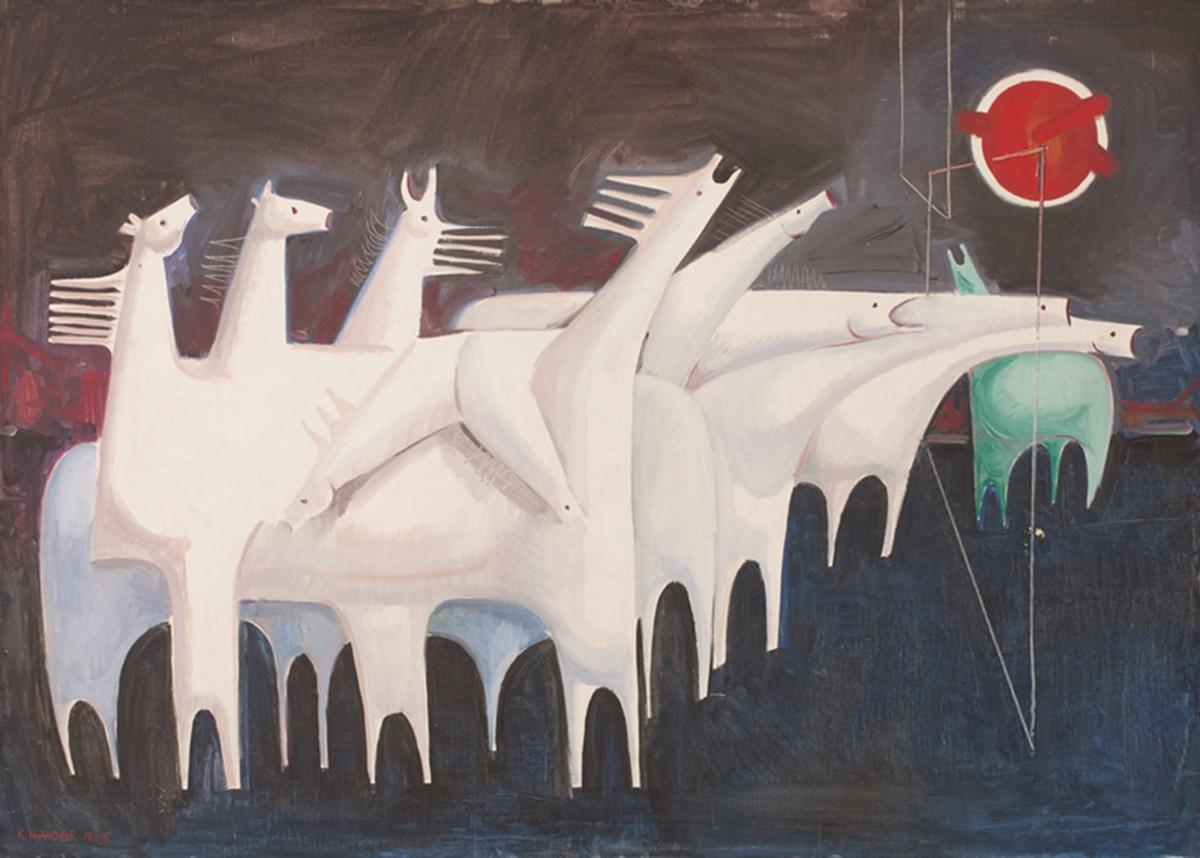 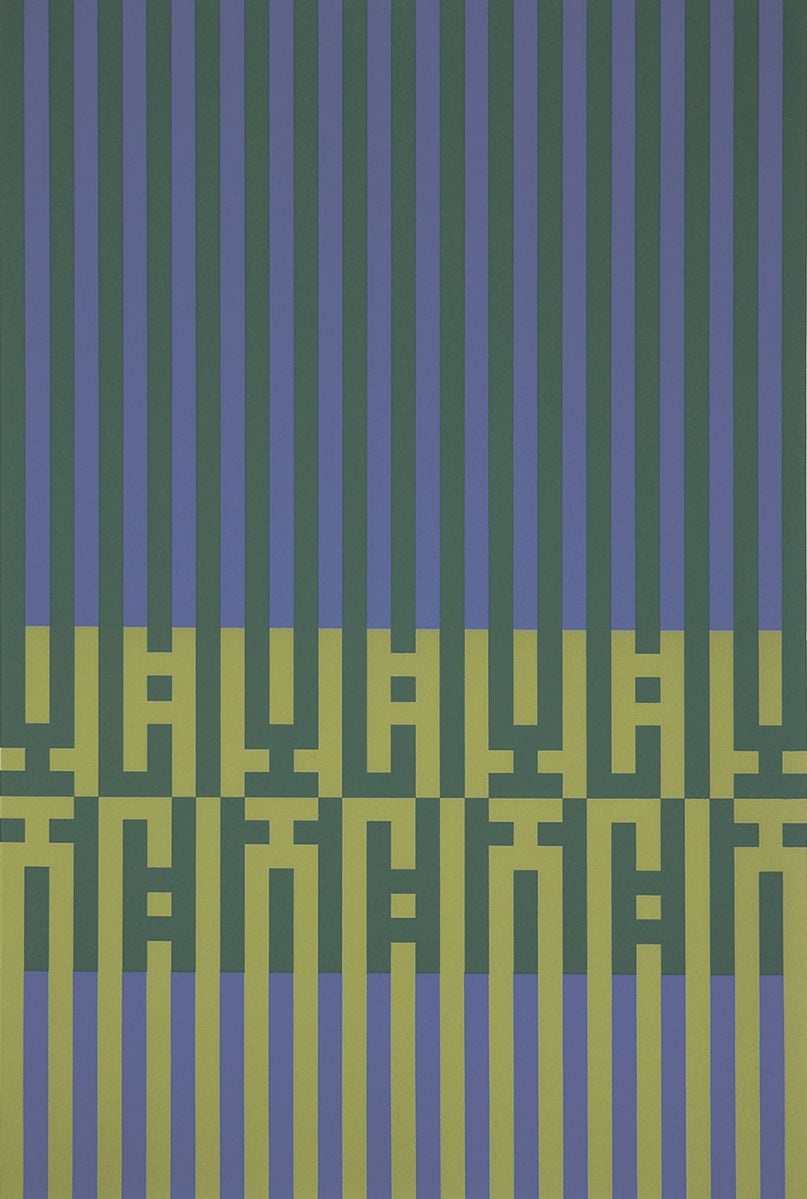 Kamal Boullata: La Ana Illa Ana (There Is No 'I' but 'I'), 1983, silkscreen; courtesy the Barjeel Art Foundation, Sharjah; the Whitechapel Gallery, and Prestel 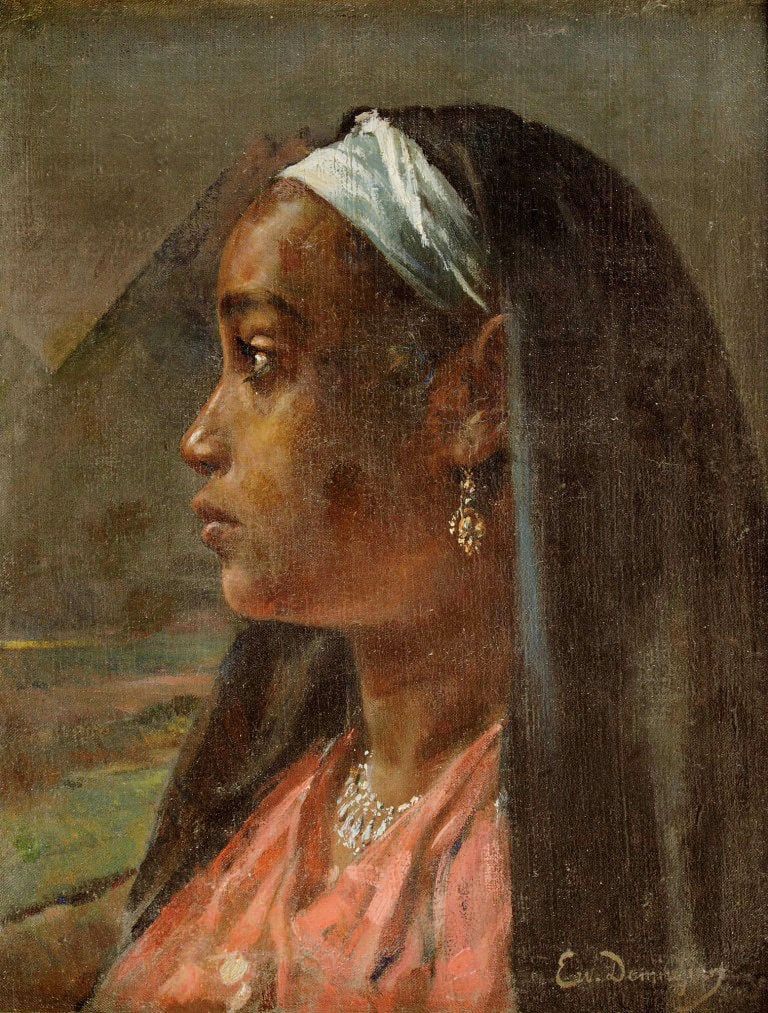 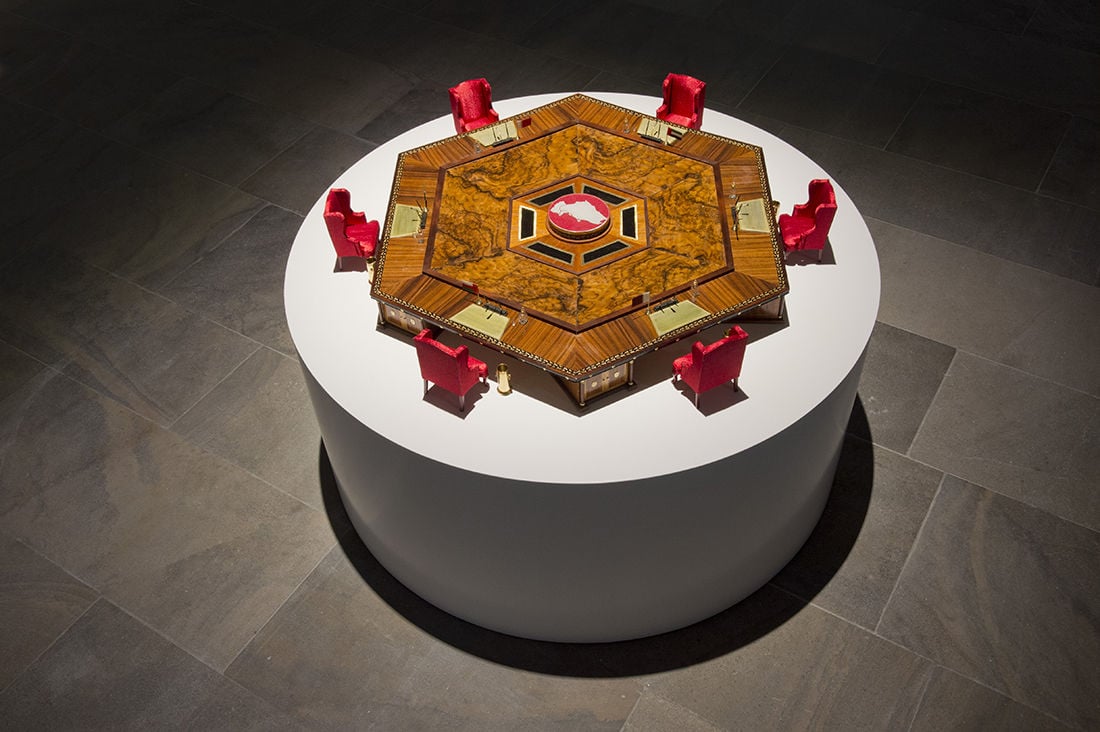 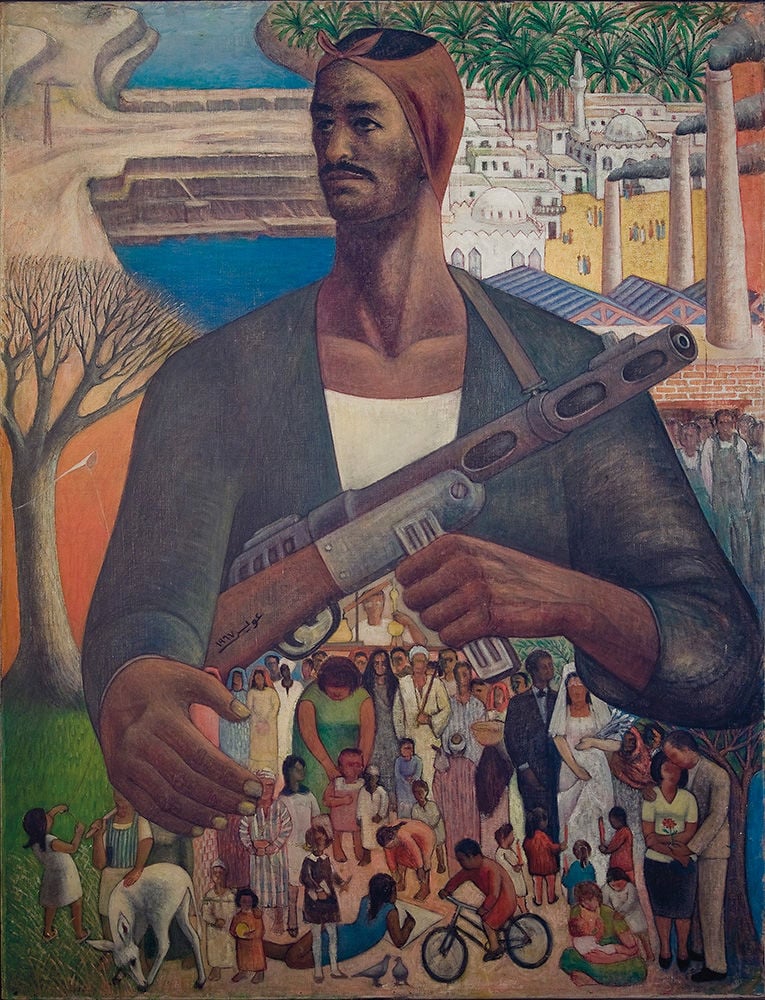 Kamal Boullata: La Ana Illa Ana (There Is No 'I' but 'I'), 1983, silkscreen; courtesy the Barjeel Art Foundation, Sharjah; the Whitechapel Gallery, and Prestel

The Battle of Karbala was fought in the year AD 680 in what is now present-day Iraq. The incident came about after Husayn ibn Ali, a grandson of the prophet Muhammad, refused to swear allegiance to the caliph Yazid I. Husayn, along with his family and supporters, were ambushed near the Euphrates by Yazid’s military. Those supporters who weren’t killed were imprisoned, but most — including Husayn, who was beheaded — were slaughtered, trampled under the hooves of the soldiers’ horses. The victims have since been considered martyrs among many Sunni and Shia Muslims, their sacrifice commemorated by religious observances as well as in histories, literature, and art.

More than a millennium on, artist Kadhim Hayder (1932-1985) referenced the Battle of Karbala in his 1965 painting Fatigued Ten Horses Converse With Nothing, also called The Martyr’s Epic, a work that questions martyrdom’s value and despairs at the lack of answers to those questions. The Martyr’s Epic is now among many other treasures in the collection of the Barjeel Art Foundation, a museum established in 2010 in the United Arab Emirates to house the art collection of Sultan Sooud Al-Qassemi. The collection’s focus is on modern and contemporary Arab art. In 2015, London’s Whitechapel Gallery hosted a four-part exhibition based around the Barjeel collection and published an accompanying catalog, Imperfect Chronology: Arab Art From the Modern to the Contemporary. The catalog is an overview that places the art movements of the Middle East within the context of changing traditions, war, diasporas, and political upheavals. The introduction by Whitechapel director Iwona Blazwick states that a barjeel is an ancient type of cooling tower common to the Middle East. The name means “wind-catcher,” and as she writes, “It seems a particularly apposite description for a collection of art that spans a seismic century of cultural expression.”

The horses in The Martyr’s Epic cry out as though in sorrow, under a dark sky and a blood-red sun. The painting has an antecedent in Pablo Picasso’s Guernica. Like Picasso’s painting, which was made in response to the bombing of the Spanish village by Nazis during World War II, the lack of reference in The Martyr’s Epic to specific events beyond the Battle of Karbala makes it a timeless symbol of oppression, suggesting that the lessons of the past have yet to be learned. According to Omar Kholeif, former curator at Whitechapel Gallery, white horses often represent martyrs in Islamic culture.

Hayder painted his work during the First Iraqi-Kurdish War, in which government forces fought against Kurds seeking autonomy, targeted Kurdish people in media campaigns, and bombed Kurdish villages, sometimes entirely incinerating them with napalm. At the time he painted it, Hayder was chair of the visual arts department in Baghdad’s Institute of Fine Arts. At midcentury, the Arab world was changing as it gained more and more independence from European powers. Kuwait held its first-ever pan-Arab art exhibition in 1959, two years before gaining independence from the British Protectorate in 1961, and Algeria, in turn, gained its independence from France the following year. That same year, 1962, a national museum of modern art opened in Baghdad.

Although the Barjeel Art Foundation collection is identified as Arab art, the term “Arab” is a broad one, comprising peoples of numerous nations, including Algeria, Iraq, Saudi Arabia, Egypt, Syria, Lebanon, and Sudan, among others. Blazwick cites editor S.M. Nashashibi’s Forces of Change: Artists of the Arab World, which makes the point that the region is a complex mix of cultures and beliefs: “The Arab world is a ‘world’ not a nation.” Rather than tell the story of Arab art through a lens of ethnic and regional identity, the catalog and exhibition series at Whitechapel establish correspondences between lost or forgotten histories, made by artists who lived through the changes to their nations’ social and political ideologies, and the present. “The Arab world is a region in flux,” writes Sultan Sooud Al Qassemi in his essay “The Arab World: A Sum of its Parts.” “It has seen its borders redrawn every few years, from the times of the Sykes-Picot agreement in 1916 to the 2014 ISIS takeover of parts of Iraq and Syria. As borders shift, so do national identities.”

The book’s plates are arranged into four sections, following the chronology of the exhibition: Debating Modernism I and II, and Mapping the Contemporary I and II. Kholeif, in his accompanying essay “Tracing Routes: Debating Modernism, Mapping the Contemporary,” states that the initial chapter of the exhibition attempts “to map a modern condition ... that exists outside the confines of Western Enlightenment thought, while also considering the belief that an Arab Nahda or renaissance exists.” He considers the modernist aesthetics in Arab art from a formative perspective, eschewing the Western conflation of modernism and progress, and highlights instances where an Arab aesthetic emerges in 20th-century art, some of which he ascribes to the rise of nationalism and pan-Arabism in the first part of the century. This point is further stressed in University of North Texas art history professor Nada Shabout’s essay “Collecting Modern Iraqi Art,” where she writes, “Serious art was expected as part of the political struggle to build new independent Arab nations.”

Among the earliest works described in Imperfect Chronology are undated drawings by Kahlil Gibran (1883-1931), which were probably made around the time he published his well-known work of prose poetry The Prophet (1923). They are paired in the exhibit with Armenian artist Ervand Demirdjian’s undated portrait Nubian Girl, which bears the influence of European figurative painting traditions and was also likely made early in the century. Demirdjian (1870-1938) studied art in Constantinople and at the Academie Julian in Paris, where he took a position at the Louvre, studying and copying masterworks from the collection. He would later become part of a diaspora, one of thousands of refugees who fled late 19th-century Turkish persecution in Armenia for Cairo, where he then lived out his life. He was known for his depictions of old Cairo and the Nile.

A shift occurred in the Arab art world around 1940, according to Kholeif, when Egyptian artist and activist Inji Efflatoun (1924-1989) introduced surrealist, politically charged elements and scenes of unjust persecution into her hallucinatory landscapes. At about midcentury, abstraction took root in the art of the Middle East, as did allegorical, symbolic works, leading to Hayder’s The Martyr’s Epic. Among some artists, allegory became an important, defining characteristic of the art produced in the 1960s.

The first section ends in 1967 with Hamed Ewais’ (1919-2011) Le Gardien de la Vie, which shows the figure of an armed fighter standing guard over scenes of daily life against a backdrop of scenes of contemporary Egypt engaged in nation-building. Kholeif describes it as “a highly significant painting that clearly seeks to embody the moment when the Pan-Arab ideal collapsed after the Arab defeat by Israel in 1967, the turning point often referred to as the Naksa (Day of the Setback).” Gilane Tawadros, founding director of London’s Institute of International Visual Arts, devotes an entire essay to 1967, framing it as the year where everything changed for Arab art. Tawadros explores the changes seen at the Venice Biennale’s long-standing Egyptian Pavilion between the years 1966 and 1968, in a decade that saw Egypt at war with Israel, entangled in a civil war in Yemen, and witness to an increasingly oppressive political regime. It took research on the part of the author to determine if Egypt was even included in the Biennale in 1968, as poor record-keeping initially indicated otherwise. Nevertheless, Egypt’s participation was reduced to the inclusion of only six artists — the new representatives of a postcolonial nation, poised to forge a contemporary identity.

Further discussion among the catalog’s authors elucidates how formal aesthetics, including motifs such as Arabic script, were integrated into post-1960s-era Arab art. In Palestinian artist and writer Kamal Boullata’s essay “Notes on Verbal Dominance and Visual Expression in Arab Culture,” the author places emphasis on Arabic language and writing in art as part of a continuum, writing, “By the seventh century, words, which had been the nomads’ indispensable medium by which their cultural heritage was preserved, were to attain divine status with the advent of Islam.” He also writes, “Since its earliest formations, Arabic was not only a language in which Arabs articulated meaning, but it also was a medium that penetrated every field of their lives and their aesthetic expression.” The book reproduces one of his own paintings, a hard-edge abstraction from 1983 called La Ana Illa Ana in which Boullata includes a quotation by a 10th-century mystic. Boullata discusses language as a means of expression that sees its most esteemed aesthetic form in poetry. But into this world, where verbal expression is of the highest value, studio arts also evolved, first gaining traction under the colonial influences of Britain and France. According to Boullata, the visual artist living in a land where language is regarded as the divine word faces the daily challenge of acceptance. “Artists in the Arab world have for long decades learnt to survive as aliens within their verbally dominated world and among mostly disinterested compatriots,” he writes.

Arab art seemed to thrive and flourish despite a series of setbacks throughout the last century, wherein artists have had to continually reassert themselves. Some Arab artists today — such as the Beirut-born sound artist Lawrence Abu Hamdan, Moroccan-based multimedia artist Yto Barrada, and Boullata himself — enjoy international recognition. But the modernist roots to which they may owe a debt are less visible and less tenable. Imperfect Chronology seeks to correct that. “The works brought together here also reflect the despair of conflict and exile, and the hope engendered by popular uprisings,” writes Blazwick in her introduction. Arab art, which must by necessity challenge power, is a shaper of regional as well as individual identities, a mirror to authority, and a reflection of the struggle for truth and justice. “These struggles are played out using hard power,” writes Sultan Sooud Al Qassemi, “but also soft power, of which the media, theatre and fine art are essential components.” ◀

“Imperfect Chronology: Arab Art from the Modern to the Contemporary: Works from the Barjeel Art Foundation,” is available from Prestel Publishing.

Arab art seemed to thrive and flourish despite a series of setbacks throughout the last century.