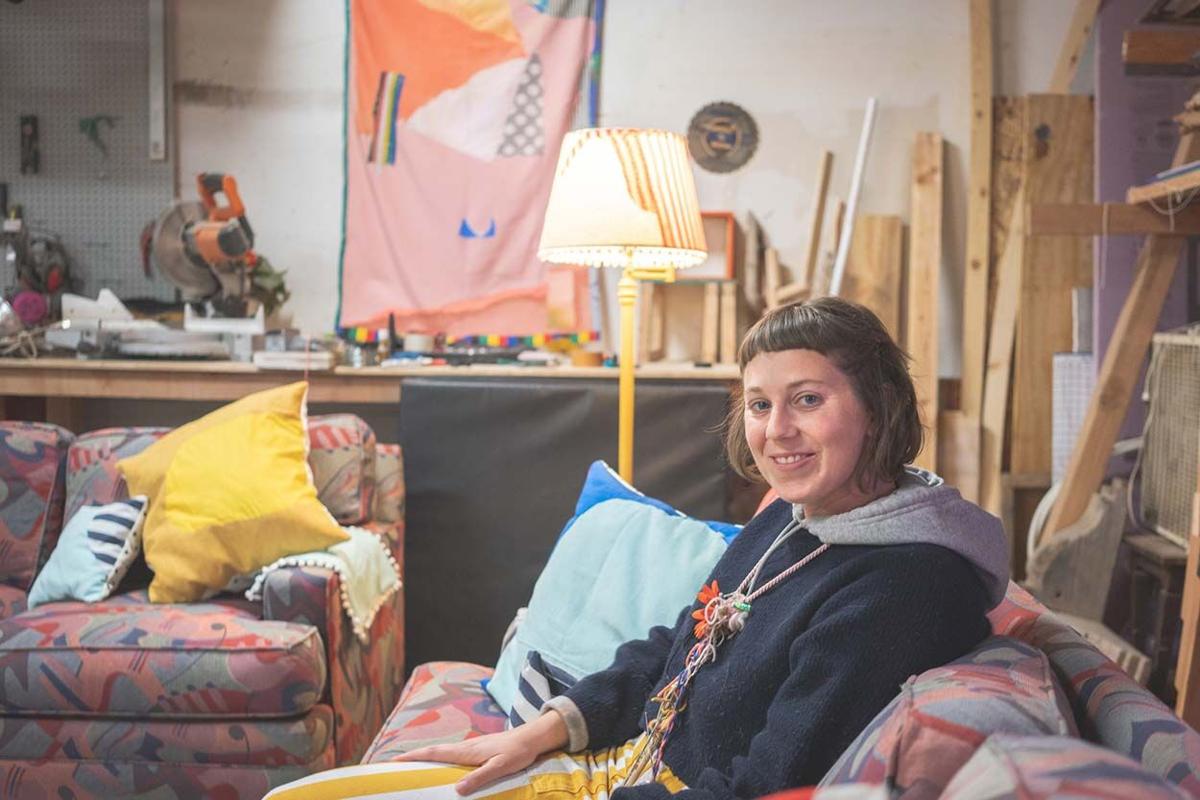 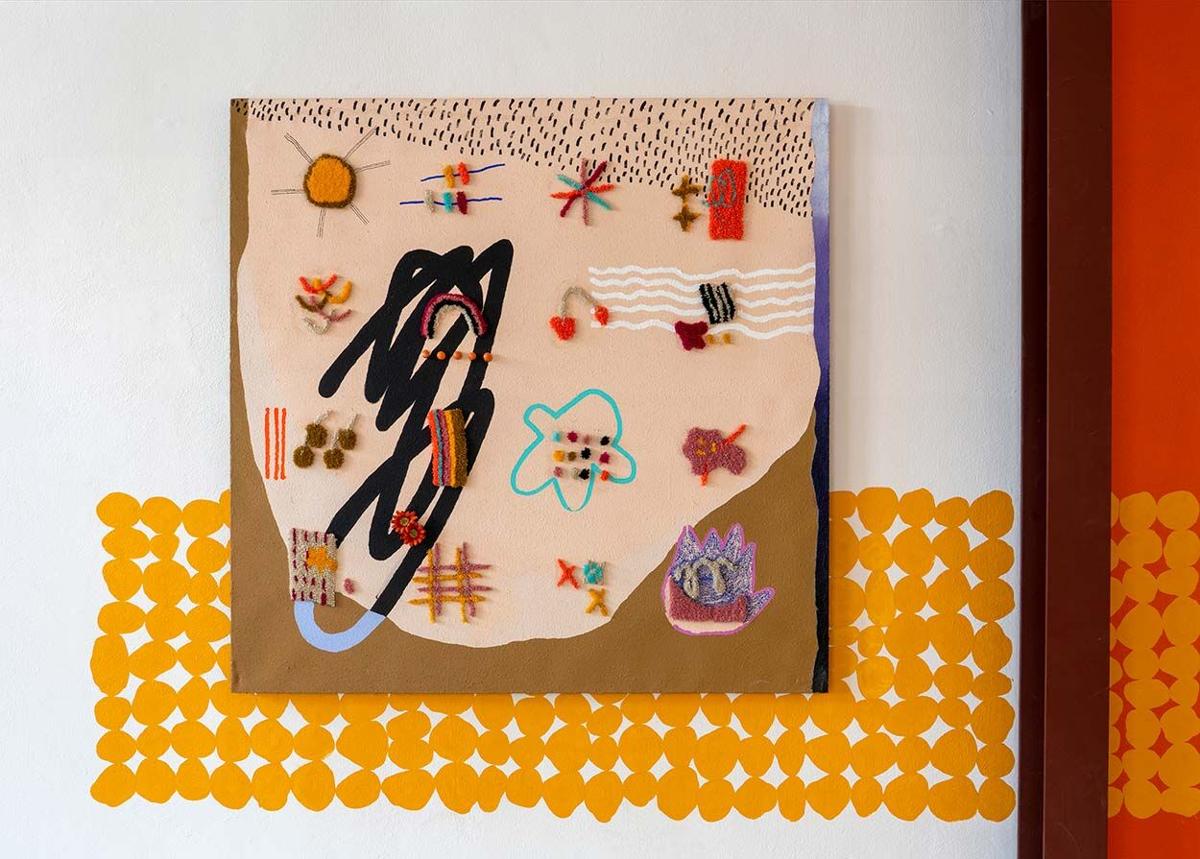 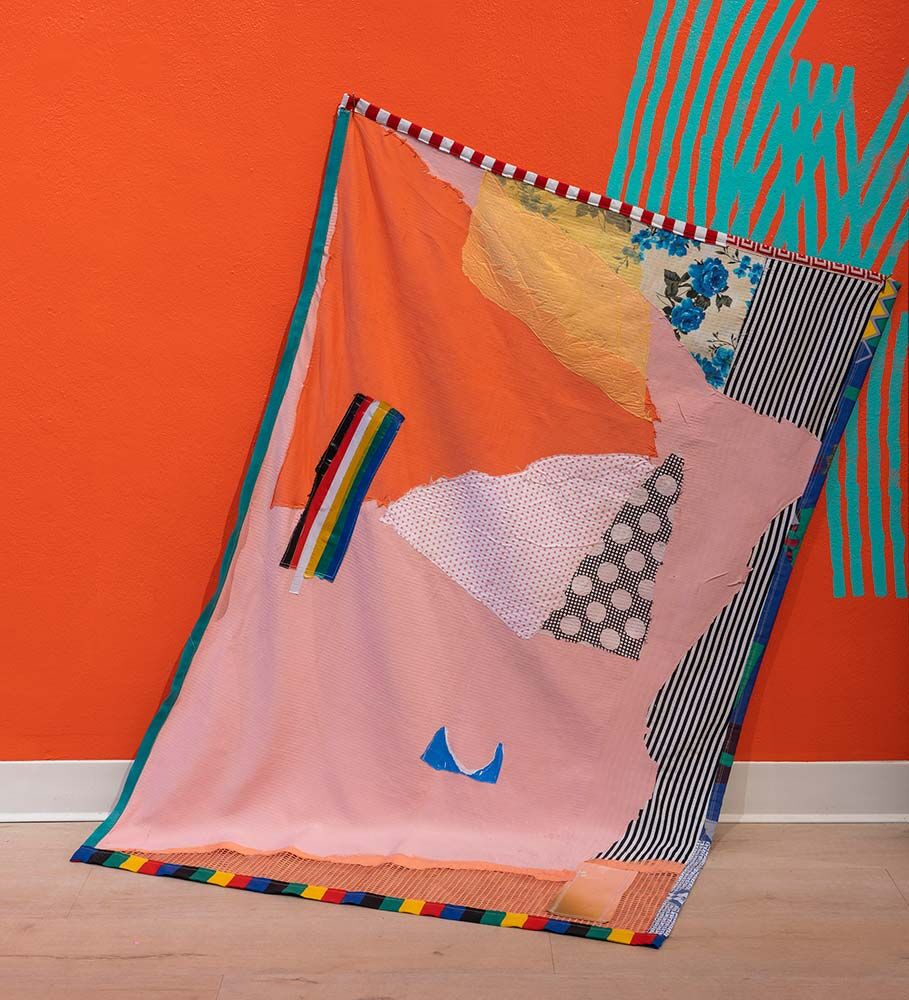 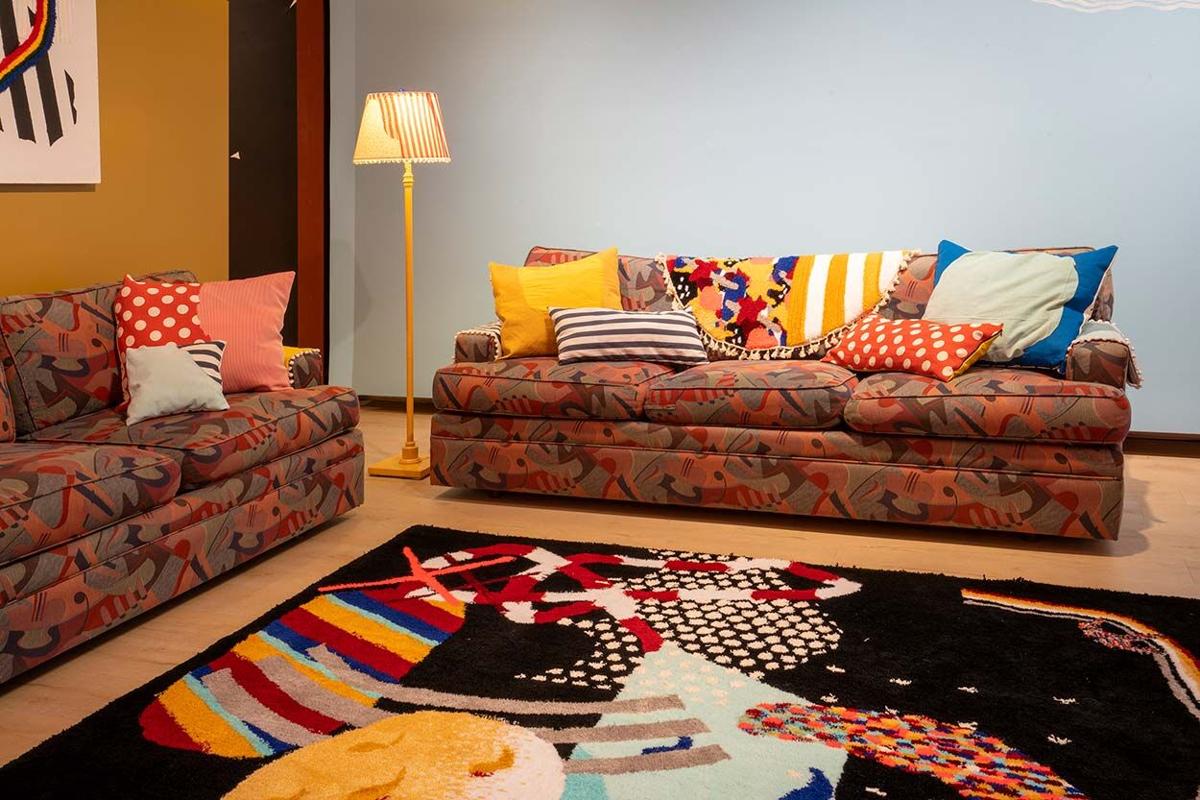 Taking an ordinary object — cast aside as trash or left to the whims of fate once it’s been discarded — and transforming it into art can open one’s eyes to the creative potential of just about anything. Maybe it’s an old sofa, a rusty lamp, or colorful piece of fabric that’s reworked into an abstract collage that still retains some of its printed pattern and color. To artists like Jackie Riccio, found objects are mediums unto themselves, every bit as much as paint.

Riccio blurs the lines between what art is and what it is not to the point where that line no longer exists. In her current installation, Land of Plenty, for instance, the gap between the gallery space and the domestic space is thin and transparent. The multimedia installation exists as art and as refuge, inviting the viewer to interact with it, to live in it for time, as though it’s one’s own living room.

“Riccio’s use of materials is fresh and unexpected,” says Richard Levy Gallery Director Viviette Hunt. “Many of her paintings include discarded objects, industrial materials, et cetera, and utilize processes that have been historically associated with craft.”

“I like to think that art is life and life is art,” says Riccio, 28, who grew up in Syracuse, New York, and just relocated to Philadelphia from Albuquerque. “It’s all just one big mess.”

Land of Plenty, on view at Richard Levy Gallery through March 12, has a playful sense of fluidity. For instance, a loose, unframed painting on canvas, bordered by tufts of green fabric, droops off the wall and partway onto the floor. Elsewhere in the exhibit, patterns of dots and lines form backdrops for wall hangings made with combinations of paint and fabrics. In one such abstract composition, Full Moon, a Hand-full of High Frequencies, and Your Mothers Best Dress (2020), a pattern of nine horizontal lines extends from the work itself out onto the wall, stretching up in an arc toward the ceiling.

But some work does hang as it would in a conventional gallery exhibition. A major difference is that, in Land of Plenty, the archetypal components of the typical living room — a pair of reclaimed sofas, a throw rug, and a floor lamp — are also objects of art. And with their vibrantly colored abstract patterns and shapes, and textile components, they match the art on the walls.

“Riccio has the gift of finding the extraordinary in what may appear to be the ordinary — a great reminder for all of us,” says Hunt.

“It just felt like Albuquerque was this trash landscape of things that I had been finding,” says Riccio, who created the work in the exhibit while she was still living in New Mexico. “And I deconstruct and reconstruct their identities in new landscapes. Wherever I am, I want to make things from that environment. I really like what’s cast away by others. I don’t really like to purchase things new; I don’t think it’s a sustainable practice. I do it when I have to, but I really like to make with things that already exist in the world. Often, that’s from thrift stores. I think thrift stores are especially interesting places to find culture. You really dig into what people kept in their houses or wore on their bodies for years and years of time. Found objects have a life of their own.”

As an immersive installation, Land of Plenty also bridges the divide between artist and viewer. Although it isn’t a personal space with autobiographical content, says Riccio, it is an expression of an internalized landscape. “It’s building an immerse, lived environment for someone to really feel like they’re inside of your head,” she says. “And I want you to feel that. I’m allowing others to enter the space and put whatever their own ideas are into it because it’s so abstracted. It creates a mood or environment to be in, but it doesn’t tell exactly what you’re supposed to be experiencing.”

Riccio’s home is her studio; the separation between the art world and the domestic world is illusory. And that’s something all of us working from home during the pandemic can relate to, as our personal and professional lives have meshed more than ever before.

“For me, the idea of being in my house all the time, or in my studio all the time, was not new to me,” she says. “Everyone’s like, ‘Man, I’m at home all the time, and I have to compartmentalize my time so I can be productive and, quote-unquote, go home from work.’ Artists, we’ve been doing this our whole lives. Because my work is making art, I don’t ever really leave work. Every nook and cranny of my day is filled with something that’s moving in the direction of creativity and art. I just meander through my domestic space-slash-studio as I please, and allow one thing to inspire the next and move through time that way. I don’t really think about being at work or being off of work.”

Land of Plenty is open by appointment only, starting on March 2. On Richard Levy Gallery’s website, visitors can take a virtual tour and view a recorded interview with the artist. In a way, the virtual format adds one more layer of surreality to the experience: a pseudo-domestic interior intended as an immersive installation but, in advance of March 2, only viewable remotely.

“If feels almost like an Ikea showroom or advertisement because no one can sit on the couches, no one can sit on the rug,” Riccio says. “It’s not yours to have because you’re only looking at it on a screen. That’s super weird. I’m still trying to wrap my head around what that means. I just made a bunch of art for people to interact with but they don’t get to.”

The installation’s title is not specific to the installation; it’s also what Riccio calls her home studio, a core concept in her creative output. “What originally drew us to Jackie Riccio’s work was how her life and art practice are so integrated,” Hunt says. The name was inspired by New Mexico’s state motto, The Land of Enchantment, and it’s a reference to what that land provides. In the case of Riccio, who moved from the East Coast to New Mexico in 2015 to attend a printers’ training program at Tamarind Institute, it provides found objects and trash: riches for those, like Riccio, with the eyes to see them as such.

“I really appreciate that everyone brings to the work whatever they’ve got going on in their mind, their life, and their creative imaginations. I get to the opportunity to set up a time and a space for you to have that experience of going back into your memory and back into yourself.” ◀

By appointment starting March 2 or online