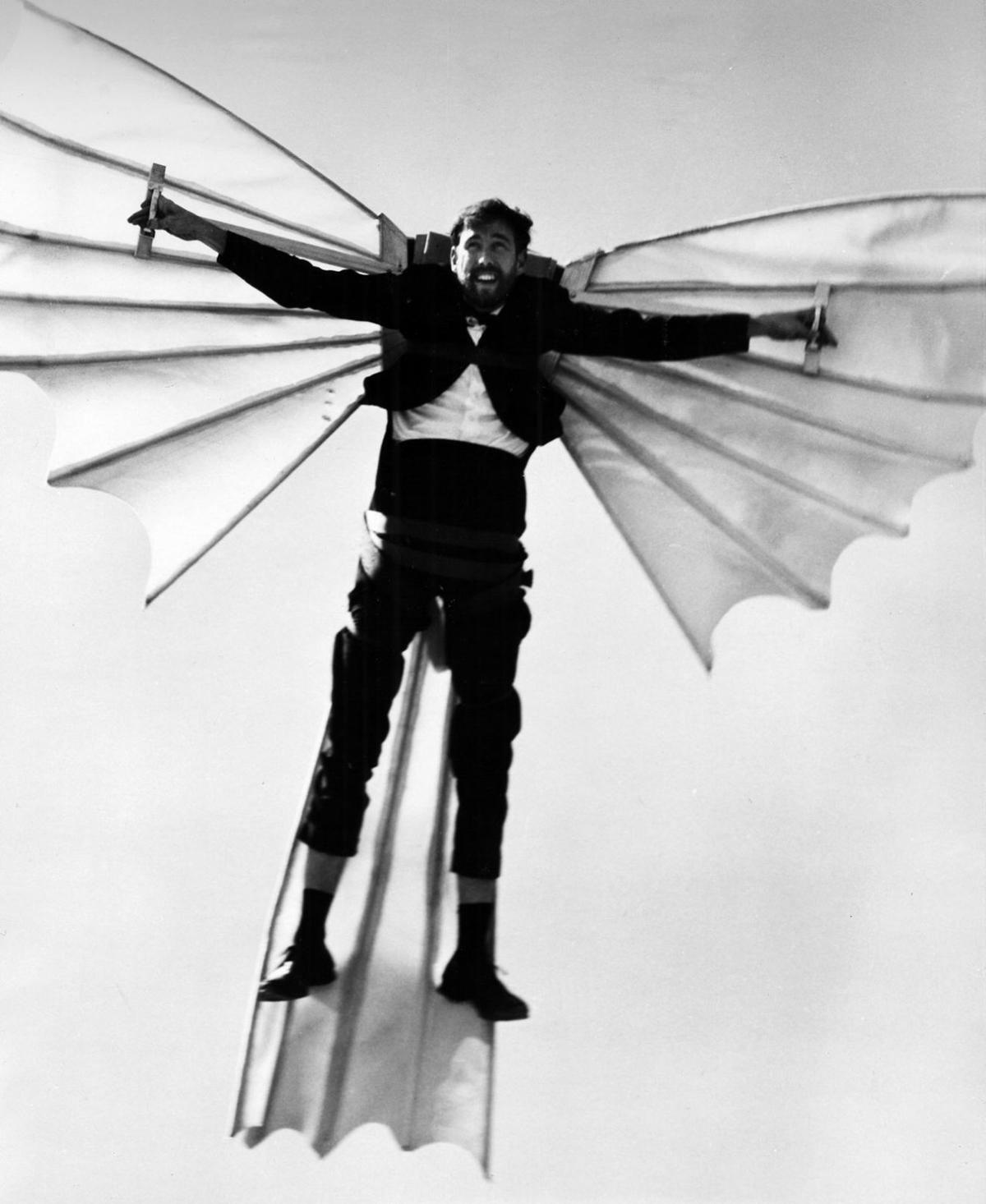 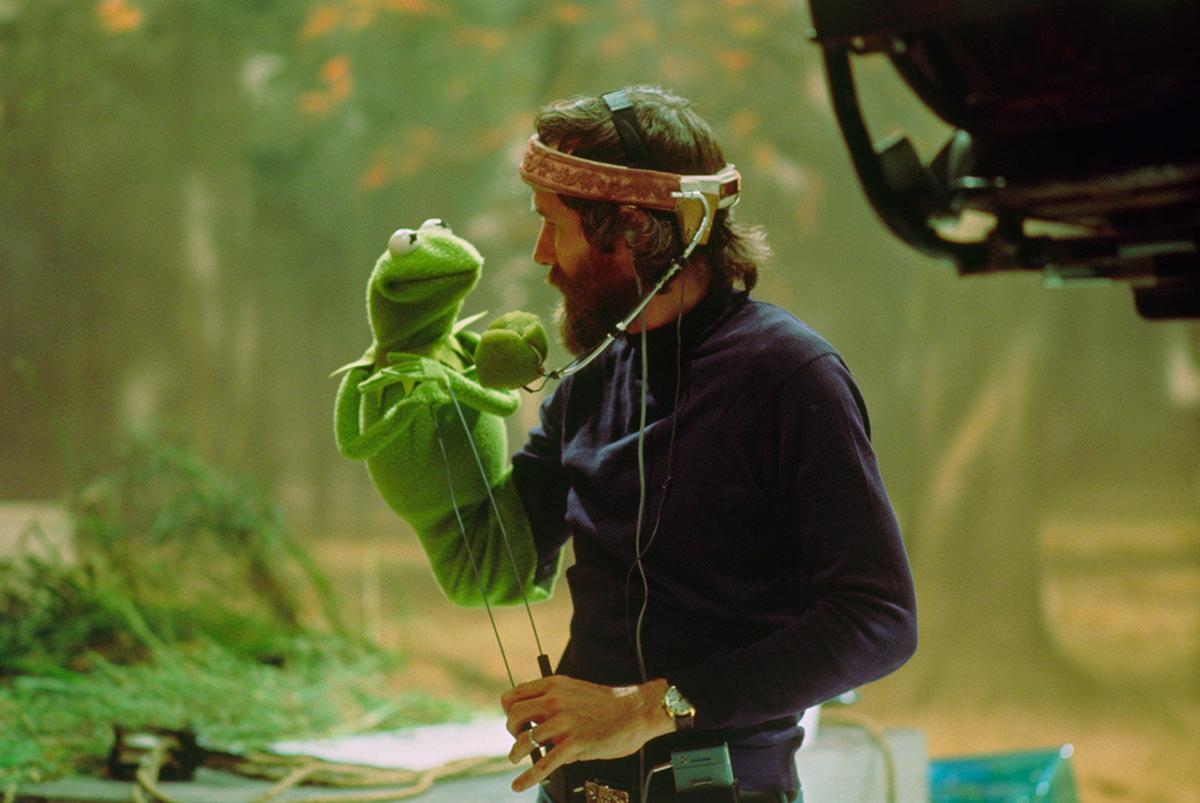 Jim Henson has a moment with Kermit the Frog, courtesy Sesame Workshop 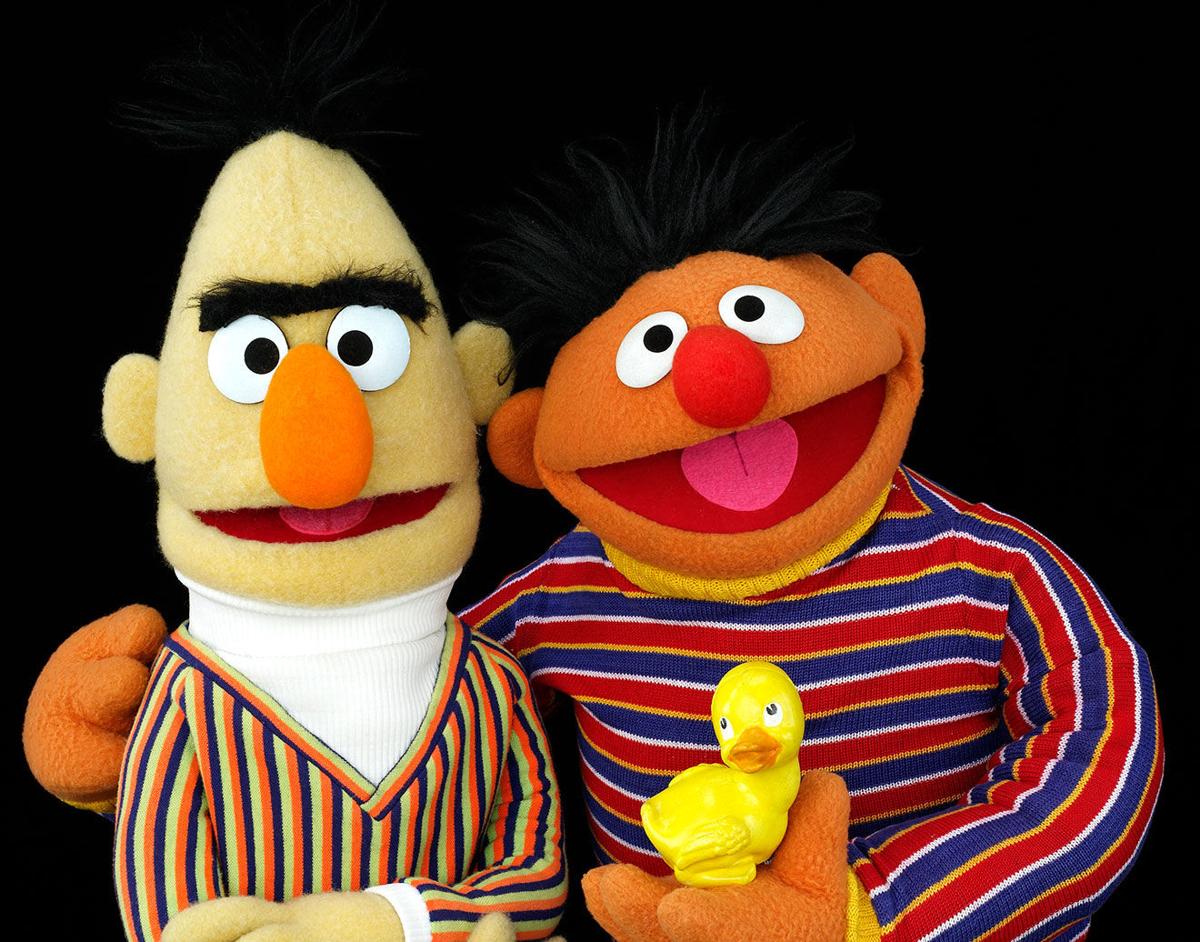 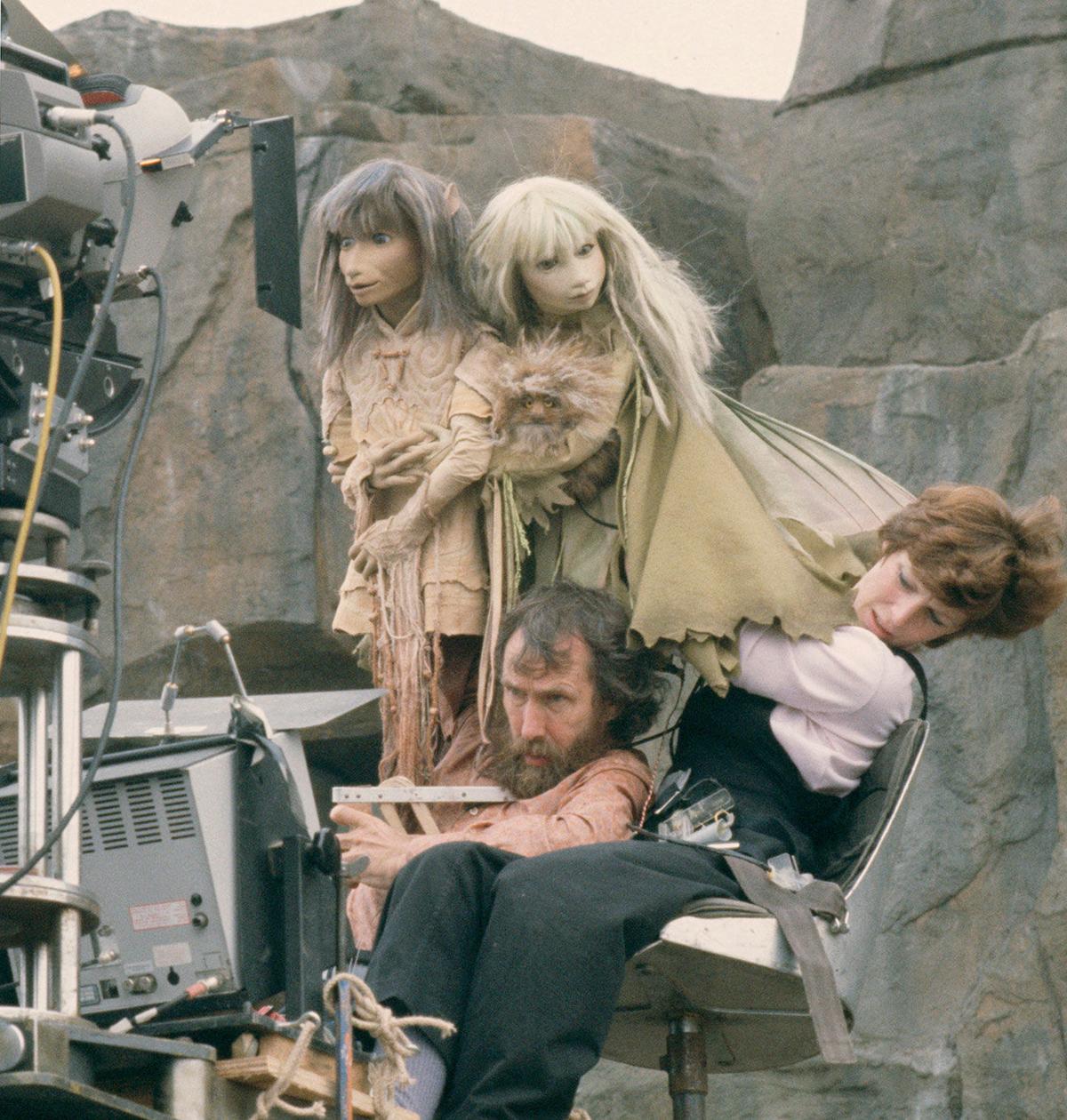 Jim Henson and Kathryn Mullen watching the monitor and performing the puppets Jen and Kira on the set of The Dark Crystal in 1981; photo Murray Close, courtesy the Jim Henson Company

Jim Henson has a moment with Kermit the Frog, courtesy Sesame Workshop

Jim Henson and Kathryn Mullen watching the monitor and performing the puppets Jen and Kira on the set of The Dark Crystal in 1981; photo Murray Close, courtesy the Jim Henson Company

In 1975, musician Buffy Sainte-Marie was walking down a remote Northern New Mexico road when she happened to stumble upon Big Bird and his friend Luis. Sainte-Marie was looking for Taos Pueblo (“It’s way on the other side of that hill over there,” Luis offered), and the big yellow bird — as well as Sesame Street regulars Bob, Maria, and Gordon — were helping to build an adobe house on the Luis family’s ranch. (Oscar the Grouch went, too, and was quickly homesick for the city.)

Sesame Street focused six episodes on New Mexico that year. The cultural and ethnic diversity on display was reflective of Sesame Street’s mission from the start, says Santa Fe resident Ann Burgund, a filmmaker who created short, live-action segments about animals and nature for the show from 1969 until 1974. She says that in the early days of the show, the team was small and tight-knit, and she came to be good friends with Henson.

“Jim was the most quiet person. He spoke in the most quiet voice, and he actually spoke very little, because he was really involved with the creative process,” she says. “He was brought into Sesame Street to execute the educational vision, which he did so brilliantly.”

Jim Henson created Big Bird and the other Sesame Street Muppets for the long-running educational children’s program that premiered on public television 50 years ago. Henson went on to create The Muppet Show (1976-1981) and direct The Great Muppet Caper in 1981 (the second of 14 Muppet movies), and to create the show Fraggle Rock (1983-1987) and cult favorites The Dark Crystal (1982) and Labyrinth (1986), among many other projects. He grew up in Mississippi and Maryland but later developed strong ties to New Mexico, where his family owned property and frequently vacationed. Though the rest of the film was made in London, the opening sequence of The Great Muppet Caper was shot in Albuquerque with Kermit the Frog, Fozzie Bear, and Gonzo floating through an impossibly blue sky in a hot-air balloon.

With his adorably quirky puppets and talent for world-building, Henson offered an unusual brand of entertainment. Whether you prefer the innocence and wonder of Sesame Street, the knowing primetime antics of The Muppet Show, or the near-treacherous environments of his 1980s fantasy films, something about Henson’s vision appeals to the heart and to the head, regardless of one’s age. Henson died in 1990. Today, his legacy and passion for puppetry are carried out by his children and the scores of artists who have been inspired by him.

“Jim Henson wanted the Muppets to be known as entertainment that’s appropriate for adults, as well as children,” says Andrew L. Connors, director of the Albuquerque Museum, where The Jim Henson Exhibition: Imagination Unlimited opens on Saturday, Nov. 23. “Kids may not immediately recognize all of the jokes on Sesame Street, yet they appreciate the physical humor that goes with what might be a more sophisticated joke. I remember being astonished at how much my dad loved The Muppet Show. He was in his 60s at the time, and he thought it was hysterical.”

Visitors to this traveling exhibit from the Museum of the Moving Image in Queens, New York, will see more than 20 puppets, as well as character sketches, storyboards, scripts, film and television clips, behind-the-scenes footage, and costumes related to Henson’s career. One interactive exhibit component invites museum-goers to design a Muppet-like character. Another allows them to try puppeteering in front of a green screen and watch the action on a monitor with superimposed backgrounds.

To be able to see a puppet onscreen while he was manipulating it from below was an important part of Henson’s process, Connors says. “Most of the time, actors don’t see themselves in the act of acting, live. With the Muppets, Henson’s head was usually below camera level. He could watch himself on a monitor and really understand what effect the slightest movement of his hands was making on the expressions of the character.”

Albuquerque resident and veteran puppeteer Michael McCormick says that seeing puppets he built for The Dark Crystal in their first screen test was one of the best days of his life. He was discovered by a member of the Henson team in 1979 doing a Punch and Judy puppet show in Santa Fe during Fiesta. A few weeks later, he was ensconced at the Henson Studios in London, creating the prototype for the character of the Garthim Master of the Skeksis — the reptilian, bird-like race that rules over the land of Thra in the complexly plotted movie.

“Frank Oz performed the puppet,” McCormick says, still sounding awed by working with the legendary puppeteer. (Oz also performed the Muppet characters of Miss Piggy, Fozzie Bear, Animal, Cookie Monster, Bert, and Grover, among others.) That screen test was the first indication McCormick had that his puppet would be visually believable on film. “The proof is in that particular pudding. It was some kind of sensation when I realized it was going to work. Should I say it was a relief? It was fabulous.”

The viscerally creepy Skeksis of The Dark Crystal were a major departure from the soft and cuddly Muppets the world was used to. McCormick said making the bird creatures look so repellent involved a lot of texturing and “schmutzing” the costumes — which created a roughness he thinks is lacking from the current Netflix prequel series, The Dark Crystal: Age of Resistance. While the production’s 3D printing technology impresses him, “the schmutzy aspects that make the surfaces look used are missing. As far as 3D goes, I guess that’s unnecessary detailing from [the artists’] point of view, but to us it was really important.”

Connors marvels at the longevity of Henson’s characters, especially his best-known creation, Kermit the Frog. He describes Kermit as the good-natured everyman, an alter ego who gamely shoulders the world’s ridiculousness. He mentions that Kermit wasn’t even a frog but a lizard-like creature with no collar when he first appeared on Henson’s show Sam and Friends, which aired on WRC-TV in Washington, D.C, from 1955 to 1961. More than six decades later, Kermit is the de facto Muppet spokesman who is, among other things, a television reporter, a romancer of a comely lady pig, and a long-suffering theater stage manager. And he is the singer of “The Rainbow Connection,” the Paul Williams song that was made famous in the opening sequence of 1979’s The Muppet Movie. Although sung by a frog puppet, the song was so massively popular that it reached No. 25 on the Billboard Hot 100 chart that year.

When considering Henson’s impact and contribution to the world, early Henson collaborator Burgund gets choked up. “I think about his last words to his children, which were to please watch out for each other, and love each other, and forgive everybody. He said, ‘It’s a good life; enjoy it.’ ”

Henson’s ashes were scattered in the Sangre de Cristo foothills near Taos. Although The Muppet Movie opens in a swamp, Henson might have been thinking about New Mexico’s plethora of summer rainbows when he gave voice to the timeless lyrics that sum up the magic of his creations:

And rainbows have nothing to hide…

The lovers, the dreamers and me… ◀

children 12 and under no charge, special surcharge