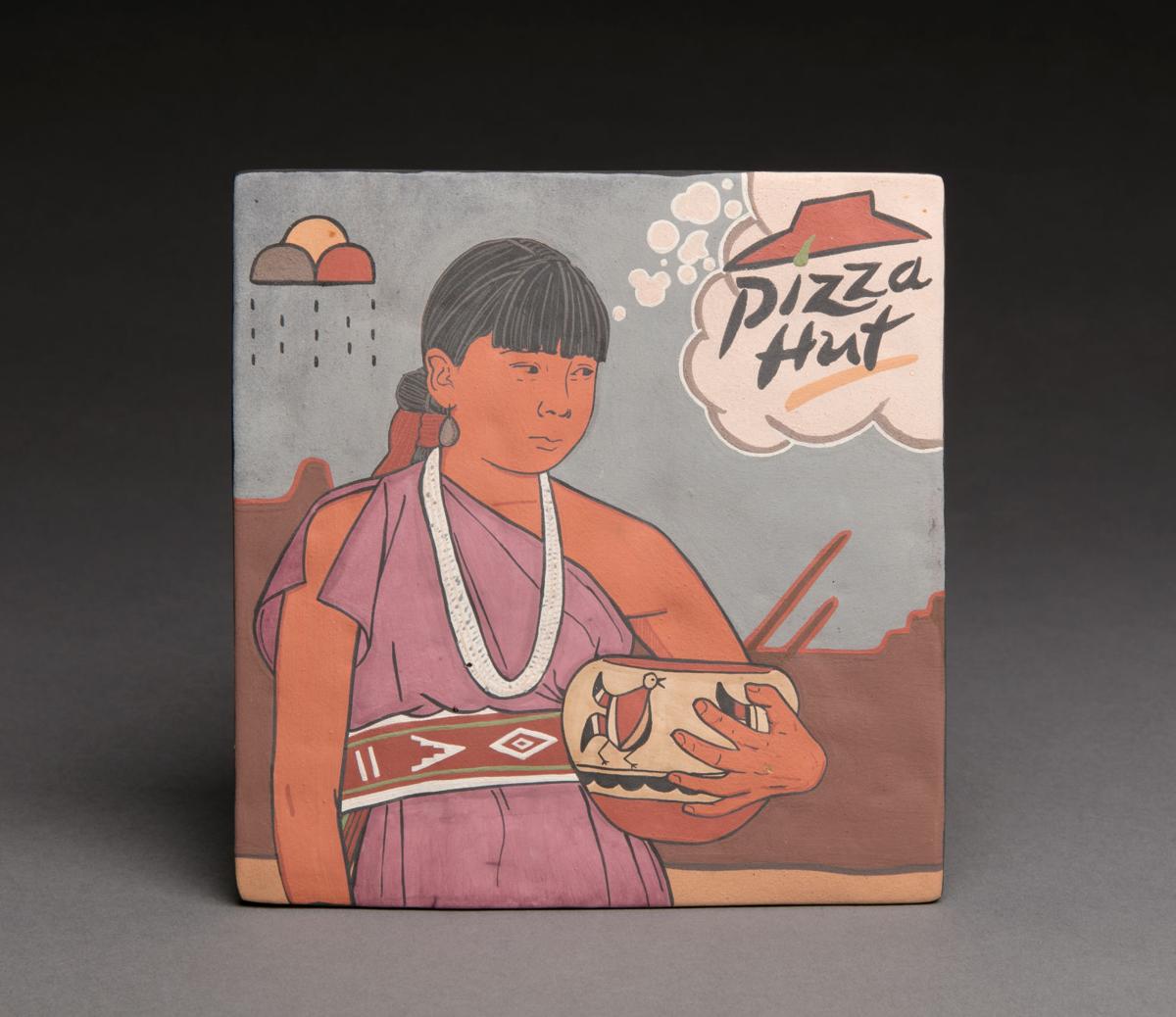 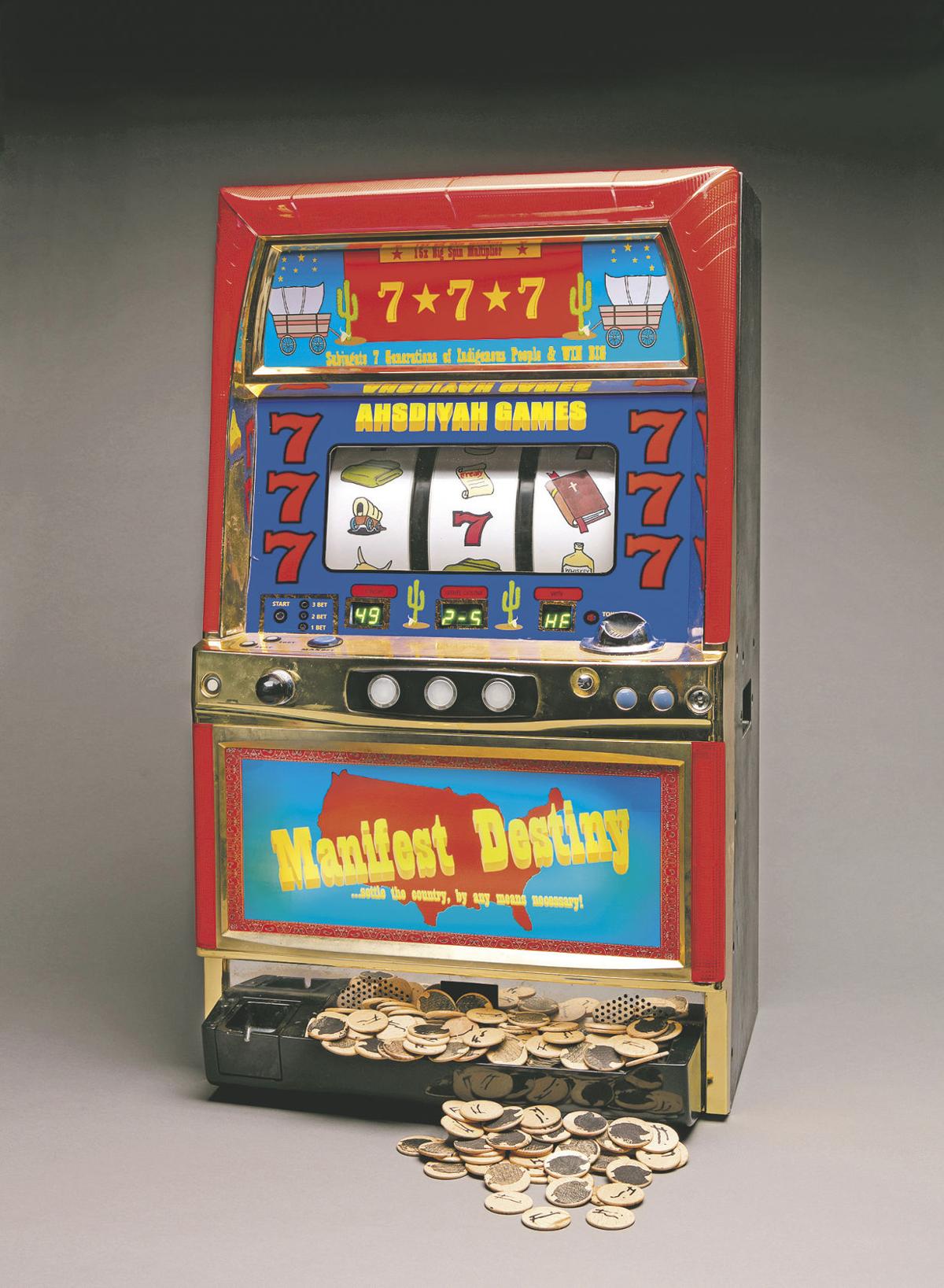 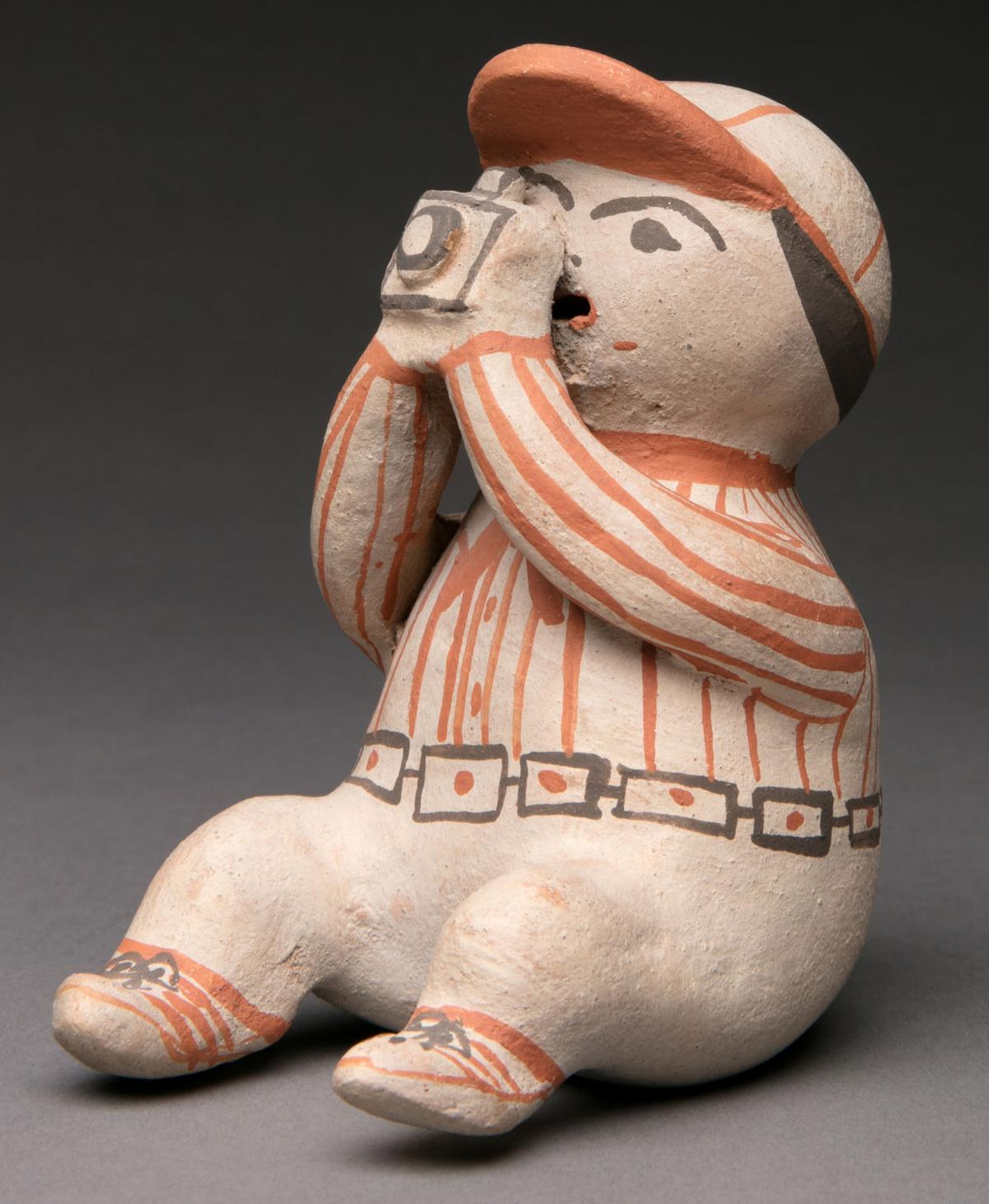 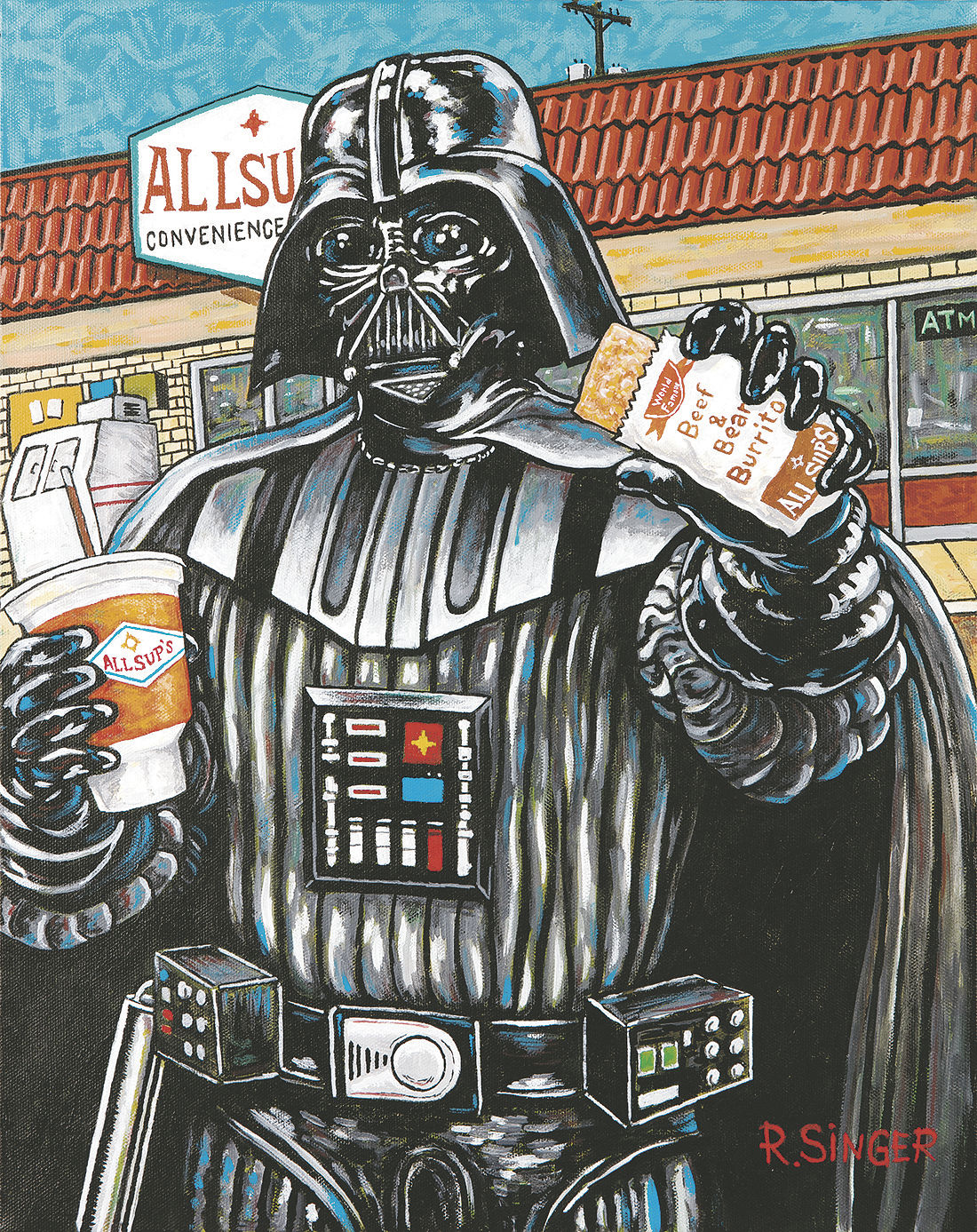 When Leonardo da Vinci painted The Last Supper in the 1490s, he probably didn’t foresee that, centuries later, a Native American artist would appropriate this piece of the collective consciousness to parody the drama and controversy of Santa Fe Indian Market.

The painting depicts the last meal Jesus had with his apostles before he was crucified by the Romans, when he announced that one of his closest associates would betray him. In Cara Romero’s photo Last Indian Market, a figure with a scruffy buffalo’s head sits at a long dining table, flanked by 12 people posed similarly to those in Leonardo’s masterpiece. Depending on your familiarity with indigenous art makers, you might recognize some of the modern-day apostles: they include filmmaker Chris Eyre; jeweler Kenneth Johnson; fashion designer Pilar Agoyo; and painter and printmaker Linda Lomahaftewa.

Founded in 1922, the annual Santa Fe Indian Market has become a high-stakes art sale that has gotten more competitive in the last five years or so, a scenario that can breed bad feelings among people who don’t get in or who feel overshadowed by the celebrity of other Native artists. For some Native American tribes, the buffalo is a symbol of self-sacrifice, an animal that gives of itself for the benefit of others. In Romero’s photograph, the man with the buffalo head, who is a stand-in for Jesus, might be helpless to remedy the situation around him. Or, he might be responsible for it. (His body language is ambivalent.) And he happens to be wearing a white leisure suit like John Travolta’s in Saturday Night Fever.

“There are a lot of metaphors to read into Last Indian Market. The artist is purposefully vague about its definitive meaning,” says Denise Neil, curator of Laughter and Resilience: Humor in Native American Art, opening at the Wheelwright Museum of the American Indian on Nov. 10.

Still, Neil says, Romero’s photograph pokes fun at the expectations that artists put on Indian Market, which is considered by many to be the reputation-making, be-all, end-all Native art market.

Last Indian Market reflects the central themes in the show, displaying a sort of subtle, absurdist humor that is likely to resonate more strongly and on more levels with some viewers than others, depending on their familiarity with Native people and issues.

“There’s really nothing in the exhibit that will make people think of the Native art that they know or are comfortable with,” says Neil, a member of the Cherokee and Delaware tribes. She earned a doctorate  in Native American art history at the University of Oklahoma and now serves as the executive director of the 45th Infantry Division Museum in Oklahoma City. She curated Laughter and Resilience while on a fellowship from the Andrew W. Mellon

“Native museum visitors won’t be confused, but some non-Native folks might be scratching their heads. I hope that we can educate the non-Native audience about the humor and the meaning in these works of art. The hope for any exhibit is that people come away knowing something they didn’t know before.”

Like most of the pottery, painting, jewelry, and work in other mediums in Laughter and Resilience, Last Indian Market represents a departure from what many expect from Native artists. While some of the craftsmanship and forms might be anchored in familiar traditions, the work includes references to popular culture and commentary on current social issues that Native Americans face — including the effects of colonialism and the sense that many non-Native people consider them to be relics of the past who don’t live in the modern world. Not all of the pieces aim for such depth, however; the joke might be in the judgmental facial expression of a woven dog, or a painting on a clay tile of SpongeBob SquarePants performing a corn dance.

The exhibit’s 61 pieces are arranged in sections — “Whimsy,” “Tricksters,” “Satire and Parody,” and “Cartoons and Cartoonists” — almost all made in the 20th and 21st centuries by living artists. Twenty-two pieces come from the Wheelwright collection; others are on loan from other institutions, collectors, and artists. Included is a 1994 series of cartoons (originally published by Zuni A:shiwi Publishing) by the late Zuni artist Phil Hughte that are about 19th-century anthropologist Frank Hamilton Cushing.

“Cushing had very underhanded ways of getting in to see things and manipulating information out of certain people at Zuni. He intruded on Zuni life and shared information that they never wanted out. He eventually took to calling himself a chief and took on all kinds of personas of being indigenous. He certainly wasn’t,” Neil says. One cartoon ridicules famous photos of Cushing in Zuni regalia, while in another, he bathes in a river where women are gathering water — which Neil says exposes his fundamental lack of cultural knowledge. “He didn’t really know enough to interact properly.”

The theme of Leonardo’s painting returns in Hughte’s The Last Supper, in which Cushing sits at a table under palm trees as a waiter delivers him a platter of fish — a reference to his death after choking on a fishbone in 1900. In the cartoon, a black cat crosses his path and the feather he wore in his hair is falling to the ground.

Many works in the show feature the coyote, including The New Arrivals, an oil painting by Navajo and Laguna Pueblo artist Steven Yazzie. In it, a friendly but mischievous coyote stands on a blue midcentury modern chair, his expression asking you to pet him and yet telling you to be careful. The chair sits in an office that is being reclaimed by nature. Birds flutter in the air and puddles of mud or oil ooze from the baseboards. An outdoor scene on the back wall might be a painting or it could be a window. Or maybe the wall itself has already crumbled into the earth.

“For the Navajo, the coyote plays an important role in our stories of unpredictable and ambivalent behaviors, constantly testing and pushing the limits of harmony, discord, and order,” Yazzie writes in the exhibit’s wall text. “I became interested in the coyote as an instigator in larger contemporary narratives of adaptation in the face of extreme environmental changes and continued population growth into the natural world.”

Ben Calabaza is producing short documentaries about Native standup comedians that will run in the exhibit. He says that Native humor is founded in oral traditions and was later integrated into 2D and 3D works. A major theme of the humor is about encouraging humility and keeping egos in check, which came into play while he was making a documentary about Bobby Wilson, a member of the indigenous sketch comedy troupe The 1491s. “We were backstage with The 1491s and the guys started to tease Bobby about [being featured in] the project. It wasn’t because they were jealous that it wasn’t about them.” It was about keeping Wilson “level-minded,” and it was loving, not malicious.

The teasing can be less gentle yet still subtle when it’s aimed at stereotypes that non-Native people might hold about Natives — or about themselves. Kenny Glass’ My Great Grandmother’s Cherokee Princess Dress is a shiny blue ballgown displayed on a full-sized dress-form that looks like something Cinderella would wear, but the handmade lace embellishments resemble Cherokee basket-weaving. Neil says the piece lampoons Americans of European descent who make fuzzy claims to Cherokee heritage. The dress is displayed in conjunction with Bob Haozous’ copper and turquoise crown, One Size Fits All, a commentary on the same sort of faux-indigenous lore, which sometimes includes romanticized ideas about princesses and Native American royalty.

You have to love this trend. No need to be coy. The majestic history of New Mexico will survive a little humor and irony. Show us what you've got. We love Chaco but we can and will also love the new age of native art.