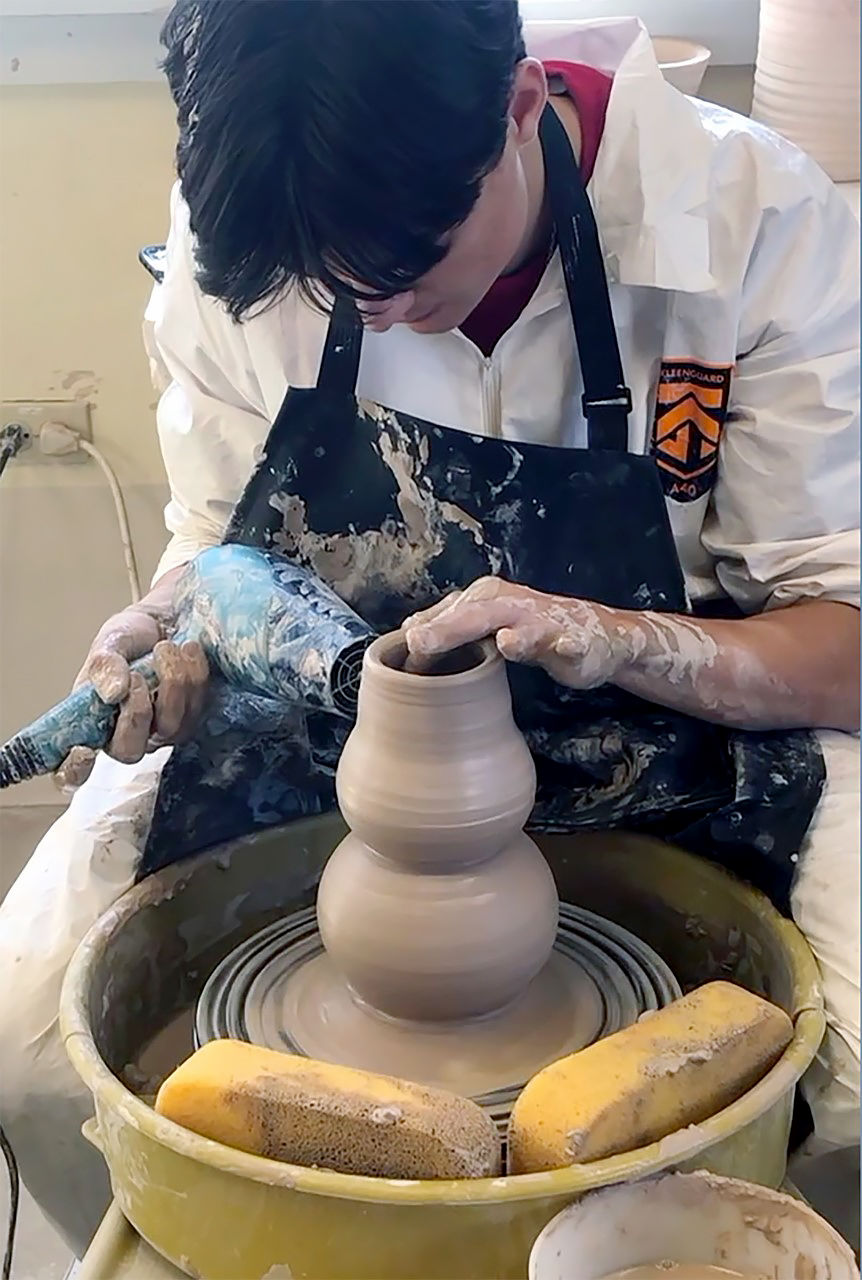 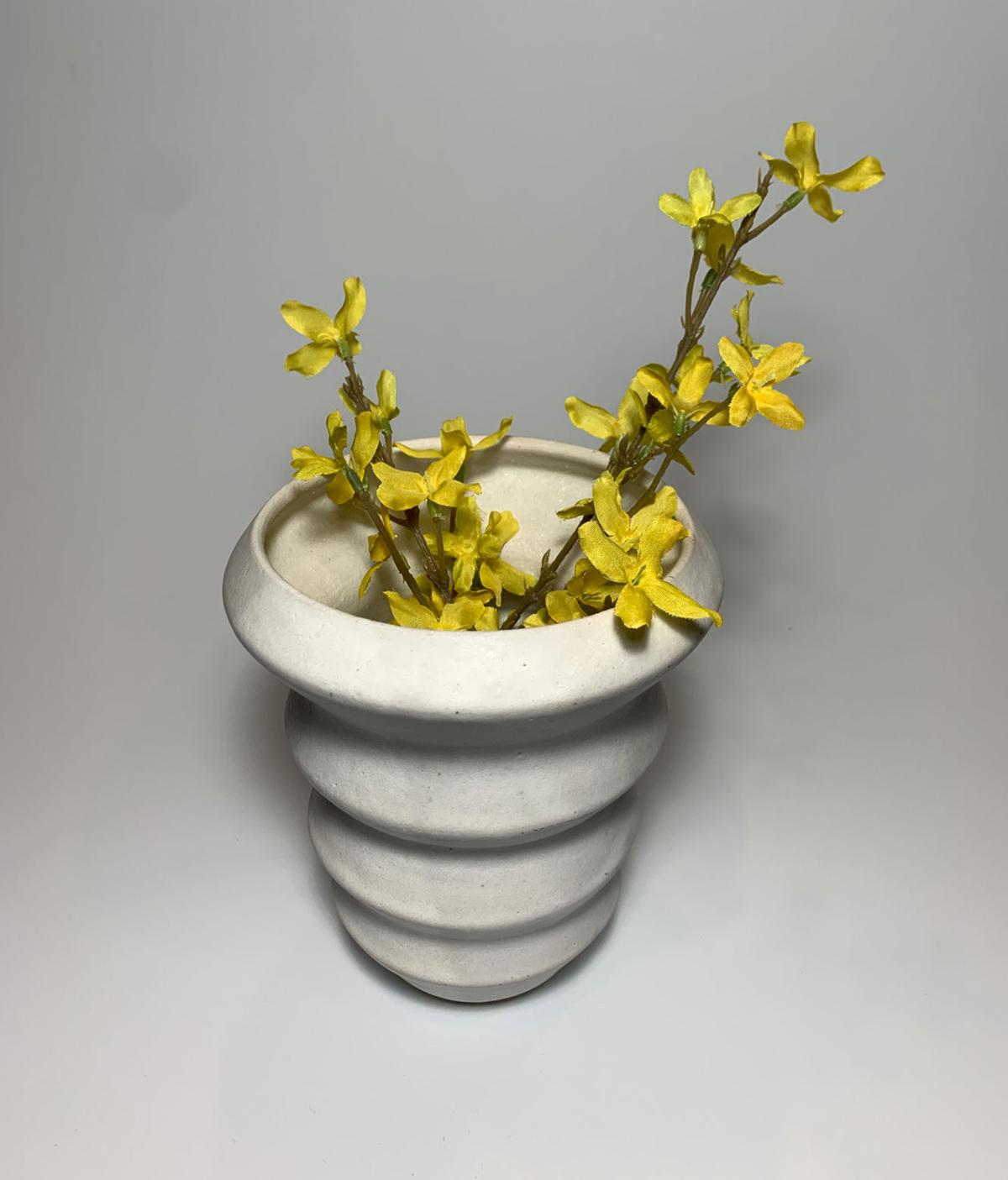 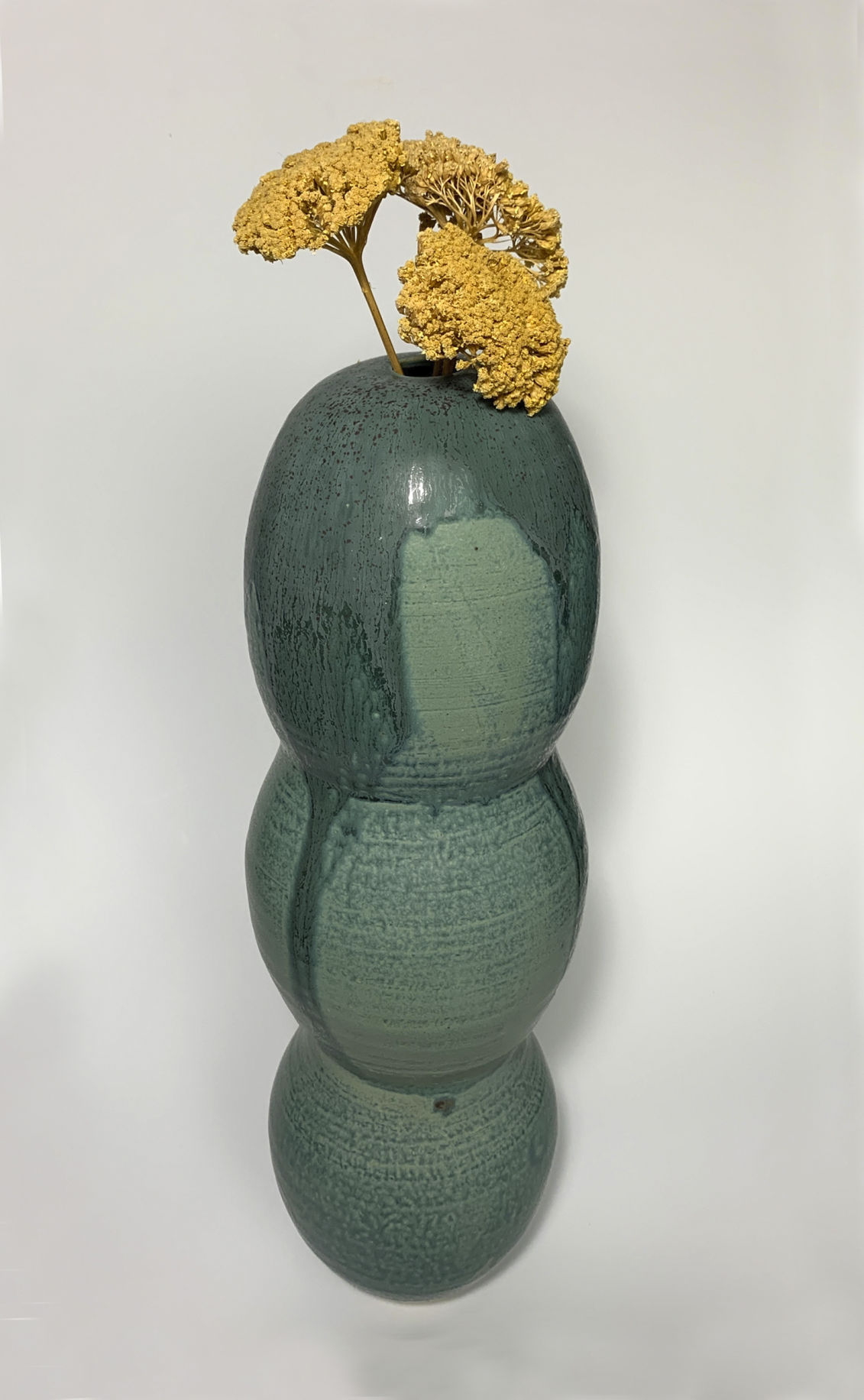  Once the bell rang on the last day of the school year, textbooks, homework, algebra, and English were the last things some of us wanted to think about as we charged full steam into summer. But for two students at Santa Fe Prep — Liam Badger and Xander Hnasko — summer is a time to hone and market the skills they learned in school. Their plan for the season? Work, work, and more work.

You’d probably never suspect that the items for sale at the newly founded Canyon Road Pottery (canyonroadpottery.com) — latte cups, Tonkotsu ramen bowls, and vases with simple, modern, stately, and elegant shapes — were made by 17 year olds. But this is the handicraft of two entrepreneurial souls, decidedly mature for their age. That maturity is reflected in the apropos names they give their pieces, like the two-tone vessel they call The Raven, tan with feathery streaks of black, or Foothills, a ridged, textured pot in desert colors inspired by the landscape of the Southwest. They even sell a pot with a matte black finish they call Pasatiempo.

Badger and Hnasko are selling these wares to raise money for The Santa Fe Food Depot. The prices range from $30 for a small piece like the latte cup to $350 for the Full Moon, a 10½-inch vase with a glazed interior and a single, wide, stroke of black on its spherical body, made using a Japanese bamboo brush soaked in black ink.

The two just finished their junior year. They plan to spend their summer squirreled away at Badger’s home where they’ve set up a makeshift ceramic studio. “Liam has a kiln and a wheel in his garage,” says Hnasko, who learned his craft, along with Badger, under Santa Fe Prep ceramic instructor Laura Scandrett. “She’s actually moving away, and she was kind enough to sell me her wheel at a very discounted price. I’ve got that set up in Liam’s garage as well.”

Their summer plans stem from their involvement in Empty Bowls, an international program started by artists to help care for and feed the homeless. Santa Fe Prep ceramics students participate annually by producing work to raise money for local food pantries. “Prep has this amazing community service program,” Badger says. “One of the options for that is Empty Bowls. We were lucky enough to get accepted to it. That allowed us to grow our passion for ceramics while still creating community connections. We decided, OK, we have this model of what Empty Bowls is. Given that it’s a proven model that gives back to the community, we would like to do that over the summer and try to make a difference.”

Badger and Hnasko, who grew up in Santa Fe as neighbors and have known each other since age 2, first took up ceramics in the 8th grade. Over the course of ensuing semesters, they fell in love with it. “Our teachers were really supportive,” Badger says. “Laura Scandrett took us under her wing and really helped us grow. She fueled the fire, if you will.”

Through their website, they’re hoping to attract an audience interested in the artistic aspects of the craft, particularly since they’ve honed their skills to a sophisticated degree. As of June 12, the site was up and running for less than two weeks. In that time, they made about $400. They set themselves a goal of reaching $1,000 by summer’s end, at which time they’ll donate 100 percent of the proceeds to the Food Depot. Just $1 provides up to four meals to those in need, according to the nonprofit’s website (thefooddepot.org). If Badger and Hnasko reach their goal, and it seems likely that they’ll exceed it, that’s 4,000 meals.

“It is heartening to see them give back to the community and help others, particularly at this time,” says Scandrett, who also teaches Prep’s experimental media, 3D studio, and new media courses. “I’m impressed with what they have achieved with their ceramic work in three years and now am even more impressed by their initiative to work independently.”

At this stage, Badger and Hnasko are unsure of whether art is something they intend to pursue as a career. But as they plan for their higher education, colleges and universities with strong ceramic programs are, so far, factors in the schools they’re considering. “One school that I’m seriously pursuing is Rhode Island School of Design,” Badger says. And Hnasko is looking into Brown University, which, like RISD, is located in Providence, Rhode Island. “The facilities at RISD are open to Brown’s students so I could take advantage of the ceramics studio,” he says. “The Claremont colleges in California, particularly Pomona, are also high on my radar. They also have a wonderful ceramics facility.”

But they’ve still got one more year of high school, during which Prep students have the option of joining the Senior Teen Action Program (TAP). The program pairs students with local agencies, schools, and nonprofits where they work a minimum of 45 hours throughout the school year, learning professional on-the-job skills. Instead of waiting for the school year to begin, they opted to complete their TAP requirements by working on the pottery for their online business over the summer. “Right now, we’re working every single day for at least 8 hours,” Hnasko says. “We’re going to be well over the 45-hour mark.”

They fully intend to continue the pottery business into their senior year, as well, although they know the demands of schoolwork and applying for colleges means their productivity will decrease. Still, they’re grateful to have a place on campus — the ceramics classroom — where they can retreat when the academic pressures build.

“It’s an outlet for me that I definitely need in order to function,” Badger says. And Hnasko agrees. “Prep is extremely rigorous,” he says. “Long hours. Long days of homework. To be able to have four hours a week to go into the ceramics classroom, it’s rather meditative. You sit down, it’s silent, and you’re throwing your own vessels, creating something from nothing. It’s a mind break. It’s something that’s become important for the soul for us in many ways.” ◀

Way to go Liam and Xander, your work looks great!

I am so very proud of you two!