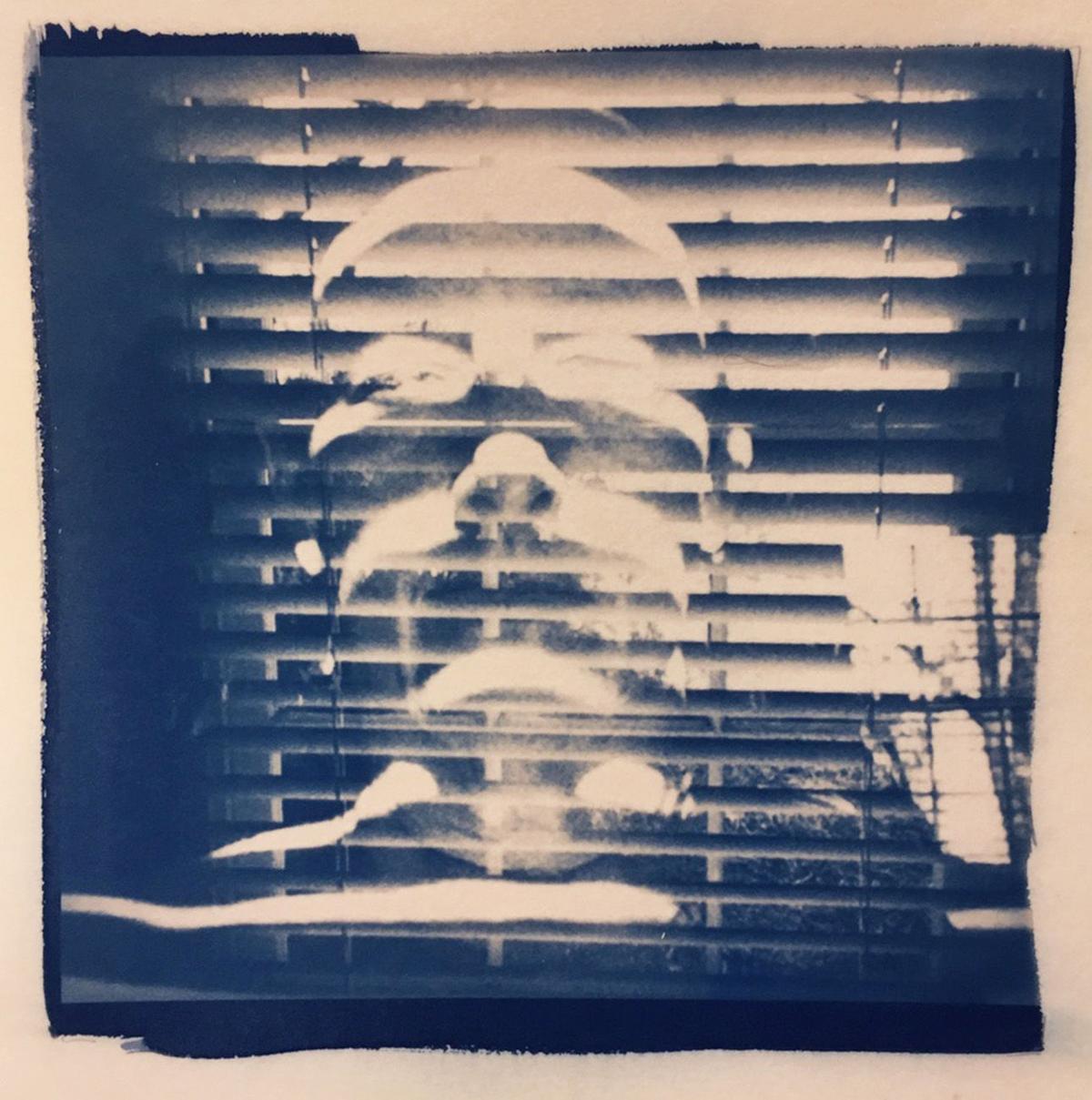 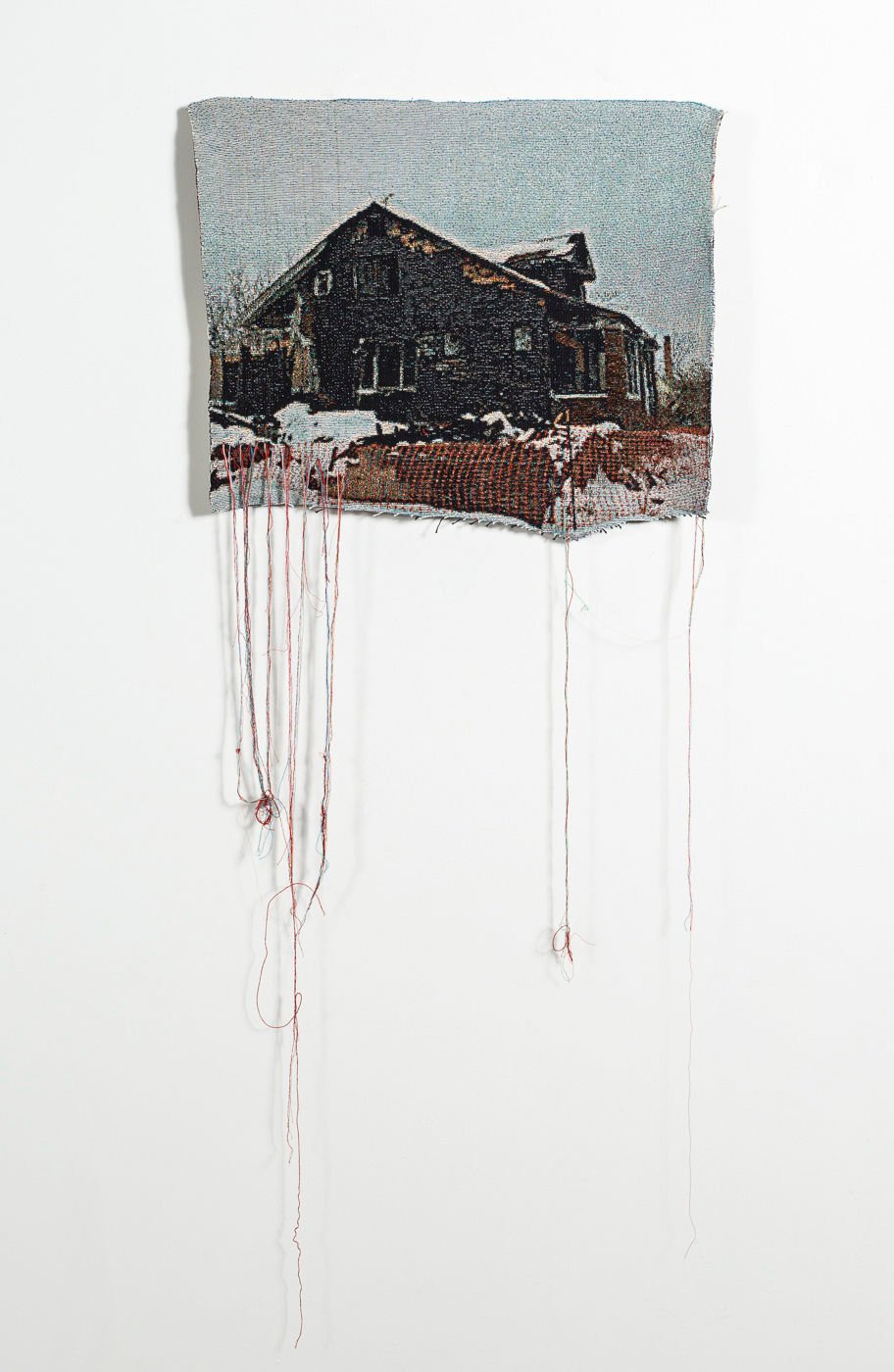 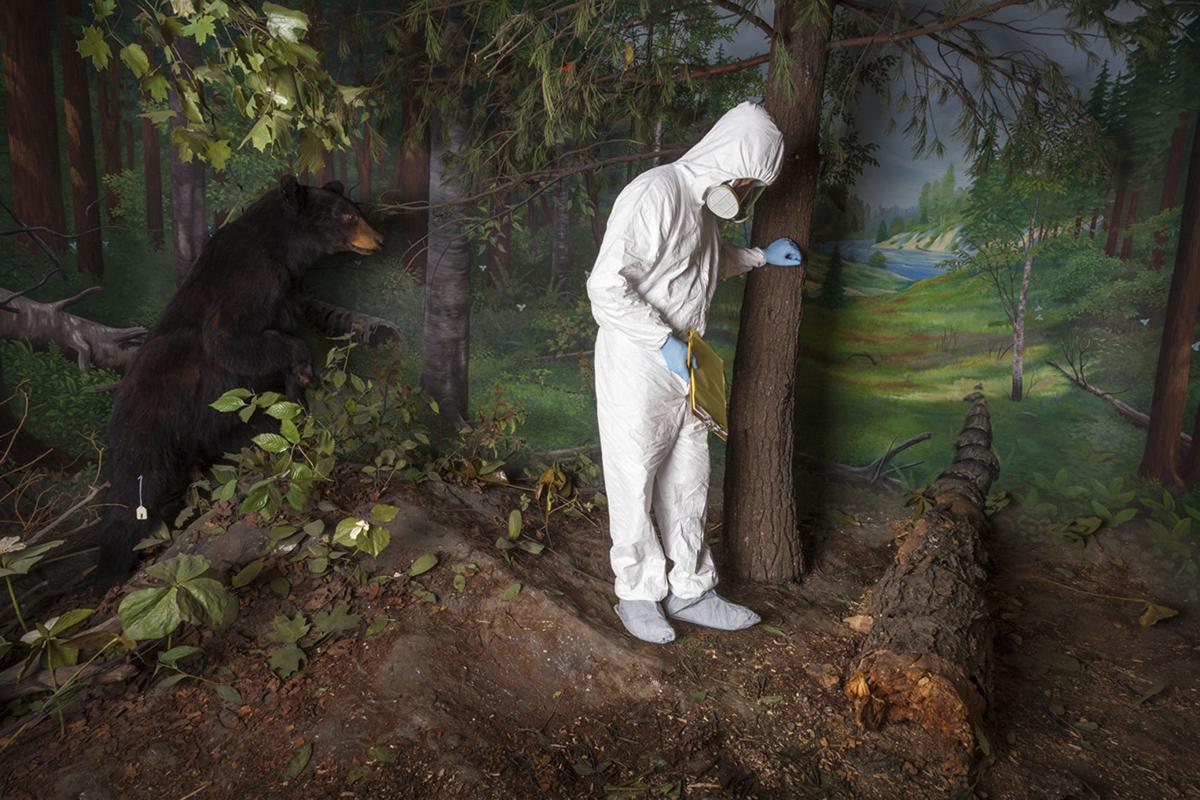 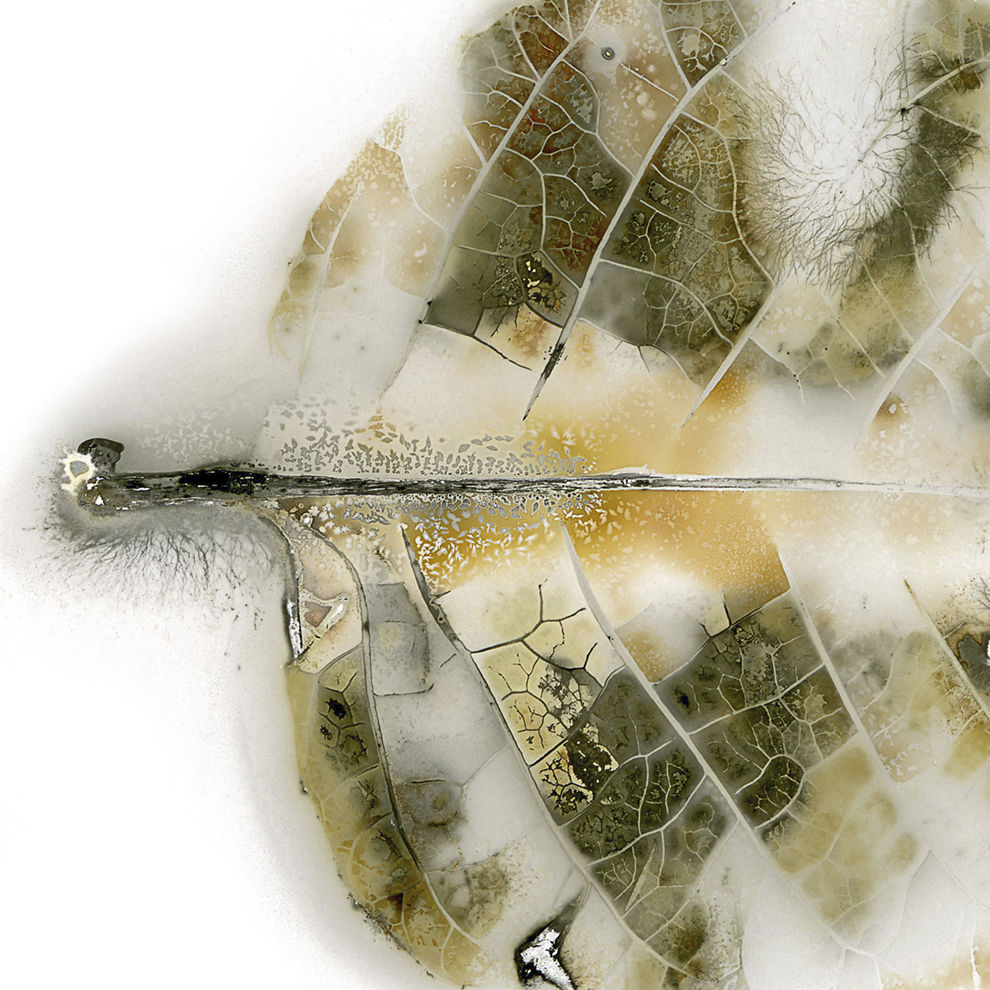 There are times when we just don’t want to leave our rooms, when the safety and security of self-isolation are preferable to facing the challenges the world throws our way. That’s how it was for photographer Heidi Cost when she was providing daily care to her mother. “I would retreat into the bedroom, and that was the only place where I could be creative in my house, because it had been kind of taken over by this person who was very, very ill,” says Cost, one of 25 artists whose work is among 35 photographs in the exhibition Fractured at Photo-eye Gallery. “There was a real fractured feeling for me, between nurturing my mother and wanting to desperately escape from the situation. The last of my kids had left home, and I was just faced with this combination of emptiness and mothering my mother.”

Cost’s only photograph in the exhibition, 2019’s Escape Through the Window, is a nebulous double-exposed self-portrait, lacking the detail necessary to make her features recognizable. In it, a face appears at a window, her eyes hidden by the shadows cast by the blinds. It’s a haunting portrait that evokes a sense of melancholy and a feeling of being trapped.

Cost, who lives in Santa Fe, created the double exposure with her iPhone and then made a digital negative, which she printed on a type of transparent film called Pictorico. The digital negative was then contact-printed on light-sensitive paper by direct exposure to UV light, resulting in a cyanotype. “I started doing film photography when I was 15,” says the 62-year-old photographer. “My dad gave me his old Leica camera. He said to put it at f/8 and just go out and shoot. That’s what I did. I ended up being a fine arts major in college. Then, more recently, I started getting into alternative processes: cyanotypes, platinum/palladium, kallitypes, albumen prints. I have my own darkroom.”

Fractured, which is the gallery’s first international juried exhibition in its 40-year history, opens Friday, Feb. 28.

Others artists in the show work with alternative processes, including stitched photography, platinum prints, silver gelatin prints, and even deconstructed woven photography. But the exhibit isn’t necessarily intended as a showcase for these diverse mediums. It’s driven by the theme of fracture, whether that relates to environmental concerns (such as fracking), the divisiveness infecting political discourse, or more subjective interpretations of fragmentation or breakage.

“We really encouraged people to have an open interpretation of that,” says gallery director Anne Kelly. “Of the work that was accepted, it’s a pretty wide range of that, from images of the Earth literally being fractured to more psychological takes on the theme.”

After putting out an international call for entries in November, Photo-eye received submissions from about 500 artists on the online platform CaFÉ, which was set up for Kelly, gallery owners Rixon Reed and Vicki Bohannon, and two associates to begin blind-judging the work. “It was a really different experience for me, in terms of putting an exhibition together,” Kelly says. “Usually, I’m either starting with an artist or an idea and building from there. It was our first time doing it, and we weren’t really sure what the turnout was going to look like.”

Photo-eye started in 1979 as a mail-order book business that Reed and Bohannon ran from their home in Austin, Texas. They moved to Santa Fe in 1991 and opened a walk-in location, Photo-Eye Bookstore, on Garcia Street. “Naturally, it made sense to want to show photographic prints on the wall,” Kelly says. “A year or two later, the gallery needed its own physical space.” The second location, Photo-eye Gallery, opened in 1993 in the same complex as the bookstore, which has since moved to Rufina Circle. The gallery is now located on Guadalupe Street.

The juried exhibition represents an eclectic confluence of photographic techniques by artists at all stages of their careers. The show includes works by Edward Bateman, whose Leaf No. 39C2 (2017) is an ephemeral detail of a fragile, decaying leaf set against a background of luminous white that accentuates its deteriorating form and brings its veined structure into vivid focus. Also included is Lauren Davies’ Detroit House 2 (2019), which depicts a woven tapestry printed with a photographic image of a deteriorating home. The tapestry is partially unwoven, which makes the graphic display of disintegration that much more palpable. The work refers to the Detroit housing crisis, with foreclosures leading to severe urban blight. In Jo Ann Chaus’ Shutters (2019), a woman in a vintage lace-collared dress, her face a mask, stands in a darkened bedroom illuminated by the faint light from an unseen window. Virgil DiBiase’s sorrowful black-and-white photograph 1000 Pieces (2019) depicts an old woman seated at a table laden with the disassembled pieces of a puzzle. DiBiase’s platinum print is part of a series called Dementia Portraits and Perception. In light of that, the fragmented puzzle becomes a metaphor for the woman’s state of mind.

Despite the mournful tone of many of the images in Fractured, particularly those that reflect the psychological states of their subjects, there are works that convey an appealing allure. Among these are Christine Lorenz’s Untitled (Salt/Fractured 1) from 2020, which captures the prismatic, geometric structure of a grain of salt in micro, and Kelly Cowan’s Apples (2019), in which the fruit, split in two and captured in tones of green and gold, glows with a light that seems to emanate from its core. “Apples is an interesting piece because it has a contemporary graphic quality that is unusual for an old photographic process,” Cowan says.

The camera-less image is a lumen print, a type of contact print made using available light. It is, essentially, a solar photogram in which an image is made directly on black-and-white, light-sensitive paper. “Seeing the colors that black-and-white photo paper produces is like the magic I use to feel in the darkroom when an image would start to emerge in the developer,” she says. “The work is a sun X-ray.”

Cowan, like Cost, is one of three New Mexico photographers whose work is featured in Fractured. The other is Marie Maher, who lives in Placitas. On the whole, Maher’s photography has a dreamlike quality and depicts open-ended narrative imagery that seems culled directly from the realm of the subconscious. In Highway 41 (2019), for instance, the spectral form of a woman in white stands on the side of the road at night. Illuminated from the glow of a car’s headlights, her features are blurred by the movement of the passing vehicle. “My work does tend to be dark and sort of haunting,” says the 58-year-old Maher. “It’s part of a series I’m working on right now, which is all going to be people shot through car windows. I want to get the motion of the car, mixed with the action of whatever is happening on the street, in a way that makes people wonder what’s happening.”

The photograph is an archival pigment print, mounted on board and coated with a gel medium that lends it a soft, luminous quality, reminiscent of encaustic. As with other artists’ work in Fractured, the process only adds to its otherworldliness.

While the word “fractured” calls up images of dissonance and broken things, the work in the exhibition runs the gamut from the sublime beauty of the unexpected to moments that reflect shattered lives and devastated landscapes. It’s a reminder that art persists and artists act as witnesses and interpreters of the state of things, in dark times and in light. ◀