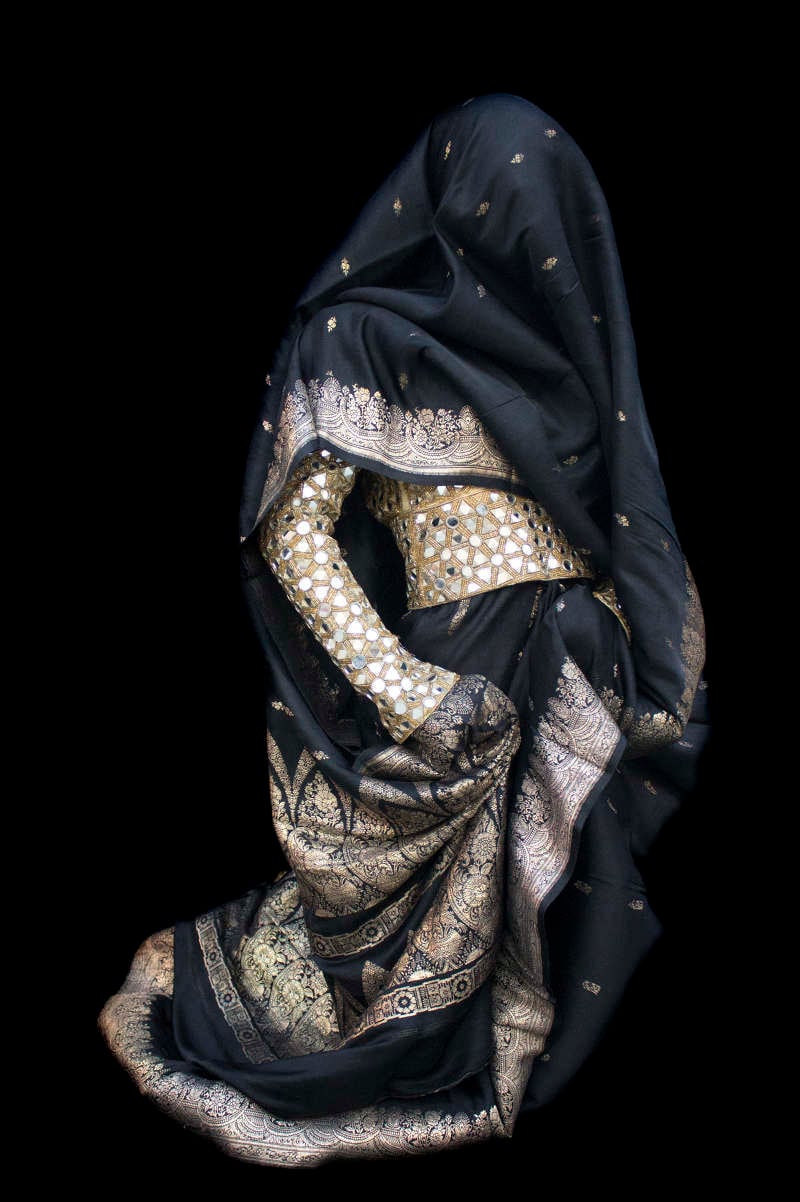 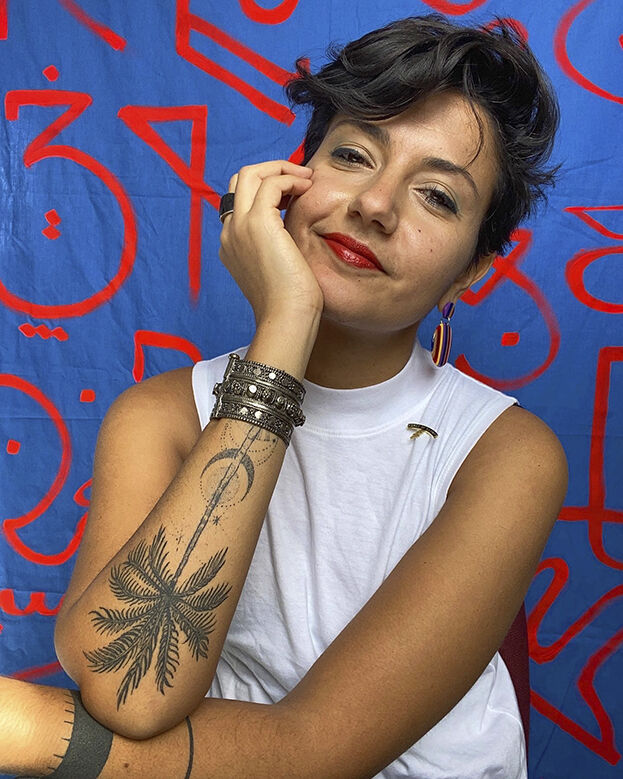 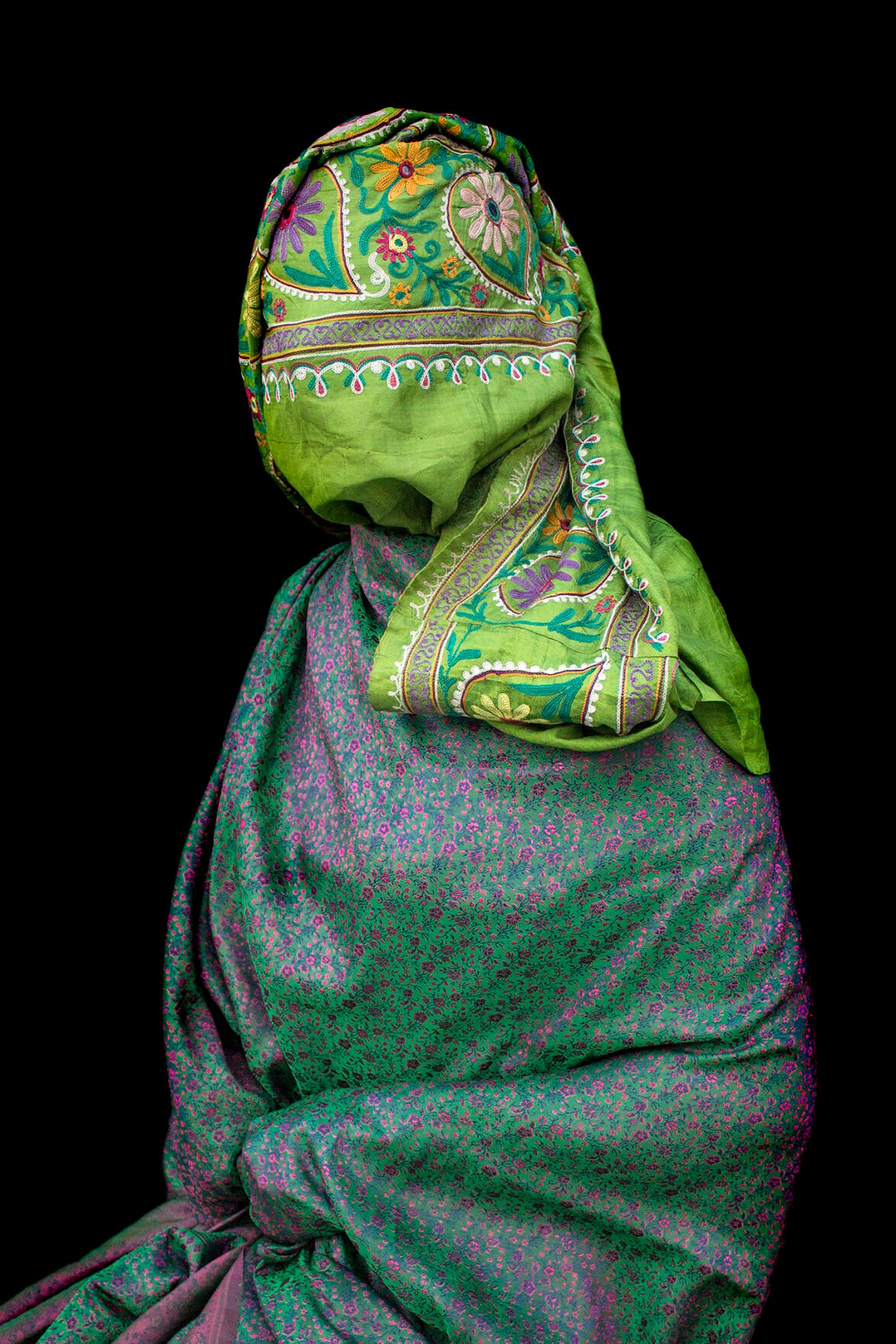 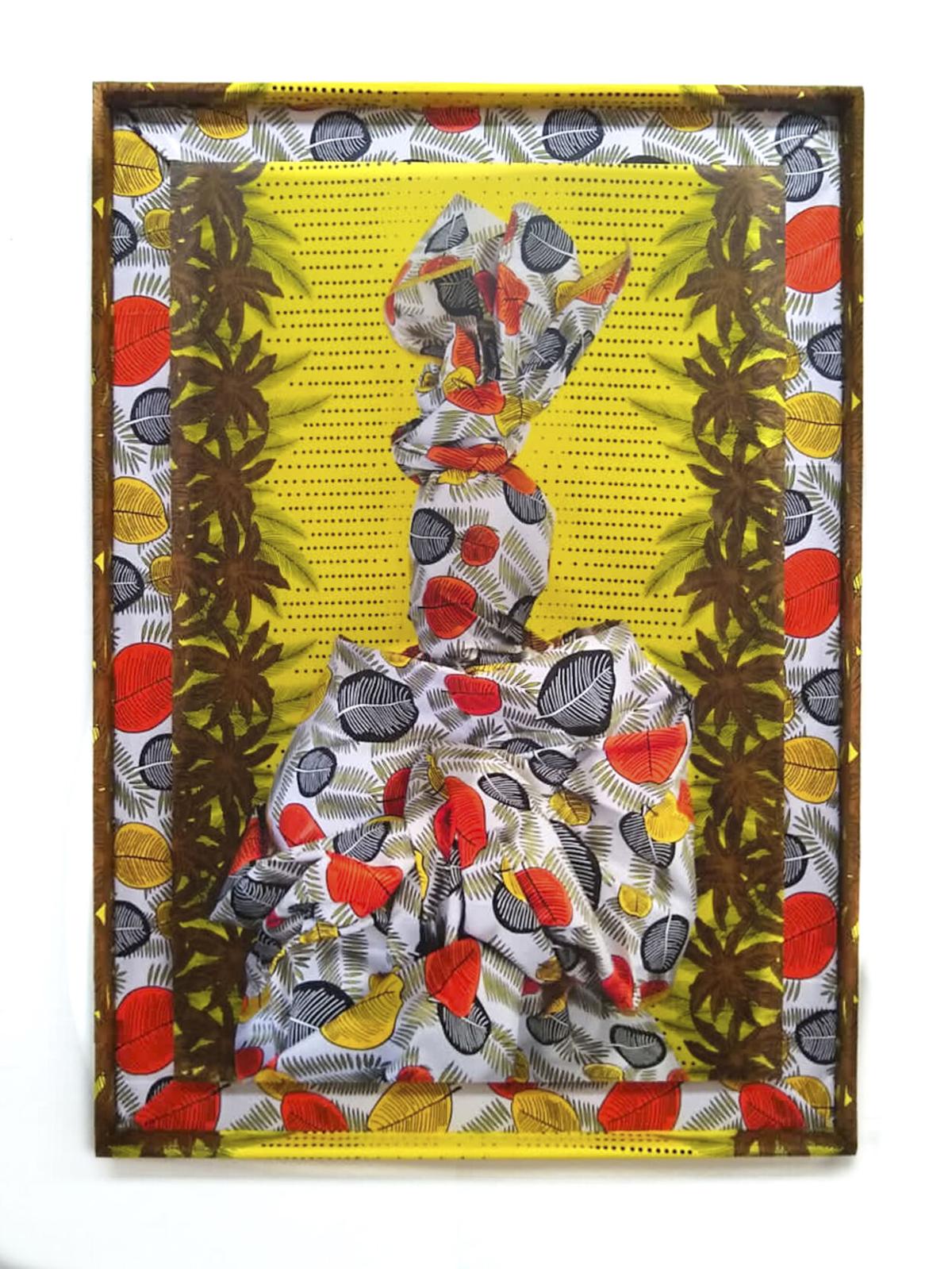 A solitary figure, her face shrouded by a dark-colored sari — deep blue, perhaps dyed with indigo — and accented by gold thread, moves against a backdrop of solid black. Her bodice is made of gold thread and decorated with round and triangular mirrors. She appears to be dancing. Or maybe, like a warrior, she’s marching off to war.

The image, from Yemeni-Bosnian American multimedia artist Alia Ali’s BORDERLAND series, is dramatic, majestic, and commanding. But it might surprise you to know that the person beneath these resplendent garments is a shy, 13-year-old girl and not some royal sovereign, as her regal bearing suggests.

But, for a short time, on the rooftop of a modest home in Udaipur, she was a queen.

Her name is Prithi, and Ali met her when she came to Udaipur as part of her ongoing project, which has brought her to 11 different regions of the world, where she primarily photographs masters of textile arts draped in their own creations.

“I became friends with this family,” says Ali, who’s in her mid-30s. “They used to be textile makers, and they had a really beautiful collection that they inherited over centuries. I went up to their rooftop and, together, we set up all the fabrics. This dress is hand-done. It’s exquisite. But it really needed a smaller body that wasn’t a man.”

With her family’s permission, shy young Prithi agreed to don the dress for the photoshoot.

“When she got under there she transformed,” Ali says. “It ended up becoming one of the strongest photos in the entire series. When I turned around there were all these different people on these rooftops watching the photo session. Prithi captured everybody. It kind of makes me emotional. It wasn’t a particularly wealthy place at all, but there was such majesty there.”

The works in BORDERLAND challenge preconceived notions of the separation between peoples and honors their differences. It emphasizes the beauty and wealth of the work of textile makers and their rich visual vocabulary.

“Border” is often a loaded term that can suggest a distinct barrier — between nations, people, and land, as well as in more esoteric ways — but borderlands are different, she says. They’re fluid and transparent, encompassing regions of interaction between people who’ve ostensibly been separated by political boundaries over which they have little or no control.

“I think borders are something very colonial,” Ali says. “How do borders exist? Our village was on the border of what was north and south Yemen. Why was it north and south Yemen? Because the Ottomans drew it in one way, and the British drew it in another way. One of them became an imamate and then a republic. The other was ruled by the British and then became socialist. These are imposed governments and ways of governing and delineating power and resources for others. We lived on this borderland.”

Ali, who’s originally from Yemen and Bosnia and currently lives in Los Angeles, is in New Mexico as a visiting artist, attending the Roswell Arts Foundation’s Roswell Artist Residency. In Yemen, she was from the south but raised in the north. She comes from the mountain people in the highlands, where natural borders like a river or a mountain once served to delineate one’s territory.

“What does it mean to even exist in all of that?” She asks. “Once the borders shift, sometimes over months and sometimes overnight, your allegiance is supposed to shift too. So, what is nationality?”

For Ali, who has lived in seven different nations and visited dozens more, nationality has little meaning. But one’s connection to place does. And that’s a crucial aspect of why she works with textiles and textile masters for BORDERLAND.

“I’ve been practicing art as an independent artist since 2015. This was one of the first projects that I’ve done. I was living in Morocco. I used to be the director of the Marrakech Biennale, so it was kind of a shift from going from art admin to deciding that I wanted to be an artist.”

It was in the summer. The temperature was a sweltering 120 degrees, and Ali, dissatisfied with her job, began photographing herself at the suggestion of her mentor, Moroccan-born contemporary artist Hassan Hajjaj. She took self-portraits, wrapped in the many textiles from her own collection. The series, Cast No Evil, was featured in the 2015 group exhibition Shades of Inclusion, sponsored by the Boston-based organization Arts Connect International.

Like the images in the BORDERLAND series, the figures in Cast No Evil, despite being self-portraits, are shrouded in fabrics and appear anonymous. The project became a way of exploring the relationship between photographer and subject, or the observer and the observed. “I wanted to be on both sides of the fabric, if you will, or on both sides of the curtain, and kind of give up any control I had of the image, because I couldn’t see it. In some cases, I took over a hundred photographs until I got the one that I wanted.”

In 2016, Ali came to the United States on a stipend she received from Arts Connect International. She wanted to visit New Orleans, which she regards as a rich center of textiles and costumes. The primaries between presidential candidates Hilary Clinton and Donald Trump were getting underway and, she says, “I was really horrified by the bigotry that was coming to the surface. One of things that came up during the primaries was Trump saying these horrible things about Mexicans and all kinds of other groups, which is not worth repeating. That really struck me because I had always known parts of Mexico to be some of the richest places in textile.”

Mexico was also the nation that Trump sought to separate with a visible partition, a wall, further driving home the notion of “us” and “them,” which became a controversial issue during his presidency. For Ali, Mexico was where her BORDERLAND project really began. But wherever she traveled — whether it was Mexico, or the borderlands between Laos, China, and Vietnam — she had a self-imposed mandate that governed the form the project would take.

“The conditions that I set for myself was that the fabric had to be made there, that it was natural, and that it was of that land.”

Fabric, she says, has the potential of creating a shield. It protects the wearer. It creates a border between the observer and the observed. But, in the same way, it also proclaims that a painting serves to say something of the painter.

There’s a mystery inherent in BORDERLAND. Who is beneath these patterned and decorative fabrics? Are they figures to be feared or embraced?

The black backgrounds offer the viewer no identifiable setting, no scenery, just as there is no rooftop with gazing onlookers captured in her image of Prithi.

Instead, the viewer must confront the figures on their own terms, each one identified solely by dress, which encompasses the rich pasts, presents, and futures embedded in living textile traditions.

“Text came after textile,” she says. “Textiles are these woven histories. They serve as documents. And different communities in different parts of the world communicate through them.” ◀

Beautiful! Thank you. Is this on display in NM somewhere? (btw, I think she deleted that page from her website)